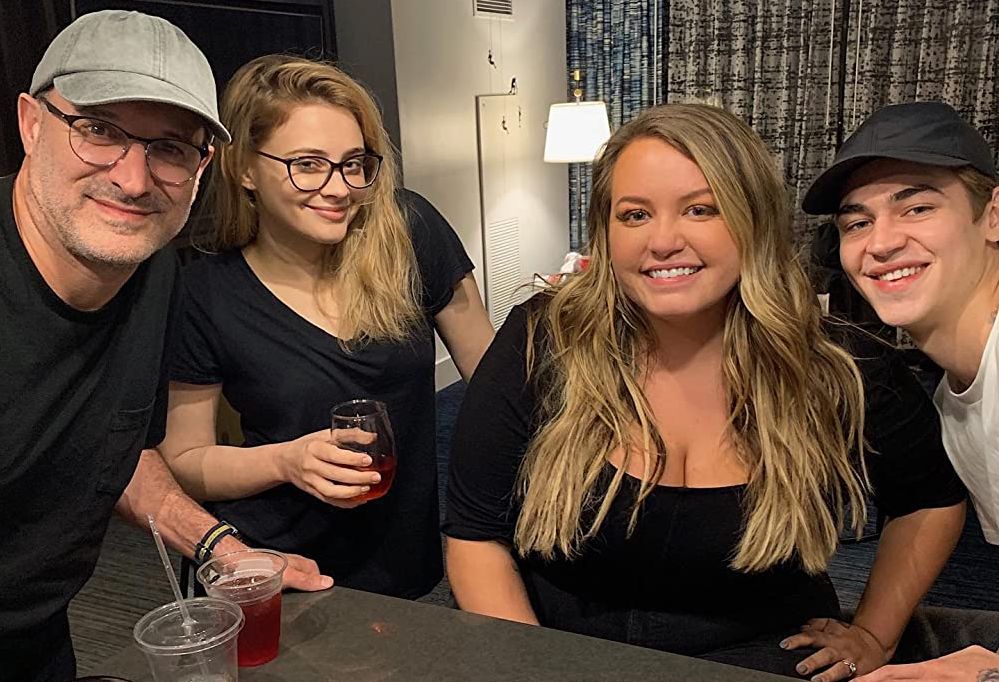 Following the breakout success of After, producers quickly got to work on After We Collided, this time with New York Times bestselling author Anna Todd penning the script in her debut as a screenwriter.

“Writing the script for After We Collided has been an amazing experience,” says Todd. “I wrote After We Collided when I was in my early twenties, and although I got to revisit After as a producer, turning my second novel into a script was a completely different journey.”

After We Collided is the film adaptation of Anna Todd’s best-selling novel After We Collided, which is the sequel to her best-selling novel After, which became a publishing sensation after beginning as fan fiction on the social storytelling sharing platform Wattpad. The After series includes five books from Todd that have been read more than 1.5 billion times on Wattpad. The Simon & Schuster imprint Gallery Books have published four books in the series that are now available in 40 countries.

The first film in the franchise After, debuted number one at the box office in 17 international territories including Germany and Italy when released in April 2019 and has since grossed over $70M worldwide. Read more

Hardin Scott (Hero Fiennes Tiffin) and Tessa Young (Josephine Langford) go through the aftermath of their breakup. While Hardin falls into some bad habits, Tessa, armed with a new confidence, lands the internship of her dreams at Vance Publishing Company. While at Vance, she also grabs the attention of her handsome new co-worker Trevor (Dylan Sprouse), who is exactly the kind of guy she should be with. He is smart, funny, handsome, and responsible; however, Tessa cannot get Hardin out of her head. He is, after all, the love of her life. Even with all their misunderstandings and hardships, Tessa can’t deny the pull she feels towards Hardin. She wishes she could walk away…it’s just not that easy. Through all their ups and downs, the wrongs and rights, Hardin and Tessa will fight to be together… even if the universe wants them to be apart.

Todd, along with her fellow producers, tapped veteran director Roger Kumble, who achieved icon status as the writer and director of the cult classic Cruel Intentions starring Sarah Michelle Gellar, Ryan Phillipe and Reese Witherspoon to helm the next film, ushering the franchise into a new, more worldly realm that echoed the themes of the book series. “Not only have I gotten a chance to see After We Collided with fresh eyes, but I also got to revise the script with the director, Roger who has over twenty years of experience in filmmaking.”

Kumble was immediately drawn to the project, setting out to take the franchise to moody, new heights.

“It’s a sequel, but it’s a completely different tone,” says Kumble. “The first movie was very poetic. This one is more of a thrill-ride. I asked Anna what she envisioned the tone of the film to be, and she says Cruel Intentions. I thought, ‘I think I will get this job’.”

Ever in service to the passionate fanbase, known as ‘Afternators’, Todd and Kumble made dedicated efforts to ensure the film resembles her original novel as closely as possible.

“I know my readers around the world will love this latest evolution of Tessa and Hardin’s story, which shows the characters they love in a new and evolved way since they’ve last seen them. We find them more in the space of ‘like the book’, as opposed to the first movie.”

“The most important thing to me is that I remained faithful to the book,” agreed Kumble.

“The book is a worldwide phenomenon. Anna Todd is my partner on this, so she is involved in every decision. Anna was on set everyday as a producer and as the author, so she could make sure they were sticking to the book, representing the characters accurately and giving the Afternators what they want and what they have been asking for. Having the creator of it all who can answer questions that are not even in the book really allowed the actors and the director to get deeper into the characters.”

With the vision in place, Kumble brought in frequent collaborator, Larry Reibman as Director of Photography. “One of the most important things to me was that I had my DP with me, who I worked with for eight seasons on “Pretty Little Liars”,” says Kumble.  “He shoots actors beautifully and quickly.”

After We Collided sees the return of troubled couple “Hessa” to the big screen, deeply changed by their experiences in the first film, After. Todd says the first film left the couple reeling from their deep rift. “We are just starting with Tessa and Hardin apart and trying to move on,” says Todd. “Tessa is trying to move on with her life and Hardin is not, and not even capable of doing that.”

Tessa is no longer the innocent, inexperienced college freshman audiences met in After notes Langford. “Since we first met Tessa, she has fallen in love, she has had an intense break up, she has a new internship in a publishing company (Vance Publishing) and is immersing herself in a world with adults,” says Langford. “She goes to a club for the first time…she’s a lot more experienced in certain ways, jaded and mature. Just a totally different girl when we see her in this film. Producers also wanted that maturity to reflect physically on screen, updating Tessa’s hair, makeup and style.”

Hero Fiennes Tiffin returns as bad boy Hardin Scott, but he too has been irreversibly altered by the pair’s tumultuous relationship. “There has definitely been some evolution in between the first and second movie that we kind of recap on, but a lot of his evolution is shown in this sequel,” says Fiennes Tiffin of his character. “We get the opportunity to explore his past a lot more, get inside his head a bit more, so I think throughout the second film we will see the true evolution of Hardin. We are now showing that to the audience in a way we didn’t do on the first movie.”

Producer Jennifer Gigot echoes this sentiment. “We are definitely getting much more into Hardin’s backstory in After We Collided, so then you understand why he is the way that he is, why he made the infamous bet from the first film; his demons, his struggles. What we are doing is really peeling back the layer of who Hardin Scott is, while also showing how Tessa has evolved and changed from having had this experience and experiencing her first love.”

Director Roger Kumble set out to take the drama of ‘Hessa’ to new heights in After We Collided. “We want to take the audience in an emotional roller coaster with this movie,” says Kumble. “The combativeness between Tessa and Hardin in that passion is basically an addiction where, no matter what they do, they can’t stop thinking about each other. In this sequel, we as an audience keep questioning: how much drama can we throw at these two people? The fact is that there are so many unanswered questions, and the movie answers most of them possible; but in real life, we don’t get the answers to all our questions. That’s why in After We Collided, we have an accurate representation of what it’s like to be in a relationship without having all of the answers and that is what makes it so interesting and relatable.”

Gibgot agrees, adding that the back and forth between Tessa and Hardin is what continues to capture the imagination of enthralled Afternators. “I think it is the ultimate wish fulfillment story, honestly, in a lot of ways. I think for girls, they want to be Tessa who changes the bad boy. For boys is the idea that you can get this beautiful innocent girl to fall in love with you no matter how damaged you are.”

Afternators – doing it all the for the fandom

Anna Todd is the New York Times bestselling author of the After series of books, The Spring Girls, and The Brightest Stars. Always an avid reader, Todd began writing stories on her phone on Wattpad, the reading and writing multiplatform for original stories, with After becoming its most-read series with over 1.5 billion reads.The print edition of After was published in 2014 by Simon & Schuster and has since been released in over 30 languages with more than 11 million copies sold worldwide. After has been a #1 bestseller across the globe including Italy, Germany, France, and Spain. She has since written eight additional novels and serves as a producer and screenwriter on the upcoming film adaptation of After We Collided, the sequel to After. Todd has been hailed by Cosmopolitan as “the biggest literary phenomenon of her generation”. A native of Ohio, Anna, her husband, and son currently live in Los Angeles.

Todd is highly engaged with her fandom, known as Afternators, and was involved in every single aspect of the production to deliver them a film as close to the beloved novel as possible. “I approved everything – every outfit, hairstyle, makeup look, tattoo, tattoo placement,” says Todd. “Pretty much everything they had a question about they would come to me. I have a very special relationship with the readers, that as a reader growing up I’ve never had with an author, and I want the fandom to know that I am always listening to them and that I am always here for them. It’s hard to find that “magic” and I am just so fortunate, lucky, and grateful to have that in something that I created.”

Langford agreed adding, “I think we are just really lucky that we have such a huge and passionate fanbase who are really the reason why we are here and making a sequel. There are just so many people out there who connected to these books and to the story and the first film.”

New to the franchise,Sprouse had his first taste of the Afternators following his casting announcement. “I didn’t realize how much of a fandom I was getting into in truth until the announcement came out and it was like wildfire,” says Sprouse. “I find that really fun because I also found it as an opportunity to learn more about my character, the things that people were talking about for Trevor or the things they particularly remember, which gives me a good direction to go off and work them into the movie.”