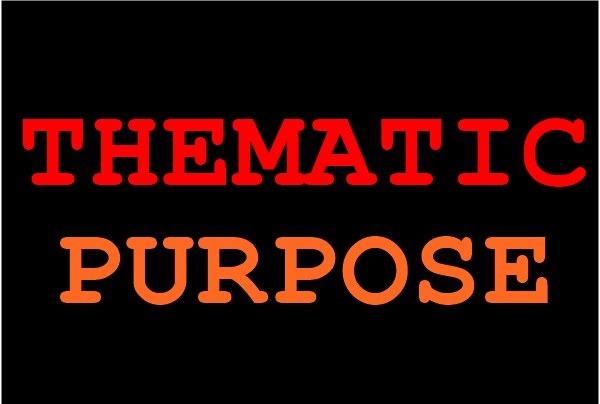 Until you know what you are trying to say, your story isn’t complete

The writing process is a search for meaning, a theme, what the story is really about, what gives it meaning and a purpose for being, besides making millions of dollars for stars and movie studios.

The theme is a unifying idea or motif, repeated or developed throughout a work.

Once you have something you want to write about (Idea), defined the Premise and Concept, and know what your genre is, you need to know what the intention, objective or controlling idea – theme – of your story is.

You have to have a clear understanding of what story it is you are trying to tell.

A good analogy is trying to sweeten a glass of ice tea. Mix regular sugar and it will sink to the bottom, making it bitter except for the bottom, which will be too sweet. Try it with Equal, and the tea will be sweet throughout. Sweetness is your message, and it must be completely diluted to disappear into the beverage of entertainment. Karl Iglesias, The 101 Habits Of Successful Screenwriters

All great writing is about something

Professional writers do not commit several years to a story unless they have something to say.

Because writers are great observers and often sensitive souls, successful screenwriters are able to recognise and offer insights into the human condition.

Great stories have powerful themes, but they are told in an entertaining way.

So what exactly is theme?

Examples of themes from groundbreaking films:

In Jaws a young woman is killed by a shark while skinny-dipping near the New England tourist town of Amity Island. The police chief Martin Brody wants to close the beaches, but mayor Larry Vaughn overrules him, fearing that the loss of tourist revenue will cripple the town. Ichthyologist Matt Hooper and grizzled ship captain Quint offer to help Brody capture the killer beast, and the trio engages in an epic battle of man vs. nature. Theme: Nature is still bigger than you

In The Sixth Sense Young Cole Sear is haunted by a dark secret: he is visited by ghosts. Cole is frightened by visitations from those with unresolved problems who appear from the shadows. He is too afraid to tell anyone about his anguish, except child psychologist Dr. Malcolm Crowe. As Dr. Crowe tries to uncover the truth about Cole’s supernatural abilities, the consequences for client and therapist are a jolt that awakens them both to something unexplainable. Theme: Guilt versus redemption

In Chinatown Los Angeles private eye J.J. “Jake” Gittes is hired by Evelyn Mulwray to investigate her husband’s activities, he believes it’s a routine infidelity case. Jake’s investigation soon becomes anything but routine when he meets the real Mrs. Mulwray and realizes he was hired by an imposter. Mr. Mulwray’s sudden death sets Gittes on a tangled trail of corruption, deceit and sinister family secrets as Evelyn’s father becomes a suspect in the case. Theme: Decency is not enough to defeat corruption

Braveheart tells the story of the legendary thirteenth-century Scottish hero named William Wallace who rallies the Scottish against the English monarch and Edward I after he suffers a personal tragedy by English soldiers. Wallace gathers a group of amateur warriors that is stronger than any English army. Theme: Freedom is worth dying for

Widely regarded as one of the greatest films of all time, the mob drama The Godfather, based on Mario Puzo’s novel of the same name, focuses on the powerful Italian-American crime family of Don Vito Corleone. When the don’s youngest son, Michael, reluctantly joins the Mafia, he becomes involved in the inevitable cycle of violence and betrayal. Although Michael tries to maintain a normal relationship with his wife, Kay, he is drawn deeper into the family business. Theme: Family is the most important thing

Star Wars is an American epic space opera franchise, centred on a film series created by George Lucas. It depicts the adventures of various characters “a long time ago in a galaxy far, far away” Theme: Faith can defeat empires

In Darren Aronofsky’s The Wrestler ageing wrestler Randy “The Ram” Robinson is long past his prime but still ready and rarin’ to go on the pro-wrestling circuit. After a particularly brutal beating, however, Randy hangs up his tights, pursues a serious relationship with a long-in-the-tooth stripper, and tries to reconnect with his estranged daughter. But he can’t resist the lure of the ring and readies himself for a comeback. Theme: The downward spiral of a man who desperately wants to live a life he has never known, a life outside fame, an ordinary life outside his extraordinary existence.

Explore the theme of your story fully with The Write Journey