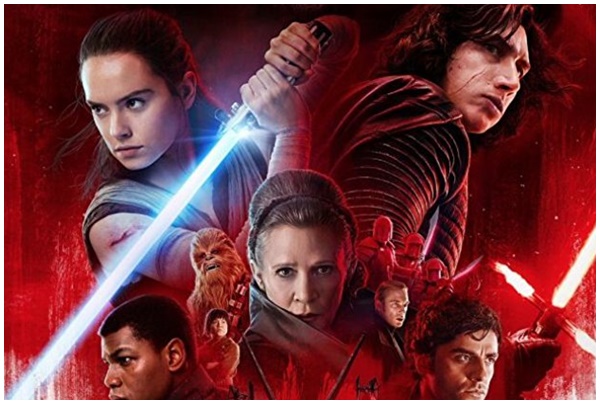 The Last Jedi: A Gorgeous, Surprising and Conflicted Entry, Which Elevates the Star Wars Sequel Trilogy.

Two years ago, J.J. Abrams’s The Force Awakens set up the long-awaited new Star Wars trilogy in an uneven and divisive way. On the one hand, it introduced a wealth of intriguing new characters with mysterious backstories and reunited viewers with a number of truly beloved characters from the original trilogy. On the other, the plot opted for an unimaginative rehashing of the events of A New Hope rather than forging a unique path. Starkiller Base remains the dullest idea in the entire franchise by a significant margin.

Nonetheless, the film left a number of lingering questions that served to invest fans in this new set of films. Who are Rey’s parents (and why is she so damn good at everything)? Why is her path seemingly tied to Kylo Ren? Who is Supreme Leader Snoke? Why is Luke Skywalker in hiding and what happened at his ill-fated Jedi training academy?

The good news is that new entry The Last Jedi (written and directed by Rian Johnson of Looper fame) is far more than just Empire Strikes Back Lite. In tackling these lingering questions head-on, the film goes in a number of surprising and unexpected directions and certainly has its own distinct personality. It’s undoubtedly the most visually stunning Star Wars film, gorgeous to look at, carefully composed and never overcrowded (a problem which plagued the prequel trilogy).

Familial legacies have been a recurring theme throughout the entire series and Last Jedi’s inheritances from Force Awakens are both a blessing and a curse. The Rey/Kylo Ren arc is a fantastic addition to the series’ lore and The Last Jedi is at its strongest when developing this relationship. It’s very much the centerpiece of the new trilogy, striving for a more nuanced look at the ideas of the light and dark side of the Force. Throughout The Last Jedi Luke Skywalker in particular offers some striking insights into this discussion.

While remaining the high point of the story, the Rey/Kylo Ren/Luke plot also feels removed from the First Order/Resistance stuff; which continues to be undercooked. The other characters (such as Poe Dameron and Finn) are constantly forced to engage in increasingly convoluted and tenuous hijinks for the sake of maintaining a greater conflict B-story and the threadbare nature of the Resistance/First Order fight becomes glaringly apparent.

What’s ultimately frustrating about this aspect of the new trilogy is the lack of a clear purpose. We know that the First Order want to topple the New Republic that was established after the Empire’s defeat in Return of the Jedi, but there’s never a clear indication of who they actually are and what the scale of their operation is. The same is true of the Resistance. Are they just two minor factions playing dress-up and reenacting the past or is there something greater at stake here? Barring the planets that were destroyed by Starkiller Base in Force Awakens, the rest of the galaxy seems willfully unconcerned with their squabble.  Both factions keep trying to establish their cred as bona fide Empire and Rebellion and come off wanting.

In amongst all of this factional stuff, one area where The Last Jedi utterly excels is in solidifying Luke and Leia’s continued presence as series elite. Jonson is clearly smart enough to know that it’s not enough just to drop in iconic characters, they need to stamp their mark on the ongoing narrative and both characters deliver. Gone is the self-consciousness that hung over the returning characters in Force Awakens, both solidify themselves as crucial parts of the ongoing story. It’s clear in a sense that this new trilogy was partially envisioned as being Leia’s story and it will be interesting to see how this is shifted by the tragic and unexpected death of Carrie Fisher last year. As it stands, her performance here is one hell of a swansong, adding unintended pathos to many of her lines.

Picking up from the literal cliff-hanger of the previous film, Mark Hamill’s return to the series is a triumph from the get go. It was never going to be an easy task to justify why Luke abandoned his loved ones and allies, and went into hiding and The Last Jedi absolutely makes his questionable turncoating work. As the devastating catastrophe at his Jedi academy (which saw Ben Solo turning into Kylo Ren) is revealed, we are consistently reminded of why Luke Skywalker is the most fallible and human character in the franchise. Missed you young Skywalker we certainly have.

Aimed at being much bouncier and less bleak than last year’s standalone Rogue One (a film I still adore), The Last Jedi often becomes curiously meta; looking at the expectations that fans bring to a new Star Wars film and directly confounding them. There is a desire to assert that the universe is bigger than Skywalkers and Solos although it is ultimately unwilling to commit to taking this anywhere just yet.

The Last Jedi is a gorgeous and exhilarating ride that doesn’t feel like any Star Wars you’ve seen before. It’s full of gaping plotholes and half-baked ideas, but the core is resolutely compelling and the presentation, fresh and exciting. It contains a number of iconic moments, which are destined to standout as highlights of the franchise.