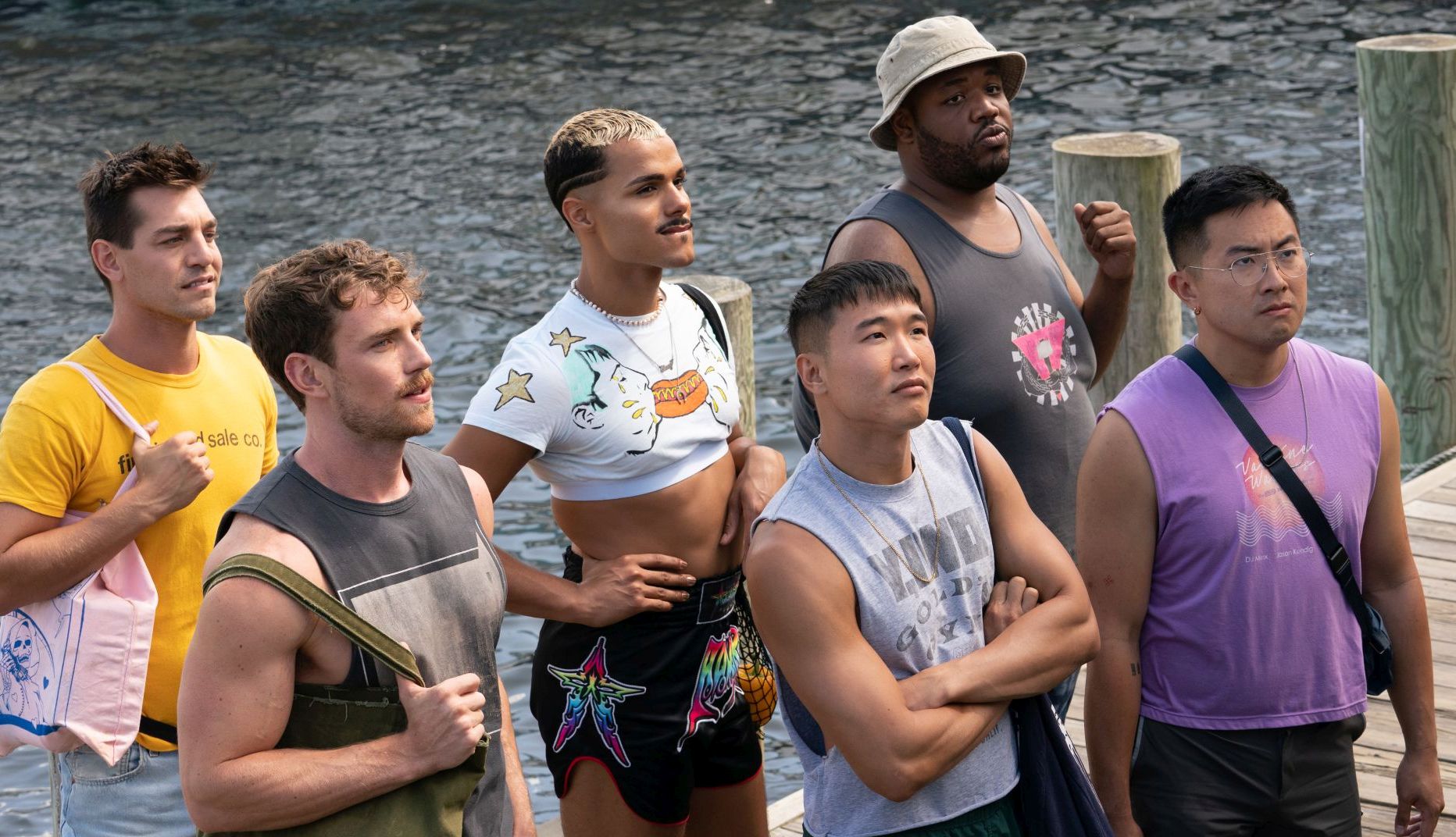 “Fire Island is my favourite place to be,” says writer, actor and stand-up comic Joel Kim Booster, a Chicago-bred, Los Angeles-based stand-up comedian, writer, and actor who was recently named as one of The Queer Young Comics Redefining American Humor by the New York Times.

“When I was still struggling to be a success working a day job that I hated and was miserable every day, oppressed by just how straight the rest of the world is, you could go there and you would explode because you could feel so free. You can carve out your own space and find the people that you vibe with.”

“It’s about identity and being comfortable in your skin. I think the family part is definitely just having people around you who support who you truly are. Good and bad.”

Producer John Hodges says, “The structure of the story and the narrative that Joel created is very finite. There is just such beautiful arcs between everything, including the exploration of family, and chosen family.”

“I love movies like Clueless and 10 Things I Hate About You—movies that have taken a classic text and updated them to a modern setting very effortlessly and seamlessly,” says Hodges. “What Joel did by grafting the commentary on social mores and politics and classism and putting it very specifically into Fire Island was very well executed. Within that was also a really funny script that has a great love story at the core.”

In Fire Island, Noah (Joel Kim Booster) and his boys, including best friend Howie (Bowen Yang), and their friends Luke (Matt Rogers), Keegan (Tomás Matos) and Max (Torian Miller), celebrate a week of non-stop partying and hooking up with hot guys. After arriving at the house on Tuna Walk owned by their friend Erin (Margaret Cho) where the group has always stayed, they’re greeted with unsettling news: Erin has run into financial trouble and will soon be forced to sell the vacation house they considered a second home.

Every summer, gay men, women and people representing all facets of the LGBTQIA+ community flock to the shores of Fire Island to relax, soak in the sun, party with chosen family, and perhaps even fall in love.

Stretching for 32 miles off the coast of Long Island, the island has served for decades as an invaluable place of refuge, offering vacationers a chance to build camaraderie away from the pressures of conforming to outside societal expectations.

The Fire Island Pines is a hamlet in the Town of Brookhaven, Suffolk County that has been referred to as America’s first gay and lesbian town. With the most expensive real estate on Fire Island, the Pines has approximately 600 houses and a 100-unit condominium complex on its square mile of location and is only accessible by water. There are no private vehicles in this part of the Island, no paved roads, and the cottages and beach are only accessible using a series of wooden boardwalks.

Now, the locale serves as the colourful setting for a one-of-a-kind retelling of Jane Austen’s classic Pride and Prejudice, adapted by and starring Booster, seeing single and carefree Noah embark on his annual trip to the island with his closest friends, but this time, he’s determined to orchestrate the perfect hookup for his lovelorn best friend Howie (Saturday Night Live star Bowen Yang). Howie quickly meets an ideal guy, Charlie (James Scully), someone with real relationship potential—the only problem is his insufferably aloof best friend, Will (Conrad Ricamora), to whom Noah takes an immediate dislike.

Determined to make what might be their last summer together in Fire Island especially memorable, Noah resolves to help lovelorn Howie find the man, or men, of his dreams. To prove just how serious he takes his mission, Noah promises Howie that he will remain abstinent until he succeeds (yeah, right). The week gets off to a promising start after Howie meets charming doctor Charlie (James Scully), and the two quickly hit it off. But the members of Charlie’s wealthy, accomplished social circle vacationing at their house on Ocean Walk seem to look down on Noah, Howie and their crew.

The idea of transporting Austen’s beloved Regency-era romance to modern-day Fire Island first occurred to Booster on his inaugural visit with a group of friends about 10 years ago. He had brought along a copy of the 19th-century novel, and as he revisited the tale of the turbulent courtship between the fiercely independent Elizabeth Bennet, the second of five sisters of modest means, and aristocratic landowner Fitzwilliam Darcy, he was struck by the surprising ways in which the book’s canny observations about class and society applied to his own surroundings.

“There is this other side of the island that is scary and alienating in a way—it is oppressively white and inherently classist,” says Booster, who is of Korean descent. “Once you’re here, it can feel very alienating if you’re a person of colour or you’re of a different body type. It’s funny to see how when gay men are together and we are the majority, how we discriminate and divide ourselves even further. I was like, I want to write a story about this.”

Seeing the concept of found family expressed so beautifully within the context of a raunchy wild comedy replete with illicit drugs, partying and sex also captured the imagination of Korean-American filmmaker Andrew Ahn, who was thrilled with Booster’s cleverly crafted script from the moment he read it. “I laughed out loud so many times,” Ahn says of reading the screenplay for the first time. “What I loved about the script was how funny it was, but at the same time how much heart it had. It was a real Trojan Horse for emotion and interesting themes about gay social class. It felt like it had a little bit of everything wrapped up in a delicious package, and really felt like something I wanted to be a part of.”

For Booster, Ahn was uniquely positioned to direct the film as he had lived some of the same kinds of experiences the comedian had tried to capture on the page. “There aren’t a lot of gay Asian people in this industry,” Booster says. “It was really important to me to work with someone who understood the core of this movie and the experience of Howie and Noah, and Andrew was that. He had such a beautiful vision for the movie—he knew the story, loved the story and wanted to tell it in a way that complimented my skill set. I don’t know if I’ve ever worked with someone that I’ve trusted more creatively.”

When writing the script, Booster poured many of his own experiences into the story, basing the close relationship between Noah and Howie on his real-life friendship with Yang, who accompanies Booster to Fire Island every year. The pair met after Booster moved from the Midwest to New York and formed an immediate bond.

“Bowen was the first close gay friend that I had who was also Asian,” Booster says. “There’s so much that we have both experienced that is similar. Finding that person finally and feeling seen for the first time by someone like that is so powerful and important. There’s so much that we can talk about and relate over and so much that goes unsaid that can be shared. We look at each other and it’s like, Oh, I know what you’re feeling right now. This movie was really born out of that experience and that relationship.”

Booster continues, “A lot of growth has happened over the course of my time coming to Fire Island.”