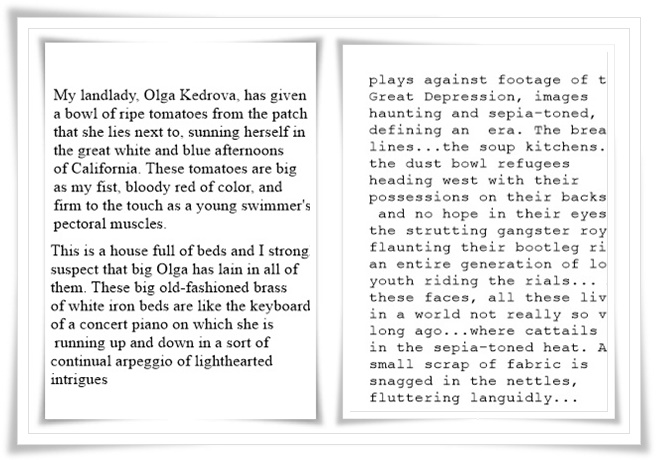 When you craft your story you have to offer a visual experience for the reader, making the story and characters vividly burst to life in their minds-eye.

As a novelist and screenwriter, your first reader is not the person purchasing your book or watching the movie, but a professional reader, who will give their approval or dismissal to publishers and studio executives. This is an important decision-maker in the publishing and film/television industries.

That is why it is vital for writers to master the art of visual narrative, seducing the minds of readers who will deliver a comprehensive reader’s report, detailing issues like theme, style, format, structure and characters, and give a thumbs up to those empowered to publish the book or make the film, indicating that it warrants publication or production.

Visual narrative is simply ‘colouring’ in your story and characters to enhance the emotive experience, allowing the reader to see and feel the story as it is happening.

Ultimately, it is all about the audience/readers, and it is your job as a writer to satisfy their expectations, to reward them for paying attention and taking a journey into your story, hopefully succumbing to its impact and being seduced by the magic of storytelling.

Remember that a well-crafted story will always

Once the story transcends from page to screen, filmgoers and audiences will decide the fate of the film/television series, just as readers of the novel and reviewers will decide whether or not it warrants a second edition.

Novels that become bestsellers often opt for film/television adaptations, a screenwriter can adapt their screenplays to novels and if it becomes a bestseller, will prompt the making of the film / TV series.

The Art Of Adaptation

Craft The Perfect Story With The Write Journey

Here are some great examples of visual narrative:

“It was about eleven o’clock in the morning, mid-October, with the sun not shining and a look of hard wet rain in the clearness of the foothills. I was wearing my powder-blue suit, with a dark blue shirt, tie and display handkerchief, black brogues, black wool socks with dark blue clocks on them. I was neat, clean, shaved and sober, and I didn’t care who knew it. I was everything the well-dressed private detective ought to be. I was calling on four million dollars.”

We want to be like this Detective in Raymond Chandler’s novel The Big Sleep. He’s our buddy, someone we can trust. Howard Hawks’ 1946 American film noir was the first film version of the 1939 novel and starred Humphrey Bogart as private detective Philip Marlowe

‘PUSHING IN on one of the falling submersibles, called MIR ONE, right up to its circular viewport to see the occupants. INSIDE, it is a cramped seven-foot sphere, crammed with equipment. ANATOLY MIKAILAVICH, the sub’s pilot, sits hunched over his controls… singing softly in Russian. Next to him on one side is BROCK LOVETT. He’s in his late forties, deeply tanned, and likes to wear his Nomex suit unzipped to show the gold from famous shipwrecks covering his grey chest hair. He is a wiley, fast-talking treasure hunter, a salvage superstar who is part historian, part adventurer and part vacuum cleaner salesman. Right now, he is propped against the CO2 scrubber, fast asleep and snoring.’

We are submerged at the bottom of the ocean with Lovett and his crew in James Cameron’s screenplay Titanic.

Bill Paxton played the character in the film.

“Far out in the uncharted backwaters of the unfashionable end of the western spiral arm of the Galaxy lies a small unregarded yellow sun. Orbiting this at a distance of roughly ninety-two million miles is an utterly insignificant little blue green planet whose ape-descended life forms are so amazingly primitive that they still think digital watches are a pretty neat idea.”

We are in orbit in Douglas Adams’ novel Hitchhiker’s Guide to the Galaxy. Holding on for dear life!

‘As we look down a gentle rain is falling steadily on a carapace of umbrellas, moving like the scales of some gigantic mythical reptile. The reptile turns out to be a well-dressed crowd swirling around the entrance to the hall and funnelling slowly into it; the same rain rolling down posters advertising the event they’ve all come to see: the debut concert of David Eli Rapoport, 21 year-old virtuoso violinist,’

The magnificent visual spleandour of the opening scene in Jeffrey Caine’s screenplay for The Song Of Names, adapted from the novel by Norman Lebrecht. We can feel the tension, the anticpation!

‘The bucolic magnificence of the Devon countryside. We fly low over the high, thick hedges untouched for hundreds of years. The thick verdant countryside in all its splendor, ancient woodlands, fields of corn, and finally a paddock in a     typical Devonshire dale. We come to rest beside three farmers standing over a pregnant mare. The mare is in distress – she is about to give birth. The farmers calm the mare and tend to her gently with assurance and authority. We pull back to see, Albert, a fifteen-year-old farm boy, watching the whole drama with delight from the paddock gate …. We follow Joey’s progress over the course of his first year. His initial fearfulness, his connection with his mother, the intimacy of their relationship. As Joey gets strong they run together, frolicking gayly in the last dregs of summer. Albert looking on. Joey notices him at the fence and they share a moment of connection … Spring: flowers are beginning to sprout by the hedgerows. Our boy Albert runs into the field. He takes an apple from his pocket – he holds it out tentatively. Joey approaches Albert with suspicion. Albert gently encourages him. His mother paws the ground and neighs at Joey. He turns and runs over the field at her beck and call. Albert tosses the apple to himself, ruefully – watches in awe as Joey races away with his mother. … He is a magnificent one year old. His distinctive red coat gleaming, now it is clear that he is half thoroughbred. He runs quickly around the field enjoying his own power and strength,’

Just as Albert bonds with Joey, so do we bond with this simple but effective bonding between a boy and his horse in the opening scene of the screenplay of War Horse, scripted by Lee Hall & Richard Curtis, based on Hall’s novel. We want to be part of their journey.

‘My landlady, Olga Kedrova, has given me a bowl of ripe tomatoes from the patch that she lies next to, sunning herself in the great white and blue afternoons of California. These tomatoes are big as my fist, bloody red of color, and firm to the touch as a young swimmer’s pectoral muscles.’

We can smell the divine decadence and fervent passion in this opening of Tennessee Williams’ short story The Mattress By The Tomato Patch.

The Opening credit sequence plays against footage of the Great Depression, images haunting and sepia-toned, defining an era. The bread lines…the soup kitchens…the dust bowl refugees heading west with their possessions on their backs and no hope in their eyes…the strutting gangster royalty flaunting their bootleg riches…an entire generation of lost youth riding the rials…the U.S. army troops raining truncheon blows on the half-starved and forgotten veterans of World War One as “Hooverville” is set afire in the very shadow of the nation’s capitol… All these faces, all these lives, in a world not really so very long ago… In a field (slow motion) …where cattails sway in the sepia-toned heat. A small scrap of fabric is snagged in the nettles, fluttering languidly… Colour bleeds slowly in as mosquitoes swarm and dragonflies skitter, showing the fabric scrap to be pale yellow… Suddenly, a Man with a shotgun comes crashing through the cattails, wiping through frame and exiting… then another man…and another…armed with rifles, ploughing through the brush, exiting frame… and now comes Klaus Detterick, a farmer one step above shirt-tail poor, a double-barrel shotgun in the crook of his arm. He pauses, horrified, seeing the scrap of cloth. He pulls it loose, turns back, screaming something in anguish…’

A magnificent description of people and places, followed by relentless tension building in the opening of he screenplay of The Green Mile written by Frank Darabont, based on a short story by Stephen King, First Draft 1997.

Watch below how this opening scene ended up in the film:

How do you learn to write great visual narrative?

There are two ways to learn how to make your story come alive, read novels and screenplays, as well as learn how to read film and television.

How to Read a Film

Also, once you are satisfied with your draft, you can submit your work to a professional story editor for fine-tuning before submitting it for publication or production.