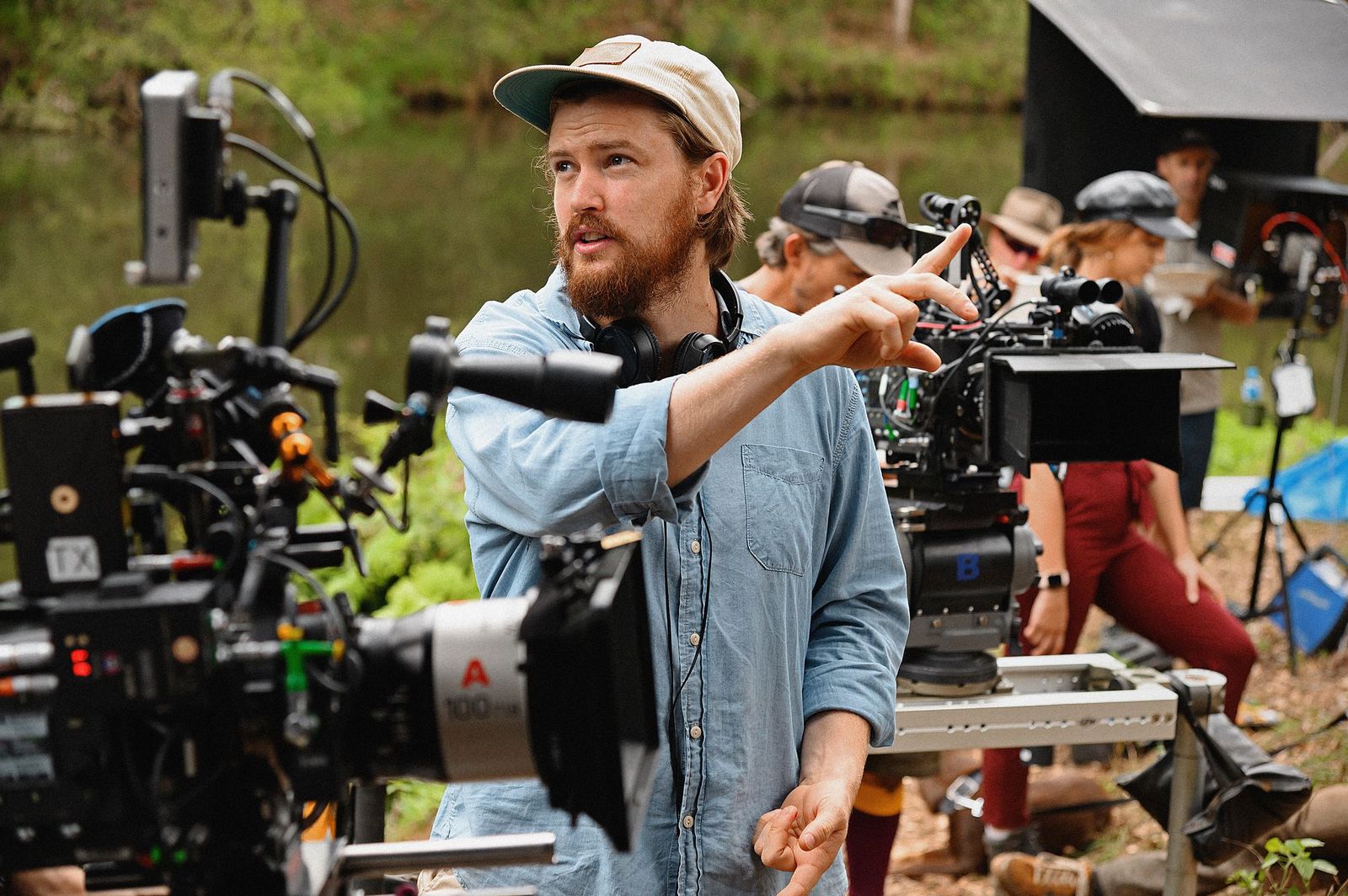 The film has won over diverse audiences and has been lauded as ‘a throwback to the Amblin-era fantasy adventure films’ and as having ‘surprising emotional depth’ by other film critics, confirming that Matthews has hit a home run with his brilliant directorial vision. The film has garnered an Oscar nomination for Best Visual Effects.

Born in Durban, Matthews studied filmmaking at City Varsity in Cape Town, before co-founding the Be Phat Motel Film Company with writer/producer Sean Drummond. He went on to make his directorial debut with Five Fingers For Marseilles, a contemporary South African Western that premiered at the 2017 Toronto International Film Festival to high acclaim, winning five African Movie Academy Awards, including Best Film, Best Film in an African Language and Best First Feature Film by a Director. It was also a New York Times Critics Pick and attained worldwide distribution, setting Matthews on the path to directing his second feature, Love and Monsters – and his first Oscar nomination.

Daniel Dercksen shares a few thoughts with Michael Matthews about Love and Monsters and being a filmmaker.

You must be on top of the world as a South African filmmaker with Love and Monsters conquering cyberspace with its Netflix release.

It’s been really awesome to finally get the film out there and have the world see it. And the response has been even more positive than I expected.

Why do you think Love and Monsters has been such an instant success?

It has the recipe for a fun adventure. A charming and charismatic main character, humour, a unique monster world and a lot of heart. I think its positive outlook and optimism are also something people want to see at the moment.

How did you get involved with the project?

After Five Fingers for Marseilles, I got agents and managers in the US and then read a lot of scripts. I especially loved this one, and connected with the producers and executives at Paramount, even though it was a really big jump in scale from my first film. To ‘win’ the job as director I did a very elaborate visual presentation of my vision for the film, which got me on as director.

What was it about the screenplay that attracted you to tackle it as director?

I love early Spielberg films like Indiana Jones, Goonies, ET and especially Jurassic Park. There was a feeling I got from the script that aligned with those same sensibilities. A guy and his dog on an real adventure through a monster world, who grows up through the film through these beautiful relationships he finds along the way.

It was a lot of work to just get to the point where the film was greenlit and happening. About 8 months of back and forth, planning, budget cuts and script work. The shoot itself was very ambitious with the resources we had, even though it seems like a big budget, but I loved it. Building the sets, creating the creatures, bringing the character to life with Dylan O’Brien, it was awesome even though it was very challenging.

What inspired you during the shooting of Love and Monsters?

My love for films like Jurassic Park and Back to the Future. While on set I’d often listen to music from my favorite films grow up, and just get really excited that I’m making that type of film. The collaboration with Dylan was also really rewarding, because he’s truly talented. We’d laugh a lot and came up with great ideas in the moment, and we really got each other through the hard times.

Love and Monsters has an awesome visual sensibility. Tell me about how your vision was translated.

My main focus was for the film to feel tangible in terms of the adventure and monsters. Although I wanted it to have life and vibrancy, I didn’t want it to feel fake. I don’t want to make artificial sets of forests etc, I wanted to make sure the adventure felt like we were moving through real places, and Joel Dawson was swimming in a real river, or rolling around in real muddy swamps. You can feel that difference.

It was the same natural approach to the cinematography and lighting. Similarly with the monsters, I wanted to make sure it looked like you could touch them, and the’d be slimy, with bits of sand and leaves on their ‘skin’.

As well as making sure the monsters were well integrated into their environments, like the frog in the algae, slimy swimming pool, or how the centipede creature comes up out of the ground. This world is now their habitat and it should feel like that. Our world is now a mutated creature ecosystem with nests, eggs sacks, webs and hives.

Your equally superb Five Fingers For Marseilles has also enjoyed much attention internationally?

Yes it did very well in festivals and was released worldwide. It’s a more mature and serious film, so had a different audience. People really responded to the originality and tone of it, as well as the deeper relevance, with the subject matter it explores.

With films like Love and Monsters and Godzilla vs Kong, it emphasises an important function of filmmaking: escapism!  Although it provides load of escapism and first-rate entertainment it has humanity at its core, poignantly and relevantly reflecting our human condition, particular with the world gripped in the fear of a pandemic.

Definitely. with bigger entertainment films I feel like the themes you deal with need to be very human and globally relatable.

In L&M there’s a message about facing your fears, and learning about yourself by doing that. Following ‘love’ even if it takes you out of you comfort zone, will open the world up and you will learn and experience more. Following fear, you will not grow, or have a positive effect on the world and those around you.

That would be the connection to the pandemic for me; the world is very focused on fear, specifically through the media, and that won’t lead to anything good.

Personally I also really like how Joel is never an alpha type male. He never sees himself as the big hero, even when he is one at the end. He’s sensitive, passionate, insecure and open hearted, and not your typical adventure hero, and I think it’s really important to have different personalities for youth to admire.

Have you always wanted to be filmmaker? Where do you think it started for you?

My dad loved movies and talking about them, so a big inspiration definitely started there. Jurrasic Park was a huge turning point when I was 10 years old, of being just blown away by a film and a world brought to life. I also had an indiana Jones hat and whip around the same age and would swing from trees with it. The first CD I bought was a John Williams (Composer: Jaws, Star Wars, Indiana Jones) score compilation, that I’d run around to and imagine I was in a movie.

What do you enjoy about being a filmmaker?

Creating things that don’t exist in a new way. All the film making elements excite me, working with actors, wardrobe, set design, story-boarding, cinematography, sound design, score, VFX. The craft of creating a film world, whilst being emotionally connected to all the beats of the story journey.

How do you see the state of filmmaking in South Africa at present?

There’s a lot of potential to create and find an audience with the new streaming platforms, but also just with YouTube and free to view online platforms. You can make something digitally and put it out there for people to see, which can create a lot of opportunity.

There are great new and up and coming filmmaker voices in SA. There are extremely talented crew and facilities. But there are a lot of challenges in trying to grow the industry.

Counties like South Korea, France and Australia have strong local paying audiences that fuel their industries. It’s very difficult to do the same thing in SA. So budgets have to be very low for specifically local films, which makes it difficult to sustain as a career, although some people have managed to find the balance.

Finding ways to partner with other countries, and find bigger audiences seems like the best way to continue growing local films.

With most films being released in cinemas and on a digital platform, it seems a great bonus for filmmakers.

I think the TV series space is where there is so much more opportunity now. The world is consuming so much more content than ever, because of the different streaming channels. And a lot of it is really good. There’s opportunity for more unique and specific cultures, stories and points of view that didn’t really exist a few years ago.

What tips you would give writers to write a screenplay that will grab the attention of producers?

Of course you must have a great understanding of screenwriting principles and structure. Don’t pretend you do if you don’t. You can break the rules and be as different as you want, as long as you actually understand the rules.

Then I’d say that you should be as honest with yourself as you can, with answering these following questions. Think deeply about the answers, and if they aren’t strong enough then you must make the script better:

I’m not sure yet. I have a handful of films I’m working on, some big studio movies, and others that are smaller. I really like genre entertainment, so I’m sure I’ll be staying in monster, sci-fi, fantasy, adventure, outer space, pre-historic, comic book, nostalgic type worlds.