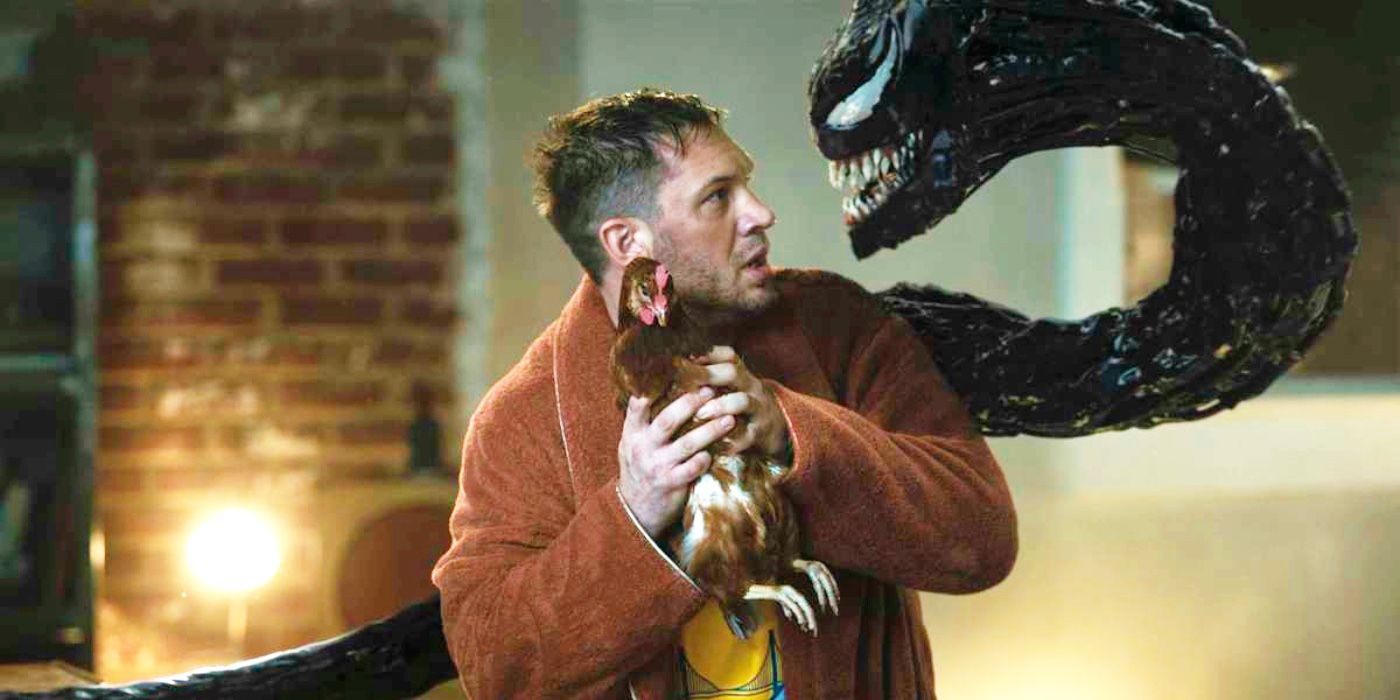 Tom Hardy is committed to every film he makes but took that commitment to another level with this film: he receives the first feature film writing credit of his career, having penned the story of Venom: Let There Be Carnage with Kelly Marcel, who also wrote the screenplay, reprising his role as the lethal protector Venom.

The story that Hardy & Marcel wrote captures the psychology of the situation. “Eddie and Venom have been living together, sharing one body, for a while now. They know each other inside and out, literally. And like any close-quarter living situation, their ticks and foibles are starting to wear a little thin on each other,” says Marcel. “They have been forced together through circumstance and this movie asks the question of whether there is a will to save the relationship or go their separate ways. Are they just cohorts through happenstance or do they actually belong together?

“Tom is a creative force with a brilliant mind for generating ideas, so collaborating with him on the story for Venom: Let There Be Carnage was a really fun and exciting time where anything felt possible for these characters that we have grown so fond of,” says Marcel. “Tom worked tirelessly to bring this story to life both in development and on set. We all know how talented he is onscreen, but I’m very excited for people to get to see how brilliant he is off-screen as well.

When we last met Eddie Brock and Venom, both played by Tom Hardy, the two had formed an uneasy alliance. With the feature film Venom, audiences thrilled to the Marvel Comics fan-favorite making his long-awaited starring role on screen. The film took in over $856 million worldwide as Eddie, the dogged but self-centered reporter, and Venom, the alien symbiote who takes hold of Eddie’s body, both relied on each other to survive: Eddie could do much better in life with Venom’s eat-or-be-eaten (literally) m.o., and Venom had to be reined in by Eddie’s finely-tuned sense of moral justice. They agreed that they needed each other… but they didn’t have to like it.

“I’m really grateful that I got the opportunity to be part of the story creation on this movie,” says Hardy. “Being part of the initial team after the first movie, Kelly Marcel, my producing partner, my writing partner and I, we were so invested obviously in the first one, we wanted to understand what went well with the first one, what didn’t go so well with the first one, and what the fans liked, what they didn’t like, what the critics didn’t like. On top of that, to look at all of this forensically and try to figure it out. <…> So, we asked the studio, could we make a pitch to give the first go at the story before anybody else, and the studio said – of course!”

“It’s a joy to play two different parts of a psyche because Venom and Eddie are one for me,” says Hardy. “They are just differentiated by the fact that one is the monster and one is Eddie, but they are always contained within one individual.”

“Obviously there is danger and mistrust in the beginning, but they’ve learned to live with each other,” says producer Avi Arad. “It’s become a complicated marriage. Their co-dependence forces them to stay together, even though they’ve had it with each other. They’re going to have to come to an understanding.”

Indeed, in Venom: Let There Be Carnage, that shaky marriage is starting to crumble. Sure, there are still upsides… Eddie has told Venom that he could bite the heads off of bad guys, and the symbiote is 100% here for it, dubbing themself the Lethal Protector and munching evildoers in pursuit of justice… and Eddie’s career is firmly on the upswing, getting the career-defining last interview with serial killer Cletus Kasady (Woody Harrelson).

But despite it all, they still make each other nuts – and their constant bickering escalates until it finally devolves into a violent manic battle as they try to figure out who is throwing who out of the apartment and the body they share. Both Venom and Eddie are determined to figure out if they really do need each other after all.

“Carnage is who the fans have been waiting for, finally making his big screen debut,” says Arad. “He’s Venom’s ultimate adversary, stronger and more violent in every way. It doesn’t help that serial killer Cletus Kasady is Carnage’s host, enhancing his maniacal worldview into something incredibly sinister. In the comics, Carnage is Venom’s offspring – his ‘son,’ if you will – which makes the conflict between them far greater.”

“Carnage is such a huge part of and the most beloved villain in the Venomverse,” says Marcel. “Bonding with Cletus, together they are a psychotic, dangerous, and insane killing machine.”

The extraordinary relationship between symbiote and host.

“The film is a love story – but not the love story you might think,” says Andy Serkis, who directs Venom: Let There Be Carnage. “It’s very much about the extraordinary relationship between symbiote and host. Any love affair has its pitfalls, its high points and low points; Venom and Eddie’s relationship absolutely causes problems and stress, and they have a near-hatred for each other. But they have to be with each other – they can’t live without each other. That’s companionship – love – the things that relationships are really about.”

Serkis says that Eddie and Venom might be a match made in hell – but they are a match nonetheless. “It’s Jekyll and Hyde,” he explains. “Eddie is rather arrogant, thinking life owes him a favor. Venom is the complete opposite, unfiltered and speaking his mind totally. And they’re trapped together. After meeting in the first movie, they’ve now got the seven-year-itch; they’ve had enough of each other and can’t wait to be apart.”

For producer Matt Tolmach, the reason Venom connects with audiences is a combination of factors – a bit of wish fulfillment, a complex motivation, and a perfect match of actor and character. “There’s always something fun and dangerous about characters that push the dark side. You just wish you could do exactly what Venom does,” he says. “But Venom also has a code. In some ways, he becomes a conscience for Eddie – Eddie sometimes plays fast and loose with the truth, but Venom has a very real sense of what he thinks is right. And when you combine that with Tom Hardy and this unbelievable dynamic that Tom created between himself and this alien alter ego, it’s just so much fun to watch a man at war with himself.”

“In my opinion, I have to find a way into any character that speaks to me <…> In many ways, Venom and Eddie are like Jekyll and Hyde.” says Hardy. “Split personality, or the good self, the bad self. There’s a smorgasbord of options between paranoia, nobility, integrity, dignity, cowardice, bravery, courage – all of these characteristics that the two of them display at uneven times. And they bring out the best in each other, but they’re also constantly in conflict. It presents an entertaining and fun challenge to play with this character.”

It’s the old story – can a human man and an alien symbiote share one apartment (and one body, for that matter) without driving each other crazy? (Answer: no.)

“The argument in the apartment is one of the first things we shot,” says Serkis. “For two years, these two have been living a frat party kind of life in Eddie’s apartment, and he’s sick and tired of his place being trashed. It’s like living with an oversized toddler with no control whatsoever.”

After their epic breakup, though, it becomes clear that neither is going to make it on his own. When part of the symbiote leaps into Cletus Kasady moments before his execution, the serial killer becomes host for Carnage, an even-larger, even-deadlier, and much-more-malevolent spawn of the alien, ruthless and pure evil.

For Serkis – who as an actor worked with performance capture artists to create some of the most memorable characters of the last 20 years, including Gollum in Lord of the Rings, Caesar in the Planet of the Apes films, and Supreme Leader Snoke in Star Wars – watching the first Venom film as a moviegoer filled him with some professional pride and admiration.

“I thought Tom gave an extraordinary performance. It was right in my wheelhouse – creating characters using CG,” he says. “When Tom gave me a call out of the blue, saying he thought it would be great if I directed the sequel and asking me to come on board, I think it was because he wanted a director who would be capable of safeguarding his performance, translating it into a visual-effects realm, with some degree of authority from experience with that. We had been circling each other as actors for so many years, and it was wonderful to finally get the chance to work with Tom.”

“Andy has spent years in front of the camera as well as behind it. He’s done performance capture and animation, and he understands story and nuance and vocal landscapes,” says Hardy. “He’s a great actor, a great director, and a decent man too. He was perfect to direct this and has done an amazing job.”

Serkis’s experience with CG characters came through on the film set. “I’ve spent a considerable amount of my life playing a character with two sides to his personality,” says Serkis. “I knew that this film would be about how to free up Tom to imagine Venom’s presence. We knew it would not be helpful for him to act opposite a man in a suit, because Venom is a symbiote, coming out of him.”

That is why, despite his many years of acting in performance capture, Serkis chose to animate Venom and Carnage with a more traditional CG animation approach. “We wanted to give Tom the freedom in his process to give the performance he wanted.” He and his team did, however, find ways to apply what he has learned from performance capture to this film. “We used it as a tool to find the physicality of the characters,” he says.

The character of Venom had been well-designed for the first film, but Carnage would need to be drawn from scratch.

“Venom is like a quarterback or a rugby player – very heavy, grounded, a Neanderthal physicality, a heavyweight, big shoulders, very, very, very strong,” says Serkis. “We wanted Carnage to be the opposite of that. He’s a shapeshifter, asymmetrical, reflecting Cletus Kasady’s personality. His tendrils are finer and thinner, and can weaponize in different ways. He can change his molecular structure to become anything, any shape, even turn to mist.”

“The place we started, of course, is the comic books,” says visual effects supervisor Sheena Duggal. “From there, we explored anatomy, we explored materials, what the character’s made of, how it reflects light, what color it is, how it moves and performs, what does the full character look like versus what does a tentacle look like – and how do we bring them all together and put everything into a cohesive world?”