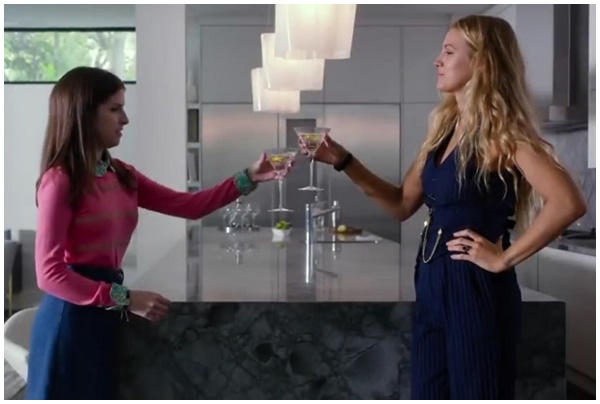 “This is a story about the nature of secrets, how they ripple outward, informing our relationships and lives, but it’s also about women’s choices.”

With twists no one could see coming and the story being so cinematic, the film rights to Darcey Bell’s 2017 debut novel A Simple Favor were sold before it was published and soon after, screenwriter Jessica Sharzer (Nerve, Speak, Dirty Dancing) began tackling the adaptation.

Bell was raised on a dairy farm in western Iowa and is currently a preschool teacher in Chicago.

A Simple Favor, a stylish post-modern suburban noir,  centers around Stephanie Smothers (Anna Kendrick), a mommy vlogger who seeks to uncover the truth behind her best friend Emily Nelson’s (Blake Lively) sudden disappearance from their small town. Stephanie is joined by Emily’s husband Sean (Henry Golding) in this stylish thriller filled with twists and betrayals, secrets and revelations, love and loyalty, murder and revenge.

From the start, Sharzer wanted to upend the woman-in-peril storyline that has become a staple of entertainment. Instead, she toys with our familiarity with the structure, but also subverts it.

“There have been so many of these twisting tales with unreliable narrators,” Sharzer acknowledges, “but what I loved about Darcey’s book is that it takes a different attitude. The book always has its tongue firmly planted in its cheek and that’s what I most wanted to capture. I wanted the film to lean way into the genre, adding twist upon twist upon twist, but always doing it very consciously.”

If Sharzer took a playful approach to the story’s breakneck narrative pace, she was also taken with the  rich underlying themes. “This is a story about the nature of secrets, how they ripple outward, informing our relationships and lives,” she says, “but it’s also about women’s choices.”

This was the theme that most inspired Sharzer, one that underpins the soaring popularity of domestic noir as a cultural phenomenon—that women are required to choose a role to play in life and also penalized for breaking out of those roles. Sharzer continues, “I like that this story looks at how different women decide between career and children. What are the compromises we make on both sides—and what do we lose when we make them? These are conversations I have with my friends all the time. They’re important conversations and I find it exciting that a thriller can speak to these ideas,” she says.  “In Stephanie and Emily, you have two very different women—a stay-at-home mom and an ambitious career woman—who would never have been friends had it not been for their sons. I’m very interested in these distinctions and the way that women still feel forced to choose one or the other.”

To up the visual fun, Sharzer turned Stephanie from a blogger to a vlogger. While the book switches points-of-view, Sharzer made the choice to keep Stephanie as the center of the action in every scene. We then watch her as her can-do mommy persona weathers a breathless storm of suspicion, catastrophe and psychological warfare. Sharzer’s affection for Stephanie was acute. “I love her because she’s such a geek in certain ways,” she laughs.  “She tries so hard, yet she knows she’s mocked by the other mothers. Her vlog followers are really her only friends, but they’re her surrogate friends. So she’s lonely and she’s also haunted by sins in her past, and all that has informed her desire to become the perfect mom.”

That said, cunning and high-flying badass, Emily—Stephanie’s dark mirror opposite—was equally fun to write. “Emily is so fashionable and slick, but it’s also a façade. Intriguingly, both Emily and Stephanie have dark pasts, but they hide them in very different ways: Stephanie by baking healthy cookies and Emily by working in high fashion, which is all about surfaces and mystique,” Sharzer explains.

Things moved very quickly from the moment Sharzer took on the adaptation, up to the start of production. She was especially gratified to have director Paul Feig (Bridesmaids) take the helm, having loved his women-centered comedies. “I felt so fortunate, because you can see in Paul’s work that he has a real talent for tapping into what makes women funny, but never in a mean or two-dimensional way,” she observes.

Feig had a jolting reaction to his first read of Sharzer’s script. “I remember I was in my backyard, sitting in a comfortable chair, just saying, ‘Oh my God, oh my God,’ as I read. That feeling honestly never left and it guided me through the entire filmmaking process.”

Feig makes a departure from the blockbuster comedies he’s known for, and builds the film as a twisting suspense thriller, but also a tasty satire on our constant striving for the flawlessly-curated 21st century life. Producer Jessie Henderson, who also produced Feig’s Spy, says, “This movie really defies comparisons, which is what people are going to like about it. There are pieces you can isolate or compare to other things, but ultimately it really feels new and fresh with influences from many genres.”

The lure of A Simple Favor for Feig was that it seemed to have all the ingredients—a nail-biting plot, diabolical imagination, tongue-in-cheek humor, characters of never-ending psychological complications and a deceivingly serene suburban setting—to let him stretch the expected shape of the thriller form. “I really love playing with genres and I love twisting pre-set rules and movie tropes to have more fun with them,” says Feig. “When A Simple Favor came to me, it was like, ‘bingo!’ This is what I’ve been looking for. Thrillers have always been some of my favorite movies to watch, so I was excited to play with the construction—and Stephanie is one of my favorite characters that I’ve ever been able to bring to the screen.”

Feig latched onto Stephanie as a chance to turn the typical expectation of the tough, cynical thriller hero on its head. He says, “She’s someone we all know—the mom whose whole life is all about being a people pleaser and always doing nice things for others—and who is taken advantage of because of that. What I most wanted was for you to root for her, even as she’s having her eyes opened to the darkness all around her.”

In Sharzer’s script, Feig saw the rare opportunity to take the audience through a shift in perception.   “Women are often put in such specific boxes. This is the ‘beatific wife’ or this is the ‘bossy bitch,’ but in this film you might think Stephanie is the ‘chirpy mom’ you want to make fun of, but then you start realizing maybe your perception isn’t quite right. Stephanie has other sides to her and she’s got all these secrets. I loved the idea that you’re always having the rug pulled from under you,” says Feig, and he latched onto that idea and ran all the way with it.

Executive producer Mike Drake (Riddick) says of Feig’s approach, “Paul had a take on the story that was anything but a straight thriller, one that brought new layers of intrigue and levity to it. Paul is so dedicated to the craft of storytelling and he’s also got a very strong creative partner in the film’s producer, Jessie Henderson. They both really know what they want and that is what attracted our great cast to the film.”

While Feig mined the humor that comes from Stephanie’s chipper personality getting ensnared in a tangle of dark mysteries, he was also one-hundred percent committed to taking the suspense in the film to the nth degree. The whole film takes place at a pitch that can turn from a giggle to a scream on a dime.

“I love movies where you’re laughing half the time, then terrified the other half,” says Feig. “That’s a lot like life. You’re often thinking, ‘Is this person for real?  Is there more to what I’m seeing?’ In this story, all those thoughts play out.”

To make the contrasts between the scary and the funny even starker, Feig decided to shoot the film like a sun-dappled suburban comedy rather than a gritty drama, despite all the paranoia and adrenaline roiling within the story. “In this film, thrilling things happen in the daylight rather than in darkly lit rooms,” he notes. “In the suburbs, there’s not a lot of hiding among the white walls and bright windows.  You see what’s going on, at least in the open. That is what makes it so fun.”

For Anna Kendrick, portraying Stephanie as she applies her sparkly attitude to the most sinister of human machinations was a one-of-a-kind balancing act that she relished. “This is a genre-bending story that has big comedy, a murder mystery, twists, turns and surprises.  Stephanie is definitely one of the most optimistic characters I’ve ever played, but she also has a lot of blinders on—and those blinders get peeled off the hard way starting from the moment Emily disappears, which is part of the fun,” Kendrick says.

Feig notes that the balancing act of the film—the fun, but also the psychological and social frenzy—led him into new territory, which is exactly what he wanted. “The film is definitely funny, but it also takes you through a whole range of emotions and major twists and turns that I haven’t explored before. And the opportunity to do that is all thanks to the amazing source material from Darcey Bell, the work of writer Jessica Sharzer, our incredible actors and also the talented crew who joined us to tell this story.”

Jessica Sharzer (Screenwriter) made her feature writing and directing debut with Speak, starring Kristen Stewart and Steve Zahn. It premiered at Sundance in 2004 and was nominated for a Writers Guild Award and a Directors Guild Award.

She has since developed feature films for Universal, Sony, HBO, MTV, Fox and Lionsgate. She wrote the 2016 feature film Nerve, starring Dave Franco and Emma Roberts. She adapted Marie Lu’s YA novel “The Young Elites” for 20th Century Fox and Temple Hill. She is currently writing a Marvel movie for producer Amy Pascal and Columbia Pictures. She is also adapting Ariel Levy’s acclaimed memoir The Rules Do Not Apply for Participant and producer/director Jill Soloway.

In television, Ms. Sharzer spent four seasons as a writer-producer on the acclaimed FX series “American Horror Story.”  She was a co-executive producer on Lee Daniels’ drama “Star” on FOX. Ms. Sharzer has developed drama pilots for CBS, FOX, MTV and ABC networks.  She is currently developing a drama pilot for USA Network and Lionsgate.

Ms. Sharzer holds an M.A. from UC Berkeley in Russian Literature and an M.F.A. in Film & Television from NYU. She is an adjunct or visiting professor in the graduate programs at NYU, USC and Stephens College.