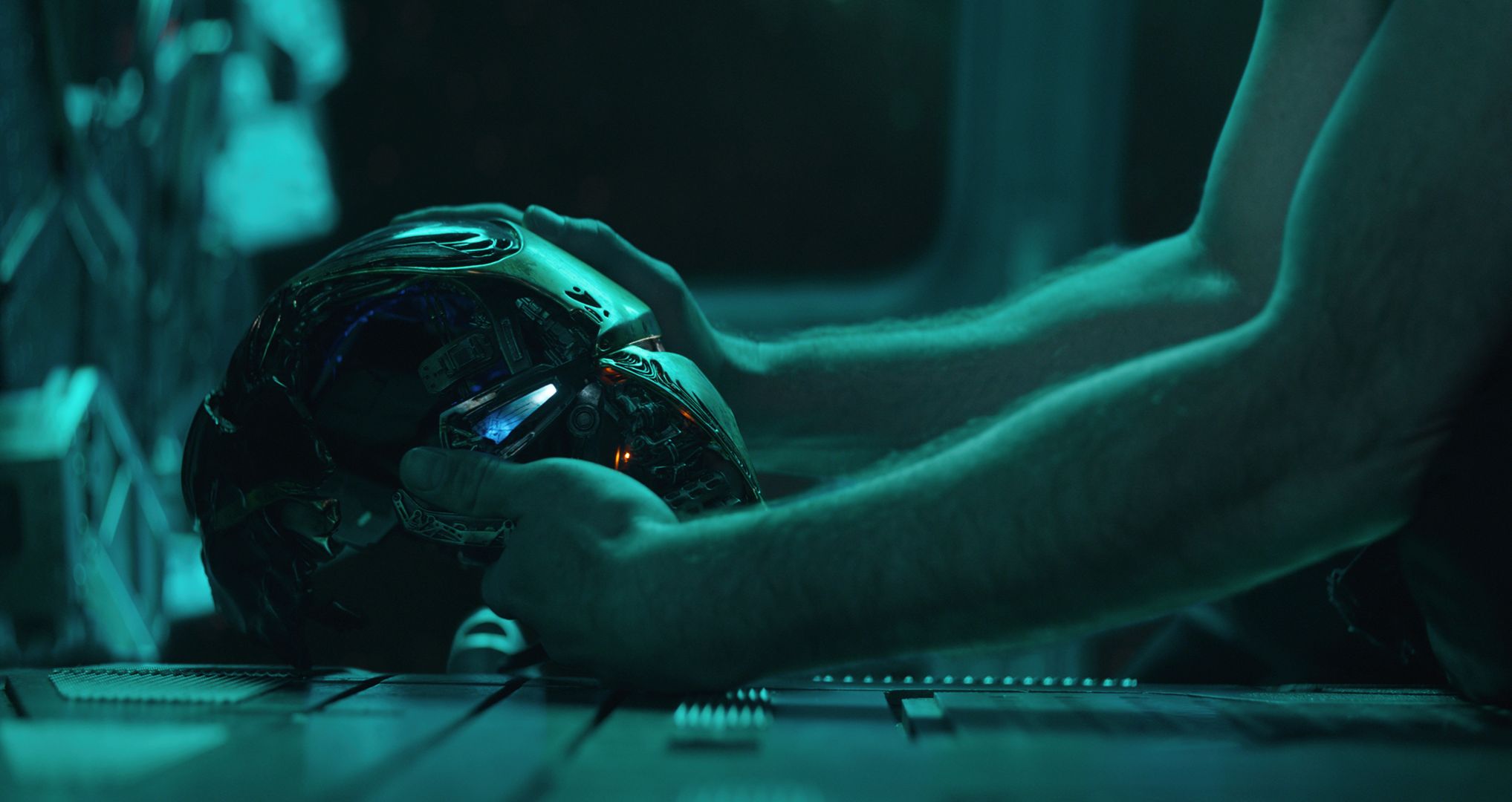 Marvel Studios’ Avengers: Endgame is the most highly anticipated film ever in the Marvel Cinematic Universe and marks the 22nd Marvel Studios film to date, concluding the climactic cataclysmic events that unfolded in the top-grossing film of 2018, Avengers: Infinity War.

Two of the most successful and respected directors over the last decade, Anthony and Joe Russo, return to helm their fourth Marvel Cinematic Universe film and second “Avengers” film in the franchise. They made their Marvel cinematic directorial debut with the box-office blockbuster Captain America: The Winter Soldier. After a record-breaking opening weekend, the film went on to gross more than $713 million worldwide. They followed the film with Marvel Studios’ Captain America: Civil War,” which recorded a $179 million opening weekend on its way to grossing $1.15 billion at the worldwide box office.

“Anthony and Joe Russo are true visionaries,” says producer Kevin Feige. “They are bold filmmakers who have immaculate taste and are not afraid to push the boundaries of what an audience is expecting from films like this. You saw it in ‘Civil War.’ You saw it in ‘The Winter Soldier,’ certainly in ‘Infinity War,’ and now with ‘Endgame,’ which I believe is their master work.”

Continuing, he adds, “They’re artistic storytellers who understand how to fulfill and subvert audience expectations in ways that are exceedingly risky. They had the foresight and vision to end ‘Infinity War’ with the heroes losing in such a way that it captured the global imagination and incited a cultural event.”

Markus and McFeely have been writing together since 1995.

They penned the original screenplay for the critically acclaimed HBO feature The Life and Death of Peter Sellers; Markus and McFeely won the Emmy for outstanding writing for a miniseries, movie or dramatic special, as well as a Writers Guild Award.

The Avengers franchise has had an unprecedented cinematic journey, spanning several galaxies over the Marvel Cinematic Universe’s 11 years.

Avengers: Endgame brings to the big screen the highest stakes and deadliest showdown ever between the Avengers and the universe’s most powerful and deadliest villain, Thanos.

It picks up with the Avengers having been soundly defeated by Thanos, who, after collecting the six Infinity Stones, imposed his twisted will on all of humanity and randomly wiped out half of the world’s population, including many of the Avengers.

In the aftermath of the destruction, the remaining Avengers are faced with their biggest challenge yet—finding the resolve within themselves to get off the mat and find a way to defeat Thanos once and for all.

In the 11 years since the film’s release, Marvel Studios has opened six films that have each grossed over $1 billion, with a collective total of over $19 billion for all 21 films at the worldwide box office.

For Marvel Studios co-president and executive producer Louis D’Esposito, part of the continued success of the MCU has been its fluidity and ability to shift with the changes in the cultural zeitgeist, and to have its films populated with characters and stories that are congruent with the diversity and inclusive nature of the real world we live in.

“At Marvel, we’ve always tried our best to have characters in our films that all of the general movie audience can identify with and relate to,” says Louis D’Esposito. “We have had strong female characters in our films, starting with Black Widow on the big screen in ‘Iron Man 2,’ and ‘Agent Carter’ was our first Super Hero television show that featured a female lead character. In ‘Ant-Man and The Wasp’ we had the shared title, and now with the overwhelming box-office success of ‘Captain Marvel,’ it once and for all debunks the misconception that a female lead in a superhero film is not as financially viable.”

D’Esposito continues, “If we can tell interesting stories with women, men, people of color, all races, all creeds and religions, we’re going to. The world is diverse, and we strive to make films that portray society as it is in real life. People enjoy coming to movies like that. We proved that with ‘Black Panther.’ It gives us great satisfaction to break through those barriers, and there’s no more ceiling above us. We have shattered through it, and we’re excited to explore Super Heroes from all different backgrounds in the future. With ‘Infinity War’ and ‘Endgame,’ you really get to see what a diverse and broad swath of characters populates the Marvel Cinematic Universe. There is something for everyone, and it’s all connected together in a way that feels authentic and real.”

“As with everything at Marvel Studios, the road map and the guide points are there in publishing,” adds Kevin Feige. “There’s a reason Marvel Publishing is celebrating their eightieth anniversary, because the stories evolve and the stories change. And the characters within those stories change and evolve masterfully through the decades.”

Audiences around the world embraced the culmination of 10 years of filmmaking, propelling Avengers: Infinity War to the largest worldwide opening of all time. For screenwriter Stephen McFeely, the box-office records the film broke were a great validation for the many years of hard work in the Marvel Cinematic Universe.

“It was one of the highlights of my career and was a big win,” says McFeely. “I got choked up and really emotional for a minute and then danced around my bedroom. That weekend we went out to different theaters and watched it with a regular audience, and I was so thrilled to hear people quoting lines from the movie as we were walking out of the theater. It was also such a surreal experience to see the film become part of the cultural zeitgeist as everyone was talking about it.”

“We have been working on these two films over the past four years,” notes Kevin Feige. “Christopher Markus, Stephen McFeely, Joe Russo, Anthony Russo and Trinh Tran were in a conference room in Atlanta discussing these films while we were filming ‘Civil War.’ It continued all the way through the year between ‘Civil War’ being released and the beginning of production for ‘Infinity War.’ That time and the creative crucible of that room is the most fun I’ve had in my time at Marvel Studios because it was really about paying off the twenty films in this unprecedented series with people who had done so much work for us. Christopher and Stephen go back to the first ‘Captain America’ film; Joe and Anthony Russo go back to the second ‘Captain America’ film. They are people who love these stories and aren’t afraid of taking risks with these stories.”

“Our years of experience in the trenches with Markus and McFeely proved invaluable,” says Anthony Russo. “We’re like a finely tuned band that’s been playing together for years, and we can just pick up new ideas and throw them back to one another really easily now. That is the key to the process of working together. We had all been steeped in these characters and in these stories for so many years now. All the history comes to fruition with ‘Endgame.’ So, all the creative work and exploration that we’ve done throughout the years on the various films that didn’t make their way into those films, still had great resonance for how we realized this story. So, we drew on a very deep well of creative thought and exploration that’s been going on since 2012.”

“Markus and McFeely have been incredible collaborators for all four of our films, and they’ve written more films than anyone else in the Marvel Cinematic Universe,” adds Joe Russo. “They have an encyclopedic knowledge of the characters. As you progress through films in the MCU, your job as directors gets bigger and bigger. There’s the adage that you have to fly at forty thousand feet to get perspective on the bigger picture, and by the time we got to ‘Endgame’ we were flying at seventy thousand feet, and you really have to have an incredible production team of collaborators that allow you to focus on the big picture. By having Markus and McFeely and the rest of the deeply talented team around us, it allows us to focus on the bigger picture and receive information from all sides of the Marvel Cinematic Universe.”

For screenwriter Stephen McFeely, the story-creating process has been a great collaboration with the Russo brothers for many years.

“Joe and Anthony are just great guys,” says McFeely. “We enjoy different things about them. Joe is like the Energizer Bunny and he does not stop, and he always has another idea. Anthony is much more methodical and deliberate in a lot of his choices. In our meetings, the conversations have a similar pattern of a push from Joe on one side, and there’s a resistance from Anthony on the other side. Chris Markus and I fall into similar camps, too, where Chris is more like Anthony, and I’m a little more like Joe, but ultimately it really just comes down to the best idea wins, whoever’s that may be. We always have lots of ideas, but we always end up in the place we need to be, and it’s worked really well like that since we met in 2012.”

In finding the jumping-off point and storyline for “Avengers: Endgame,” screenwriter Christopher Markus had one ace in the hole that they used as their north star. “We had the benefit of knowing from very early on that ‘Infinity War’ was going to end with the snap and a very definitive close, which would give ‘Endgame’ a little more of its own space to develop, because it wasn’t a direct continuation of what happened. It was the aftermath. We didn’t want a straight-up two-parter, and when the story of two films evolved it began to be very clear that ‘Endgame’ was very different structurally and tonally.”

The screenwriter continues, “‘Infinity War’ was very much Thanos’ movie. It’s structured around his arc and his success at the end of the movie. In ‘Endgame’ it swings back to the Avengers, and we get more inside them and their point of view and dealing with the emotions of the aftermath. Structurally ‘Endgame’ is much more circuitous, and I don’t want to go so far as to say philosophical, but it is less driven by that looming threat from Thanos that was hanging over their heads throughout the last film, which gives it a little more room to breathe.”

“We have just closed the first decade at Marvel Studios, and we want to follow that example by not just evolving and growing the characters we’ve already introduced but bringing new heroes to the screen and new types of heroes to the screen and providing a level of representation that people haven’t seen up to this point. We’ve already seen it in all of our films, but in terms of title characters with ‘Black Panther’ and most recently with ‘Captain Marvel.’ And that’s going to continue through and past ‘Avengers: Endgame,’ so that the films are a mirror of the world and the types of heroes around the globe.”

Wrapping up, Feige explains what he has enjoyed the most in guiding the films and overall vision and direction of the MCU since he joined Marvel in 2000. “It’s been my dream job. I feel like it’s only been a short period of time and not almost twenty years, because it’s so much fun to bring these characters to life and try to do justice to Stan Lee and Steve Ditko and Jack Kirby and all the artists and writers who have created these characters.