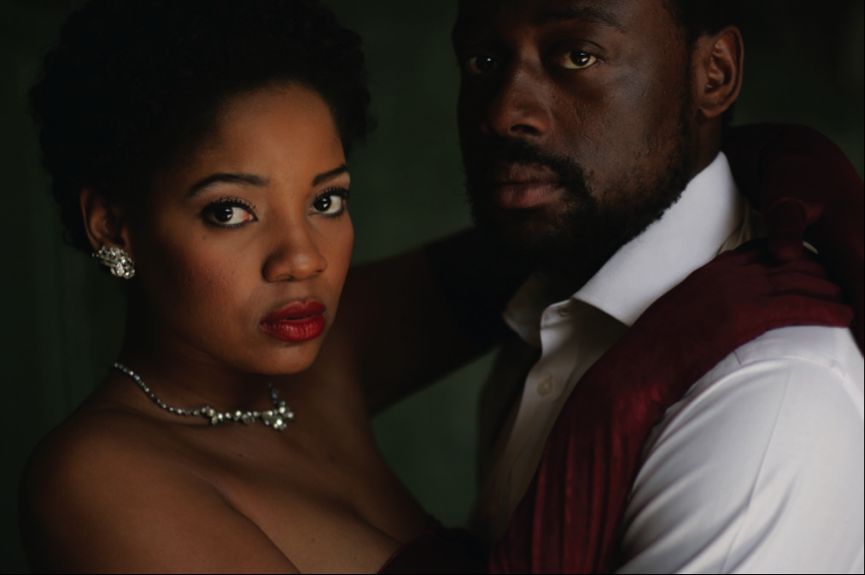 On the eve of his home being demolished by apartheid police,the leader of the most powerful gang in Sophiatown finds something worth living for in Back Of The Moon when fate thrusts a torch-singer Eve Msomi into his orbit.

“In the end it is a film about potential stifled and wasted by Apartheid – men preying on each other in a “pressure cooker” situation. It is about  feisty, talented woman surviving their abuse by any means necessary, but ultimately it is the love story that transcends this darkness” says writer-director Angus Gibson, who was a founding member of Free Filmmakers, a film co-operative established in 1985 to create a relevant South African cinema.

Back Of The Moon won the Best South African Feature Film prize at the Durban International Film Festival in July 2019, and is directed by Academy Award nominee, Angus Gibson and stars Richard Lukunku, Moneoa Moshesh, Lemogang Tsipa and Thomas Gumede;  produced by Desiree Markgraff and executive produced by William Kentridge and Anant Singh

“Back Of The Moon tells a quintessentially South African story, and the removal of black people whose freehold property in Sophiatown was forcibly was taken away from them by the apartheid regime.  Angus crafted an authentic film that has captured the essence of Sophiatown which was enhanced by superb performances by the talented cast,” says Anant Singh.

In the 1980’s I joined the Junction Avenue Theatre Company to workshop a protest play about Sophiatown, a black ghetto close to the centre of Johannesburg, which in the 1950’s had been the first target for removal by the Apartheid government.

We embarked on research and interviewed journalists, writers, politicians, singers, gangsters and ordinary residents who had lived there. The play was a hit – it found huge audiences in Johannesburg and travelled abroad to Europe and North America.

Together with William Kentridge, I then made Freedom Square and Back of the Moon, a documentary about Sophiatown based on the research and interviews we had done.

Thirty years after making the documentary, we had magnificent 1950’s sets left over from The Road, a telenovela we had made, and my partner, Desireé Markgraaff, suggested that we find a story to shoot small feature film before they were torn down. I was keen to do something with the actors, Richard Lukunku and Moneoa Moshesh who had done fabulous work on The Road.

I decided to revisit Sophiatown. Back then the enigmatic and style conscious gangs like The Americans, The Vultures, and The Berliners, had professed to be the Robin Hoods of the ghetto but faced with the monolith of Apartheid, they often turned on their own. In their interviews the gangsters, Kort Boy, Salatiel Maake and Don Mattera, joked about using their knives to terrorize the people of Sophiatown. They remembered invading stages mid concert, and “kidnapping” the beautiful women singers for a weekend of “fun.”

These escapades had been spoken of lightly, but I have no doubt that they were traumatic for the women involved.

I set out to make a genré film about Eve, a singing star that takes bloody revenge on the gang that kidnaps her, but in the writing with Libby Dougherty, the leader of the gang, Badman, emerged as a complex and sympathetic character and it evolved into a bittersweet love story. Violent and tender, the film in both style and content, is heavily influenced by the noir movies that the Sophiatown residents so loved to watch. I had originally intended to shoot the film in black and white to match the documentary footage that bookends the film, but instead, together with the great talents of our DOP, Zeno Petersen and art director, Dylan Lloyd, we saturated the film in the red of blood and passion.

I had feared that the violence would swamp the love story but in the post production the editors found a balance that allows both to coexist. In the soundtrack we used the great jive music of the period – the Manhattan Brothers, Miriam Makeba and the Harlem Swingsters. Phillip Miller composed a hauntingly beautiful score and Sjava and Kwesta collaborated on a fabulous song, part fifties mbaqanga, part hip hop, for the end credits.