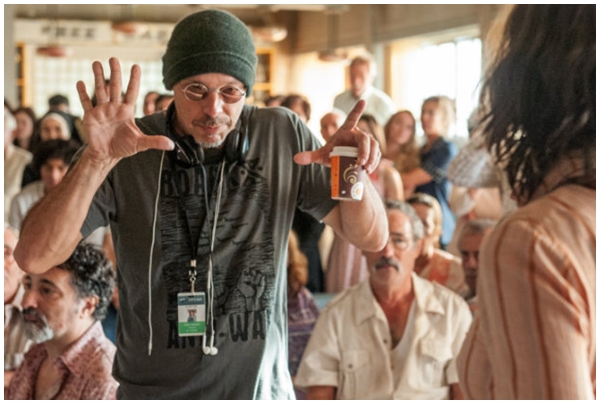 Those seven days in 1976 shed an enlightening light on many issues we still face today. That, together with the quality of Kate Salomon’s research and Gregory Burke’s writing are the main reasons why I accepted Tim Bevan’s invitation to direct the film.

The raid on Entebbe, despite its acclaimed military success, has had many unintended consequences, some of which are of great historical significance,” says director José Padilha.

For instance, Benjamin Netanyahu has said that he entered public service because of his brother, Yoni Netanyahu (the elite forces commander of the operation), who was killed during the raid. I believe the symbolism of Yoni’s heroic death and of the operation itself have played a role in shaping Netanyahu’s political career and policies. It’s no coincidence then, that most (not all) of the docs and movies made on Entebbe narrate a military feat.

Welcome home: ecstatic crowds greet the return of the soldiers and hostages to Israel

My film, Seven Days in Entebbe, tells two parallel stories about the raid: on one hand, we look at the saga of the hostages and the terrorists, and how their interaction and mental states evolved as the days went by; on the other hand, we look at the internal debate that the hijack ensued inside the Israeli Government, and at the opposing positions assumed by Defense Minister Simon Peres – who was against negotiations by default – and Prime Minister Yitzhak Rabin – who entertained negotiations as a real alternative.

Read more about the film 7 Days In Entebbe

The first narrative strand, the hijackers’ saga, is of interest to me because recent research on Entebbe contradicts the usual way those hijackers were portrayed. Take, for instance, the following statement by the British scholar Saul David in his recent book Operation Thunderbolt: “Suddenly the four terrorists on guard tumbled back through the door, led by Wilfried Böse who was holding a sub-machine gun in one hand and a grenade in the other. Looking from the back of the room, Ilan Hartuv could see Böse pointing his weapon at the hostages on the floor, many of whom were sobbing, and was convinced he was about to open fire. So too was Michel Bacos who, a day or two earlier, had been told by Böse: ‘If any army from any country comes to save you, you can rest assured that we will hear them first, and before they get to you we will kill every last one of you.’ Now Bacos felt certain Böse would carry out his threat. The German certainly had the opportunity, as did the other terrorists. But, instead of pulling the trigger, Böse jerked his head towards the back of the room and told the hostages near him to ‘retreat’ and take cover.”

Professor Saul’s account, independently repeated to us by other hostages (including Jacques Lemoine, the flight Engineer on the Air France flight 139) entails two things: 1) After spending time with the hostages, at least one of the hijackers started to think critically about his own actions. 2) The operation achieved is military success partly because the hijackers, influenced by Böse, did not make killing the hostages their number one priority when they realized that the Israelis were coming.

Reading this in Professor’s Saul’s book lead me to think about the hijackers, their different motivations, and how the hostages managed to make some of them question the premises of what they were doing. Was it the case that, at least in part, the military success achieved on Entebbe was due to the hostages themselves? That, to me, sounded like an interesting subject to explore. The construction of some of our characters, in particular that of Böse, Brigitte, Jabber and Lemoine, was meant to stimulate debate around those questions.

The second narrative strand of the film is directly related to one of the most crucial issues for both Israeli and Palestinian political leaders – the political implications of negotiating. And indeed, what happened in Tel Aviv and Jerusalem as the crisis developed illustrates this point perfectly. If one examines the way Peres and Rabin dealt with the hijack, either by reading the transcripts of their cabinet meetings or by talking to those who were there – such as Amos Eiran, Rabin’s aide –  one will notice that they had two kinds of problems to deal with. First, they had the objective problem of how to save the lives of the hostages. And they had to consider how the outcome of this very prominent hijack would affect the willingness of other terrorist groups to act against Israelis in the future. Obviously, those were legitimate policy problems. But lurking behind them, there was a third problem that was solely political: given that most of the Israeli population was against negotiations at the time, Rabin and Peres had to consider how engaging in negotiations would affect their political careers in the future. If Simon Peres could give Rabin a tenable military option, and Rabin decided to negotiate, that would give Peres a political edge over his rival. Conversely, if Rabin ended up negotiating for lack of a viable military option, the edge would be his. It is interesting to notice that Rabin approved the operation even though he had serious doubts about its possibility of success. And he had Amos Eiran draft a resignation letter.

Those seven days in 1976 shed an enlightening light on many issues we still face today. That, together with the quality of Kate Salomon’s research and Gregory Burke’s writing are the main reasons why I accepted Tim Bevan’s invitation to direct the film. Indeed, investigating the political dimension of the hijack gave me some insight into a broader phenomenon, one that still constrains the very possibility of negotiations between Israel and Palestine.

Despite decades of negotiations, why today do we have a situation where the hardline position is the politically safe route for both sides of the conflict? The answer, it seems to me, is that each population lives in a state of constant fear, a state that is easily manipulated by politicians and religious leaders who gain prominence by posing as the ones who can protect their people from the “enemy.”  It’s ironic, but it seems to be true: for an Israeli soldier boarding a plane on the way to a military confrontation with Palestinians is the ultimate act of courage. But for an Israeli or a Palestinian politician, the real courage is in negotiating, a fact that was sadly confirmed by the assassination of Yitzhak Rabin at the end of a rally in support for the Oslo accords. In the weeks leading up to Rabin’s murder, certain Israeli politicians adopted such an overtly anti-negotiations position that three rabbis from the West Bank went as far as suggesting that it would be acceptable to kill Rabin.

Which brings me to why I chose to insert a metaphor into my movie, and to intercut key moments of the film with the Batsheva dance piece, Echad Mi Odea, created by Ohad Narahin way after the Entebbe raid (a poetic liberty for sure). I won’t spell out the metaphor as it occurred to me, since a spelled-out metaphor loses its magic. But pay attention to the dance. The performers, dressed in traditional clothes, sing and dance to a Passover song. Their movements allude to self-inflicted pain. As the piece progresses, they strip themselves of their garments. The only dancer who doesn’t do this keeps falling from his chair over and over again.