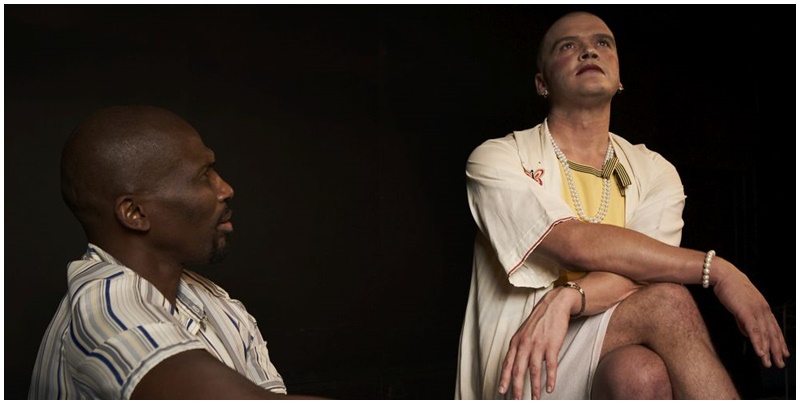 Celebrating the return to live theatre in South Africa, Marcel Puig’s extraordinary play, Kiss of the Spider Woman, directed by the multi-award winning Sylvaine Strike, is on at The Baxter Golden Arrow Studio in January 2022.

“While we now exist in a time where confinement and lockdown are a part of our everyday vocabulary, we also live in a world where it is crucial to re-examine and expand our limited understanding of gender politics,” says Strike. “The choice to stage this seminal play in today’s revolutionary climate seems obvious and necessary.”

Originally written in Spanish in 1972 by Puig, translated into English by Allan Baker, Kiss of the Spider Woman.

Forty-five years since it was first penned, Kiss of the Spider Woman weaves an alluring exploration of sexual and societal norms, examining the power of escapism through the imagination and magnifying the web that it is woven between identity and sexuality.

It has captured the attention of audiences for its romantic drama, political outcry and postmodern style portrayed through its two characters, Molina and Valentin. It was adapted for the stage in 1983. The 1985 film version of the play, starring William Hurt and Raul Julia,  also received widespread critical acclaim.

The plot follows two cellmates who pass their time in a prison, by remembering and reinventing classics of the silver screen. What at first seems to be a simple and straightforward – if not casual – story of two people who appear to be opposites (the romantic and the revolutionary), instead reveals a story of political intrigue and double-crossing. Starting out as a contest between two opposite personalities, it soon expands into a choice between two completely different attitudes to life. The choice is not sexual, although for a long time it seems so. It is between freedom and slavery.

Daniel Dercksen shares a few thoughts with the director and cast

In recent years at The Baxter, Strike has directed hugely acclaimed productions such as Endgame, Curse of the Starving Class, Tartuffe, Tobacco and The Miser. In 2019 she was awarded the prestigious Chevalier de l’ordre des Arts et des Lettres (Knight of the Order of Arts and Letters) by the French Government and is a former Standard Bank Young Artist for Drama winner and Featured Artist of the National Arts Festival.

Strike directs a stellar in Kiss Of The Spider Woman with Mbulelo Grootboom (Rainbow Scars, Iagos Last Dance, Hamlet) as Valentin and Wessel Pretorius (Ont, Die Ontelbare 48, Balbesit) as Molina, in this journey of self-awareness, intrigue, romance, revolution, love and betrayal, with lighting design by Mannie Manim, set and costume design by Wolf Britz and music by Brendan Jury.

How do you see Marcel Puig’s classic Kiss of the Spider Woman in a South African context?

Sylvaine Strike: Being a classic (for all the reasons this play has come to be one) Kiss of the Spider Woman is universally relevant, perhaps now more than ever. South African audiences will draw their own parallels to it. The mere fact that a black heterosexual male shares a prison cell with a white male who identifies as female, escalates the focus on the complexities we hold as South Africans in terms of race and gender politics. Originally written to take place in a prison in Beunos Aires Argentina, I have made a point of not setting this production in any specific context, be it geographic or political, as I believe the liminal space offers more to the imagination and audiences can invest in this story, knowing that it could be unfolding anywhere in the world.

Wessel Pretorius: Kiss was written during a time of political upheaval in Argentina (1970’s). South Africa’s political and social situation was also reaching a boiling point around this time. Sylvaine (Strike, our director) and Wolf Britz (our designer) decided to keep the era 70’s/80’s without pinpointing the setting – to keep it both universal but relatable to our country. I think the semiotics of me and Mbubelo’s skins, our accents and sense of humour is also quite telling without spelling it out. Then there is the added element of having a traditionally masculine figure next to a queer body and the negotiations around that which is currently a very relevant and important topic.

Mbulelo Grootboom: The play is so relevant in South Africa because of the issue of ‘othering’ or ‘otherness’. Minority groups such as the LGBTQ+ community and the discrimination they continue to face is something we need to continue to address.

What do you think makes Kiss of the Spider Woman such a powerful play?

Sylvaine Strike: Its timeless relevance as a piece about human nature and the need for connection.

Wessel Pretorius: In its essence it is a meditation on human connection and how much we need it. Two vastly opposing characters are forced to share a cell and manage, through sheer need for contact, to bridge their differences.

Mbulelo Grootboom: The themes of the play remain relevant because the issues raised are still those faced in South Africa.

It also carries a theme that most people can easily identify with, finding ways to escape what imprisons us. Your views on this?

Sylvaine Strike: In the recent context of our own experience of lockdown and confinement, we have become acutely aware of the measures humans can go to in order to escape a mental and physical imprisonment. This is a timeless theme of course, but I believe we understand it better now.

Wessel Pretorius: What is uncovered throughout is the idea that for both characters life outside is also a prison. Valentin finds his escape from reality through politics, philosophy and a cause. Molina finds his through aesthetics and film. They employ the exact same mediums of escape inside the prison.

Mbulelo Grootboom: People crave escapism because life can often become too much. The hardships faced by many causes us to feel the need to break free from what might be holding us back.

Do you think Valentin and Molina can survive without each other?

Sylvaine Strike: In the world beyond the prison, Valentin and Molina’s paths would never have crossed. They are destined to meet in a space from which they cannot escape, forcing them to understand one another and even like each other despite being opposite personalities with entirely different belief systems.  They will survive without each other yes, but they are forever altered.

Mbulelo Grootboom: Valentin is a conundrum, an enigma, a contradiction – but aren’t we all? He is a political prisoner who believes in Marxism but tends to fall for classy, sophisticated woman. They need each other to survive and at the end of the day they need the human comfort. I relate to him because he puts up walls to cover his soft and sensitive nature.

Wessel Pretorius: I find it incredibly liberating to play Molina. They are deeply emotional but use storytelling and romanticization to protect themselves – something all performers can relate to. Sylvaine has also added many layers to the character that has made it thrilling to try and get inside their skin.  Molina, like myself, loves movies, romance, drama and all things pretty. They would sacrifice anything for the people they love. I would also take a bullet for someone I’ve decided to love. But I also believe, growing up gay (certainly for particular generations) can cause an innate sense of isolation and loneliness that Molina definitely battles with.

I think Molina’s emotional survival depends on Valentin, yes. But Molina has fended for themselves since childhood and has had to grow a thick skin. This is a time before pronouns and nuanced rhetoric in regards to gender politics. It is through Valentin that the audience also gets to ask questions and develop empathy for something they might not understand. What develops between them is a bond and a friendship that carries them both through their sentence.

What do you hope audiences will get from watching Kiss of the Spider Woman?

Sylvaine Strike: I hope they are highly entertained, rejoice in the return of live theatre, relish in discovering Valentin and Molina and delight in witnessing their complexity unfold into an unlikely friendship. I am certain that no one can watch this play and remain unmoved by the lesson we are taught from it:  that our differences, our othering, mean very little when we realise, we need one another.

Do you think South African theatre will be the same after the pandemic that has crippled many theatres?

Sylvaine Strike: Theatre has and will survive, always. It is an ancient and necessary essential service for the soul.

Wessel Pretorius: I’ve learned two things about theater during this pandemic. Theater practitioners in South Africa are very very resilient and audiences miss and crave theater when it suddenly not available. Much like the themes of Kiss, theater is basically the most direct and immediate way we can connect with other beings and their stories.

Mbulelo Grootboom: I don’t think that South African theatre will be the same. Artists will find a creative and innovative ways to make sense of the pandemic. It happened after 1994 and it will happen again. Theatre will evolve to become more resilient and make sense of the uncertainty.