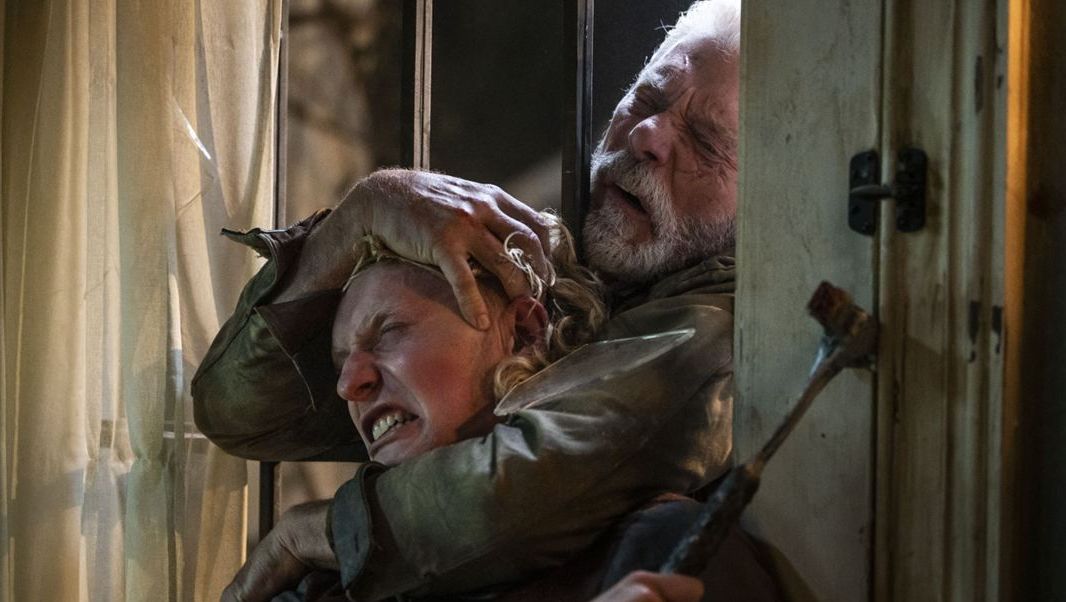 For Uruguayan filmmaker Fede Alvarez, who directed Don’t Breathe which he co-wrote with Rodo Sayagues, who now sits in the director’s seat for Don’t Breathe 2, the sequel came out of a place of trying to surprise themselves and the audience“We didn’t want to do a sequel where it was ‘the same again, bigger.’ We are telling a completely different story that poses the same questions – how does the audience feel about this character and what he’s doing. Like any good thriller, it’s a riddle – every scene is a clue, and you have to put it together.”

The 2016 thriller Don’t Breathe played with the very idea of whom moviegoers were supposed to be rooting for. The movie introduced audiences to Norman Nordstrom (Stephen Lang): three teenagers invade his home to take his money but unwittingly reveal that the home is really a trap full of dark secrets. Norman unveils his skills as a killing machine to fend them off… But just when you’re comfortable rooting for a blind man to defend his home and himself, Norman’s own monstrous deeds are brought to light – and moviegoers find themselves rooting for the teenage thieves they’d previously written off.

With Don’t Breathe 2, Norman Nordstrom is back again, and a man who has led his life by violent means will find they lead to violent ends. Norman has done evil things – unforgivable things – and he will face the consequences, though maybe not in the way audiences see coming.

With Don’t Breathe 2, the filmmakers explore Norman as an anti-villain – a twisted, misguided man who thinks he’s doing the right thing, but ultimately, there’s no hiding who he really is. “His moral compass is completely broken,” says Lang. “I think most people think they’re in the right – villains don’t know they’re villains. But this character has been beaten down so many times, and his will to survive is so strong, that he can no longer tell the difference between what is right and what is not. For him, there’s only survival, or not.”

In the sequel, it’s eight years after the horrific events of Don’t Breathe, and Norman now lives with 11-year-old Phoenix, the daughter he’s always wanted. Norman hides his evil past from her, and his parenting style is highly overprotective – he’s strangely committed to teaching her survivalist skills. When a new threat comes to his home – with intruders clearly coming after Phoenix – the monster inside Norman will be unleashed again… this time, revealing new sides to him.

“Norman was by far the most interesting character in the first movie,” says Sayagues. “We realized there’s something that’s never been done before, which is to take the villain from a movie and tell his story in the front seat. We could never make him the hero – he isn’t heroic – but we could tell a story from his point of view…We thought that was a lot of fun – let’s further explore this guy’s life and character, and let’s tell his story about what happened to him after the first movie.”

It’s a chance to do the kind of character exploration that movies don’t always offer. “We’re expanding the character, dwelling deep into his heart and soul, into his psyche. What makes this guy unique?” says Sayagues. Audiences know the character’s incredible abilities and dangerous morality – but his relationship with his daughter will show them something else. “He’s very tough on Phoenix – putting her through a military training routine – but he also clearly cares for her and genuinely loves her. This little girl is all that matters in his life.”

Stephen Lang returns to the role of Norman. “Stephen Lang created a crazy, iconic character in the first movie,” says Alvarez. “In his approach, Norman became super aggressive, but also vulnerable. And the audience underestimates him as much as the characters do – you think, well, he’s visually impaired, this guy is done for, and then he proves more capable than you could ever imagine.”

Lang says that the war injuries that resulted in his blindness – along with the other traumas he’s suffered in the past – have left him with damage that goes way beyond his eyesight. “Spiritual, emotional, and mental damage – that’s who he is,” says the actor. “He’s been living off the grid for a long, long time. He has no use for the world at large – it hasn’t treated him well. Like a dog that’s been knocked around – if you try to pet it, he’ll bite your hand off.”

Now that he has Phoenix, Norman puts on a show of being different, but his true nature always comes out. “Norman and Phoenix are living a very strange life,” says Alvarez. “He’s the ultimate helicopter parent – he controls every minute of her life. But there’s also a strange chemistry between them – something really appealing about their relationship. He deeply loves her, but he’s so afraid of losing her and is going to do whatever it takes to keep it that way.”

“He’s taken all precautions, but now he will defend this girl with his life,” says Sayagues. “He’ll have to leave his home, his safe haven, which is the most challenging thing for a guy like him.”

Knowing that his own actions have put her in danger, Norman’s overbearing control has been a relentless training, so that she is as self-sufficient as he is. “He wants to make sure she’s capable if a threat comes,” says Alvarez. “And obviously, the threats do come.”

Of course, nothing in Norman’s life is what it seems at first – not his relationship with Phoenix, and not the intruders who enter his home. Just as in Don’t Breathe, Sayagues will turn the tables on the audience. “Norman knows there might be people looking for this girl, because there’s more to this relationship than meets the eye,” says Sayagues. “He’s been expecting something like this to happen, so he’s training her to defend herself and not trust anyone. Norman knows why these intruders are so hellbent on finding Phoenix, even as Norman proves that it won’t be an easy job.”

“Any parent teaches by example – you teach a child what a parent knows,” says Lang. “Norman’s experience is that the world is a pretty vicious place. What he has to give is survival technique – and I think it’s altogether a legitimate thing to do.”

Phoenix follows in a long tradition in thrillers – from Death Wish and Straw Dogs to Aliens to The Hateful Eight and Hannah – of characters who have to become their own heroes when there is no one to save them but themselves. “It was important to us to create a character with agency,” Sayagues explains, “a young girl who is empowered, who can rise to the moment and use the skills that have been drilled into her. She will be her own savior to create a better life for herself.”

Because Norman has trained Phoenix to have skills, it’s a chance for the young actress Madelyn Grace to show what she’s capable of doing. “She does some amazing things,” says Sayagues. “Madelyn not only has amazing acting skills, but she’s very physically capable. I’m dying to see how people react to her.”

“It’s funny,” Sayagues continues, “Stephen Lang has decades of experience working with the best actors and directors, and Madelyn is just starting, but she has the same talent, the same fire, the same passion. The role is very demanding – running, swimming, acting underwater, so much, and she did it all with a smile and striving for more. She’s also very smart – even though she was only 11 years old when we shot the movie, she was able to understand and integrate so many of the themes of the movie into her performance.”

“She can go toe-to-toe with Stephen Lang,” notes Alvarez. And, agreeing with Sayagues, he notes it’s a very physical performance, one that required a lot of action from the young actress. “One of the ways Rodo creates tension in the movie is with long shots and very few cuts that don’t give a chance for stunt doubles to come in. Madelyn was a sport – more than that, she was eager to do everything we asked her to do.”

“Back in the 70s, I’d watch gymnasts – Olga Korbut and Nadia Comeneci – do remarkable, flawless routines, and the announcer would say, ‘She’s got a 14-year-old’s nerves.’ Madelyn is like that,” says Lang. “She’s a wonderful child, vivacious, chatty, and when Rodo said ‘Action,’ she’d turn on a wonderful performance, with depth, belief, and being.”

In the end, the audience will again have to decide for themselves how they feel about Norman and what he’s done – and that’s exactly what the filmmakers intend.

“Movies where you know who the heroes are, who the villains are – they have no intrigue,” says Alvarez. “You know going in who’s going to win, who deserves to win, who deserves to die. But the world of Don’t Breathe is shades of gray and some really dark blacks. We try very hard to tell new, original stories that you haven’t seen a million times. We tell the story fair – and where you put the characters is up to you.”