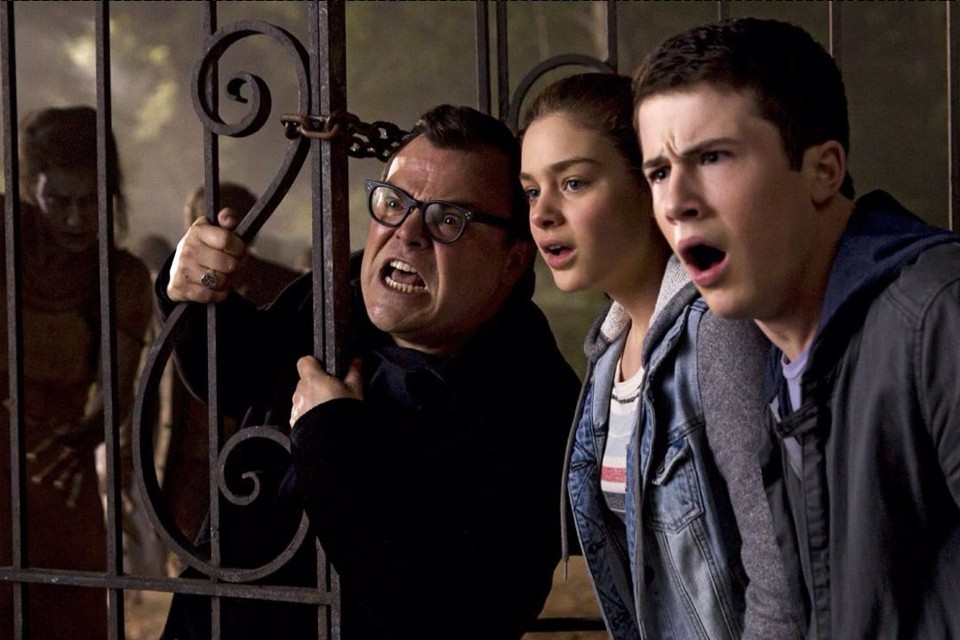 Following the huge success of the first Goosebumps film, the filmmakers behind Goosebumps 2: Haunted Halloween decided that instead of limiting themselves to the stories in the 200 books in the Goosebumps library, they would bring an original story to the screen, an adventure inspired by the cherished series.

Says R.L. Stine, “No one ever taught me a formula for writing books. The formula for Goosebumps is to make real kids, believable kids. Once you have that element, you can really go crazy with the plot.”

As for building on his legacy, Stine expresses a gracious encouragement to the screenwriter Rob Lieber: “It’s very exciting to write something and also get to see what other people create with that inspiration – what direction they go.”

The books always shone a spotlight on young, brave, smart heroes – kids who stepped up when the need arose to take down monsters. Rob Lieber consciously honored that element when crafting the screenplay.

Rob Lieber is a writer and producer whose credits include Sony Pictures’ Peter Rabbit, Disney’s Alexander and the Terrible, Horrible, No Good, Very Bad Day, and ABC’s “The Goldbergs.”

Currently, he is working on film projects with Ron Howard, Imagine Entertainment and Animal Logic Entertainment, as well as Ben Stiller and Red Hour Productions.

In addition to co-writing Peter Rabbit, he also served as an Executive Producer.

After 25 years, the acclaimed, beloved Goosebumps series is obviously nothing to shiver at.

Over 400 million books in print. Translated into 35 languages. Countless haunts, spooks, thrills, and laughs, for millions of kids and adults alike, which has made R.L. Stine one of the bestselling children’s authors in history. Plus, the series’ fan base keeps growing, and the critical raves continue.

And now, on the heels of a hit Goosebumps movie that opened at #1 and took in more than $150 million worldwide, the eagerly awaited, delightfully frightful sequel Goosebumps 2: Haunted Halloween is ready to hit the big screen just in time for Halloween, offering up a trick-filled movie treat for audiences of all ages.

Directed by Ari Sandel from a screenplay by Rob Lieber, from  a story by Rob Lieber and Darren Lemke – based on The Goosebumps Books written by R.L. Stine – it follows the Quinn family into an entirely new set of spooky, exciting, and funny events.  Rejected in his obsessive need to be a member of the Quinn household, a mischievous ventriloquist dummy decides to build his own “family” by kidnapping Kathy and bringing all of his Halloween friends back to life. As Halloween transforms their sleepy town into a full-on monster mash-up, boasting such hilariously freaky creatures as giant gummy bears and creepy garden gnomes, Sarah and the boys team up to save Kathy and the town from Slappy’s wicked plan.

R.L. Stine (Based On The Goosebumps Books Written By) is one of the best-selling children’s authors in history. In July 1992, Scholastic introduced his Goosebumps book series with Welcome to Dead House. Nearly twenty-five years later, Goosebumps is now one of the best-selling children’s series of all-time—with more than 350 million English language books in print, plus an additional 50+ million international copies in print in 24 languages. The Goosebumps series made R.L. Stine a worldwide publishing celebrity (and “Jeopardy!” answer). His other popular children’s book series include Fear Street (recently revived with all new books), Mostly Ghostly, The Nightmare Room, and Rotten School. Other titles include: It’s the First Day of School Forever, A Midsummer Night’s Scream, Young Scrooge, and two picture books illustrated by Marc Brown—The Little Shop of Monsters and Mary McScary.

The “Goosebumps” TV show was the number-one children’s show in America for three years. The episodes can still be seen on Netflix. More recently, Stine’s anthology TV series, “R.L. Stine’s The Haunting Hour,” won the Emmy Award three years in a row as Best Children’s Show.

What do you still love about writing, and especially writing horror?

STINE: I know. Why? Why do I like it so much? I started when I was nine. I was this weird kid, in my room typing. I’d be in typing, writing little joke magazines, and writing stories for hours. I don’t know why I liked it so much. My mother would be at the door. She’d say, “What’s wrong with you? Go outside and play. Go outside.” Horrible advice, right?  But no, I just like it, I still do it. I wrote 2000 words this morning on a new Goosebumps book.  We just signed on to do six more Goosebumps.  It’s a lot of fun. I get to scare a lot of generations, right?

What do you think is the hook that sticks with all these generations?

I guess it’s horror. I think people like to be scared. And people always say, “Well, how have kids changed? How have things changed?”, since I’ve been doing this. The kids don’t really change. The only thing that’s changed is the technology. That always changes. But the fears never change. Being afraid of the dark, or being afraid of being lost somewhere, or something’s waiting for you. That never changes. That’s the same as when I was a kid. That never changes. And I think that helps explain the longevity of Goosebumps. 26 years is a long time for a series, right?

It’s a really long time. It’s kind of amazing What do you think is the essence of the Goosebumps brand of horror that’s made it so durable?

The essence, gee. Is the teasingness of it, I think. The twists and the surprises. There’s always one part, place in a Goosebumps book where it totally turns around. And the reader says, “Oh my god, I didn’t know that. I was totally fooled.” I think they like that.

What is your approach to nailing the right ending? Because you deal in so many sub-genres. How do you know you’ve got the right ending for a werewolf book, or a ghost book, or whatever it may be?

It actually, it has to be a happy ending. They absolutely insist on happy endings to these books. And then there can be like a little twist, something that throws it off a little bit. But they all have to be happy. Once I wrote a Fear Street that didn’t have a happy ending. You know, the teenage series? And in the end of the Fear Street book, the good girl gets carried off as a murderer, and the murderer … I wrote this just for fun for me, and it had an unhappy ending and kids hated it. They turned on me immediately. And I started getting mail. “Dear RL, you moron. How could you write that? You idiot. Are you going to write a sequel to finish the story?”

In every school I went, some kid would raise their hand and say, “That book you wrote, why did you do that?”  I never did it again.

It feels like that’s the total opposite of writing horror for adults. You’re supposed to sort of leave them down.

When it comes to your writing, you’ve spoken about how you’re big into outlining and planning. I’m curious, how’d you get started on that practice and why do you stick to it all these years later?

I can’t work without an outline now. I have to know what’s happening. Before I write the book, I have to know everything that’s gonna happen in the book. And the actual truth is that the outline was required by my editors. They wanted to approve the outline before I wrote the book. And that’s how it got started. It wasn’t really, the outlines weren’t really for me. They were to get a story approved so then I could write. And that’s really how it started. A lot of times, and even recently, I have a Goosebumps coming out about robotics called It’s Alive! It’s Alive!. And they hated, they totally rejected the outline. I think I had to do three different outlines before they liked the story. So, I’m still doing it.

And that’s the main reason it happened. Now I just, it makes writing so much easier if you’ve already done all the work. It makes it so much more fun and you never get writer’s block, ’cause you know everything.

Right. Do you ever get surprised when you’re writing the scene and make a tweak to the outline? Or do you always stick exactly to it?

Sometimes. Sometimes you think of something you think is better. But I rely on them a lot.

What do you like reading right now? What’s keeping you hooked to the page?

I read mysteries and thrillers. I’m in the International Thriller Writers, this group of, we all get together, like 400 thriller writers every summer. And I read Michael Conley, and Lee Child, and Harlan Coben. And all those people. And I like old British mysteries. I read a lot of that. I love Agatha Christie and Ruth Rendell. People like that.

Was there a particular monster or creature you were excited to see them bring to life in this one?

Well, my favorite scene is the gummy bear scene. Who would think? That’s just wonderful. These adorable little gummy bears turning into monsters. I love that. And of course the giant balloon spider. That’s a great character. That’s really good.

Do you find that you have a set of characters that — obviously Slappy — but other than that, which characters or stories are people most excited to talk to you about?

No, it’s mostly Slappy. I think that’s one of my big failings is that I haven’t created a whole crew of other monsters. ‘Cause everyone just likes Slappy.