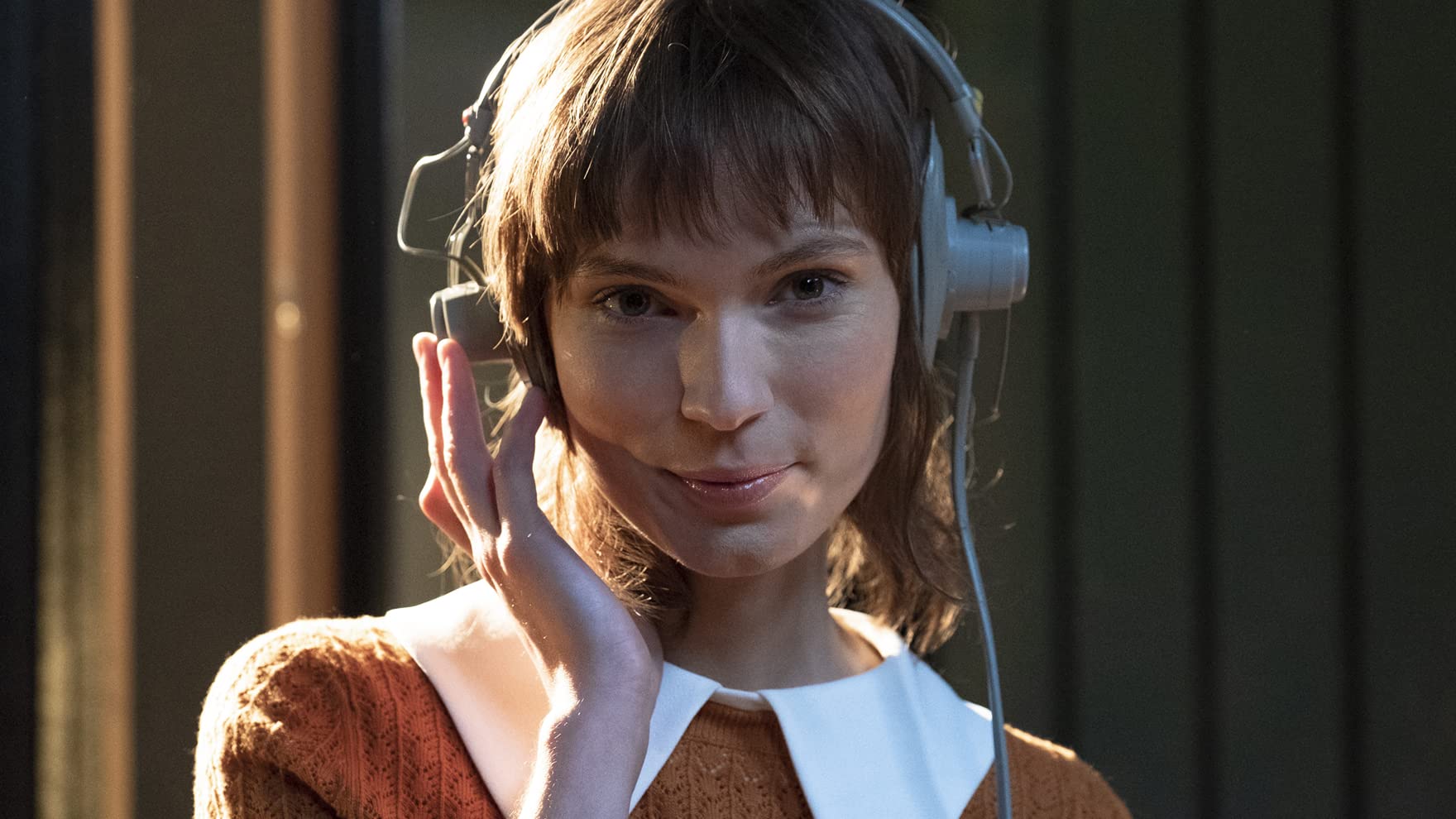 For the first time on screen, I Am Woman tells the inspiring story of singer Helen Reddy, who wrote and sang the song “I Am Woman” that became the anthem for the women’s movement in the 1970s.

The film is a story of fearless ambition and passion, of a woman who smashed through the patriarchal norms of her time to become the international singing superstar she always dreamed of being.

Helen Reddy is one of the most successful performing artists ever to emerge from Australia. A Grammy-award winning recording artist, she had 15 Top 40 singles in the US and went on to star in major films and stage productions as well as performing live to stadium audiences around the globe. Her 1972 smash hit song “I am Woman” became an anthem for a generation of women.

But few know Helen’s incredible life story. How she arrived in the US as a single mother of a small child, virtually penniless. How she climbed to the pinnacle of her career and, then, while still at the top of her game, walked away to pursue a different life.

Film director, Unjoo Moon, while knowing little of Helen’s later life, had powerful memories of the influence of Helen’s music – and particularly of “I Am Woman” – on her mother and her mother’s friends at the time it topped the charts. When she saw Helen’s name on a place card next to her husband, Oscar Award winning cinematographer Dion Beebe (born in South Africa), at an awards ceremony in Los Angeles a few years ago, she made a split decision to swap seats, setting in place a chain of events that lead to the production of I Am Woman, the film.

“The hardest screening that I was ever going to do on this movie was to show it to Helen, her family, to Jeff and to his current wife and his daughter- – not because of the film, but because it’s their lives,” says Unjoo. “It’s their legacy. It was quite an amazing and deeply emotional experience for all of us. I think everybody was very moved by seeing their story on the screen. Not just Helen and Jeff, but their extended families as well. “

“I told Helen early in development, ‘I can’t promise you that I’m going to get every line right, that I’m going to get every moment of your life into synchronist order. There will be things artistic changes for storytelling, but the one thing I can promise you is that I will really honour the spirit of your life and the spirit of what your journey has been.’ And I think we’ve really done that,” says Unjoo.

“Unjoo and I wanted a woman with a love of music to write the movie,” says producer Rosemary Blight. “Emma had a real passion and understanding of music which was important to us, as the film was not a musical, but had a lot of music in it. We talked to Emma, who was very excited, and she and Unjoo then flew to Las Vegas to see one of Helen’s last shows in Las Vegas together.”

Emma Jensen is a screenwriter with 20 years’ experience in the film industry in Australia, the UK and the US. After graduating from the Queensland College of Art with a Bachelor of Visual Arts in Film and Television Production, Emma began her career in the production department of UK company FilmFour before returning to Australia where she was employed as Development Executive for Working Title Australia and Mushroom Pictures and worked as a freelance script editor.

Emma segued into writing while living in Los Angeles, and in 2013 wrote the feature film Mary Shelley, based on the true story of author Mary Shelley and her journey to write “Frankenstein”. Optioned by US producer Amy Baer of Gidden Media, the movie was directed by Haifaa Al-Mansour and starred an international cast of Elle Fanning, Douglas Booth, Bel Powley, Tom Sturridge, Ben Hardy, Maisie Williams and Stephen Dillaine. Mary Shelley premiered in the Gala Presentation section at the 2017 Toronto International Film Festival and was released worldwide in 2018. A.O. Scott of the New York Times declared Mary Shelley, “a rarity, a literary biopic with an argument” and Variety described it as “suffused with righteous feminist fire.”

Emma is currently developing a television series with Goalpost Pictures and writing the feature film Living with Miss G for producer Lisa Shaunessy’s Arcadia Films. Emma is also a member of Screen Australia’s Gender Matters Task Force, which advocates for gender equality within the film industry and the representation of women in front of and behind the screen.

Born in South Korea and raised in Australia, Unjoo Moon studied Arts/Law at the University of NSW before working at ABC TV as an on air reporter. Her passion for story telling led her to the Australian Film Television & Radio School (AFTRS) where she not only won the Kenneth Myer Producing award but where she also met her partner, Oscar winning cinematographer Dion Beebe. Together they moved to Los Angeles where Unjoo attended the American Film Institute, graduating with a master of fine arts and the Franklin J Schaffner Directing Award. Unjoo has directed and produced many award winning short films, music videos, commercials and documentaries which have screened internationally at film festivals and on network television.  Her feature documentary The Zen of Bennett (described by the New York Times as a “tender, touching documentary portrait of the singer Tony Bennett”) was released theatrically and has streamed on both Netflix and Amazon. Unjoo’s PSA video on gun violence, “The Wrong Side of History” with spoken word artist In-Q has been viewed over 50 million times on social media and continues to keep the conversation going on gun reform. I Am Woman is Unjoo’s narrative feature directorial debut.

Six years ago during an awards season event in Los Angeles I arrived at my table and noticed a woman sitting quietly on the other side. She looked familiar, but I wasn’t entirely sure why. The moment I realized who she was, I immediately swapped seats so that I could sit next to her because out of everyone in that star-studded Hollywood ballroom, Helen Reddy was the one person I wanted to meet.

I was not old enough to have ever attended a Helen Reddy concert, or to have known too many of the details of her career, but even as a young child I have vivid memories of the way my mother and her friends used to talk about Helen. The 1970’s were a time of change – for everything – fashion, music, food, politics, relationships and most importantly, the roles of women were being questioned and challenged. Women were having careers, becoming financially independent, and getting divorced.

Even then I knew that somehow Helen Reddy seemed to be an important part of this change. When her songs came on the radio, my mother and her friends would immediately turn up the volume, wind down the windows in their station wagons and let their hair loose in the breeze. And then there were the rallies where women marched for equal rights, equal pay and linked arms to sing and declare “I am woman, hear me roar…”. It wasn’t until later in life that I began to fully understand the impact of the women’s movement and how it fundamentally changed so many things for women all over the world.

And here I was, many years later in Hollywood, sitting next to Helen Reddy, an absolute icon of this time. Even before we had finished our main course, I knew that Helen had an extraordinary story. She was a single mother who, against all adversity, was determined to make her dream come true. She would fight to go to America, to become an international star – and reached her goal far beyond anyone’s expectations, even her own. She not only became the most successful female recording artist of her time, but she also broke stereotypes and led the way during the most crucial period of the women’s liberation movement. She not only paved the way for Australian artists who wanted to make an impact internationally but she became a role model for what all women could achieve.

As I learnt more about Helen and spent more time with her, she often spoke of her friendship with journalist Lillian Roxon, another groundbreaking Australian woman known as the “mother of rock”.

Lillian was the one who encouraged Helen to write and find the words that reflected her life because the truth would always resonate. Lillian also taught Helen about feminism, and the rise and fall of their friendship is in some ways a metaphor for the struggles that besieged the women’s movement. Their friendship was crucial to the writing of “I am Woman”, the song that would become an enduring anthem for all women.

But in order to succeed, Helen still had to battle the sexism of the time, the music industry and even her own marriage to her manager, Jeff Wald.

As I researched this period of Helen’s life I became absolutely fascinated with her relationship with Jeff and the stories of his legendary cocaine addiction. When I eventually met Jeff (who Helen would only refer to as Number 2 at that time), I began to understand the incredible and complex journey these two had taken together. Theirs was an extraordinary love story set against a period of upheaval and change. The eventual collapse of this relationship touched me deeply and became the cornerstone of her story.

Throughout the development and production of this film I have always kept in mind the complex feeling and emotion that Helen’s music has given her audience.

People, especially women, have strongly identified with her number one hits “I am Woman”, “I Don’t Know How to Love Him”, “Delta Dawn” and “Angie Baby”. These lyrics meant something to them and they identified with Helen.

In making this film I realized our audience needed to experience the same kind of emotional connection and by placing these songs at key moments in her life, I wanted her music to be an integral part of telling her story.

When I started this journey I could never have predicted that a new wave of women’s marches would once again rise up around the world and I certainly could not have foreseen the #MeToo campaign that would bring the conversation of sexism powerfully back into focus.

What started as a beautiful, touching biopic about the queen of “housewife rock” and the music that captured the spirit of an era, has now become even more poignant and deeply relevant to a whole new generation of people.

Helen Reddy was born in 1941 in Melbourne, Australia into a vaudevillian family. After overcoming years of setbacks and facing numerous obstacles as a woman in the male-dominated music industry, Helen went on to become one of Australia’s most successful international recording artists and an icon of the feminist movement.

In a 2008 interview, Reddy described the song “I Am Woman” as her “greatest achievement”. She found strength in feminism as an active member of the woman’s liberation movement. During this time, she began looking for songs to record that matched the sense of empowerment she felt as a member of the movement but couldn’t find any – so decided to write one herself. Completing the lyrics herself, she worked with Australian singer-songwriter Ray Burton to find the right melody and the song became a #1 hit.

Over the next five years she had more than a dozen other US Top 40 hits, including two more #1 hits. She became a frequent guest on U.S. television variety shows, hosted her own primetime program The Helen Reddy Show in the 1970s and was one of the most recognisable headline acts in the United States.