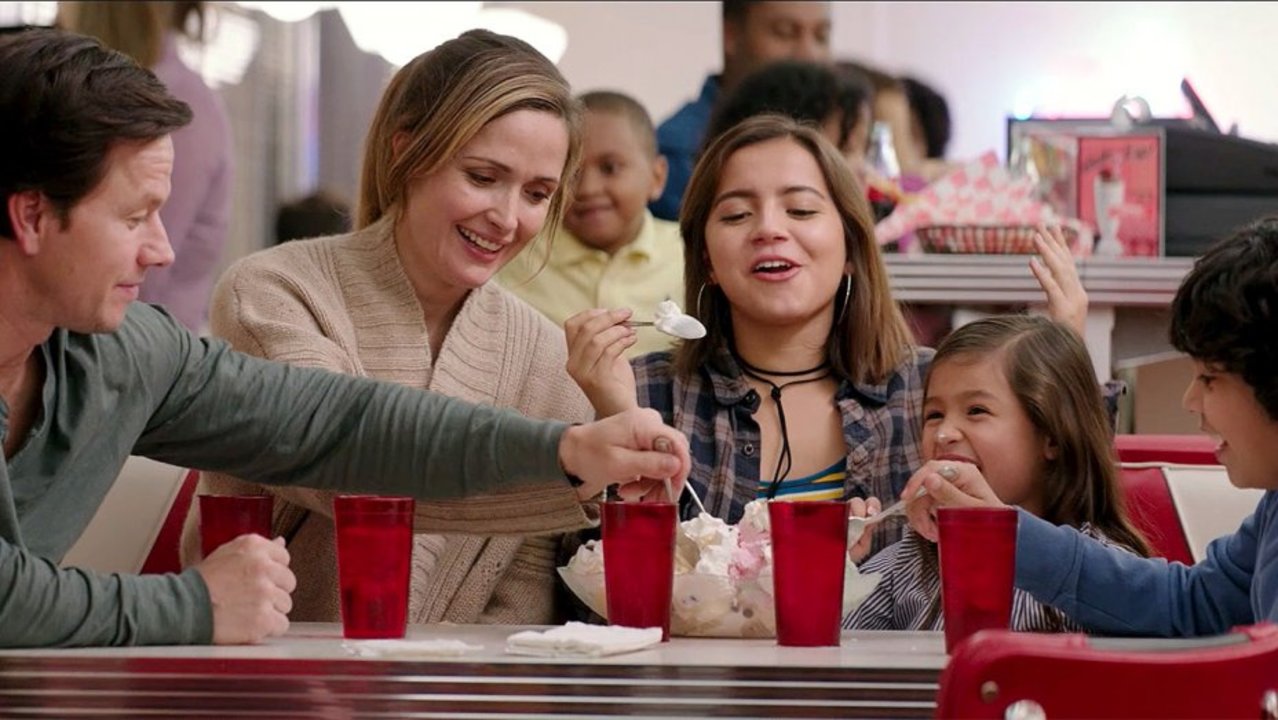 “I hope that this movie helps lead to kids finding families and homes.”

Instant Family is inspired by the real events from the life of writer/director/producer Sean Anders, celebrating the notion that a family can come from anywhere.

While foster care adoption can be a serious matter for a film, Anders is also comfortable with also highlighting the lighthearted aspects because that is the personal story he wants to tell.

When Anders and his wife made the life altering decision to adopt three biological siblings from foster care “a lot of the things that happened were funny and a lot of it was frustrating. To go into a situation where you bring people into your home who all of a sudden become your children and you don’t even know them and they don’t know you, it is just like a comedy of manners right out of the gate.”

Anders began writing Instant Family with co-writer/producer John Morris in between their global smash hits Daddy’s Home and Daddy’s Home 2. Additionally, Anders and Morris co-wrote the 2013 hit comedy We’re The Millers for New Line Cinema, and the much anticipated Farrelly brothers’ sequel Dumb And Dumber To.

“I thought it would be great if John Morris (co-writer/producer) and I could make a comedy about this subject matter without it having to be a gut-wrenching drama that people would be afraid to see,, says Anders. “We could do the movie in this way because my real-life experience was funny, warm and heartbreaking. I hope that this movie helps lead to kids finding families and homes.”

“Years later (after adopting) when John and I decided to write the story, I went back and started talking to my old social worker and met with more families and kids. The comedy that appears in the film came together because a lot happened to me or to other people who shared their story and situations.”

When Pete (Mark Wahlberg) and Ellie (Rose Byrne) decide to start a family, they stumble into the world of adoption.  When they meet a trio of siblings, including a rebellious 15-year-old girl (Isabela Moner), they find themselves unexpectedly speeding from zero to three kids overnight.  Now, Pete and Ellie must hilariously try to learn the ropes of instant parenthood in the hopes of becoming a family.

Mark Wahlberg, who has now starred in three of Anders’ films, believes Sean’s personal experience will inform the movie. “I think it gives it an emotional anchor, and just an honesty and authenticity that makes it profoundly emotional and personal. And it’s something that everybody can identify with. And I think it’s going to be a very feel good movie in a time where people need to feel good.”

When Pete (Mark Wahlberg) and Ellie (Rose Byrne) decide to start a family, they stumble into the world of adoption.

Anders admits, “I’m not going to lie to you. I’m drawn to happy endings. Put me in front of a ‘Field of Dreams’ and I’m going to be a mess. I’m just that guy. To do a movie that has a really warm heart and can make people feel good, yet has a way to take people into some darker places, is honest. It is not fake or made up because I’ve met parents who have gone through journeys way harder than mine or the character’s in the movie. The one thing that they all have in common is that every one of them said they wouldn’t have it any other way. That was a reason why I just thought this is definitely a movie that can be a comedy and can be warm-hearted.”

Anders explains what compelled he and his wife to make the life changing decision to adopt and what the experience was like. He recalls: “It differed from our expectations in every way. Our journey started the exact way that the characters in the movie do. My wife and I were talking about whether or not we wanted to have kids. We had been having this conversation for years and then at one point I said I feel like I’m getting a little old to have kids. I don’t want to be that old dad that can’t throw the ball.”

And I said it as a joke to my wife ‘Why don’t we just adopt a five-year-old and then it’ll be like I got started five years ago.’ My wife said, ‘You know I would really consider that.’ And I said, ‘Yeah, I was really just kidding.’ Yet somehow a conversation sprang up out of that.”

“The adoption picnic that my wife and I went to was one of the craziest things I’ve ever been to in my life. You just don’t know how to engage in this situation…we are not supposed to go up to kids who we don’t know and talk to them! The fact that they even have these events is so weird. It was a very uncomfortable event to attend, but at the same time, it was really good for us, because it was one of the first times where we could look around and just see all these kids.”

When he first started writing the script Anders admits: “For the first couple of drafts I was picturing my family. But as we started to incorporate more stories from other families and the social workers, we started to make it more of an amalgamation of different people’s experiences. The characters became more inspired by my family, rather than being copies of my family.”

Co-writer/Producer John Morris explains, “It took about a year in total to write the script. We actually did Daddy’s Home and Daddy’s Home 2, writing a little bit of Instant Family between each film. We showed it to Mark Wahlberg and he loved it, signed on, and from there it just steamrolled.”

For his part, John Morris enjoyed collaborating with Anders on the script. “We used a lot of Sean’s mistakes for comedic purposes. Because his kids were so great, we had to embellish a little bit so we added a teenager. We based it on a woman we met named Maraide Green who came from foster care. We implemented some of her story into the script. She inspired us and gave us ideas. We brought her from LA to Atlanta where we shot and made her a consultant on the movie. She is fantastic.”

Anders and Morris gave Maraide a draft of their script to get her thoughts and Anders recalls: “She gave us a bunch of great notes and helped us dial it in a bit to make it more honest and, in some cases, brutally honest.” Some of what they added was lifted directly from Maraide’s real life.

“I was adopted when I was 13, before that I was in and out of the system,” says Green. “I first got taken away from my mom when I was eight because she was using drugs and she had abusive boyfriends. I ended up living in group homes and foster homes for a little while until I moved back with her. Everything was going good for a while but then she started using again. I ended up going back into the system and lived in a couple of foster homes. I had one where I lived for a while and I thought that I was going to get adopted but it ended up not working out so I got sent to another home and luckily, they adopted me.  So, I gained four new siblings and my parents and it’s good. I’m now 20 years old and I go to UCLA, which was my dream forever.”

Maraide recalls, “After I met Sean, he sent me the script, which was cool. I sent it back to him with a bunch of notes, saying this would never happen, this doesn’t make sense, etc. I love that he wanted it to be so honest. If you’ve been in the system and you see this movie, you’re just going to really connect to it because he made it so real.”

She continues, “I was excited that this movie is telling the story of kids in foster care without it being an intense drama. That’s what I like about it the most because you can laugh.”

Maraide hopes that the film might change the perception of kids in foster care. “Children that are in foster care are not weird or ruined or crazy little kids with all of these issues. They’re just kids. And they’ve gone through some hard stuff, but they’re still worth it, they can still make it, and they could still do all these incredible things if you love them.”

Some of the research and inspiration that Anders and Morris got while writing the film was from Allison Maxon, a social worker with the Kinship Center where Sean and his wife adopted their three children. Morris explains: “Allison helped by connecting us with parents who had adopted through the foster care system. We wanted both sides of the stories, so we spoke to both the adoptive parents and the children from the foster care system.”

Maxon adds: “Some of what you see Pete and Ellie going through in the movie are the real-life ups and downs that do happen to our families. There are parts in the film that are so real around what happens to our kids. Sean was able to capture that in the script. He wasn’t writing from the outside in. He was writing it based on his own experience. There is humor in it. There’s not always humor in foster care adoption.”

“I think the connection is really important. I think the best directors often make the same movie over and over, believes producer Marc Evans. “I think that Sean and John’s movies have always been about family in a way. Sean has lived experiences like these. Family can be the perfect nuclear family where the kids both have two parents still at home. Or, a family can be a group of friends who all made this film together. Or a family can be a couple who adopt a kid from the foster care system and make them part of their family.”

Anders admits Instant Family is a bit of a departure from his past films and knows there are sensitive issues and some tricky subject matters in this film. “I think we are handling the sensitive subjects by being honest about them, which can be difficult, as some of this stuff is harsh, ugly, or sad, but it’s all in there,” says Anders. “Unintentionally, I was doing preliminary research by going through foster classes and through meeting families and the kids. And at that time that I was doing all that, I wasn’t doing it for research for a script.”