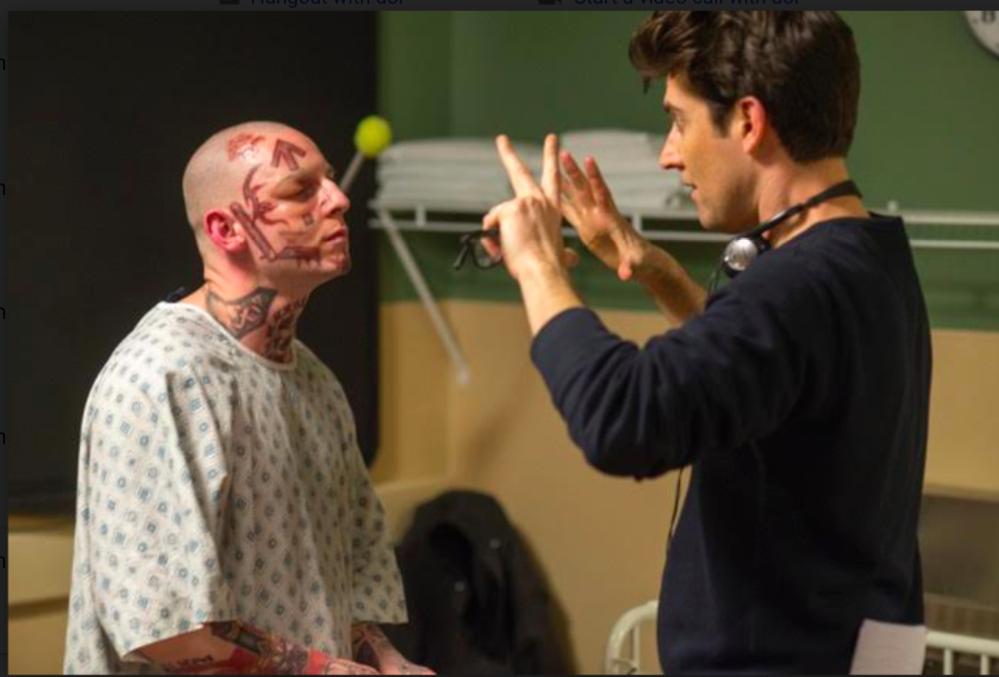 Inspired by the remarkable true story of Bryon Widner, Skin follows the life of a former skinhead group member, who endured over a year of painful operations to his face and body to remove the tattoos that tied him to his terrible past.

Written and directed by Guy Nattiv, an acclaimed writer/director from Tel Aviv, Israel, this controversial film stars Jamie Bell as a destitute young man, raised by racist skinheads and notorious among white supremacists, who turns his back on hatred and violence to transform his life, with the help of a black activist and the woman he loves.

Nattiv is an accomplished commercial director for more than ten years, shooting campaigns around the world for Coca-Cola, Diet Coke, Nestle, Skoda, and Mercedes amongst many others.

His first feature, Strangers, premiered at the Sundance & Tribeca Film Festivals in 2008. It was based on his short film “Strangers” (with Erez Tadmor) that won best short at Sundance two years earlier. It was short-listed for the Academy Awards, and won over 20 festivals world-wide. His second feature, The Flood (Mabul)” won the top prize at the Berlin Film Festival in 2011, two awards at the Thesaloniki film festivals, best film at Haifa Film Festival and was nominated for 6 Israeli Academy Awards. His third film, Magic Men (with Erez Tadmor), was shot in Greece and premiered at the Palm Springs Film Festival in 2014. It won “Best Actor” in the Israeli Academy and the Audience Award at the MAUI film festival.

Q & A with Guy Nattiv

How did you become aware of this story?

My now wife and producing partner, Jamie Ray Newman, and I were in a long distance relationship and engaged. At the time, I knew I was going to move to the States, so I was looking for a story that might interest me for my first American film.

In 2012, I was sitting in a coffee shop in TLV reading the newspaper when I saw the photos of Bryon Widner – this crazy, fascinating former Neo-Nazi skinhead – whose face used to be covered with tattoos, but who had undergone the incredibly painful process of having them removed to cleanse himself both physically and emotionally.

As a grandchild of four Holocaust survivors, I immediately wanted to know more. I showed the article to my grandfather, who was my main inspiration, and he encouraged me to pursue the story.

My grandfather, without a shred of hesitation, said, “These are the stories the world needs more of.”

So Jaime and I tracked Bryon down. This proved to be challenging, as he’s obviously hard to find, and he told me to meet him at a diner off the freeway.

I flew in from Israel, not having a clue if Bryon would show. But he did. I was hesitant because I had never met a former skinhead before, but we ended up sitting together for four days, bonding more than either of us had ever anticipated.

This is your first U.S. feature film, why tell this story now?

We live in a crazy time. People have lost hope. “Peace” and “Love” are such random words right now. Violence and hatred are around us 24/7.

When I read Bryon’s story in 2012, America was different; but I recognized the seeds of calamity about to burst.

I felt that telling such a rare story, of a damaged man who underwent a seemingly impossible physical and mental change, was vital. Some people deserve a second chance; it’s possible to find a way out.

I want to challenge the audience to find the forgiveness inside of them; to reach across the aisle, just like Daryle Lemont Jenkins did when he befriended, and ultimately saved, Bryon.

But it’s also more complicated than that.

Is violence etched into our DNA? Can we fully escape who we were brought up to be?

The story is an exploration of a very complicated man, and I certainly did not want to sugarcoat or simplify  his journey, because there is nothing simple about it.

What was your process in researching and writing the script?

Bryon Widner and Daryle Lemont Jenkins helped me a lot with the script. We met in person multiple times and engaged in deep discussions for hours and hours over the phone and Skype for four years.

In my research, I spoke with key people from the Southern Poverty Law Center who helped save Bryon. Also, Bill Brummell’s fantastic MSNBC documentary ERASING HATE was invaluable to me. Brummell lived with Bryon and his family on and off for two years while Bryon underwent his tattoo removal process.

When I started writing the script, Obama was elected for his second term. Many people thought that fascists and white power barely existed in America.

But unfortunately my research showed me that there really is a prominent layer of racism and violence in the backyard of America. Trump’s election has made people realize it, but my research for this film had made me aware of it long before.

Can you describe the casting process? Did you have actors in mind as you were writing the script?

I actually did not. It was a long process to find our right “Bryon.” The amazing Laura Rosenthal and her talented team helped me shape the Skin family very wisely.

I worked with the beautiful and talented Danielle MacDonald on my short film, SKIN, and was overwhelmed by her performance in PATTI CAKE$. I offered her the role of Julie. After Danielle joined, my producer Oren Moverman had the brilliant idea to bring Jamie Bell on board as Bryon.

’ve always adored Jamie’s work, vulnerability, talent and intelligence. I needed to make sure that he had the chops to become this ruthless, tough, damaged man. I drove to meet him in Virginia, where he was shooting “Turn.” We sat for a few hours and talked about ourselves, about life and the crazy world we live in. I saw a mature man who had the depth, charm and potential physicality to become Bryon. Someone who was fully committed to the role and unafraid to launch himself into a challenging and  dark role unliked anything he had every done before.

After Jamie joined, we started composing the rest of the family. I met Vera (who I adore) over Skype and the chemistry was immediate. It was very important to me that the rest of the characters be real and believable; undoubtably, Bill, Vera, and Louisa possess those qualities. When casting Daryle Lamont Jenkins, I knew he absolutely adored Luke Cage; he’s a massive comic book geek. When he found out Mike Colter would play him, he cried.

Can you describe Jamie Bell’s transformation and your experience working with him?

Jamie gave a riveting and often harrowing portrayal of Bryon, totally immersing himself in the role, and gaining 20 pounds in a short time. He met with the real Bryon and studied him.

He is the film’s emotional core: visceral and explosive. His performance is also a beautifully nuanced, detailed portrayal of a complex, conflicted and often brutal man. Jamie had a lot of freedom to improvise and bring his own self to the role. I trusted his process. He also did research, watched documentaries, looked at websites dedicated to tracking and studying these groups.

It took three and a half hours every day to turn himself into Bryon – tattoos, fake teeth, a tiny prosthetic for the nose, and contact lenses. Sometimes he would wear the tattoos overnight to save time in the morning. He walked around with full tattoos on – people didn’t look at him; they were embarrassed.

When I saw him as Bryon on the first day of filming, I got chills.