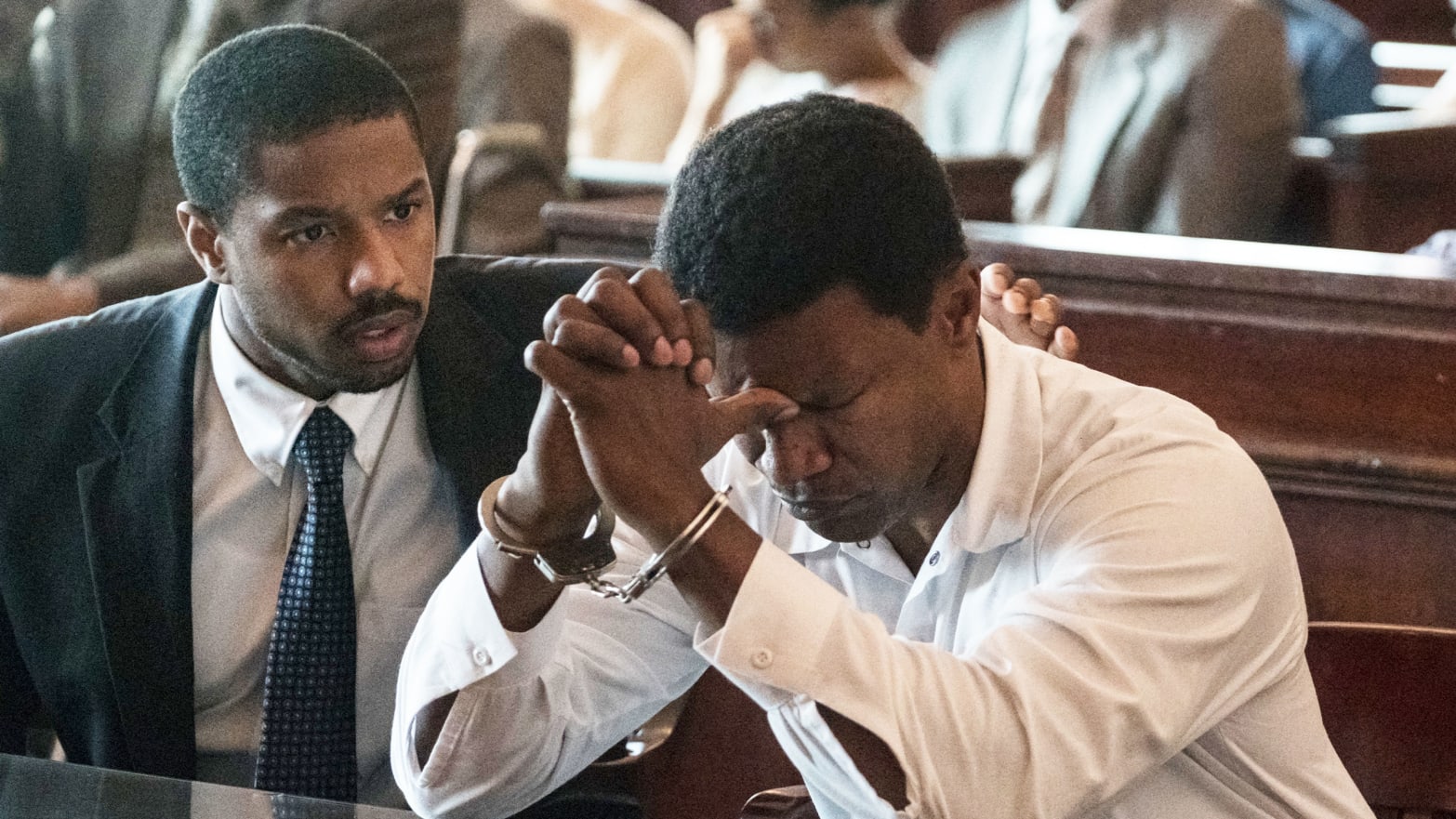 Award-winning filmmaker Destin Daniel Cretton brings one of the most important stories of our time to the big screen, directing Just Mercy from a screenplay he co-wrote, based on Bryan Stevenson’s bestselling memoir.

Cretton co-wrote the screenplay with Andrew Lanham (The Glass Castle), based on Stevenson’s book Just Mercy: A Story of Justice and Redemption. Published in 2014 by Spiegel & Grau, the book has spent more than 180 weeks on The New York Times Best Sellers List and counting. It was also named one of the year’s best books by a number of top publications, including TIME Magazine. For the book, Stevenson also won the Andrew Carnegie Medal for Excellence, an NAACP Image Award, and the Dayton Literary Peace Prize for Nonfiction.

In 1988, attorney Bryan Stevenson courageously chooses to go Alabama to fight injustice, armed with nothing but a Harvard Law degree and the resolve to help people whose lives were literally on the line. Earlier that year, Walter McMillian had been sentenced to death for a murder he didn’t commit and now believes his fate is sealed. Life had taken these two men on very divergent paths…but now those paths are about to converge in a racially charged, landmark case that will ultimately shake an unjust legal system to its core.

Michael B. Jordan, who portrays Bryan and is one of the film’s producers, says, “Throughout the course of the story, we see the ups and downs and trials and tribulations as Bryan fights to get Walter exonerated and freed from death row. You get to know Walter and see the humanity of the innocent man who’s been wrongly convicted, but you also see Bryan’s courage and passion, and understand why he has dedicated his life to this cause through his nonprofit organization, the Equal Justice Initiative.”

As seen in the film, EJI had a very modest naissance but has grown exponentially in the decades since. “They are the voice of people who can’t speak for themselves,” Jordan continues. “They stand up for those who are told to sit down, and they won’t quit until every option is exhausted or until justice is served. To achieve justice is Bryan’s only motivation.”

The film’s director and co-screenwriter, Destin Daniel Cretton, adds, “The film’s story starts more than 30 years ago, but Bryan is still fighting the same fight every day. He’s in it for the long haul. And he is probably the most kind, empathetic person I’ve ever met—a combination of a genius mind and a heart that is so big—and he’s somehow able to combine those two to create a strategy that is really effective in helping the people who need it. “Bryan’s lifework shows us that one person who sees a problem and decides to do something about it can make a difference,” Cretton goes on to state. “And the amount of change that he has accomplished in his lifetime is pretty unreal. So in the movie we’re watching the genesis of a hero. That’s what it feels like to me.”

Cretton reveals that reading the book Just Mercy forced him to question his own long-held trust in the legal system. “‘Justice for all’ are words that have been ingrained in my head since I was a child. But as you leaf through the pages of Bryan’s book, you see very clearly that there is not justice for all. There is justice for some and extreme injustice for many others.”

Cretton was initially given the book by producer Gil Netter, who had acquired the rights to Just Mercy before it was even published.

“I could not put it down. The stories are so moving and the people are so richly defined, it makes you feel deeply for them. I never felt so connected to characters who are living such drastically different lives from mine. And there is something about the way Bryan writes—not only writes, but the way he speaks, the way he lives his life—that is so inspiring. It makes you want to do something. What I know how to do is make movies, so I felt very privileged to take on the challenge of adapting his book into a film. I called Gil immediately and told him I would do anything to work on it.”

Netter recalls that the book had an equally powerful effect on him. “I was profoundly moved and felt that bringing Bryan’s memoir to the screen had the potential to open people’s eyes and hearts. My mission statement for my company has always been to make movies that show how putting good into the world can have a powerful and lasting impact. And certainly Bryan has brought hope to people who have been marginalized, not only by race but also by poverty. As Bryan says, ‘The opposite of poverty isn’t wealth, it’s justice.’”

Fellow producer Asher Goldstein agrees. “Frankly, the narrative of this story is something that has been going on for a long time in this country, and it strikes a resounding resemblance to things that are still happening. We felt it was an important story to tell because it’s extremely relevant.”

Jamie Foxx, who plays Walter McMillian, reflects, “There was a racial domino that was pushed a long time ago, and we’ve yet to put a stop to them falling. So a movie like this is needed because, hopefully, people will come—Black, white, Asian, Latino, whoever—and leave the theatre with a different mindset and say, ‘No, we don’t want to see that happen anymore.’”

“Movies have a remarkable way of uniting us with people who are different from us,” adds Brie Larson, who plays Bryan’s colleague Eva Ansley in the film. “So the idea that folks who maybe aren’t familiar with this issue, or who have a preconceived notion about the men and women on death row, could watch this film and have a new understanding of how our judicial system works, how it can fail us and how we can be of support is really important.”

Although Just Mercy became a widely acclaimed bestseller, Bryan Stevenson says he was nevertheless surprised when Hollywood came calling, admitting he was hesitant at first about turning it into a film “because I wanted to stay true to the book. But once I got to spend time with Gil, Destin, Michael B. and Asher, I became excited about the opportunity to make a movie that could reach a wider audience and have a greater impact.”

Stevenson continues, “I want people to understand the problems of bias and unfairness in our criminal justice system—a system that treats you better if you’re rich and guilty than if you’re poor and innocent. I sometimes think that people believe that there’s no room for mercy in justice or that mercy is disconnected from justice. I chose the title Just Mercy as a way of describing mercy that is rooted in an understanding that we all fall down, that we all need grace, that we all need redemption, that none of us want to be judged by the worst thing we’ve ever done. And I wanted to convey the concept that mercy isn’t what we give to the people whom we think deserve it; mercy is what we give to the people whom we think don’t deserve it. It requires an understanding of not just who they are, but who we are. So I like that interplay between ‘just’ and ‘mercy’ in the title, which is meant to push past the idea that it’s not only mercy, it’s mercy that is just. I wanted that idea to be front and center.”

The filmmakers all shared that objective and, to that end, worked closely with Stevenson throughout the development of the script.

Andrew Lanham, who co-wrote the screenplay with Cretton, confirms, “We spent a lot of time interviewing him and his staff at EJI. We went over pretty much every draft of the script extensively with him. The goal for everyone at all times was, ‘How can we stay true not only to Bryan’s voice but also to his message?’”

Lanham goes on to relate, “It’s impossible to interact with Bryan for more than five minutes and not be transformed in some way. No matter what your beliefs, there are some people who come into the world to be good souls and who can truly bring change. And when you meet one of those people, it’s incredibly powerful.”

“Bryan has been our North Star in all of this,” states Goldstein. “The fact is we could not have made this film without him guiding us to make sure the story we’re telling is reflective of his experience. Destin is someone who strives for authenticity, and the partnership he had with Bryan was invaluable in getting as close to the truth as possible, especially since the story is told through Bryan’s eyes.”

Having produced Cretton’s film The Glass Castle, Netter says he immediately thought of him to both write and direct “Just Mercy.” “I just knew Destin would be a perfect match for Bryan’s story. He is an exceptionally talented filmmaker, but most importantly, Destin has a deep level of emotional intelligence and genuine empathy for others. That’s why his work is always emotionally in touch and so truthful.”

“Destin is a man with seemingly endless understanding and humanity,” concurs Larson, who counts “Just Mercy” as her third film under Cretton’s direction, following “Short Term 12” and “The Glass Castle.”

“He stands for a lot of the same things that Bryan does, so it felt like a synergistic partnership. It’s one thing to make a movie about compassion; it’s another thing to live it and embody it and create a set that mirrors it. He is a tremendous support for every person, from the cast to his department heads and crew. They’re like family.”

Sharing that sentiment, Jordan says, “The positive energy Destin gave off and the tone he set is why our cast and crew was so close. It trickles down from the top and we all followed his leadership. It felt like magic because we had everyone coming together who really cared about this project and it created an environment to do something special. And as a producer, I felt the story had to be told by a person of color. Destin brings a certain honesty and real-life experience to his perspective.”

Just Mercy is the first film produced under Warner Bros.’ inclusion rider, ensuring that underrepresented groups, including women, people of color and those from the LGBTQ community are considered for key roles and positions on both sides of the camera.

The policy was spearheaded by Jordan, who offers, “When you have an opportunity to do something positive that could have a lasting impact, I personally feel it would be a waste not to maximize that opportunity. That’s what I’m trying to do with my body of work. I want to lead by example in the choices I make, not just talking it but walking it.”

Recalling the first time he saw Jordan and Stevenson together, Cretton believes Jordan is already living up to that aspiration. “We were in Alabama visiting EJI and went to the Legacy Museum and the National Memorial for Peace and Justice. Watching the two of them walking through those monuments that memorialize victims of lynching, listening to Bryan sharing his vision and Michael B. relating to it was such a moving moment. Seeing them side-by-side, I felt so happy about that casting, but I was also struck by the fact that this wasn’t just another role Michael B. was playing. I honestly think he was tapping into something in himself that went much deeper than this movie… I think we all were.”