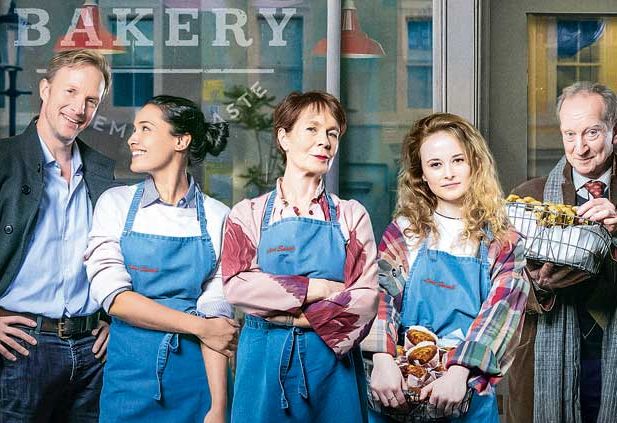 Love Sarah is a life-affirming and celebratory story about three generations of women brought together by fate and must save a dirty, dusty bakery bakery from shutting down in the cultural diverse Notting Hill.

“Love Sarah is a heartfelt inter-generational film which explores the theme of small family run businesses and the magic that happens when friends and family come together” said Benjamin Cowley, CEO of Gravel Road Distribution Group. “I’m sure that South African audiences are going to love this film that is filled with the perfect ingredients for excellent cinema viewing, not to mention plenty of delicious baking throughout” he added.

“I have always been wanting to make a film about three very different, very headstrong women and all the three leads have been inspired by women of my family or women I have come across over the years who I admire, says London based director Eliza Schroeder who was born in Germany, surrounded by a large family.

Coming from a large close knit creative family and three sisters with whom she has close connections, Schroeder believes that Love Sarah speaks volumes in terms of what she deeply desired to bring to the big screen.

Determined to fulfill her late mother’s dream of opening a bakery in charming Notting Hill, 19-year-old Clarissa (Shannon Tarbet) enlists the help of her mother’s best friend Isabella (Shelley Conn) and her eccentric estranged grandmother Mimi (Celia Imrie) in Love Sarah. These three generations of women will need to overcome grief, doubts and differences to honor the memory of their beloved Sarah while embarking on a journey to establish a London bakery filled with love, hope and colorful pastries from all over the world.

“I have just always been inspired by women and the power they can have together when they join forces. Coming from a close knit family myself I have always been extremely lucky to have such close bonds with my sisters and the women in my family in general. It has empowered me and I have learned a great deal from these women around me, particularly my beloved mum. I cherish this deeply and am carrying this in my heart so wanted to bring some of these feelings  / bonds onto the screen.”

It is a very personal film for Schroeder, who lost her own mother a few years ago, and wanted to treat death in a dignified way not making it dark and constraining but let it bring hope and life.

“The whole theme of loss suddenly became very important for me and I wanted to deal with it in a dignified way, inspiring audiences to see that there can be light at the end of the tunnel and that it’s sometimes wonderful to re-join forces with dear ones you might have fallen out with / not been in touch with for a while.”

The three generational film also appealed to her as she could bring forth different strengths, personalities and aspirations of women at different phases in their lives.

“I think as we grow older, we do become wiser and have a different view on life but sometimes we can also learn from the younger ones and they can often be wiser than we are. I wanted to show that joining forces and listening to each other, no matter the age, can sometimes help a great deal.”

Being an avid baker and having grown up in Germany with a mixed Jewish-German family, married to a French man and living in post Brexit London gave Schroeder the inspiration to portray a culturally diverse London in its glory brought together by the country’s love for baking quite rightly symbolised by The Great British Bakeoff.

“Notting Hill which has been my home for 11 years became the backdrop of the film as I have always been inspired by this neighbourhood, where people from all walks of life live together next to each another.”

“The idea of the bakery was always Eliza’s vision – she loves her local community in Notting Hill and the cafe culture of the lifestyle there. People have really affinities to their local coffee shops/bakeries,” says screenwriter Jake Brunger, who grew up in Nottingham and is a graduate of the Royal Court Theatre Supergroup and was selected as part of the Old Vic Theater New Voices, work closely with Eliza Schroeder during the making of the film.

“We had regular meetings and catch ups about the script, although this was in a pre-Covid world before Zooms so I used to trek halfway across London to see her every few weeks! This film had always been Eliza’s passion project – she came up with the story-line and characters herself – so it was very important to me to serve her vision.”

Brunger got onboard as screenwriter when producer Rajita Shah saw a play he’d written that dealt with some similar themes to Love Sarah.

“I’d never even vaguely dipped my toe in the screen world before, so was very excited to get started!” says Brunger, who was selected for the 2016/17 BBC TV Drama Writers’ Programme and was named as one of the upcoming writers-to-watch on the BBC’s 2017 New Talent Hotlist.

“I come from a theatre background (predominantly musical theatre, where I also write lyrics) and Love Sarah is my first film, so even in practical terms I had to adapt to a new way of formatting the script. Screenwriters use a program called Final Draft, so getting used to that took a while, but once you’ve got the hang of it it’s pretty easy to navigate. As for writing the screenplay itself, it’s just something that you have to work out the best method for you – it’s a bit like learning to ride a bike, you fall off but get back on again!”

“Theatre is very much where I come from, but I’m absolutely loving writing films at the moment, mainly because films are such a huge part of people’s lives. When you’ve had a bad or tiring day at work and just want to kick back with something easy and entertaining; those are the kind of films I want to write. But I love writing musicals, and hope to always switch between the two. Or – touch wood – write a movie musical!”

Brunger wrote the screenplay because he also wanted to explore the effect of grief on those most closely affected by it: in this case a mother, daughter, best friend and former lover.

“My longing to explore so-called ‘grief stories’ on screen comes from a very personal place for me after 2 of my family members passed on. When people die with regrets and unsettled scores – things they wish they’d said but left too late – there is never a chance to rectify those wrongs and I wanted to write a film where that regret was explored centre stage, as well as being the spur to change your life and truly make something of yourself.”

“I’m very interested in grief and the way we behave after a bereavement – it makes us reevaluate our lives and who we are, and makes some of us do wild, new things and change the course of our life. We all suffer bereavement at some point in our lives so in that way I hope the film is very universal, and also quite inspiring too. “

The multi-generational aspect of Loving Sarah also appealed to Brunger.

“I think that comes from being a child and sitting down to watch films with not just my parents but my grandparents too. Life is multi-generational; we come across people of all ages all the time, so film should definitely reflect that. I was also very keen for there to be a positive storyline about romance between the two elder characters – after all, people in their 60s date too!”

He does not regard himself as a baker.

I’m not a baker unfortunately, although I can make a cake if pushed! I recently made Nigella Lawson’s Guinness cake, which is absolutely delicious – I can thoroughly recommend it, and it’s very easy too! The idea of the bakery was always Eliza’s vision – she loves her local community in Notting Hill and the cafe culture of the lifestyle there. People have really affinities to their local coffee shops/bakeries. I often write in coffee shops and seeing the various characters who pop in and out – people are just endlessly fascinating.