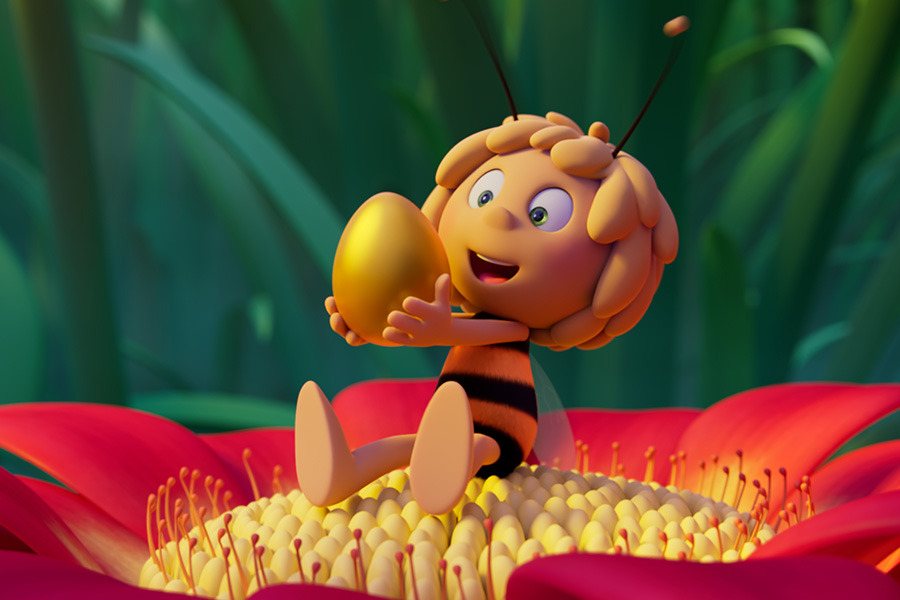 Maya the Bee is a classic character; now over 100 years old, her adventures take place in nature and convey positive stories full of hope, friendship and tolerance.

On her first journey to film, Maya the Bee – First Flight was all about discovery, growth and finding her place in the world; Maya the Bee – The Honey Games touched on trust, teamwork and persistence. Her latest adventure is Maya the Bee – The Golden Orb some new themes are in focus that still allow Maya and her character to shine.

After the immense success of the first two theatrical features and the very accomplished collaboration with Studio B Animation in Australia, the whole team was convinced to get together again for the third installment of this beloved franchise. With millions of visitors worldwide to date, the creative teams in Australia and Germany put their heads together and created a new adventure for Maya – as always centered on Maya’s core values of friendship and helping others.

Her new adventure is a classic road movie where Maya, and her best friend, Willy, leave Poppy Meadow. Going on another adventure is strictly forbidden by the Queen, so by disobeying her, Maya needs to be sure that this is an important task: delivering the Orb to Greenleaf is that mission. Being Maya she cannot resist helping another bug in trouble, and when the truth behind the Orb is discovered, it all falls into place.

Maya the Bee is based on a German children’s novel, which was published in 1912, and successfully translated into many languages, enjoyed by children all over the world.

The sharing of this iconic German story is rather unique. The book was followed by the international success of the TV series “Maya the Bee” from 1975 – and with the new edition of “Maya the Bee” in 3D CGI, the popular bee returned to TV screens in 2013 with a new look and feel – in 2014 the first feature film celebrated its cinema premiere and has to date been sold in over 170 countries.

The first Maya movie, Maya the Bee – First Flight, was not only a great economic success; it proved that the continuation and further development of Maya, has been successful. Thus, the strategy has been accomplished to produce Maya not only for an existing audience but also for a new one. That is also realized in the fact that Maya the Bee is now travelling to places she had never visited before and captivating audiences around the world.

In 2018 the second animated feature film Maya the Bee – The Honey Games followed: Maya the Bee’s second cinema adventure is the most successful German animated film after international box office in 2018. And, with a new second season of the TV series released and the third theatrical feature Maya the Bee – The Golden Orb right here – the success story can continue.

Maya’s emotional journeys are embedded in a world of comedy, fun and high energy excitement

To tell this new adventure of Maya and for making the third film, it was vital to develop a narrative which continues Maya’s journey of self-discovery with a reflection of the themes and challenges children will experience in their own lives and interactions, and to witness scenes of Maya overcoming her adversities in a positive, intelligent way.

Maya the Bee – First Flight explored concepts of prejudice between the bees and the hornets playing out as Maya discovered her personal identity and her role in the meadow. In Maya the Bee – The Honey Games she ventures beyond the meadow, to a new hive, where her positive and optimistic views of the world are challenged by some bullies and a rival that bends the rules to serve her own needs; a world view she has never encountered before. Her third venture, Maya the Bee – The Golden Orb is a journey of self-discovery Maya’s world expands even further, pulling the rug of familiarity from under her feet as she journeys to a completely new land, with only her faithful best friend Willy, and the enormously popular Arnie and Barney at her side.

In keeping with the tone of the Maya franchise, these emotional journeys are embedded in a world of comedy, fun and high energy excitement, with many physical gags courtesy of the ants, but also from the supporting characters arcs through the film. So, yes, – there is still a lot to tell about Maya the Bee!

Screenwriter Fin Edquist, who crafted Maya the Bee, its sequel The Honey Games, and the latest installment, The Golden Orb, has worked as a director of commercials and directed a number of award winning short films and music videos. He wrote and directed the psychological thriller Bad Girl and wrote several animated features including 100% Wolf, and Blinky Bill. He is also the co-creator of the hit TV series The Secret Daughter and has script-produced both live action and animated TV series, including Wolf TV, Rescue: Special Ops and Tashi.

Director Noel Cleary is a director, story artist and character animator with extensive experience in film and TV series work. He is very passionate about all aspects of his profession and strives to produce emotive, compelling stories and characters. Amongst other projects he was Co-Director for Blinky Bill – The Movie and Episodic Director for TV series Tashi for 26 of the series’ episodes.

Before Cleary worked as character animator and story artist for The Legend of the Guardians for Animal Logic and in story on BBC’s Walking with Dinosaurs and on the short film The Polar Bears. He spent many years working for Walt Disney Studios in Sydney as supervising animator on 12 films and several TV series. He directed Maya the Bee – The Honey Games (2018).

Co director Alexs Stadermann is an accomplished feature film and television Director. He spent many years working for Walt Disney Studios in Sydney. During his years at Disney, Alexs was the Unit Director for Bambi II and Tarzan II, Award winning Supervising Animator on Lion King 1½ and Senior Character Animator /SFX Supervisor on many other Disney titles.

Following his years at Disney, Stadermann directed two seasons of the animated comedy show Planet Sketch for Aardman Animations (known for Wallace and Gromit). He later joined Zack Snyder on Legend of the Guardians as Head of Story, part of the director’s unit at Animal Logic. Alexs then moved to Flying Bark Productions to direct The Woodlies,. Following this, he was the ideal choice to direct Maya the Bee Movie, Flying Bark’s first ever 3D animated feature film.

Since wrapping production on Maya, Alexs has taken on the role of Creative Director for Flying Bark, overseeing development on all feature film, television and digital media projects. Alexs was also the Co-Director on the animated feature film The Blinky Bill Movie and Maya the Bee – The Honey Games. He directed on Flying Bark’s latest production, 100% Wolf.

Studio 100 Media is an international production and distribution company within the children’s and family entertainment sector. Based in Munich, Germany, the company is a 100 percent subsidiary of Belgian firm Studio 100 NV and was founded in 2007.

Studio 100 Media owns an extensive library of established children’s classics. Amongst the well-known brands of Studio 100 Media are Maya the Bee, Heidi, Vic the Viking, Nils Holgersson and Blinky Bill. The company develops and acquires new content, engages in co-production and co-financing activities and is also responsible for the international distribution of its own and third party rights.

As a producer of animated children’s feature films Studio 100 Media’s first project was the 3-D Australian-German co-production Maya the Bee – The Movie in 2014. Currently in production or pre-production are Princess Emmy – The Movie and Vic the Viking – The Movie.

With the incorporation of Studio 100 Film, a subsidiary of Studio 100 Media, the company has expanded its business areas to the worldwide distribution of feature films – Studio 100’s own productions as well as selected third party films. An own animation studio was founded in 2018: Studio Isar Animation.

The CGI animation studio with workstations for up to 40 artists, Studio Isar Animation is responsible for CGI work such as modelling, texturing, shading, lighting, FX, compositing and rendering for Studio 100 Media’s film productions. As a first project, Studio Isar Animation took over the CGI works for the Maya the Bee – The Golden Orb.

Studio 100 Media’s business model is the perfect vertical and horizontal integration of its IP’s. In marketing its license rights the company pursues a global strategy within sectors ranging from Content Distribution, Licensing and Home Entertainment through to Theatrical Movies, Stage Shows and Theme Parks.

Studio B Animation is a production company set up to specialize in family
entertainment. Studio B projects have a strong emphasis on using CGI animation to tell family-oriented stories, by procuring well-known titles that resonate with young audiences and iconic characters that children know well.

The founder of Studio B Animation, Brian Rosen, has a long track record in family films beginning 1980 with the well-known comic strip character Fatty Finn. He also produced the much loved classics FernGully: The Last Rainforest in 1992 and James and the Giant Peach in 1996. Maya
the Bee – The Honey Games was Studio B Animation’s first feature film, followed by Maya the Bee – The Golden Orb and currently in production is Mia and me – The Hero of Centopia.

Operating as a full-service production facility for independent feature films and series as well as providing animation services for global clients.

Recently Flying Bark has produced some of Australia’s well-performing original family films and series, including Maya the Bee Movies and the Blinky Bill CGI adaptations as well as animating on the hit-series Rise of Teenage Mutant Ninja Turtles for Nickelodeon.

Flying Bark has recently delivered Indie-Australian film, 100% Wolf – adapted from Jane Lyon’s book with the same name – and the spin-off series is a co-production with Australian broadcaster, ABC, and Germany’s SUPER RTL.

Flying Bark is part of the well renowned, Belgian owned Studio 100 Group, which is one of the largest independent family entertainment companies in Europe. As a global group, the company enjoys great success with its international distribution of television and feature films, licensing and merchandising campaigns and theme parks across Europe.