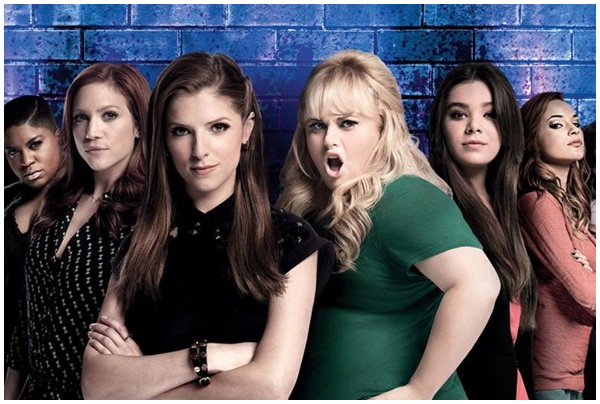 “With this series, we feel like we tapped into something—this flood of female empowerment, not just in Hollywood and in our industry, and in movies, but in the world.”

The astonishing blockbuster success of the first two films in the Pitch Perfect series naturally prompted discussions about getting a third installment underway.  Now graduated from college and out in the real world where it takes more than a cappella to get by, the Bellas return in Pitch Perfect 3, the next chapter in the beloved series that has taken in more than $400 million at the global box office.

The film is directed by Trish Sie (Step Up All In) from a screenplay by Kay Cannon and Mike White—with a story by Cannon, Based on the book by Mickey Rapkin.

After the highs of winning the World Championships, the Bellas find themselves split apart and discovering there aren’t job prospects for making music with your mouth.  But when they get the chance to reunite for an overseas USO tour, this group of awesome nerds will come together to make some music, and some questionable decisions, one last time.

Franchise producers Paul Brooks of Gold Circle and Max Handelman and Elizabeth Banks of Brownstone Productions were certain there was another story, but they were just as sure that they would be patient and get it just right

“We worked hard to put together an organic story on the second film, and we wanted to take our time and figure out what felt like an authentic next step for the Bellas.

Kay Cannon (Screenplay by/Story by) is a screenwriter, producer and comedienne.  She recently made her motion picture directing debut with the upcoming comedy Blockers, starring Leslie Mann, John Cena and Ike Barinholtz.  Cannon received rave reviews for her debut screenplay Pitch Perfect, and she wrote and co-produced the hit follow-up Pitch Perfect 2. Cannon recently served as the executive producer, creator and showrunner of the Netflix series Girlboss, based on Sophia Amoruso’s best-selling autobiography, which starred Britt Robertson.  Cannon worked her way up from staff writer to supervising producer on 30 Rock.  She’s a three-time Primetime Emmy-nominated writer, twice for Outstanding Comedy Series and once for Outstanding Writing for a Comedy Series.  She has also won three Writers Guild of America Awards as well as a Peabody, all for her work on 30 Rock. Cannon also served as a co-executive producer on New Girl, a consulting producer on Cristela and co-produced the hit feature Baby Mama.

Mike White (Screenplay by) is an award-winning writer, director, actor and producer.  His writing credits range from the indie black comedies Chuck & Buck, The Good Girl, Year of the Dog and the recently released Beatriz at Dinner, to the mainstream comedy hits School of Rock, Orange County and Nacho Libre.  His television credits include the short-lived but beloved Freaks and Geeks and Pasadena. Along with appearing in many of his films, White is known for twice competing in the Primetime Emmy Award-winning The Amazing Race with his father, Mel.

Mickey Rapkin (Based on the Book by) is a screenwriter and journalist whose first book, “Pitch Perfect,” about the competitive world of collegiate a cappella groups, was published by Gotham Books in 2008 and inspired the film franchise of the same name, which starred Oscar® nominee Anna Kendrick and Rebel Wilson.  Rapkin’s second book, “Theater Geek,” was published by Free Press in 2010 and is in development with Universal Pictures. In 2013, Rapkin partnered with Zooey Deschanel’s production company, Miss Hawkins, and 20th Century Fox to sell a sitcom pilot to Fox called Freelancers.  Rapkin’s debut children’s book, “It’s Not a Bed, It’s a Time Machine,” will be published in 2018 by Imprint, a division of Macmillan.  Rapkin’s writing has appeared in The New York Times, National Geographic Traveler, Bloomberg Businessweek and The Wall Street Journal.

That took a long time, but we got it here,” explains Brooks.  “The Bellas are all out of college, trying to figure out what they want to do long term, and like a lot of folks in their mid-twenties…it’s crisis time.”

For Banks, this chapter represented a full-circle moment.  She and her fellow producers had developed the series from its inception, and Banks stepped behind the camera to direct the juggernaut Pitch Perfect 2.  As well, she has performed as the a cappella-obsessed Gail, who alongside commentator John, cannot leave the Bellas alone.  It was important for the filmmaker to have the series evolve in a new direction.  “This movie not only has more singing and more dancing than the previous two features, but it is a full-fledged action-adventure,” states Banks.  “We were excited about the idea of literally making the Bellas action heroes, especially Fat Amy.”

“Pitch Perfect 3 introduces the Bellas to the big bad world around them,” adds Handelman.  “We raised the bar and wanted fans to get what they love: the singing, dancing and laughter, but also to see the women involved in new, fun and exciting situations.  This is a much more action-driven movie; the cold open announces right away that things are very different.  The characters are older, and they’re all on different journeys.  You will not be disappointed.”

At the helm of Pitch Perfect 3 is director Trish Sie, known for her critically acclaimed choreography in the Grammy Award-nominated OK Go music videos and the explosive Step Up All In.  Beyond excited to join the team, Sie reveals: “I’ve been a big fan of Pitch Perfect movies ever since I saw the first one in theaters.  It was one of those movies that filled me with a certain amount of existential rage, because I wished I had been a part of that film…and figured I never would get that chance.”

With a background in music, dance and choreography, Trish Sie (Directed by) brings a fresh, inventive, energetic approach to filmmaking.  Her passion for playfulness and innovation characterizes her acclaimed signature style.  Known for not taking anything too seriously, she brings humor and a whimsical approach to storytelling, characters, movement, timing, music and space. After a decade as a professional dancer, championship ballroom competitor and choreographer, Sie dove into filmmaking in 2006, when she created, directed and produced her first official music video, “Here It Goes Again,” with her brother’s band, OK Go.

Success as a music video director led to commercial work for Sie.  She’s shot ads for brands such as Levi’s, Häagen-Dazs, Sony, Old Navy, Dole, Carl’s Jr., Hunt’s, Big Lots! and more. Her work has been honored and awarded by Smithsonian magazine, Creativity magazine, the Cannes advertising festival and Saatchi & Saatchi’s New Directors’ Showcase, among others. She also writes and creates her own short films and concept videos.

Her first feature film, Step Up All In, was filmed in native 3D and hit theaters around the globe in 2014, grossing more than $90 million worldwide.  According to the Los Angeles Times, “Sie packs in her exuberantly choreographed and staged dance scenes as tightly as beads on a necklace,” and The New York Times says her film “exudes the infectiousness of an old-fashioned movie musical.”

As a fellow University of Pennsylvania alum, Sie hit it off with Banks and Handelman off upon first meeting.  “When I heard that Pitch Perfect 3 was searching for a director, it was one of those too-good-to-be-true moments,” she shares.  “I didn’t know them during college, but Liz, Max and I went to school at the same time.  I was hoping that we’d have something in common, and we did.  It felt like a good fit.”

“Trish’s background started with OK Go, who has had some of the more spectacular music videos of the last several years,” commends Banks.  “She comes from a choreography background and brings that energy you need to find in a Pitch Perfect movie.  She equally gets our ridiculous sense of humor.  So after meeting a number of times, it felt like Trish was the perfect choice.  Away we went.”

It was just as important that Sie connect with the core cast.  Academy Award®– and Tony Award-nominated performer Anna Kendrick has been the heart of the Pitch Perfect series since the beginning, and fans have followed Beca’s journey from awkward freshman to performer on the cusp of a brilliant musical career.  Kendrick reveals that she was thrilled to have Sie as a partner on this chapter in the series: “We’re obsessed with Trish; she’s an amazing collaborator who listens and wants to hear our opinions.  “She’s also musical and comes from a choreography background.  You just trust that she would shoot it right.”

The actress also appreciated the teamwork that went into bringing life to the story first crafted by Kay Cannon, who wrote the first two films and who shares screenplay credit with Mike White on Pitch Perfect 3.  “The humor has always been what made our movies stand out, and we’ve all worked together to bring out the best version of this script,” says Kendrick.

Fat Amy herself, Rebel Wilson, who has seen the character that she created take on an iconic life of her own, appreciates what all that her director gave to the set.  “Trish brought such a great, fun vibe on- and off-set.  I just love her energy.  She’s so girl power, positive and motivating, and we’ve just had the best time working with her.”

One of the proudest moments of her astonishing career, Banks gives all her love to this chapter.  “We’re thrilled to have a female director and an all-female cast, and to be promoting interesting and fun stories for women,” she provides.  “There aren’t enough movies that do that.  We love the message to young girls about the teamwork involved, about friendship, and what they can aspire to in their own lives.  Trish brought an infectious energy to every meeting, as well as a passion and a resume that was right.  We felt like we found a great person to be in charge of our film, and she just happens to be a woman.  That is icing on the cake.”

Handelman reflects on why this series speaks to so many: “Pitch Perfect works in many ways, but it works best when it’s the perfect intersection of absurdity meets awesomeness.  What is always funny in this world is how self-serious all these people are.  But audiences realize they’re incredibly talented, and that they believe in themselves.  These characters come together to create a sound that is impressive, and very satisfying, even if how they get there is often ridiculous, and absurd.”

Sie appreciates that these characters have found a way to walk the line between absurd, larger-than-life eccentric kookiness and a fundamental grounded realness.  “It’s easy to be wacky and over-the-top, and to stick to things that feel familiar.  What’s hard to do is to balance those two.  Pitch Perfect has that ring of truth that you can apply it to your own life.  These women go through what we all do—whether it’s being a misfit, being in a group of friends figuring out your way after college.”

“Audiences will love the action because I worked hard to get it awesome,” deadpans Wilson.  “So I hope they love it and I hope it’s surprising because it is a slightly different tone in this movie because we didn’t want to just do the same thing.  We wanted to go the next level for the fans.  I hope they like finding more out about Fat Amy.  I also just love the songs in this movie.  We’re constantly singing them…even when we’re not supposed to.”

This chapter wrapped, we conclude with a reflection from the producer who helped start it all.  “With this series, we feel like we tapped into something—this flood of female empowerment, not just in Hollywood and in our industry, and in movies, but in the world,” says Banks.  If that power comes with entertainment for the audience, so much more the better.  She ends: “Plus, singing and dancing and making people laugh is never a bad combination.”