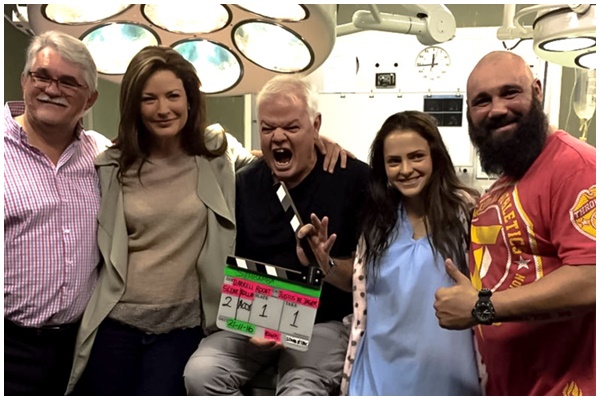 Siembamba Is An Extension Of The Myth. A Modern Nightmare, Founded In The Original Tragedy.

Returning to her hometown, Eden Rock, and overwhelmed by the birth of her first child, Chloe van Heerden (19) tries to come to terms with motherhood. Despite the support from her mother, Ruby (35), Chloe struggles with the demand of being a new mom.The incessant crying of her baby, the growing sense of guilt and paranoia sends Chloe into a dark depression. With a heightened urge to protect her son, Chloe sees danger in every situation.

Distraught she pays a visit to family psychologist Dr. Timothy Reed (40s) who diagnoses her intrusive thoughts and feelings of anxiousness to a case of baby blues.Yet the thoughts grow worse and more violent. Chloe starts to hear voices and the humming of a childhood lullaby and sees flashes of a strange entity around her child.

Convinced that the entity is real, Chloe does everything in her power to protect her son. Her decline reaches fever pitch, and everybody seems to be moving against her. Desperate, Chloe finds solace in the arms of her childhood friend, Adam Hess (20s).

The world around Chloe implodes and it becomes clear that she and her child are in imminent danger. But from what? Is Chloe haunted by evil or is it just the baby blues?

Tell us about Siembamba? What is it all about?

Siembamba is a South African psychological thriller. Siembamba plays on old South African folklore, as experienced by a girl coming to terms with motherhood and her relationship with her own mother, while undergoing serious post-partum psychosis – or is it something else?

How does the film relate to the Siembamba folklore?

It is an extension of the myth. A modern nightmare, founded in the original tragedy.

What attracted you to producing the film?

Horror in South Africa is an untapped market and we wanted to produce for the international market. Siembamba is distributed by Monte Cristo International and already sold to the USA; Japan and Canada.

Tell us about Darrel Roodt directing?

Darrell is a phenomenal director. He gets into the feel of the movie and make it a reality! We have worked with Darrell on 4 other movies, but believe this is his best work to date!

Tell us about your cast?

We are blessed with a very talented cast. The leading lady, Reine Swart plays the role of Chloe van Heerden. Reine did a lot of research on Post-Partum Psychosis and plays the role brilliantly. Thandi Puren, in the role of Ruby van Heerden, is an actress to take note off. Deanre Reiners, as Adam Hess, is the boy next door and fulfil the role to its’ maximum.

Judging by the trailer, the film looks terrifying. Is it really that scary?

The trailer is scary yes… but the movie has a lot more to it.

What do you hope the audiences will get from watching Siembamba?

A good fright that stays with them for a few weeks, but more an understanding of Post-Partum Psychosis and a few new actors to follow.

Go watch the movie… you won’t regret it!