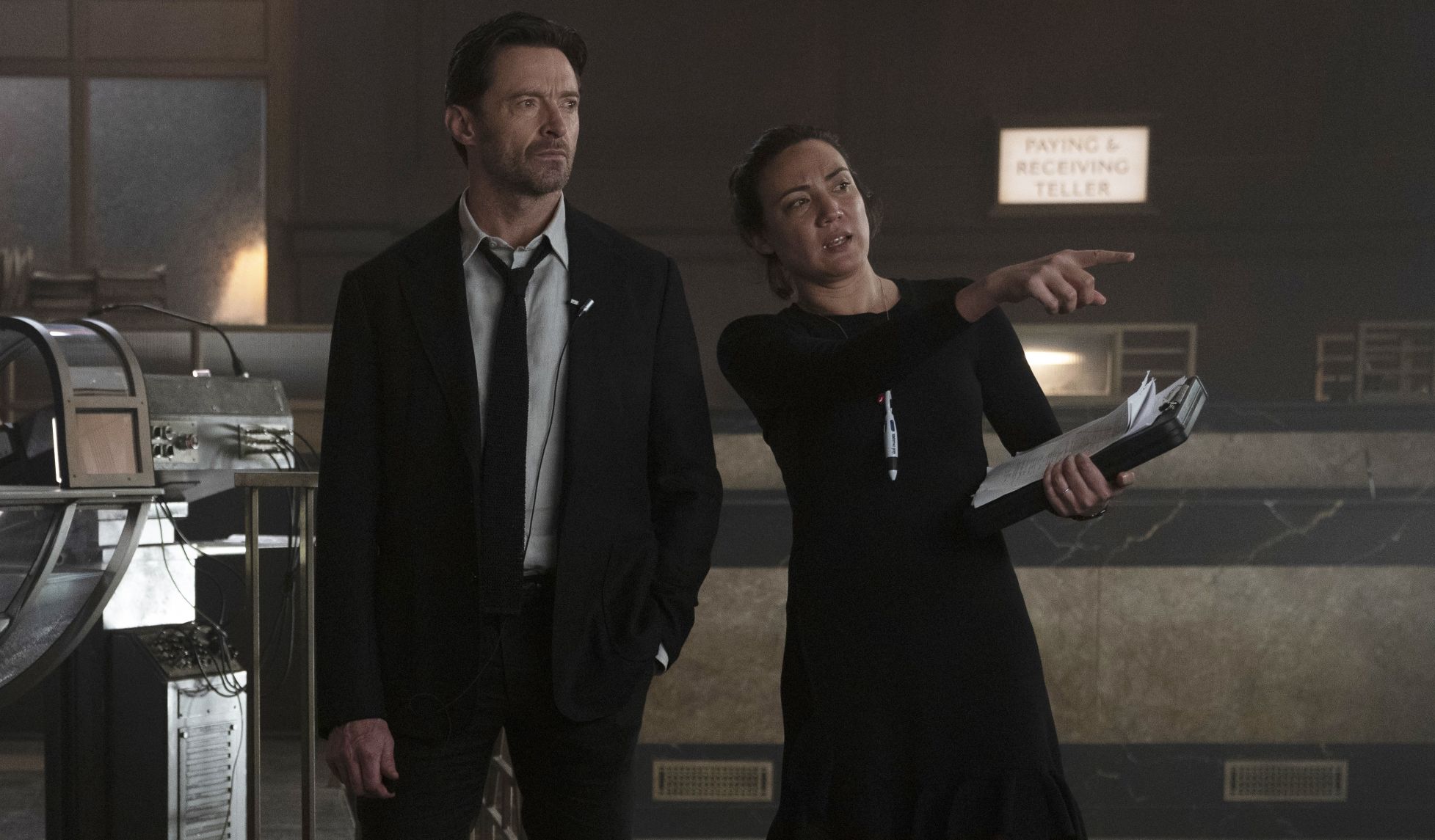 When writer-director Lisa Joy wrote the screenplay for Reminiscence, her writing process involved falling in love with her characters. “Whether they’re villains or heroes, and it doesn’t matter what sex they are or how big they are or how flawed they are, there’s always a little piece of me in them. I think that’s the only way you can write truthfully and see something beyond those lines of expectation. Everybody has a soul, and everybody contemplates similar issues… they just do it in different ways.”

Highly regarded for her genre work across television and film, Lisa Joy she is the co-creator, co-showrunner, executive producer and episodic director of HBO’s Westworld.

The filmmaker took a page from her own book when contacting her hoped-for leading man, and “cold-called” with an email, saying a little about herself and Westworld. Also, that Reminiscence was her first feature.

Hugh Jackman remembers the meeting vividly: Joy showed him all of the artwork that had already been designed and walked him through it.

“He understood the most important thing, which to me speaks to his lack of vanity as an actor—he’s someone willing to do whatever it takes to convey certain aspects of his character. What I told him was, ‘You think you’re the hero of this and, in some ways, you are, but not always and not fully. It’s not a simple tale. You don’t get to just be a superhero.’ And I left him the script.”

“What attracted me beyond working with Lisa, I think, was a movie that felt so original. I think audiences more and more are going to the movies to see something they haven’t seen before. To be immersed in a world that they don’t know. They want to go on a journey that they don’t expect, and this is what you get with this. So, the world of the film really was exciting, but I think it was the originality and the fact that I had no idea where the story was going. And just when I thought I’d worked it out, I would get a massive surprise. The story would zig and then it would zag and had one of the best endings I’ve read in a script for a long time.”

“When I met with Lisa, she had shown me some of the visuals and I understood what the movie was about in general, but I hadn’t seen the script,” says Jackman. “And I was already excited about it. I was excited about the world of the film. I was excited about the character and really excited about her as a writer-director. I think she’s incredibly talented, but when I met her in person, she just gave off an air of confidence and surety, not only about the material, but how she was going to tackle it. Her passion for it. It’s a rare thing for me to just have that instant sort of gut feeling that ‘I’ve got to do this’ and, to be honest, I felt that 20 pages in when I later got the script.”

Jackman welcomed the dive into troubled, sometimes dark, character waters and says, “He’s a solitary guy; a veteran, and he’s scarred. He has a lot of darkness to him. That’s probably why he’s so isolated, because he’s learned to cope that way. And with the reminiscence machine, you’re dealing with memory and the mind. My character is the person who takes you there to that memory, so that you don’t go down the wrong path or veer into the places you don’t want to go. The mind, the brain, is a very confusing and potentially dangerous place, so my character leads you to where you need to go in a safe way and will bring you back.”

His role as safe guide, per Joy, is perhaps owing to his experience of reminiscence both as a tool of war and of peace, how he’s haunted by the fact that someone can just vanish, be erased from this world.

It was the duality, comparing what was to what is, that not only drew Jackman to the film, but provided him with a larger context in which to see “Reminiscence” and its core theme. Jackman closes, “So every character in this movie, in particular my character, has a choice to make—on whether they move forward and look forward, or whether they live in the past, hold onto memories and live in that memory. And now, we live in a world where you can literally live in memory. I think that’s a really powerful way for everyone in the audience to look at themselves and the way they’re living life. I think that is where movies and art is at its best. When a story can take us to places we didn’t expect to go, get involved with characters, make us laugh, make us cry, take us away…but, at the same time, just open our hearts to what’s happening in our own lives.”

All during her first pregnancy, Lisa Joy was never far from her laptop. The coinciding watershed moments of profound loss and new life stoked the creative sparks that compelled her to explore the overriding theme of memory within a wholly-created and genre-bending world.

The filmmaker says, “Some of the most incredible moments of our lives are locked in our heads; they’re the stories that we revisit again and again, that make our life worth living. Sometimes, those stories aren’t shared by anyone else and so when you go, they go. In the end, I think we all become stories. We coalesce into a couple sentences over generations, and I’ve always thought, ‘Try to make it so your sentences are good, that you add more joy into this world than you took from it.’”

“For all of the cinematic acumen and filmic references present in Joy’s work, it is perhaps surprising that she did not grow up steeped in the art of the cinema. Her real instruction in and appreciation for the classics began when she was in college, working as an au pair her senior year to “finance working for literary magazines in New York.”

When her young charge had been tucked in for the night and his parents had gone out, Joy would hole up in bed and watch old films.

“Film noir really spoke to me, the same way that mythology spoke to me. They are both about complex people in a world that can be dark, cruel, lawless. There are no clear-cut heroes, no clear-cut victims. The complexity of those characters navigating that world, that’s what I was drawn to. In writing ‘Reminiscence,’ I wanted to delve even deeper into that complexity, twisting around traditional notions of noir… starting with the term ‘noir’ itself. We’re used to those kinds of films being very dark and for me, I wanted it to be flooded with light and natural beauty, because sometimes the darkest things hide in the most beautiful surroundings.”

Producer Jonathan Nolan—co-founder with Joy of Kilter Films—remembers his first reaction to the script: “I read it and I was completely astonished. She had referenced some of my favorite movies, film noir and the classic, richer movies, when you could really play with questions of character, fate, memory… She’d taken all of those ideas and turned them on their head, inside out. Blown them to pieces and reassembled them in this breathtaking way. She sold the script. Then, after a couple of years of gentle prodding from her friends and me that the best director for the project would be her, with her usual incredible precision and dedication, she set about bringing it to life.”

Producer Michael De Luca relates, “To be a participant in this arc that Lisa Joy has experienced has been immensely gratifying. She was really exploding when the industry began to experience ‘Westworld,’ and then to have this screenplay actually begun just before all of that. ‘Reminiscence’ is a heady piece that includes the same thoughtful discussions that are present throughout ‘Westworld’ and, like that, it plays in and around so many genres—action, thriller, mystery, romance. Lisa balances her storytelling with really resonant themes, but they never get in the way of the popcorn enjoyment of her explosive way with narrative.”

Long-term collaborator, friend and producer Aaron Ryder recalls, “Everyone responded to the script’s intelligence. As it was making its way around, Lisa would come and talk with me about where things stood. Then, at one point, she just decided, ‘What am I waiting for? I should do this.’ There were other opportunities that had been presented to her, other things she could have directed. But it was her passionate, unshakeable determination to tell this specific story, that it needed to be told at this moment. Every movie’s got a moment. I’m just happy to have been a part of this coming together.”

Rebecca Ferguson likewise responded to Joy and her way with words, both spoken and on the page. Ferguson says, “Lisa’s way of writing—there’s a poetry, a musicality without sounding ridiculous. It makes me, as an actor, want to be absolutely truthful to each and every word. I think, other than the writing, the first thing I fell in love with was that Mae was portrayed in many different ways. She’s portrayed through others’ ideas of her. Her existence is defined by each person who thinks they see her. Talking to Lisa, it became, who is Mae? What is her true identity? When does she let things slip through the cracks? I’d never done something like this before. I eventually created a timeline of Mae, and it became about starting in the middle and working her out, both to the end and to the beginning. It was incredible.”

For the part of Watts—Nick Bannister’s aide-de-camp, support and colleague in one package—Joy turned to the “inimitable” Thandiwe Newton. Newton reveals, “When ‘Reminiscence’ came along, it took me a week just to wake up to the fact that Lisa wanted me to be a part of her first feature. I don’t think it’s an obvious choice to have me in the role, but that’s where magic kind of happens—when you’re entrusted to do something bold, something different, to use my skills as an actor to transform. Lisa saw me as Maeve in ‘Westworld,’ and had a very strong sense that I could create that character, which has been one of the best things that’s ever happened to me personally or professionally. With Watts, I got to explore and play a personality that I don’t think I would’ve necessarily gotten the opportunity to do.”

I’ve lived a long time with Reminiscence as a dream of mine. And no director ever knows how a film will be received; whether it will resonate with people in the way they’d hoped. But I do know that, just like philosophically and temporally there is no one “point” to a life, there is also no one “point” to a film. No resolution where one can be fully satisfied. Or feel fully “done.” There are only the Seurat dots of the whole experience. And what that experience meant to you. To that end, working with my incredible cast and crew on “Reminiscence” has been one of the most fulfilling and inspiring experiences of my life. Every day on set, I was grateful to be on that creative journey with them. It’s the kind of memory I will happily reminisce over for all the days to come.