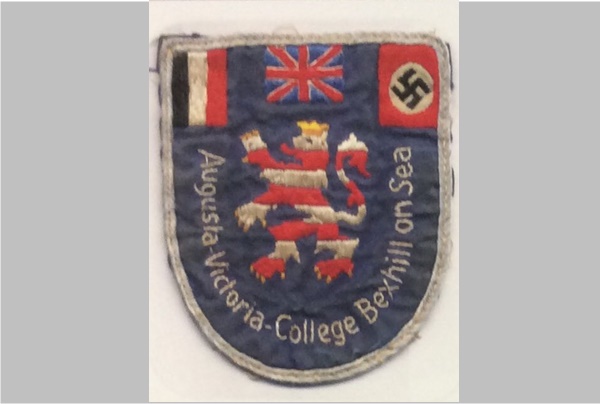 The period thriller Six Minutes To Midnight is inspired by the real Augusta Victoria College for girls on the south coast-of England that taught German girls throughout the 1930s and only closed at the outbreak of WW2. The school was run on Nazi ideals throughout Hitler’s governance as demonstrated by the school badge, a Swastika on one side and a Union Jack on the other.

Summer 1939, Hitler’s power is growing and tensions between the UK and Germany are at boiling point. The Augusta Victoria College, a finishing school for daughters and goddaughters of the Nazi elite on the south-coast of England, is under close scrutiny after the mysterious disappearance of their teacher Mr Wheatley. The school governess, Miss Rocholl (Judi Dench), hires journeyman teacher Thomas Miller (Eddie Izzard) to replace Wheatley and help prepare the girls for the Anglo-German fellowship. Thomas slowly raises the suspicions of Ilse Keller (Carla Juri), the girls’ German tutor, who has secrets of her own. Caught in the crossfires, Thomas is framed for murder and goes on the run to clear his name and uncover Ilse’s true plan for the girls. Can he stop her before its too late?

One of the most celebrated comics of his generation, Eddie Izzard has also developed an equally stellar reputation as a film, television, and stage actor and political activist.

When Izzard visited the museum in Bexhill on Sea, where Izzard’s family is from and where he spent a lot of time as a child, the curator of the museum showed Eddie the school badge from the real Augusta-Victoria College for girls, which ignited the idea for the film Six Minutes To Midnight.

The arresting and disconcerting image of a Swastika in the right hand corner and a union jack in the left hand corner piqued Eddie’s curiosity.

Through conversations with local historians and the museum he discovered the school was a finishing school for daughters and god-daughters of important Germans, including senior members of the Nazi party; Himmler’s god-daughter and Von-Ribbentrop’s daughter attended the school in the 1930s.

This fascinating anomaly in British history felt like it had been swept under the carpet and Eddie wanted to explore a world where a slice of Nazi Germany existed on the south coast of England against the backdrop of the most seismic event in our history.

However, it was not until running into fellow actor Celyn Jones in Cannes to whom he pitched the idea that the project came a reality.

Celyn Jones is a critically acclaimed actor and BAFTA nominated screenwriter from Wales. The times referred to him as ‘the powerhouse writer-performer behind the greatest Dylan Thomas biopic yet’. Celyn wrote Set Fire to the Stars, which starred Elijah Wood. The film has had nominations for the Michael Powell award for the Best British Film, EIFF & MIFF Audience awards and won three BAFTA Cymru awards. Since then he has written the noir-thriller, The Vanishing, released in 2019 starring Gerard Butler & Peter Mullan and has co-written Eddie Izzard’s first screenplay, Six Minutes to Midnight starring Judi Dench and Jim Broadbent. Celyn is also a character actor in high demand, having recently acted opposite Alicia Vikander in Wim Wenders’ Submergence and played Winston Churchill in Agusti Villaronga’s Born A King.

Celyn and Mad as Birds were so excited by the idea they began work on the script with Eddie in the next few weeks and the pieces of the puzzle began to fall into place.

Director Andy Goddard was drawn to the project on its premise and creative team, the idea of working with Celyn Jones again and getting to work on Eddie’s first screenplay was an exciting prospect but the content even more so.

Andy Goddard is a writer and director working in film and television. His debut feature Set Fire To The Stars (2014) was nominated for the Michael Powell Award for Best British Feature and won three BAFTA Cymru Awards from its seven nominations. His television credits include Downtown Abbey, Daredevil, The Punisher and Altered Carbon for Netflix. Andy is currently director and co-executive producer on Carnival Row for Amazon.

The idea that these teenage girls lived on the south coast of England in the run up to the outbreak of the war was fascinating. What was their experience of England at that time, how did England treat them, how connected to Germany and national socialism were they?

Andy wanted to explore these thoughts and questions especially as they have significant parallels to current political events and increasing nationalistic sentiments.

The desire to connect a story set on the brink of WW2 to current politics became a strong sentiment held by the whole creative team; the desire to display fascism as a human problem not a “German” problem and highlight the fact we need to look at that key period of history as a cautionary tale of “simplistic politics”.

Beyond the politics the team were focussed on creating an entertaining a rich, ambitious, entertaining story with a real message at its core; people are all capable of good and bad. Andy was visually excited by using a quintessential British seaside town as the canvas for this this story, it’s such an iconic setting and landscape of a bygone era.

Also the juxtaposition between the fun and whimsy of a seaside town with the political machinations of war is a sets up a dynamic and unique backdrop.

These locations were key to Andy Goddard to really capture the spirit of the time as well as introducing small visual details indicating Britain was preparing for war that happen in the background of the main narrative, creating an incredibly rich setting.