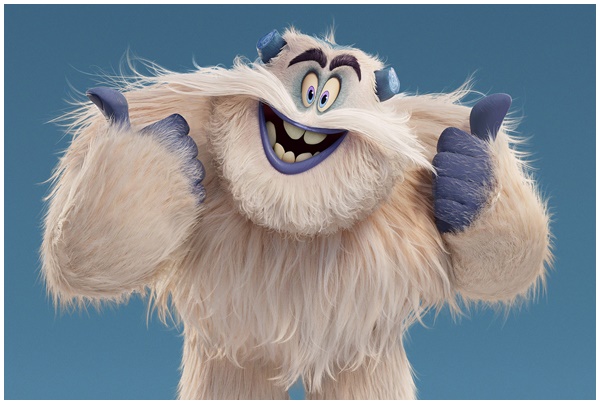 What if the giant yetis of legend are real and the stories we tell about them are like the tall tales they tell about us…but with a twist.

“For a storyteller, premise is everything,” states director Karey Kirkpatrick, who also shares screenplay credit with Clare Sera on Smallfoot , an animated adventure for all ages that turns a myth upside down when a bright young yeti finds something he thought didn’t exist—a human.

News of this “smallfoot” throws the simple yeti community into an uproar over what else might be out there in the big world beyond their snowy village, in an all new story about friendship, courage and the joy of discovery.

Directed by Kirkpatrick, Annie Award-winning director of Over the Hedge and Annie nominee for the screenplays for Chicken Run and James and the Giant Peach, the screenplay was written by Kirkpatrick and Clare Sera, screen story by John Requa & Glenn Ficarra and Kirkpatrick, based on the book Yeti Tracks, by Sergio Pablos.

“Turning a myth on its ear and playing around with a traditional point of view is irresistible.  We’ve all heard stories of these mysterious creatures with strange habits.  But what about our own strange habits?  Let’s face it, we’re weird creatures in many ways.  And it’s fun to take a comedic look at that from a different perspective…a yeti perspective.”

What if something you think doesn’t exist, thinks you don’t exist?

What if the giant yetis of legend are real and the stories we tell about them—with their thick wild hair, booming roars and enormous feet—are like the tall tales they tell about us…but with a twist.  To them, we’re strangely hairless little beasts with screechy voices and freakishly small feet.  And entirely imaginary.  That is, until one yeti sees a human with his own eyes and becomes a believer.

That’s the big idea behind “Smallfoot,” a joyful, laugh-out-loud, family-sized adventure set in a dazzling snowbound world above the clouds, that starts when a man named Percy comes face to face—or face-to-knee—with a yeti named Migo. This astonishing encounter sends them both on an unexpected journey of discovery that will open their hearts, challenge old ways of thinking and show them there’s more to life than they ever thought possible.

Shocked at first, even frightened, Migo and Percy are soon delighted to have found each other.  For Migo, capturing a “smallfoot” will be the greatest and most important thing he’s ever done, and he can hardly wait to tell everyone in his village about it.  If only he can get his tiny prize home in one piece.  For Percy, a down-on-his-luck animal TV show host, evidence of an actual yeti could put him one viral video away from the fame and glory he craves, and he’s determined to capitalize on this good fortune.  Even if it’s the last thing he ever does.

Once a pretty good guy, Percy has lately been making some questionable choices.  Maybe what he really needs is a walk on the yeti side to reset his priorities.  As for Migo, a yeti who now believes in the smallfoot despite everything he’s been told, it’s time for him to start thinking for himself.

But first, these two accidental trailblazers must navigate the rough terrain of the Himalayas and their own fears. Finding ways to communicate despite a colossal, and hilarious, language barrier, they need to truly understand the gifts of friendship and loyalty, and the importance of being true to yourself.

“Smallfoot” follows Migo and Percy through a realm rich with imagination, heart, humor and high spirits.

Says producer Bonne Radford, “My last four movies were musicals, and I believe that if you have a great scene or a plot point, telling it in song is not only more entertaining and emotionally engaging, it’s more efficient in terms of giving audiences a sense of your story and characters. The songs in ‘Smallfoot’ aren’t really Broadway and aren’t really pop. They touch on several bases and styles and fall together into a land of their own that’s really unique to the movie.”

Radford, marking her fourth feature with Kirkpatrick, recalls that in the project’s early stages, “Karey came aboard as a writer.  Then he became the director, and then he became a songwriter, because he has all those talents and that experience.  We couldn’t be happier that he was the guy to pull all of it together with the creative vision to make this movie come to life.”

The action, meanwhile, is packed with flights of hilarity inspired by the iconic Looney Tunes shorts. From gravity-busting boulders to freefalls from impossible heights, Kirkpatrick and his colleagues paid homage to these timeless comic tropes throughout the film.

“One of my favorite things about this movie is it’s such a throwback to those classics,” says Channing Tatum, who stars as Migo. “There’s a lot of physical comedy.  These yetis are just so huge, they’re indestructible, yet they’re vulnerable in small, funny ways—like, Migo pricks his toe and a tiny bubble of blood comes out and he reacts like he just lost an arm.  And there’s a goat that screams. He just screams no matter what happens, and he doesn’t have any other facial expression; just deadpan and panic.  I will laugh at that forever.”

By honestly addressing the story’s emotional stakes, the filmmakers gained leeway to play fast and loose with the physical stakes.  Says Kirkpatrick, “Making those tonal choices allowed us to run with it and truly take advantage of what animation can do, and you buy it because you’re having such a good time.  For our storyboard artists and animators to acknowledge animation pioneers like Chuck Jones and Friz Freleng, believe me, it’s like being a pig in slop.  How far can we push this? My answer was, ‘Go for it, make me tell you you’ve gone too far,’ and I believe those were the times where we came up with the biggest laughs.”

There are also, he acknowledges, nods to landmark cinema that should delight savvy fans. “Being a film buff, there are tons of images in my head.  There’s a sequence of Migo running from a plane that’s right out of ‘North by Northwest’ and another that’s an homage to one of my favorites, ‘Dr. Strangelove.’ That’s mostly for mom and dad but some of the kids will probably get it, too.  Kids are way smarter and savvier than we give them credit for.”

To that point, younger moviegoers will be quick to embrace one of the story’s central themes that celebrates what they’re already hard-wired to do: be curious and ask questions.  But “Smallfoot” takes it to a new level, as exemplified in the character Meechee: a real searcher and one of the very few yetis who harbors the secret hope that smallfoot might really exist.

“‘It’s not only about asking questions but finding your own answers and discovering the truth for yourself,” says Zendaya, who stars as Meechee.  “You can’t always be satisfied with what’s given to you or handed down.  Sometimes it’s important to step outside of that, and I think what’s cool about this movie is that it encourages seeing life through someone else’s eyes and having empathy and compassion for someone who may have an entirely different view of things.”

As the story opens, Meechee’s philosophy is summed up neatly with the aspirational song “Wonderful Life,” in which Zendaya sings “a life full of wonder is a wonderful life.”

The problem is, not everyone in the yeti community is on board with that open-minded and open-hearted approach.  In fact, they have laws against it that are literally written in stone and curated by Meechee’s dad, the Stonekeeper.  Played by Common, he is dedicated to maintaining the status quo by suppressing curiosity.  It’s a philosophy he just as neatly expresses in another song, “Let it Lie.”

Despite Migo’s evidence, Common explains, “He’s determined to prove that smallfoot doesn’t exist because it’s written in the stones.  If the village realizes that even one stone is wrong, it would break up so much of what they thought they knew.  It would shake up their belief in a system that has been working for so long and keeping them safe.”

Consequently, notes screenwriter Sera, “They’ve constructed a daily life so busy with rules that there’s no opportunity to stop and think.  The motto of the entire community is, ‘Ignorance is bliss.’”

Stonekeeper’s aversion to change makes things especially hard for Migo, Meechee and Percy.  His counsel will test Migo’s courage and commitment in ways he never imagined.  The question is, will he ultimately stand in the way of what this young yeti needs to do?  Because “Smallfoot,” at its core, is an adventure.

“Smallfoot” began with the inspiration its filmmakers drew from a concept presented by Sergio Pablos, one of the film’s executive producers and a veteran animator himself.  Producing partners Glenn Ficarra and John Requa, who also share story credit, explain. “The idea was about a yeti finding and interacting with a human, and that seemed so right for a movie,” says Requa.  “Then Glenn suggested: what if we flip it on its head, where the yetis were the ones who believed humans were a myth?  And that became the genesis of our story.”  With that, audiences could experience the encounter from both points of view, offering what Requa calls “an opportunity to see that what divides us is often just the unwillingness to see the other side, and not see each other for who we really are.”

“But the heart of the tale is about these two becoming friends,” Ficarra adds. “For all the slapstick comedy and the fun, their friendship remains the emotional through-line of the piece.”

“The stories we like best are layered,” says Kirkpatrick.  “Beyond an entertaining series of events, there are ideas lurking beneath, a little more meat on the bone, if you will.  In this movie we get into themes about truth and lies, questions and curiosity, and the importance of all of that in terms of our own advancement.  It’s pretty easy to circle yourself off in your own little tribe and say, ‘Yeah, this is our world and that’s all there is; there’s nothing else,’ like the yetis believe nothing exists below the mountain where they live.  So, to be involved with a story that’s about opening yourself up to life and other people was an exciting prospect.  And what better way to do it than with an 18-foot yeti and his friends?”

Most of all, it’s fun.  “I hope audiences enjoy this glimpse into a fun and lively world like none other,” Kirkpatrick concludes.  “It’s such a charming story.  We had an incredible cast and an amazing team pushing the boundaries of digital animation to assemble this movie, and I believe people are going to fall in love with these endearing characters as much as we have.”