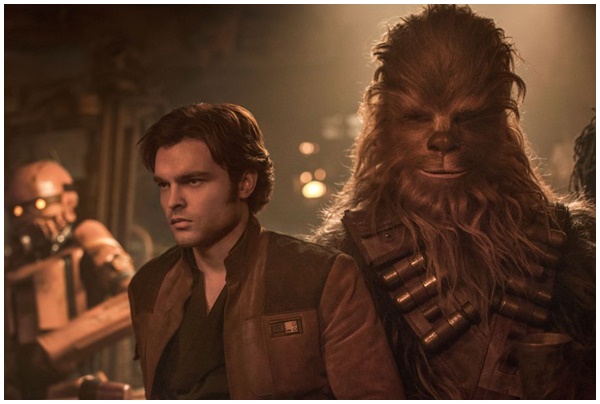 Solo: A Star Wars Story charts the adventure ﬁlled past of Han Solo, the iconic galactic scoundrel and one of the most beloved characters in cinema history.

Solo: A Star Wars Story oﬀers viewers a chance to ride along on Han Solo’s roller-coaster journey of selfdiscovery, which director Ron Howard describes as “about a character deﬁning himself and the relatonships that will form him.”
He adds, “Itulizes Star Wars and the galaxy in really cool ways, but you don’t have to know anything about it. You don’t have to have seen another movie, read a comic book, seen a cartoon or played a video game. This is about Han discovering himself and the universe.”

Through a series of daring escapades deep within a dark and dangerous criminal underworld, Han Solo will meet his mighty future copilot Chewbacca and encounter the notorious gambler Lando Calrissian, in a journey that sets the course of one of the Star Wars saga’s most unlikely heroes.

The camera is turned on Han Solo, the legendary smuggler with the heart of gold, in the second story ﬁlm from Lucasﬁlm, following 2016’s mega hit “Rogue One: A Star Wars Story.

Producer Kathleen Kennedy, describing what makes Han Solo such an iconic and beloved character, and one whom Lucasﬁlm was inspired to feature in a ﬁlm, says, “He’s very authentic. He’s a scoundrel, he’s a maverick, and there’s a mystery to him. Handsome, incredibly charismatic and adorable—that’s a pretty great combination for a Star Wars action hero.”

Interestingly, the “Solo” project was one of the ﬁrst George Lucas talked about when he outlined his plans to Kennedy for the Star Wars stand-alone stories. They both agreed that Lawrence Kasdan, writer of The Empire Strikes Back and Return of the Jedi, would be the perfect person to pen it. “Larry Kasdan knows Han Solo better than anybody,” says Kennedy. “Given his long association with Star Wars, and deep understanding of Han Solo’s character, there was no one better to tell the story, and preserve the spirit and feeling of the original movies.”

Writer Lawrence Kasdan was hooked the moment he found out the ﬁlm was about Han Solo, the character he is most passionate about in the Star Wars canon. “Han was always my favorite, right from the start,” says Kasdan. “He’s the most exciting guy in the saga for me. He’s unpredictable. He’s reckless. He’s not brilliant. He’ll say things that he can’t back up. He’ll leap in when he should stay back. There’s nothing more attractive to me than a screwup who’s actually got a good heart but hides it as best he can.”

During production on The Force Awakens, the veteran screenwriter found himself in the unique position of penning a new Han Solo adventure while witnessing the character’s death on set. It was a rare moment for any writer, and an opportunity he couldn’t wait to explore.

Kasdan cites Han’s introduction in Star Wars: A New Hope as the primary inspiration for exploring the character’s backstory in “Solo.”

Sharing Kasdan’s love for Westerns is his son and “Solo” co-writer Jonathan Kasdan, who has been a lifelong fan of the Star Wars movies and of Han Solo in particular.

Growing up in a “household of Star Wars,” as his father likes to say, Jonathan remembers the ﬁlms as being extremely inﬂuential on his development as both a writer and director. It was his enthusiasm for Han Solo, and intimate familiarity with the Star Wars universe, that formed a highly productive and creative rhythm between the two writers.

“I come at this as a fan who thinks of these stories as written in stone, while Larry comes at it as a dramat st who thinks of them as tools,” says Jonathan. “And because I’m more of a Star Wars geek than he will ever be, it formed a dynamic between us which determined how much of the lore we were going to be beholden to and how much we were going to go our own way. I think that my reverence and Larry’s conﬁdence complemented each other well in the writing process.”

Jonathan Kasdan, who was on set during the entire production of “Solo,” saw Alden Ehrenreich’s performance bring young Han to life. “Han is conﬁdent and funny, yet self-conscious and relatable. Alden is perfect in the role, and it was a marvel watching him perform,” comments the writer.

Alden Ehrenreich was one of the very ﬁrst actors the ﬁlmmakers saw. He was not widely known to mainstream audiences but had caught the ﬁlmmakers’ attention, and the critics’ alike, with his scene-stealing performances in Hail, Caesar!, Blue Jasmine and Rules Don’t Apply.

Producer Kathleen Kennedy comments, “Alden tapped into the things that make the character special but without imitating Harrison. He captured the essence, that maverick spirit. He was funny and charming, cool and handsome. He had all those qualities, but he also had that hidden vulnerability speciﬁc to Han. It was a very intuiti ve portrayal.”

Ron Howard concurs, “Alden is thoughtful. He’s an artist, and he’s very passionate about his work on a very pure level. He has thrown himself into creating this character, not as an imitation of Harrison but understanding the connection between Harrison, the Han Solo character and his own instincts that can connect him to the character in similar ways.”

As a major fan of the Star Wars ﬁlms, Ehrenreich was thrilled when he learned he had the role. “It’s really special to be part of a franchise that has so much heart and that means so much to people, and to play such a multi-dimensional character in the Star Wars universe.”

Ehrenreich recognized the responsibility of taking on the role of such a beloved iconic character, and he was raring to go: “There are so many things referenced in the original movie that the audience will get to see. Han meeting Chewie for the ﬁrst time. Han’s ﬁrst encounter with Lando. The Kessel Run. Han getting his blaster. And all the people Han encounters, the turns those relationships take, they have much to do with the person Han becomes. It was all a really thrilling prospect.”

He was excited about the ﬁlmmakers’ approach to the material as well. “I loved their vision,” Ehrenreich says. “I loved the humor and the angle they were coming from. It’s a big epic adventure story with a crew of people at the heart of it that you care about, and who care about each other. But because of Han’s nature, the world he grew up in and the people he meets, there’s an edge to the story, and a toughness, which gives it a really cool vibe.”

One aspect of the story that both writers were determined to explore further than previous ﬁlms is the relationship between Han and Chewbacca. As a father-and-son writing team, each found the inseparable duo one of the most endearing qualities of the original Star Wars movies.

“I love that relationship,” says the elder Kasdan. “I love all the quali es that are embodied by it. There’s courage, there’s teamwork, there’s loyalty and there’s a slightly canted view of the world. Their relationship is reassuring, recognizable and speaks to the best in each of them.”

“They had that great partnership,” agrees Jonathan. “It was loaded with love, was never cruel or hostile, and was just a real intimacy.”

Just as important to both Kasdans was creating a story that was unlike any other Star Wars ﬁlm before it. They wanted “Solo” to be the most character-ﬁlled and character focused story yet, but one that still honors the legacy of the saga. “This is a story that comes out of old- me storytelling,” says Lawrence. “It’s a story about someone being forged in the crucible of life—in danger, in violence and in love. It’s about how a person is formed.”

“Other people will judge if that’s true,” he continues. “But for me, that part has been totally achieved.”

Director Ron Howard, a self-avowed Star Wars fan, whose friendship with George Lucas goes back to Lucas’ early ﬁlm, 1973’s “American Graﬃ ,” appreciated the merit of this father-and-son writing team. “Larry Kasdan is the greatest resource, not only his sense of Star Wars, but his overall sense of movies and movie heroes, where those muscular action situations intersect with character and test the character in ways that are thematically interesting, and sometimes moving and surprising. Jon loves movies, and he is encyclopedic about them. He thoroughly understands what’s great about Star Wars, what’s great about Han Solo, as a classic movie character. But, critically, he also has a cutting-edge sense of humor and a contemporary sensibility.”

Adds Howard, “This ﬁlm is charged with youthful energy and cool. While it had to be true to the aesthetic and sensibility of Star Wars, we also wanted to push the envelope to make it work for young audiences, so it would feel more relatable than nostalgic. And yet, in a way, this is the ﬁrst real character study in the galaxy so far for fans. The story very much reﬂects the spirit of the original movies in the combination of playfulness, thematic focus, mixed with great action, and a universe that is fascinating, inviting, entertaining and a little bit thought-provoking.”

“Solo” explores Han Solo’s formative years and follows his journey through a series of impactful encounters, combining themes of trust, loyalty, love and betrayal with light-hearted humor, wit and rollicking action. As Howard explains: “This is a rite-of-passage story, consistent with Star Wars, with many themes that will resonate with audiences. It’s about one character’s journey, the way that he is tested by the unique challenges that he faces and by the people he meets, to become the character we know so well.”