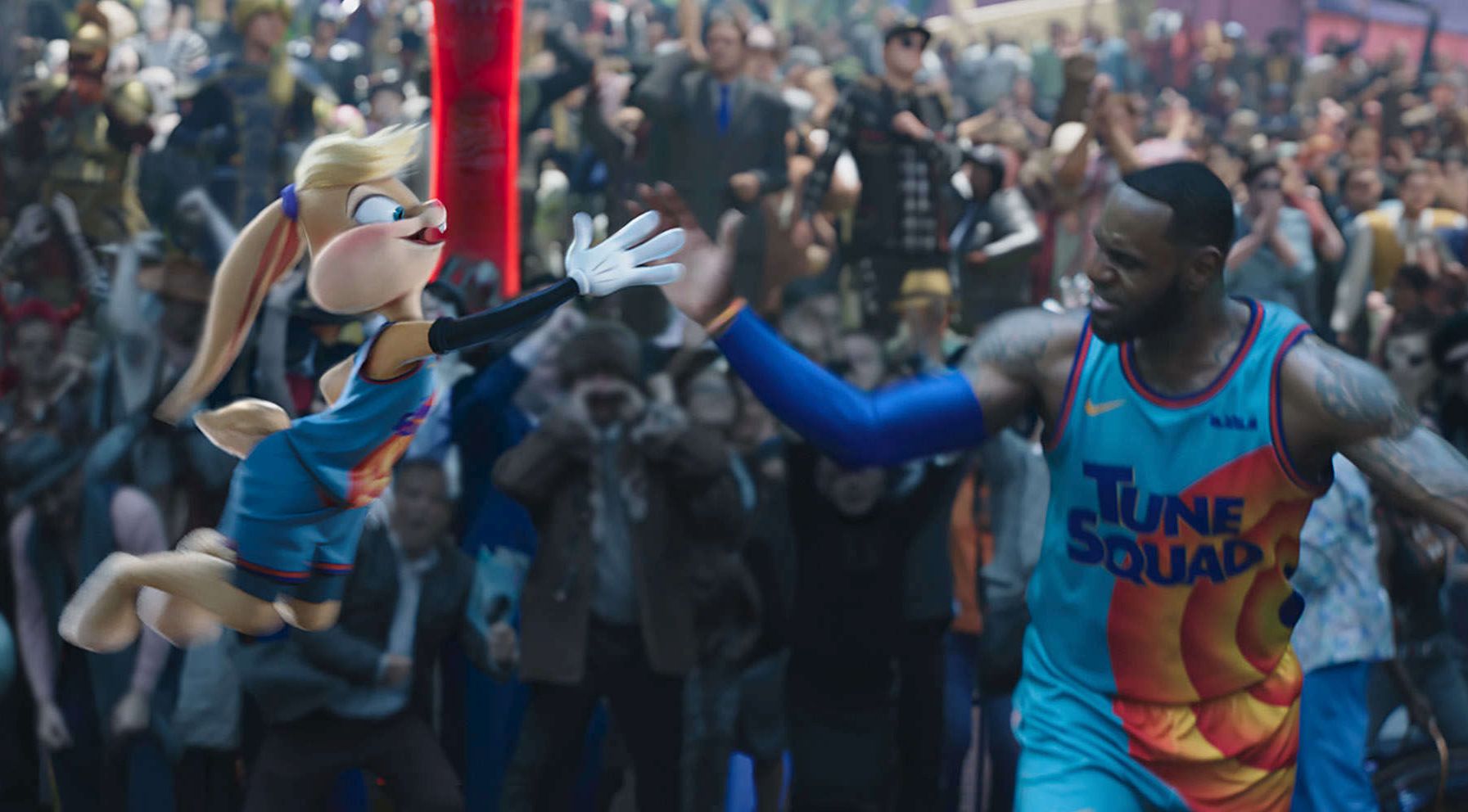 This transformational journey is a manic mashup of two worlds that reveals just how far some parents will go to connect with their kids. When LeBron and his young son Dom are trapped in a digital space by a rogue A.I., LeBron must get them home safe by leading Bugs, Lola Bunny and the whole gang of notoriously undisciplined Looney Tunes to victory over the A.I.’s digitized champions on the court: a powered-up roster of professional basketball stars as you’ve never seen them before.  It’s Tunes versus Goons in the highest-stakes challenge of his life, that will redefine LeBron’s bond with his son and shine a light on the power of being yourself. The ready-for-action Tunes destroy convention, supercharge their unique talents and surprise even “King” James by playing the game their own way.

The real LeBron James has always felt a special connection to “Space Jam.”

“When I was 12 years old, I needed inspiration where I was growing up,” he states. “Michael Jordan was one of those people who gave me inspiration, along with my mother. When I think back on watching ‘Space Jam,’ always having a love for Bugs Bunny and the Looney Tunes, and then you add Michael Jordan, one of my favorite inspirations growing up? It felt like it was a match made in heaven for me.”

In the 25 years since the original film’s release, James has ascended to the top of his game on the court. Now, he finds himself in front of the camera, in an effort to carry on a legacy he’s proud to uphold. “It’s an honor for me to be a part of the ‘Space Jam’ world, to be able to reintroduce it to kids today and show them how unbelievable the Looney Tunes are, and how great our sport of basketball is, as well.” And, as in the first film, he teases, “There are also some things in this movie that will catch a lot of people off guard. That’s what’s exciting about it.”

James enjoyed the process of playing a fictionalized version of himself, finding moments of truth nestled between elements that resemble much of his real life. “This is a fictional version of me, but it’s also kind of who I am as well,” he admits. “Even though it’s going to be on the big screen and you’re going to see me in a different light of parenthood and a different light in terms of being a basketball player and a leader and things of that nature. But I also think it will work well for the character as I was able to implement a lot of things that I actually do when the cameras aren’t on.”

As a result of the film’s blending of live-action photography and digital animation, James often found himself acting with yet-to-be-drawn co-stars, a creative hurdle for even the most seasoned performer. “It’s challenging when you’re doing a scene and you have to visualize a lot of the Tunes being there. It becomes about being able to use your imagination. I think as adults we sometimes lose our imaginations as we get older. So I’m just bringing that back into my life right now, just trying to be able to spice that imagination back up, which is a pretty cool thing as well.”

The task of helming this massive cinematic undertaking fell to director Malcolm D. Lee, who embraced the opportunity to reimagine the concept for a much different world than the one we knew back in 1996.

“We’re in an era where everything is digital and electronic and on the web, you know? Everything’s about video games and virtual reality, and so our characters—LeBron James and his son—go into a video game. It’s a great way to reintroduce Looney Tunes to the big screen, with the help of one of the greatest basketball players to ever play.”

Producer Ryan Coogler agrees, adding, “It’s a story with a lot of scope that has predicaments that you wouldn’t necessarily see coming. This film exists at the intersection of entertainment in a way that’s so incredible. But at the end of the day, it’s a story about family. It’s a father/son story.”

Maverick Carter, LeBron’s longtime friend and business partner, and CEO of The SpringHill Company, also serves as a producer on the film. Carter believes now is the perfect time to revitalize the “Space Jam”name, and that James is uniquely situated to usher in its return.

“I think now is the right time to reintroduce this worldbecause we’ve landed on a story that’s really amazing. As everyone knows, when you’re making a movie or TV or anything, the story is what really matters. This story landed in a place that I truly believe LeBron—as an actor, as a basketball player, as a human, as a father, as a son—is uniquely positioned to be at the center of. It’s a totally new film that really has a message and deals with issues that the world can relate to.”

In addition to handling the fun and the family themes inherent to the story, Producer Duncan Henderson admires Lee’s adept ability to work within the hybrid film’s different modes.

Of course, the film has another universal draw, one James is undeniably grateful for and humbled by: “Basketball.

Basketball is the greatest sport in the world in my opinion, and we are all over the world. You look at the professional leagues and you have people not only from America but from everywhere. Basketball taps into so many different households because the game just resonates with so many people in the world. And then when you add these classic cartoon characters and their humor… I mean it’s all about smiling, and being happy, and laughing together. Those are the ingredients to success.”

Space Jam: A New Legacy presents a new age take on the classic Tunes vs. Goons showdown, not only in its high concept storyline and revitalized cast of characters, but also in the animation techniques utilized by the filmmakers to bring the Tunes into the modern forefront.

“We have everything,” says James. “It’s live action here, it’s CG animation there, there’s 2D in this sequence…There’s so much going on in the movie. I think it’s going to keep the audience of  kids and their families off balance. I think that’s one of the greatest parts of the whole movie.”

Coogler agrees, stating, “Malcolm and the whole team really take advantage of all of the cutting-edge filmmaking technology. Like LeBron says, we have motion capture, we have traditional 2D animation, and we have some of the craziest techniques that actually had to be developed for this film.”

The filmmakers felt a certain responsibility to the classic cast of cartoons and worked diligently to strike a balance between dynamic revival and respect for the original characters. While the practical sets were built and captured primarily on the Warner Bros. Studios Lot, the challenge of bringing to life this behemoth of animation—the Warner 3000 server-verse and the multitude of content within—fell to veteran animation supervisor Spike Brandt and Devin Crane, who served as both co-animation supervisor and animation production designer on the film.

Accomplishing this nostalgic update took “tons of research,” Crane recalls. “You start getting into your research and getting specific about things. You’re always looking for something new, trying to find stuff that hasn’t been done before. I think that’s the most fun part. You start doing paintings and working with your art teams and just throwing stuff out there, just to see what could be interesting, what could be new. We’re looking at the shots and trying to pepper in all these Easter eggs and fun characters from throughout the Looney Tunes history and the H&B [Hanna Barbera] legacy, and there’s just stuff you’ve never got to work with before, like King Kong, Iron Giant, the Gremlins, the Flintstones… That makes it all the more fun.”

When it came to the actual animation, utilizing a combination of modern-day CG imaging technology and hand-drawn 2D animation, the filmmakers were able to create a world that feels both classic and cutting-edge.

“The one thing we were really passionate about was making these Tunes feel real,” says Crane. “I think that all of these Tunes are real to us. Audiences have grown up with these characters, Bugs Bunny and Daffy and Porky…you know who they are. I think the insurmountable responsibility of that is making sure you don’t lose those personalities. It’s how they behave, how they stand, how they move. And then also making them feel real to each other, knowing that these aren’t just CGI characters or 2D characters. For them, they are real, and they’re living.”

Lee summarizes, “As filmmakers, as entertainers, what we hope for this film is that it will have a very broad reach so far as the global audience, both because of all the touchstones of Warner Bros. properties, like the Tunes and the other fun elements we dropped in, and also because it’s infinitely relatable. It’s a family movie at its heart, featuring a legendary sports figure in LeBron James, and with universal themes that everyone can relate to. Everybody has family, and everybody struggles with the differences within their family, but at the end of the day there’s love, there’s care, there’s acceptance.”

Juel Taylor & Tony Rettenmaier (Screenplay by / Story by) met while earning their MFAs from USC’s Film & Television Production program. After graduating in 2015, Taylor was selected as one of five fellows for Universal’s Emerging Writers Fellowship. Taylor and Rettenmaier’s TV show, Birth of Cool, was ordered straight to series by BET+ with Macro, and Endeavor Content producing alongside Lena Waithe. Taylor wrote Creed 2, and then along with Rettenmaier wrote Shooting Stars for SpringHill and producer Terence Winter. Taylor recently directed episodes of Boomerang and Twenties for Lena Waithe and BET, and just wrapped his directorial debut They Cloned Tyrone, an original feature he and Rettenmaier wrote, for Macro and Netflix, which starred Jamie Foxx, John Boyega and Teyonah Parris. Last year, in a bidding war, the duo sold an original film, ByAll with Steven Caple, Jr. attached to direct.

Keenan Coogler (Screenplay by / Story by / Co-Producer) started his young career off assisting his brother Ryan Coogler through every stage of production on Creed and took on the same role for the entire writing/directing phase of Black Panther.  He also co-wrote the Omeleto comedy short Rachel from New York with director Jeanne Jo.

Terence Nance (Screenplay by / Story by / Executive Producer) has won and been nominated for a long list of prestigious awards for his many short films, including the Humanitas Prize and the Blackstar Film Festival Jury Prize for They Charge for the Sun, the Sundance Grand Jury Prize for Guisado on Sunset, and the AFI Fest Grand Jury Prize for both Univitellin and Swimming in Your Skin Again, and, in long form, the Black Reel Awards Outstanding Independent Feature and the Gotham Awards’ Gotham Independent Film Award for Best Film Not Playing at a Theater Near You for An Oversimplification of Her Beauty, to name a few. In 2017, Nance directed the experimental 18 Black Girls/Boys Ages 1-18 Who Have Arrived at the Singularity and Are Thus Spiritual Machines: $X in an Edition of $97 Quadrillion, and in 2018 wrote, directed, edited, executive produced and appeared in the TV series Random Acts of Flyness.

Celeste Ballard (Screenplay by) is currently writing the animated feature Shining Armor for Netflix. Her feature Strangers, which is set up at Netflix with Likely Story producing and Jennifer Kaytin Robinson attached to direct, will go into production this summer. Previously, she was a story editor on Wrecked at TBS and a staff writer on MTV’s Sweet/Vicious. She was also the head writer of Lorne Michaels’ Above Average Presents, and she got her start on Saturday Night Live.