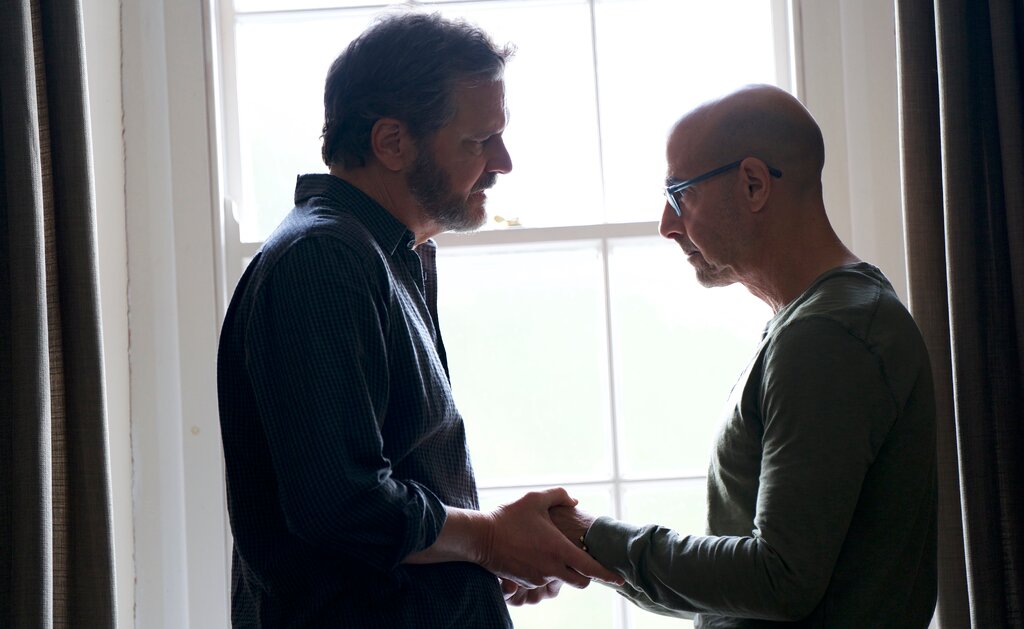 Combining a classic road trip adventure with a heart-wrenching tale of love and loss, the superb Supernova is a devastating, but beautifully poetic story told by British writer-director Harry Macqueen

“Making Supernova has been one of the most profound and important experiences of my life,” says Macqueen.

Supernova stars Colin Firth and Stanley Tucci and follows a loving couple who go on one last trip together following a diagnosis of dementia. An established novelist, Tusker seems accepting of his fate even as his memory lapses make it impossible to put word to page. Sam, on the other hand, can’t accept how quickly the end of their journey is approaching.

“The characters and themes reflect my attempt to do these people and their stories justice in a truthful and original manner – to place a selfless, loving relationship in the context of an immediate future that hangs in the balance. From the outset, my desire was to make an empowering, powerful, challenging, and timely film about what we are willing to do for the people that we love.

Supernova is an honest look at a loving couple that is facing one of the toughest things many families are going through now, a journey that started for Macqueen in 2015.

“The story really is inspired by those people that were kind enough to give me their time and share their experiences with me,” says Macqueen.

“It made me want to learn more about it, so I then went on a sort of two or three year-journey of research where I worked with a lot of people who were living with this condition. I volunteered a lot, and I worked at a dementia specialist hospital in London.”

“It made me want to learn more about dementia—young-onset dementia specifically. So, I then went about researching it for about two or three years. I worked at various charities, and I spent a lot of time with people who are living with dementia. So, the story really is inspired by the time I spent with those people.”

“I’m still involved in that world quite a lot. Here in the UK, and I expect it’s the same in the United States, most people who have had COVID-19 now have dementia. It is scary as I expect we’ll be seeing even more cases of early onset dementia from now on.”

Macqueen developed the screenplay over a three-year period, working closely with leading dementia specialists at University College London (UCL) and The Wellcome Trust, a charity dedicated to supporting science and research in the fields of biomedical research and medical humanities. He also collaborated with many individuals and families affected by the condition.

Once the script was finished, Macqueen and his producers moved on to casting. They discussed the notion of making one of the couple American, and what that might do to the dynamic of the film’s primary relationship. “The fact that one of them was American became a strategic way of not making the project feel too British,” notes producer Emily Morgan. “We liked the idea of coming at it slightly from left field, so that there was an edge and originality to the pairing.” That’s when they came up with the notion of approaching Stanley Tucci, who lives in London. “He has that edge of being American, but at the same time he’s so embedded in the UK,” added Morgan. “He was an ideal choice.”

“If you’re taking characters out of their natural environment, that’s always an interesting thing to do dramatically. And with a road trip, you’re throwing them right in to everything – it couldn’t be more public,” says Macqueen. “That’s how we filmed it too, incidentally. There was no closed roads, Colin really drove the van; we were all in the van scared to death whilst he was driving.”

For Macqueen the road movie felt like a good genre to explore with this film, and an original thing to do.

“I hadn’t seen it done before with this type of story, which is always what you try and do,” he says. “And also, I think what’s cool about making road movies in England is that no one makes road movies in England, really. It’s the stuff that you guys do a lot more and a lot better than we do. I think there’s something interesting in that: you drive for long enough in the UK, and you fall into the ocean. You can’t go on journeys that are that long, so it felt like an original thing.”

“I really wanted to work with two actors, hopefully, that knew each other a bit. When Stanley Tucci suggested Colin, and then told me that Colin had actually read the film and loved it, it was as easy as that, really,” says Macqueen.

Stanley Tucci, for his part, was “floored” by Macqueen’s screenplay.

It was during Tucci’s first meeting with Macqueen that the subject of who would play Sam, the other half of the relationship, was first broached.

“We got on famously,” Macqueen remembers, “and during my meeting with him, he said, ‘Can we talk about who plays opposite me? Have you thought about Colin Firth? Because I could get the script to him.’ Of course, I said, ‘That would be amazing, thanks very much.’ And Stanley said, ‘Good, because I gave it to him yesterday, and he read it and loves it and he wants to meet you.”

Macqueen offered the role of Sam to Tucci and Colin was gonna play Tusker.

When Tucci read the screenplay he kept, ‘Something’s wrong. I wonder if we [switch].’ And then Colin comes to me one day, he goes, ‘We should switch roles.’ And I said, ‘Yeah, I’ve been thinking the same thing.’ So we went to Harry and, poor Harry. It was just like, ‘Oh god, why did I get stuck with these two?’ And then he said, ‘Alright, well, let’s read it. Let’s pick some scenes and we’ll read them one way, we’ll read them the other way.’ And we did and it was pretty evident that that was the way it was supposed to be.”

While the end result might suggest Tucci and Firth were perfectly in sync throughout production, Tucci process differs from Firth’s.

“I will stray outside the script. I’ll improvise quite a bit. I’ll repeat things. Like the scene in the bed, when we fall out of bed. It’s in the script, but then I just sort of expanded it and changed it. And I’ll throw things in to just – I don’t know why. I have no idea why! I guess to keep it fresh, to keep it honest, to keep it real, but certainly without destroying Harry’s beautiful script. And luckily Harry was fine with that. So I’m much more likely to do things like that. If Colin says something to me when we’re riding in the car, and he has line, then I have a line, then he has a line, then I have a line, if I couldn’t hear him I would just say, ‘What?’ And he’d have to repeat the line. I mean, I sort of heard him, but I wanted just to say ‘what’ because it was so loud in there. It just seemed more natural. And I think what that does is it keeps you on your toes. It keeps both of us on our toes, and I think that’s a good thing.”

Firth and Tucci have been friends ever since they met on the set of the 2001 HBO film Conspiracy when they played Nazi officials, they now live close to one another in London.

“Colin’s an incredibly good person and a great friend. He’s a great father, and he’s just one of the best actors ever. And we have the best time together. We don’t seem to get bored of each other, which doesn’t really make any sense because we’re not very interesting.”

For Tucci, the film offered a chance to explore a difficult subject in a tender, matter-of-fact way.

Colin, who was nominated for an Oscar in 2010 for his performance in Tom Ford’s film adaptation of queer literary icon Christopher Isherwood’s A Single Man, has always been serious about taking on gay roles throughout his career.

“It’s our responsibility to be sensitive to whether there are times we should step out of it. You know? Whether there are times where we feel that there’s something we really can offer, whether we’re gay or straight. I’m hypersensitive to it, to the point where every time I take on a role, I always feel I don’t really have the right. I’m trying to take a step into someone else’s experience. I always feel what the hell do I know? Who do you think you are? That’s where the challenge lies. I just hope that if I put enough thought into it, and enough empathy, and I’m brave enough, and those are things I don’t always live up to, but if I keep that pursuit going that maybe I’ll find something that resonates with the people whose lives I might be representing.”

“Tusker a man for whom his sense of control is very, very important to him,” says Firth, 60.

“My encounters with dementia, and they are very close to home for me, made me recognize that. I found that very truthful and authentic.”

Adds Tucci, who heavily researched the role: “When you see people with it, they do what the actor should do…play against it and laugh about it, even, before falling apart. Then the person who’s taking care of them ends up having the reaction you think the person who has dementia would have. That’s the thing that makes it so complicated and so painful.”

“Any role you do, you just want to do it well. You want to be truthful, and you don’t ever want it to be a sort of send-up or a mockery or anything like that,” Tucci added, about the progress that has been made when it comes to LGBTQ+ representation and how flattering he finds it that some people in the community say he and Colin are some of the only straight actors allowed to take on queer roles.

“I think the thing that attracted me to the film was the beautiful script, and Harry’s realization on paper of a beautiful, loving relationship. Now, the story could have been told with a heterosexual relationship, but what I loved about this was that sexuality was of no consequence. There was only love that was of consequence, and that is profound. Then loss is of consequence. And what I think the movie shows is that it makes great strides in the way that everybody thinks about love, which is it’s just love, it doesn’t matter who it is, who it’s between. Gay, straight, whatever. Our sorrows are the same, and our pain is the same as well. So, in this tiny little film, I think Harry sends a pretty big message.”

“I think Stan has surpassed himself here, which is quite a bar to surpass,” says Firth. “Supernova’s beauty lies in the realistic, tough portrait of true love brought so effortlessly to the screen.

“In a way, most of our job was done for us simply by being as close as we are,” Tucci says. “It was a gift.”

“I think there’s something very surprising, and really lovely and warm and uninhibited, that they bring out of each other in this film. Everything they do just feels so plausible and effortless and easy, and that’s really hard to do. We all worked really hard to make that happen, all three of us. But those guys did a good job, for sure.”