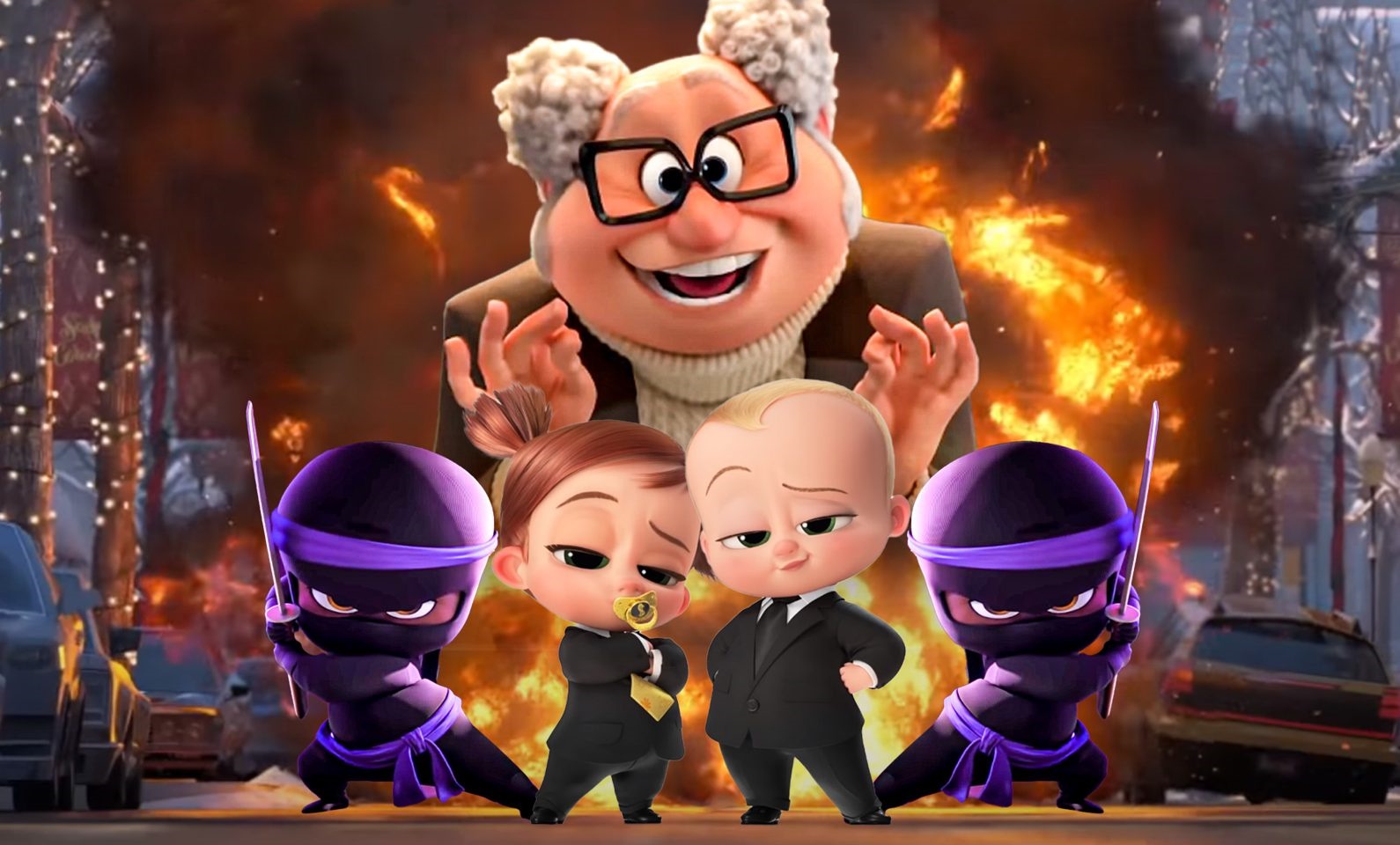 For director Tom McGrath, screenwriter Michael McCullers, and their extraordinary team at DreamWorks Animation, the The Boss Baby: Back in Business offered them a chance to revisit some of their favorite characters.

“The whole movie has a very specific rhythm that’s a lot of fun to write, so I was looking forward to seeing them as grown-ups,” McCullers says. “Tom was involved from the very beginning of conceptualizing the story, and we tried to keep things loose and give ourselves time to brainstorm. Rather than fixate on a certain plot or premise right away, we concentrated on what made us laugh, what would be interesting for these characters to go through, and what themes resonated with us—and, hopefully, the audience.”

It has been five years since the world was introduced to the imaginative world of Tim Templeton and his unusual, black-suit-wearing, briefcase-carrying younger brother, Ted, in The Boss Baby. Although it was nominated for a Best Animated Feature Oscar, earned more than $500 million worldwide, and inspired the popular Netflix series, when DreamWorks Animation first approached McGrath in 2018 about directing a new chapter in the franchise, he wasn’t sure about it at first.

“At that point, I had done five movies back-to-back and was thinking about taking some time off,” McGrath says. “The Boss Baby had been my pet project after the Madagascar movies, and originally I had just wanted to tell a story about two brothers. But then, I started to think what we could do in a second movie. I thought, ‘Well, we ended the original movie with Tim as an adult, so we could pick up the story where we left off.’”

McGrath was soon reunited with the first film’s writer, McCullers, and the two spent time at the McGrath’s home in Burbank to brainstorm the storyline. “In The Boss Baby, we had set up the idea of a secret formula that turned adults into babies, so we thought, ‘Why don’t we have a super-duper concentrated formula that turns both Tim and Ted back into kids,’” McGrath says. “Then, we started to think, ‘What if they grew up, lived separate lives, and grew apart,’ which is personally what happened to me and my own brother. My older brother showed me how to make movies when I was 10, but I was the one who ended up moving to Hollywood, while he started a family at a young age and stayed in our hometown in Washington state. In a way, I was envious that I was so involved in my work that I never got to start a family, and he didn’t pursue his filmmaking dreams. That was a great contrast between the characters, and we worked that angle in the movie as well.”

With McGrath once again at the helm and Jeff Hermann taking over as the film’s producer, the sequel is set 25 years after the first film, and it finds Tim all grown up and married to power-entrepreneur Carol with two daughters of their own, Tabitha and Tina. After Tina reveals to Tim that she’s the new Boss Baby and is leading a top-secret investigation into the nefarious practices of Dr. Armstrong, the enigmatic principal of Tabitha’s advanced school, both Tim and brother Ted rely on the magic formula to become kids again and save the world from the principal’s evil plan. Along the way, Tim not only rekindles his relationship with Ted, but discovers new ways to understand and bond with older daughter Tabitha.

McCullers and McGrath worked hard to retain the same inventive, positive spirit of the first movie. “It’s silly and joyous, but at the same time, it resonates emotionally,” McCullers says. “First and foremost, these movies are about brothers, and even when we’re being really broad in the comedy, we try to base it on some kind of truth in that relationship between brothers. Luckily, brothers do a lot of dumb stuff to each other, so it leads to a lot of conflict and physical humor.”

As producer Hermann points out, a big joy of the movie is exploring the grown-up Tim’s relationship with his daughters. “One of the project’s happy surprises was how it broadened out from a brothers’ story to an ensemble piece, particularly thanks to our amazing voice talent,” Hermann says. “One of the sequel’s most powerful elements is Tim and Tabitha’s relationship, which evolves as the result of them spending time together when Tim becomes a little boy again. This father-and-daughter story brings an additional level of sweetness and sincerity to the overall mix.”

For DreamWorks Animation president Margie Cohn, The Boss Baby: Family Business felt like the perfect opportunity to revisit some beloved characters and to see the original film’s premise unfold in a modern world. “Boss Baby offers a fantastical setting and grounds it in a relatable family situation,” Cohn says. “Sibling rivalry is still funny when brothers Tim and Ted grow up, and putting Tim’s daughters in the mix with their more contemporary point of view heightens both the comedy and heart.”

As DreamWorks chief creative officer Kristin Lowe points out, both movies excel at offering the perfect combination of wild situations and honest, heartwarming observations about human dynamics. “The thing that will always resonate for family audiences about The Boss Baby movies,” Lowe says, “is that no matter how outrageous these scenarios are, what it always comes back to is that there’s nothing more important than the people you love.”

Looking back at the journey to make the sequel during the COVID-19 stay-at-home months of 2020, McGrath is grateful that his team was able to devote so much time, talent and energy to the production. “We have had such an amazing crew, and it feels like we became even closer because of the pandemic restrictions,” McGrath says. “It’s a weird paradigm that we can actually make a movie this way, with most of us working at home on our computers. We have been able to make it work, despite all the challenges. Of course, some of us visited the studio to check the colors and details and make sure everything works on the big screen.”

The director says he hopes families will be inspired by the positive message of the movie, while enjoying the physical comedy and the humor we have all come to expect from The Boss Baby universe. “We are hoping that people will be inspired to reach out to an estranged family member after they see the movie,” McGrath says. “Wouldn’t it be great to call your mom, dad, and siblings and forget about that stupid argument that created a rift between you? Especially, since the movie is set during the year-end holidays, I hope it resonates with its message of unity and celebration of the family.”

Tom Mcgrath (Directed by/Story by/Executive Producer) has been working in the entertainment industry for more than 30 years. McGrath directed the Academy Award and Golden Globe nominated film The Boss Baby, from DreamWorks Animation. He once again returns as director to the sequel with The Boss Baby: Family Business, his sixth film as director for a DreamWorks Animation title, the most of any director at the studio. His films have grossed over $2.7 billion dollars at the worldwide box office.

Following the runaway success of 2005’s box-office hit Madagascar, for which he directed, co-wrote and voiced the lead penguin Skipper, McGrath reprised the same roles in Madagascar: Escape 2 Africa and Madagascar 3: Europe’s Most Wanted.  In addition, McGrath voiced Skipper for the Penguins of Madagascar TV show on Nickelodeon, and the short films The Madagascar Penguins in a Christmas Caper, Merry Madagascar and Madagascar.

Prior to joining DreamWorks Animation in 2000, McGrath worked as a story artist and concept design artist for such feature films as Cats & Dogs and How the Grinch Stole Christmas.  He also worked as an animator and story artist on such animated films as Space Jam and Cool World. His television work includes directing on The Ren & Stimpy Show as well as other projects for Nickelodeon. He is a graduate from the character animation program at Cal Arts and also studied industrial design at the University of Washington.

Michael Mccullers (Story by/Screenplay by) is a screenwriter and director who works in feature film and animation. In addition to writing The Boss Baby: Family Business, he wrote the The Boss Baby and co-wrote Hotel Transylvania 3, both of which opened number one at the box office and grossed over $500 million worldwide.

After beginning his career on the staff of Saturday Night Live, he made his screenwriting debut with the hit comedy Austin Powers: The Spy Who Shagged Me and collaborated with Mike Myers again on its sequel, Goldmember. He wrote and directed Baby Mama starring Tina Fey and Amy Poehler, and is attached to direct Party Animals, an animated feature film at Netflix with original music by Ed Sheeran.