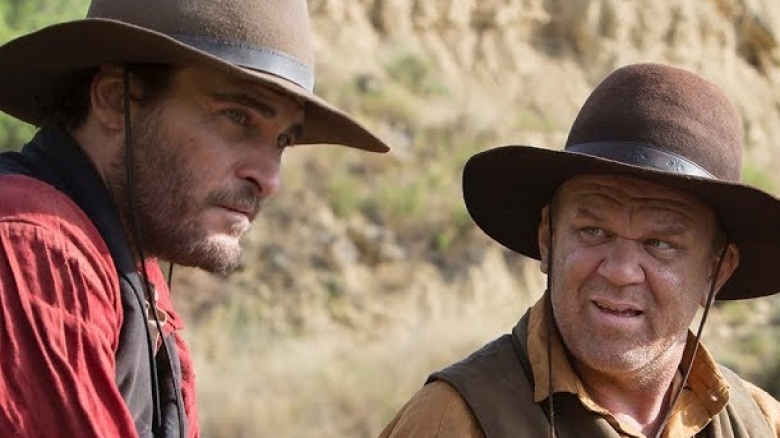 A film about brothers set against the backdrop of a unique time and the attractive expanses of the West, where dreams were followed.

With The Sisters Brothers, acclaimed director Jacques Audiard, as he has before, takes hold of the reins of blood ties — this time in the context of the Western genre. The result is shot through with the tension of his films like A Prophet and The Beat That My Heart Skipped, as well as with the hard-won compassion of his more recent Rust and Bone and Dheepan.

“When you’re with a sibling or a relative, there’s this sense of inescapability,” reflects actor John C. Reilly. “It’s a feeling of being joined together. The relationship is not a choice; it’s fate, and it’s blood. You can’t get out of it, but can you get through it?”

Audiard and his frequent collaborator Thomas Bidegain adapted the new film’s script from the novel The Sisters Brothers by Patrick deWitt, which was optioned by Reilly and Alison Dickey as producers in 2011.

“I had worked with John on Terri, having written that film’s screenplay adapting some of my unpublished writing,” says Patrick deWitt.

It is 1851, and Charlie and Eli Sisters (Joaquin Phoenix and John C. Reilly) are both brothers and assassins, boys grown to men in a savage and hostile world. They have blood on their hands: that of criminals, that of innocents…and they know no state of existence other than being gunmen. The older of the two, introspective Eli (Reilly) rides hard with his younger sibling yet dares to dream of a normal life. The younger of the two, hard-drinking Charlie (Phoenix) has taken charge with gusto as lead man on the duo’s assignments. Each increasingly questions, and quibbles with, the other’s methods.

The Sisters brothers find themselves on a journey through the Northwest, bringing them to the mountains of Oregon, a dangerous brothel in the small town of Mayfield, and eventually, the Gold Rush land of California — a journey that will test the deadly family ties that bind. But, can it also be the path to rediscovering what remains of their humanity?

“Azazel Jacobs read The Sisters Brothers in rough-draft form and thought that John would react positively to the material. He asked me, ‘Could I give the book to John?’ and I said, ‘Please do.’ John’s reaction was strong and he right away wanted to get behind it as a project.”

“I tend to procrastinate about reading. But when I got The Sisters Brothers, I read it in 24 hours,” says Reilly. “I felt immediately connected to the characters, especially Eli Sisters. The dynamic he has with his brother Charlie resonated with me; I have three brothers of my own. It was also really funny, and there was an emotional availability rather than the macho impenetrability of characters in the Western genre.”

DeWitt explains, “I was thinking a good bit about Charles Portis, an author who is most famous for True Grit though others of his books aren’t Westerns at all; and the Monterey novels of John Steinbeck. I had started with a dialogue scene of two men on horseback, and it was just sort of happenstance that I wrote a Western.”

Reilly offers, “What I found fascinating about Patrick’s language in the book was that we have assumed, through films and television stories about the West, that people talked in these rootin’-tootin’ ways — and you realize, maybe it wasn’t like that at all. They didn’t have radio or movies or television, just the written word. There would have been a heightened sense of formality — and treating people with respect or not could mean life or death.”

As Reilly’s producing partner, Dickey notes that “we’d been looking for a Western for John to do; it’s a form where we can tell elemental stories about ourselves. I stayed up all night reading the book, it was so good.” The book was also considered good enough to be shortlisted for the prestigious Man Booker Prize for Fiction, at which point “Hollywood started calling,” smiles Dickey.

Accordingly, she and Reilly allied themselves with Academy Award-nominated producer Michael De Luca (The Social Network) to move the project forward. De Luca had first worked with Reilly nearly two decades prior, on the award-winning Boogie Nights.

The producer says, “John is one of the great American actors and the part of Eli Sisters absolutely seemed to be a role that he was destined to play. Having John as a fellow producer this time around too made working on this project all the sweeter. Patrick deWitt’s novel is a modern classic, in my opinion. I love Westerns, but this is also a fantastic and emotional story about brothers and men, and a search for humanity.”

At the outset, months went by and “there wasn’t a director,” remembers de Witt. “I crossed my fingers.” Then, in September 2012, De Luca, Dickey, and Reilly went to the Toronto International Film Festival, where Audiard was presenting Rust and Bone.

Jacques Audiard (born on April 30th, 1952 in Paris) is a French film director and screenwriter. He has won both the César Award for Best Film and the BAFTA Award for Best Film Not in the English Language twice: for The Beat That My Heart Skipped (2005) and for A Prophet (2009). A Prophet also won the Grand Prix at the Cannes Film Festival.

Their interest in the filmmaker predated seeing the new movie. Dickey says, “John and I had seen Read My Lips in the theater over a decade earlier and had been following Jacques’ work ever since. His films are so visceral and immediate.”

Reilly adds, “Jacques hasn’t made as many films as other directors of his generation, but I don’t think I know of any who have as perfect a track record. I knew he would get at the very personal story in this material.”

A meeting was convened, and when Audiard returned home to France there was a copy of the just-published French-language version of the novel waiting for him on his desk.

Two months later, everyone met up again in Los Angeles “and the conversation deepened,” says Dickey. “Trust was built, and we decided to partner up.

“There’s a logic to approaching a foreign director for what can be perceived as American material. They don’t carry cultural baggage, and they approach things with a fresh perspective; think of how Ang Lee made his movies work so well.” Reilly reveals, “Jacques is used to working completely independently, on his own terms. We gave him the property and said, ‘Make it your own.’”

One of Audiard’s first instincts in writing the screenplay with Bidegain was to expand the characters of the Sisters brothers’ quarry, John Morris and Hermann Kermit Warm.

Dickey comments, “The development of these characters moved forward and it became more of a four-hander with two pairs, with the relationships deepening and kept in motion.”

Reilly adds, “In The Sisters Brothers, Warm has higher ideals for the human experience. When people ready for a change come across him, he has a magnetic effect on them; they sense that he knows things can be different in the future. With Morris, it’s that he’s seen a lot of bizarre situations in his work and he meets someone who is very good at listening and sussing things out.”

Emmy Award winner Riz Ahmed (The Night Of), who portrays Warm, believes that the progressive chemist “is a self-taught prodigy who sees the best in others. He’s not just looking to find gold in the landscape; he’s trying to bring out the gold in people. Now, he has told too many interested parties about the chemical formula he’s created to find gold efficiently and so he is being chased — while he’s like the founder of a startup, heading to San Francisco! Jacques is one of my favorite film directors, and when the opportunity to work with him came up I jumped at it. Before we met, he sent me detailed e-mails that were insightful — and also cryptic and mysterious. It was also fascinating doing the research on what science was like at that point in the 1850s.”

The movie took more time to come together while Audiard and Bidegain began and then completed movies they had already committed to directing: respectively, Dheepan and Les Cowboys — with Reilly appearing in the latter for Bidegain.

As work on the script continued de Witt was consulted, including on dialogue exchanges. Dickey comments, “Jacques had the ability to take the book apart and throw the pieces in the air. Then he would pick them up and create something new while keeping a faithful connection to the source material.”

Once the screenplay adaptation was ready, the producing team was rounded out with France’s Why Not Productions — continuing a 15-year relationship with Audiard — and the U.S.’ Annapurna Pictures, and key department heads were recruited well in advance of the shoot. Audiard sought out cinematographer Benoît Debie (who had shot Annapurna’s Spring Breakers) as a new collaborator.

“We had a long prep on The Sisters Brothers,” says Debie. “Jacques and I had so much to discuss about the film, and influences ranging from comics panels to Western movies. “[Production designer] Michel Barthélémy and I talked about what the palette of colors would be, both indoors and outside. Jacques felt it was important to have color, but not too intense.” Barthélémy, who has been the production designer on many of Audiard’s movies, admits,

“I knew about the project years before we would be shooting, and it was so surprising — Jacques doing a Western? Then I read the script and was totally overwhelmed by the documentation that I would need for this period! Step by step, it came together.

“One of the things that the script honed in on was human ingenuity, the ability of man to invent. So it was that I found myself looking for traces of a prototype 19th-century flushing system. We tried to be close to reality, and if there’s a little anachronism it’s about taking some freedom with the existing principles. Sometimes you have to stick to what was there and sometimes you have to break free of too much reconstitution.”