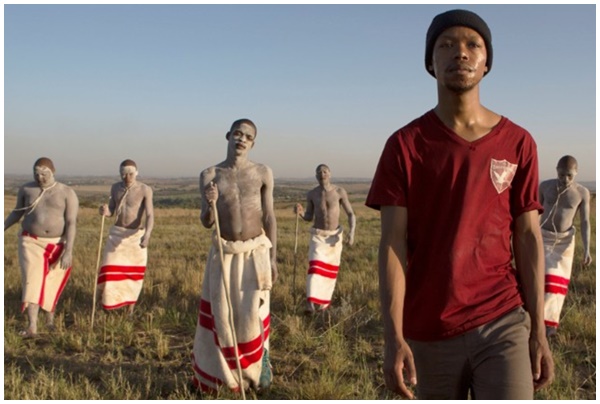 ‘Inxeba’ boldly explores tradition and masculinity, and the clash between age-old rituals and modernity.

Writer-director John Trengove’s first feature film, ‘Inxeba’ (known internationally as ‘The Wound’) is taking the world by storm and was among the 9 films shortlisted for the 90th Academy Awards Foreign Language Film Category.

Director Trengrove orchestrates a dynamic examination of sexuality, masculinity, and the clash between traditional and contemporary African values.  The film has been lauded by critics and is considered “a milestone in South African cinema (Variety), however, the leadership of the Xhosa Nation does not support the film’s exposure of its sacred initiation process (ulwaluko), nor its connection to a gay love story.  The filmmakers have faced protests, calls by the Khosa King to ban the film and even death threats.

“The film’s interrogation of toxic masculinity seemed to resonate deeply with the Academy voters, given everything that is going on in the States at the moment, specifically in the film industry,” said producer Cait Pansegrouw.  “Bringing this film to light has been an incredible experience.  We are elated to have made it this far and are ready to push all the way to the end!”

“This is the best possible news to end off an amazing year,” said director John Trengrove. “For our film to be included in such incredible company is exciting and incredibly affirming. Also, I have so much love for the passionate team of producers and cast who have worked tirelessly this last month to make this moment happen.”

INXEBA is an international co-production between South Africa, Germany, The Netherlands and France, and was produced by Elias Ribeiro and Cait Pansegrouw of Urucu Media, directed by John Trengrove and co-written by Trengrove, Thando Mgqolozana and Malusi Bengu.  It is co-produced by Batana Vundla of Cool Take Pictures with local support from The Department of Trade and Industry, M-Net, Indigenous Film Distribution and the National Film and Video Foundation.

Described by Variety magazine as “a milestone in South African cinema”, the film stars musician and novelist Nakhane Touré as Xolani, a lonely factory worker who joins the men of his community in the mountains of the Eastern Cape to initiate a group of teenage boys into manhood. When Kwanda (Niza Jay Ncoyini), a defiant initiate from the city, discovers his mentor’s secret, Xolani’s entire existence begins to unravel.

“Considering the wins around Inxeba, and the prestige of the AAFCA, which is comprised of African American journalists from across the US, this South African film is in the company of the best in the business,” says Helen Kuun, MD of Indigenous Film Distribution which is distributing the film locally. “The AAFCA recognises content that represents the global community, and encourages an environment where multiple voices are welcomed and championed. This award is a huge win for ‘Inxeba’, and for the filmmakers. We are proud to be representing it in South Africa.”

‘Inxeba’ just completed its Academy Awards® campaign in Los Angeles where key members of the creative team represented the film on the ground. “We held 10 exclusive screenings of the film in and around Hollywood over the course of 4 weeks.” explained producer Cait Pansegrouw. “Each screening was followed by a Q&A and a reception where we were able to discuss the film in detail with Academy® members. The film’s interrogation of toxic masculinity resonated deeply with the voters, given everything that is going on in the States at the moment, specifically in the film industry. We are feeling really hopeful about progressing further in the Oscars® race.”

The Oscars® shortlist for Best Foreign Language Film will be announced in the coming days and ‘Inxeba’ will open nationwide in South Africa on 2 February 2018.

John Trengove is a Johannesburg based writer/director with an MFA in film from New York University.

A Loerie and SAFTA recipient, John is best known for his acclaimed miniseries Hopeville that received the Rose d’Or for best drama and was nominated for an International Emmy. His short film The Goat premiered at Berlinale and Toronto in 2014 and went on to play at over 20 international festivals. John directs fringe theatre in his spare time (Including the cult hit The Epicene Butcher) and heads up the development wing of Urucu Media.

His debut feature film, The Wound, had its world premiere in competition at The Sundance Film Festival and went on to open Panorama at the Berlinale. The film will continue to travel to festivals around the world in 2017.