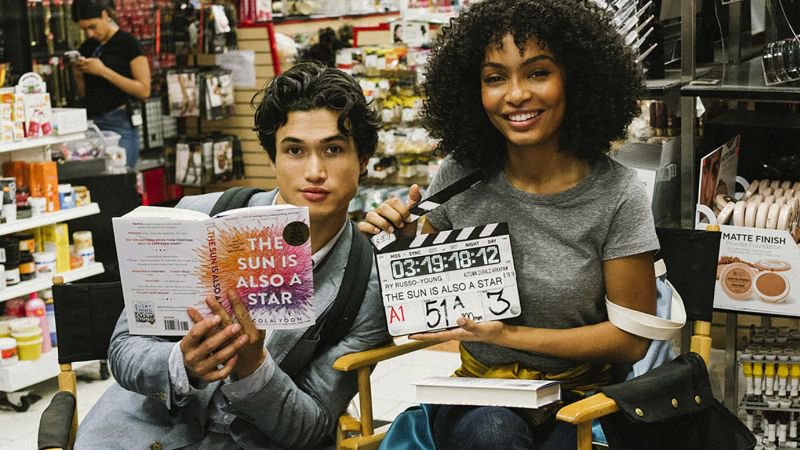 Nicola Yoon, upon whose #1 New York Times bestselling novel The Sun Is Also The Moon the film is based, was inspired by the serendipity of her own relationship in creating the characters—though she and her husband did not meet at such a problematic time as Natasha and Daniel.

“We did not meet whilst I was being deported, or anything like that,” Yoon confirms.  “But I’m Jamaican-American and my husband is Korean-American, like Natasha and Daniel, and we did have a lot of the conversations that I included in the book.  We talked about philosophical things and I was always the one asking, ‘What does it really mean?’ which, I’m sure, was kind of annoying.  And we did go to karaoke a lot,” she smiles.  “My husband is a great singer, and so is Daniel.”

In The Sun Is Also a Star, opposites attract against the backdrop of one of the busiest and most vibrant cities in the world: New York.  And in a city of more than eight million people, what are the odds that anyone will find the one…or that their paths will even cross?

College-bound romantic Daniel Bae and Jamaica-born pragmatist Natasha Kingsley meet—and fall for each other—over one magical day amidst the fervor and flurry of New York City.  Sparks immediately fly between these two strangers, who might never have met had fate not given them a little push.  But will fate be enough to take these teens from star-crossed to lucky in love?  With just hours left on the clock in what looks to be her last day in the U.S., Natasha is fighting against her family’s deportation as fiercely as she’s fighting her budding feelings for Daniel, who is working just as hard to convince her they are destined to be together.

A modern-day story about finding love against all odds, The Sun Is Also a Star explores whether our lives are determined by fate or the random events of the universe.

The Sun Is Also The Moon is directed by Ry Russo-Young (Before I Fall) from a screenplay adaptation by Tracy Oliver (Girls Trip).

In conceiving the pair who are both at a pivotal time of life—nearing the end of high school, preparing for college—Yoon drew from her own experiences as a student at Cornell University, particularly from a series of lectures by noted astronomer Carl Sagan.

“He was so good at taking complex scientific concepts and making you really feel the human impact of these complicated things.  I was also inspired by Big History, a multi-disciplinary method of teaching where, for instance, if you’re going to talk astronomy, you also need to talk poetry—what did poets write about the stars?  All of this was in my mind when thinking about the forces that push Daniel and Natasha together, and the ones the pull them apart.”

Yara Shahidi, who stars as Natasha, observes, “I loved the way Nicola brought such humanity to science, to philosophy, to politics.  I’m from a family of immigrants, and there were so many parallels between Natasha, who fears for her future, and my father’s own journey of coming to the United States at age eight, living with the fear of the immigration laws changing.  It’s pertinent to so many people’s lives, and she combined it with something like first love, which we all go through.  Something that feels so big in the moment, too.”

Just as Natasha faces the end of the proverbial American Dream, she meets Daniel, a boy who is doing his best to fulfill his parents’ version of it…even if it’s not his own.  Charles Melton stars as the conflicted young man who, upon spotting Natasha, is suddenly clear about going after at least one thing he wants.

“Daniel’s whole life has led to this one day in our story,” says Melton.  “His parents expect a lot of him and he feels the weight of that pressure, of making them happy.  They came to America from South Korea to give their kids a better life, but the life they want for Daniel—to be a doctor—is not at all what he wants.  So, he, too, is trapped between two worlds.  But then he sees this girl…”

Screenwriter Tracy Oliver says she was already a fan of the author when she was approached to adapt the book.  “I’m honored to have gotten the opportunity to adapt Nicola Yoon’s beautiful novel about the unlikely love story between two diverse teens, and proud that I could help bring her timely book to life.”

Well known for the success of the 2017 summer hit Girls Trip,
American writer, filmmaker and actor Tracy Oliver established her role and voice as a strong African-American screenwriter and part of the team, which, for the first time, included an all African-American cast as well as producers, writers, and director.

A graduate of Stanford University, she also holds a master’s degree from the prestigious Peter Stark Producing Program at the University of Southern California’s School of Cinematic Arts.

Oliver is the creator, executive producer/showrunner and a director on the upcoming television adaptation of the The First Wives Club for the BET Network, expected to launch in mid-2019.

Oliver has numerous feature film projects in various stages of development, including writing and directing Survive the Night, a music-themed horror thriller, and Rapper’s Delight for producers Stephanie Allain and Paula Wagner.

She co-wrote the comedy Little, and is currently producing a Clueless remake.

Oliver’s additional credits include Barbershop: The Next Cut, co-written with Kenya Barris, and television credits include ABC’s sci-fi romantic comedy series The Neighbors.

She is also known for writing, producing, and acting in the hit comedic web series “The Misadventures of Awkward Black Girl.” A graduate of Stanford University, she also holds a master’s degree from the prestigious Peter Stark Producing Program at the University of Southern California’s School of Cinematic Arts.

Russo-Young offers, “The key things that seemed important to Nicola and myself to maintain from book to screen were a sense of cultural authenticity for both main characters, as well as the love story.  Then, in the execution, to get everything right in terms of the chemistry between Natasha and Daniel…well, we couldn’t have gotten any luckier than casting Yara and Charles.

“When I approach any project, I look for what makes it different, or special—why we need to tell the story now,” says director Ry Russo-Young.  “With this story, I felt that urgency, that ticking clock.  I also grew up in New York City, roamed those streets, and fell in love there, so it was personal to me.  And to tell an immigrant love story that plays out in one of the most diverse cities in the world was perhaps the most exciting to me, creatively.”

The film pits the law of attraction against a U.S. deportation law that will, in just 24 hours, put the character of Natasha and her entire family on a plane to Jamaica, away from everything she knows and loves, everything she considers home.

States producer Leslie Morgenstein, “‘The Sun Is Also a Star’ has the timeless theme of first love, but is also very topical, weaving in the subject of immigration and deportation with what it’s like to be young in America.  Ry brought her incredible passion to this story and was also excited to bring New York alive in a way that would be new for audiences.”

Producer Elysa Koplovitz Dutton adds, “Ry’s vision for turning this timely modern story into a film with classic appeal was something that immediately appealed to us.  Immigration is one of the most relevant topics of our time and Nicola’s ability to create the story of a budding relationship within the context of this powerful and emotional issue is urgent and very real.”

“‘Sun’ is a story told in the language of the young, romantic and staunchly metropolitan perspectives of our two heroes,” says Russo-Young.  “The music we chose for the film reflects their experience, while finding a modern take on what a long song can be.”

The filmmakers hope the themes in the film will also inspire audiences to ask themselves what love looks like to them.  “In this story, falling in love helps these characters realize their true selves,” offers Russo-Young.

“That’s why stories like ‘The Sun Is Also a Star,’ about young adults finding their own voice in this world, are so resonant; love is a great impetus for speaking up and speaking out.  Amidst the noise, the hustle and bustle, and the bureaucracy of this big, crazy world, no matter what we do or where we go, there’s a kind of clarity that appears when you find someone you love.”