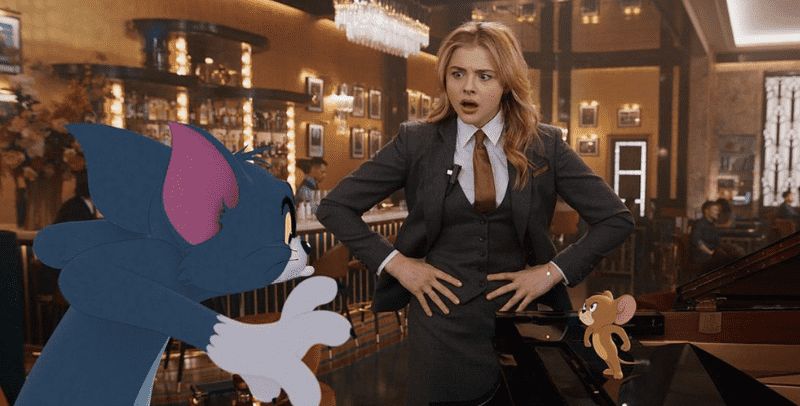 Whether you cheer for Tom or Jerry, chances are that in the 80 years the duo has been entertaining audiences of all ages, you’ve picked a side. Director Tim Story was eager to take on the classic dueling duo Tom and Jerry for a modern movie audience.

Story, who up till now has directed live-action-only feature films, says, “I was excited to bring this to the screen and to take them inside the ‘real’ world, and to see them run around and fight with one another in a big city like New York.

“I grew up on these cartoons,” he continues, “so I wanted to make sure we stayed true to them.  We don’t hold back on the action; audiences will hear the sound effects they’re used to as Tom and Jerry chase after each other and destroy everything in their path.  We made sure they fight and fight often,” he laughs.  The twist, he reveals, is that “at some point, they have to come together, and work together, to save the day.”

“When it comes to humor, Tom and Jerry—with their slapstick, over-the-top physical comedy—transcend time,” he states.

“What we’ve done with this film is to take this historical pair as you would normally see them in, say, a house, but put them on a much bigger canvas.  Now, they’re inside a huge hotel and in the presence of actual humans.  Not necessarily talking with them, of course, but definitely interacting with them.”

And causing all kinds of mayhem.

“We stayed true to the original characters,” Story assures, “so basically they are running around, beating each other up…all the things you’re used to seeing Tom and Jerry do.  The action is all in keeping with these characters as we’ve always known them.”

As fans have known them but, as producer Chris DeFaria notes, “Audiences will see Tom and Jerry in a way I don’t think anybody’s ever seen before: a hybrid film with the classic animation that allows us to bring all the crazy stunts and gags people associate with the original cartoons into a live-action, real-world environment.”

“They’re funny,” DeFaria states, “and funny counts, especially when it comes to cartoons.  Slapstick humor has been around forever because it plays really well for the whole family—anybody can enjoy it.  And Tom and Jerry are really cute; their designs were really an achievement in animation—the purity of form, how expressive they can be.  There’s also really clear messaging in their contention, one being that might isn’t always right.  Sometimes clever is better than just being stronger.”

“Tom and Jerry are deep, committed rivals,” DeFaria adds, “but like brothers and sisters, they’re both the most important people in each other’s lives.  Though I promise they would never admit it!”

“If you’re going to put Tom and Jerry into a place where they don’t belong, you have a couple of choices,” says DeFaria.  “An airplane. Maybe a cruise ship.  We chose a luxury five-star hotel in New York, for no other reason than there’s just a lot of stuff you can break in a really fancy hotel, and a lot of people there who don’t want to see a mouse or a cat, much less the two of them chasing each other through the lobby.”

The screenplay was crafted by Kevin Costello, based on characters created by William Hanna and Joseph Barbera.

Costello who felt responsible to live up to the legends, says, “Working on ‘Tom and Jerry’ was a hugely exciting and intimidating experience.  There’s a reason these characters are still so popular, 81 years later, all over the world, and I wanted to be extremely careful to honor that. Tom and Jerry had to be themselves—look like themselves, not talk like themselves and, obviously, engage in absurd, gleeful, over-the-top cartoon violence.  I had so much fun going through the old shorts, trying to break everything down on a character level, and finding ways to recontextualize classic elements in a way that felt nostalgic but new.”

While making a film in any medium—live-action or animated—presents its own set of challenges, Story says that serving fans of all ages from all around the world fueled the filmmakers’ decision to do both, to “stay true to the original look and feel of Tom and Jerry—keeping them and a whole collection of their usual ‘costars’ authentic to their 2D world, but at the same time reimagining them to fit into our three-dimensional one.  I mean, who wouldn’t want to hang out with Tom and Jerry in real life?”

Kevin Costello (Screenwriter) is a 2007 graduate of the University of Oklahoma’s Gaylord College of Journalism.

After participating in the Emerging Writers Program at 20th Century Fox in 2013, he co-wrote the film “Brigsby Bear” with “Saturday Night Live” member Kyle Mooney.

Produced by The Lonely Island and Lord & Miller, “Brigsby Bear” premiered in Dramatic Competition at the 2017 Sundance Film Festival, where it was purchased by Sony Picture Classics.  The film went on to play at the 2017 Cannes Film Festival as part of Critics Week.

Born in Los Angeles, California, Story began directing at the age of 12, making silent films with an 8mm camera he inherited from his older brother.

After graduation, Story attended the University of Southern California (USC), where he studied Cinema Production at the School for Cinema Arts.  He honed his storytelling skills in USC’s prestigious film school while his twin sister, Tamryn, became a star on the school’s women’s basketball team.  He then returned to the music industry, this time by directing music videos.  His cinematic style was showcased in videos of artists who represented diverse music genres, ranging from R&B to pop, including N-Sync, K-Ci & JoJo, R. Kelly, Tyrese and India Arie.

During this same time period, he and his wife, Vicky, founded The Story Company, an entertainment production house, where Story financed, produced, wrote, edited and directed two feature-length independent films: “One Of Us Tripped”(1996 winner of the Black Filmmaker’s Hall of Fame Film Festival) and “The Firing Squad” (1998).

In 2002, Story made his studio feature film directorial debut with the smash hit comedy “Barbershop,” followed by “Taxi,” and the epic superhero adventure “Fantastic Four,” based on the popular Marvel comic.

He also helmed the 2007 sequel, “Fantastic 4: Rise of the Silver Surfer,” which debuted at number one and went on to earn more than $289 million.

Story then directed Oscar winner Forest Whittaker in the 2009 independent film “Hurricane Season,” the true story of a high school basketball coach and the team of displaced students that he led to the New Orleans State High School Basketball Championship in the wake of Hurricane Katrina.

In addition to his directing work, Story produced 2008 the urban comedy “First Sunday.”  For television, he served as an executive producer on the FOX television series “Standoff”; the Showtime series “White Famous,” starring Jay Pharoah; and, most recently, the Netflix series “Prince of Peoria.”

The Academy of Motion Picture Arts & Sciences invited Story to join its Director’s branch in 2013, making Story one of the few African-American directors in the historic organization.