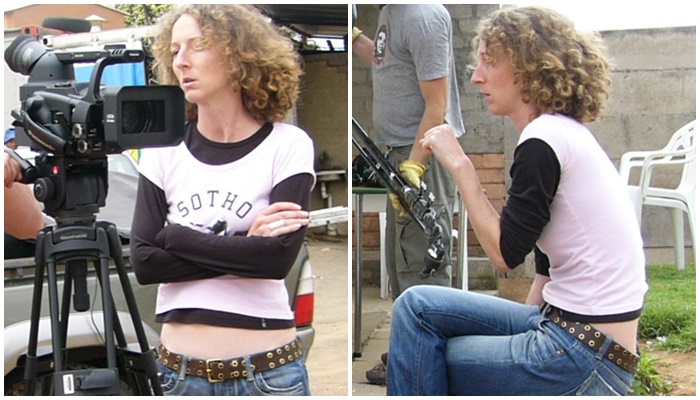 The Adventures Of Supermama takes flight after 15 years of development, a dream project of Writing Studio graduate Karen Van Schalkwyk, who first introduced South Africa’s first Black superhero in a short film in 2006, followed by eight years crafting the screenplay and developing the film.

After graduating from university with a BA in Drama and English, Karen began her career in the industry working as a PA on film sets. She then worked as a film journalist for the leading trade publication Screen Africa for a number of years before branching out as a freelancer and writing for M&G, Fairlady, Gauteng Film Commission and Screen Africa.

As a leading film journalist in the South African industry, her desire to be a filmmaker was fueled by attending various film festivals around the world, including Cannes Film Festival, Mipcom, MipTV, IBC and The Sithengi Film Festivals and Apollo Film Festival in South Africa.

While she was working as a journalist, Karen pursued her desire to become a screenwriter, and attended The Writing Studio’s workshop in 2002 under the tutelage of Daniel Dercksen, where a lifelong friendship was formed.

As she fervently honed her craft as a screenwriter she came to realise that she wanted to direct films, specifically her own work.

In 2003 she completed her first screenplay, Ren which she submitted the Binger Institute in Amsterdam. She joined writers from all over the world for a five-month screenwriting course; and in 2005 she studied directing and filmmaking at the New York Film Academy and graduated with her short film, Hatrick.

Supermama was screened at the African Film Trinidad & Tobago film festival in official selection in May 2019. The film was nominated for Best Comedy at the African Movie Academy Awards (AMAA) in 2018 and will be released this year through Nu Metro and Century Cinemax on 14 June 2019

Dreams that might seem impossible can easily result in failure when writers give up on a project? The success of bringing your story to the big screen shows that nothing is impossible… what inspired your perseverance?

The complete conviction that I wanted it accomplished. Better to strive and fail and learn than not to go for it. There were and are still so many obstacles, but the funny thing about an obstacle is that you will either give up or get up. There are challenges and I like to be challenged. This road is not for everyone and there is also nothing wrong with deciding not to do something. It’s a personal choice and that is how one should see it. We have been conditioned to believing that we need to conquer all, but this is just not the case. I think the best is to live by one’s convictions.

Do you think it helps to get a short film out during the process of getting your feature film realised?

Yes and no. A short film will help as it show cases what you can do or what your story is about, but as all writers and directors will say, you are only as good as your last work. I also think other things help you along the way, things far more important than just one’s own work or ambition. To see a film to its conclusion requires conviction but also the support of people. So this is where I say thank you to all those who know of whom I speak.

How difficult was the process from page to screen? The Obstacles, etc

There was a process which developed in the creation of the script. Once that had been done, the transition was simplified by what had gone before.  One has to be methodical and work out how best to translate the written ‘story’ into reality. We were fortunate in that Supermama is a very visual script and I think that comes from wanting to direct one’s own material. Whenever I write a script, I always have in mind that I will direct the material, so maybe this makes the process from page to screen more fluid. I was very fortunate with Supermama to have Damon Berry and Ben Tjibe as my writing partners. One also gets to work with talented people on set, which makes going from page to screen more manageable.

The most challengingobstacle occurs when the story moves into production.  It becomes a living thing. By this I mean one has to deal with location changes, cast and crew challenges, the weather, and all of this will ultimately affect the story. One has to be pragmatic, because changes are forced on one by changed circumstance.

What advice do you have for screenwriters who want to get their work produced? 5 Tips

Your views on how the SA Film Industry has changed since working on your film?

There are more films coming out. Streaming/online/Netflix etc has definitely changed the perception of cinema (and TV). When I began this project, my aim was always to make a film for cinema – that was my vision. Cinema has become less important in terms of screenings and revenue recoupment and even artistic vision.  I maintain that films are films and if you want to make films for cinema, then you should set about doing so.  We are self-distributing Supermama because Ster KineKor, Indigenous Films etc did not want to take a risk and put it in cinemas. Our attitude was to say ‘okay’ then we will do it ourselves. I am just happy we stuck to our guns and I stuck to my vision.

Streaming is definitely creating more opportunity to get the work out there. South African stories and films will reach a global audience and this great. More international deals are being made. We signed a deal with Trace Distribution, a French distribution company. It has been said that directors should be dictators. Don’t let others start to dictate the terms.

How does what you see on screen compare to what you had in mind?

There are of course changes and so there should be. This does not mean one’s vision is compromised. For instance, I had a vision in my mind’s eye of what Kilber’s mansion would look like, or let’s say, what it all would look like. But when you have to pay top dollar for fancy houses and your budget only allows for a certain amount, then you better be flexible. Changes occur when life happens and budgets happen, and this is a great thing. Actors also bring their own ideas and personalities, so too does the crew. One has to be flexible and allow for interpretation, but also be firm and uncompromising. I always say it is a fine balance. When I look at the work, of course there are things one would have done differently, but over-all I am happy with the end product.

What were the most important aspects you wanted to convey as the director?

To remain true to the story and vision. I think because I co-wrote it with Damon and Ben and we spent so many months and months and months, getting the story to where we wanted it to be, it would have been a travesty to betray what we had worked so hard to accomplish. One has a responsibility to remain on point for the writers, cast and crew and also for the investors, there is no time to waste so it has to be clear that what is on the page is the way forward.

How was it to direct your first feature film?

Difficult and thrilling. I really love being on set and working with the actors and crew. I also like the physicality of directing as you not stuck behind a desk. Writing for me is different and while very rewarding, it is hard to remain at a desk. I consider myself to be a writer/ director and this gives me a good understanding of the crafts of both. With regards to directing Supermama, I prepared. I read a lot of books like the 5 C of Cinematography, Judith Weston, Directing Actors and Film Director’s Intuition also a great book on editing on Walter Murch and many more, as well as watching a variety of films that inspire me – and some that don’t.  I also compiled many notes on character, theme, blocking and general script breakdown and just contemplated a lot of aspects. One of my highs is working with actors. If you give them enough direction but also space to breath, it allows for creativity. Creativity is key and allows things to flow. We had a lot of fun doing this film and lots of laughs.

What makes The Adventures Of Supermama unique and how do you want an audience to react to the film?

When I developed the concept and came up with the idea of a black woman superhero, in 2006, I think it was pretty unique at the time. The film is not a typical Hollywood style film and is not a copy of what is expected of a film to be or look like. It does not have fancy camera moves, model like actors etc. but it is real. There are of course flaws due to budget and time constraints, and some things that were not accounted for, but overall we have created a film that is true to life – even the more unrealistic scenes. It is both an intimate and big story that deals with many different aspects. I cannot say how an audience will react to the film, but of course I hope they like it.