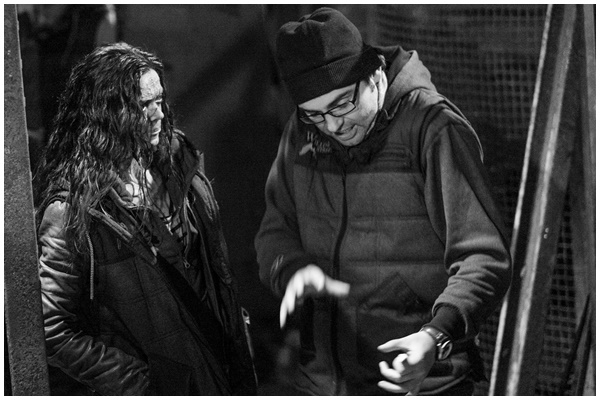 “I wanted to do a kidnapping ﬁlm, but I wanted to flip it on its head. I didn’t want the audience to know what they were getting in to..”

Alastair Orr is an independent ﬁlmmaker based in Johannesburg, South Africa that started writing and directing theatre pieces in high school and was soon working behind the scenes on local university plays while ﬁnishing up his secondary education.
Alastair moved to Johannesburg to pursue a career in ﬁlmmaking and worked his way into post production, cutting countless music videos, TV shows and commercials. Growing tired of always working on other people’s projects, Alastair ﬁnanced his ﬁrst ﬁlm, The Unforgiving, in 2010. Initially meant to be a trial run for bigger work, The Unforgiving got snapped up for distribution in Japan, The United Kingdom, France and a theatrical run in South Africa, despite it’s minuscule budget of $5000.
Alastair directed Indigenous for Kilburn Media (Sin City 2, Machete Kills) in Panama in the beginning of 2013; it was was selected for the 2014 Tribeca ﬁlm festival. eOne distributed the ﬁlm in the US and XYZ sold the ﬁlm Internationally.

In The House On Willow Street  a roguish kidnapper and 3 accomplices, abducts a young heiress. When they have her locked up in their inescapable lair, they discover she is possessed by a terrifying demon, which plunges them into a nightmarish experience of supernatural horror.

Tell me about A House On Willow Street?  Where did the inspiration come from?

I always wanted to make a bat shit crazy film where you never know where it’s going to go.

Back in the late 80s and 90s you’d go and find a film at the VHS store knowing very little about it, I wanted to create that same surprise factor with this flick.

Also, coming from my last film Indigenous, I wanted to create a world where there was more than just one monster lurking in the shadows, so I really just went wild with the types of monsters I wanted to show.

Tell me about working with novelist Jonathan Jordaan to flesh out the script?

Jonathan has a better understanding of story than I do, he knows how to break rules better and his imagination is wild. We worked together on my no-budget film Rancid in 2011 and it was great working with him on a bigger canvas.

“It has to be relentless, lots of ghosts, not one monster that keeps popping up,” says Jonathan Jordaan, a novelist from Johannesburg, who was brought in to flesh out the script. “We knew upfront we weren’t going to have all the bells and whistles of a Hollywood production – we were going to have to be clever with how we did things.”

A gonzo horror film made by a group of really passionate people. The kind of film that MNET would put on at 2 in the morning and you would have to set you VHS recorder to get it.

Was it a difficult process bringing it to the big screen? Tell me about this

Making films is tough, everyone reading this site knows that. We didn’t make it easier on ourselves. We shot for 4 weeks at night, in the middle of winter, with a ton of practical effects.

There’s always this misconception that horror films are like a bottom feeder sub-genre and they don’t require skill to make them, but the truth is it’s insanely demanding shooting these things. You have actors in makeup for over four hours so you’re shooting half the scene with the actors that are available and then the reverse when the Demon is ready, completely separately.

The special effects on set take time to set up and rehearse, so you’re constantly working against the clock. Our stunt team was great but its tough to rig flying rigs in dilapidated buildings at night, or crashing a van (safely) in the dark. We also shot with a lot of mist, so we were hard on ourselves with getting the right visual tone, and you know once you start something you have to commit to it, so every night we had to have the mist going once we had made that call.

Jaco Snyman, fresh off being the lead prosthetic designer on Mad Max: Fury Road jumped at the opportunity to make a horror ﬁlm in his home country. “We always watch these kinds of ﬁlm but never get the opportunity to make them,” says Snyman, “I really got to go crazy on this one, bring my nightmares to life.” Snyman operates out of Dreamsmith Studios just outside of Johannesburg. His team utilizes a homemade 3d scanner, where they sit the actors in a chair and rotate a contraption of 20 DSLR cameras around them. Once they have a 3d model of the actor’s entire body, they start to design the prosthetics.

At the end of the day we’ve sold this thing around the world, and we’ve packaged it as an American film (accents and everything) so I think we achieved our goal. We’ve managed to really get this film out there (it sold out at Berlin 2016 in 3 hours) so we’re really proud of what we put out there and the foot print around the world able to see it.

Like all of his ﬁlms, Orr edits them himself. “The biggest advantage to doing the editing myself is that I know what to shoot on set to make it work in post. There’s no messing around with superfluous shots, we were shooting in harsh conditions that were very taxing on the cast and crew, I knew exactly what I wanted so there was no re-doing stuff because we had hard rive space to burn.” Editing lasted 3 months where it was handed over to Johannesburg based VFX company Loco who handled over 100 VFX shots for the ﬁlm. “We built 3d tongues, mouth extensions, hovering tools and ﬁre enhancements,” says George Webster, VFX supervisor for the ﬁlm. This is deﬁnitely different to the normal stuff we do!” Webster says, “We knew the stuff was working when Alastair would gag in the viewings.” Webster says as he laughs.

How do you see the future for screenwriters and filmmakers in South Africa?

I think the future looks good if you’re willing to work hard at it. It’s getting harder and harder to make films and get finance and then sell them, so you’ve really got to want it more than you want to breathe. We have to find innovative ways to tell our stories, that can be done on a small budget.

Any advice you have for aspirant screenwriters who would like to get their stories made?

Find a director or producer and work with them on something that is achievable and realistic. So many people spend years trying to sell their passion project that nobody wants to make or cant afford to make. Get in the game by collaborating and work your way to your dream project.

Are you a fan of the horror genre? Any films that inspired Willow Street

Having made 3 previous horror films I’d be a sucker for punishment if I didn’t. I think it’s a genre that allows you to play with a lot of neat toys (narratively and technically) that I just get a kick out of. It’s challenging to keep an audience on the edge of their seat the whole time

What do you hope audiences will get from watching A House On Willow Street?