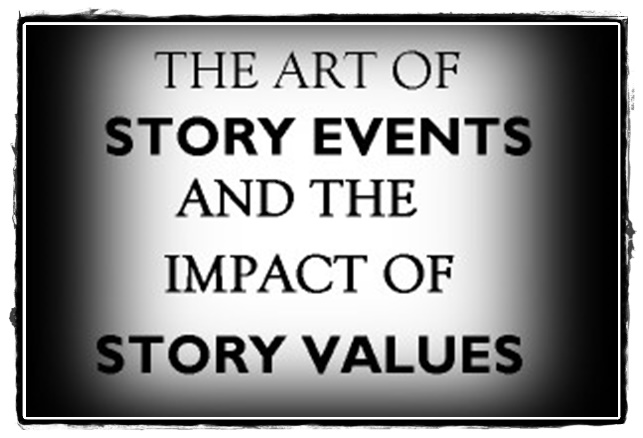 We all know when it happens, that magical moment when you watch a film, a stageplay or television, or read a book, and something happens that takes hold of you emotionally and completely holds you in its power for its duration – this could be one story event, or in the case of a series, a culmination of spellbinding story events that captivate you emotionally and personally.

This moment doesn’t happen by accident, it is a moment skilfully created and crafted by the writer.

A story event, also referred to as a scene, is an event out of character’s life that can evolve into a sequence of events and become whatever the writer wants it to be, and is never dull, lifeless moments of where nothing happens.

The smallest form of structure in writing is known as a beat. It is the heartbeat of a story event a pulse that is caused by an exchange of action/reaction in character behaviour; the changing patterns of human behaviour. It is also known as action points; a dramatic event that causes action, that cause an interaction and results in conflicted interaction (dramatic or comedic).

Fast paced dialogue will convey the frenetic energy of the characters; long expositional power speeches (monologues) will focus the attention on your character expressing his or her point of view and include beats to pace the tempo.

What makes a perfect story event, an ideal scenario that draws you into its magical realm?

In his bible for screenwriters, Story, screenwriting guru Robert Mc Kee states that: ‘’A film isn’t just moments of conflict or activity, personally or emotionally, witty talk or symbols. What the writer seeks are events, for an event contains all off the above and more.”

You must know your purpose states McKee

‘’A Story Event creates a meaningful change in the life situation of a character that is expressed and experienced in terms of value, and achieved through conflict.’’

To make change meaningful you must express it, and the audience must react to it, in terms of value.

’Story Values refers to the broadest sense of an idea. Values are the soul of storytelling. Ultimately our is the art of expressing to the world a perception of values.

Story Values are the universal qualities of human experience that may shift from positive to negative, or negative to positive, from one moment to the next.”

For a typical film, the screenwriter will choose forty to sixty Story Events. A novelist may want more than sixty, a playwright rarely as many as forty.

‘’A Scene is an action through conflict in more or less continuous time and space that turns the value charged condition of a character’s life at least one value with a degree of perceptible significance.’’

So, how do you craft a perfect story event?

Although this process of constructing Story Events might seem complicated, it’s an incredibly simplistic and instinctive; a stimulating and inspirational; creative process that empowers writers to fully own their stories, what happens in the story, how the story happens, who the story happens to, and its meaningful and rewarding thematic purpose.

Just think of Story Events in films, theatre, television and books that have touched you deeply, personally and emotionally, and on closer inspection, you will see how skilfully the writer has crafted the story to give its audience and readers a ‘perfect’ and life changing experience that will last a lifetime.

TIP:  The Card Outline is an organic process and works best if you are using a pencil. It is a creative, right-brain activity that fosters constant change; if one thing changes, it affects everything else. It is also a process that allows you to strengthen your story by exploring the inner life of your story.

STORY: SUBSTANCE, STRUCTURE, STYLE AND THE PRINCIPLES OF SCREENWRITING BY Robert McKee: Robert McKee’s screenwriting workshops have earned him an international reputation for inspiring novices, refining works in progress and putting major screenwriting careers back on track. Quincy Jones, Diane Keaton, Gloria Steinem, Julia Roberts, John Cleese and David Bowie are just a few of his celebrity alumni. Writers, producers, development executives and agents all flock to his lecture series, praising it as a mesmerizing and intense learning experience.  Add to your collection