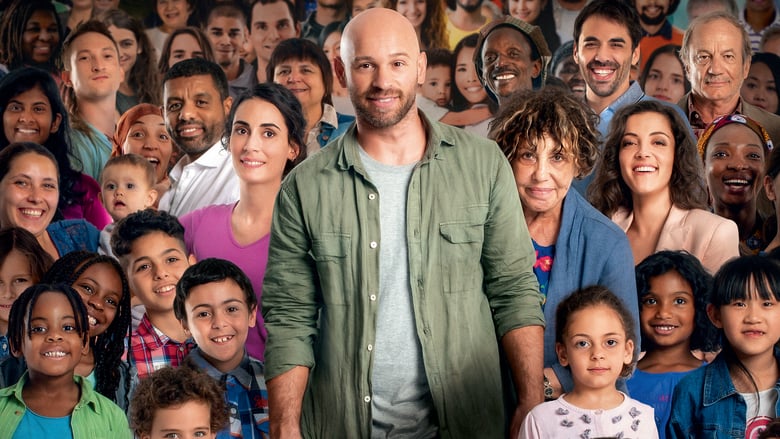 The French film Adopt A Daddy is a humorous approach to the hardships immigrant children go through in France.

Written by director Xavier De Choudens, along with Charly Delwart, the story focuses on Damien (Franck Gastambide) and his sister Melanie (Camille Lellouche) who had a happy but often disrupted childhood due to the incessant protesting of their almost “professional” activist parents.

Following the untimely death of their mother, this super-committed family’s activist spirit fizzled out. Twenty years later, Damien, now a primary school teacher, is forced to follow in his parents’ footsteps in order to save a student (Jessim Kas) who is being deported along with his mother, Salma (Melisa Sözen). Damien convinces his sister, now a formidable business lawyer, and his best friend, Rudy (Gringe), to join him in the fight. Together, they will cross the picket line in order to save Damien’s student and many others…

The film is screened in French with English subtitles.

Q & A with Xavier De Choudens

How did this project come about? Is it based on a true story?

I was reading the paper and there was a story about man who was posing as the father of refugee children to get them French citizenship. The first part of the article is really what inspired the movie and I thought of developing it into a kind of modern-day Robin Hood! But the article ended differently. The man turned out to be a fraud, who wanted money for what he was doing. But it was a start. I asked myself, what if he’d helped the kids just to do the right thing and not for gain? I asked myself what I’d do in his place. It’s an interesting issue, but I didn’t want to create a chastising movie or make any grand statements. I just wanted to something relatable – a comedy with some depth. Sometimes humor can touch us in unexpected ways.

How did you research the topic?

I got in touch with a bunch of civil society organizations and social workers, visited shelters, talked to immigration lawyers, but most of all I spoke to mothers who were facing deportation. I approached the project the way I would a documentary, although I knew I’d be turning it into a comedic feature. It was important for me to make an honest piece and refrain from preaching.

Damien’s parents are not just social activists, they’re almost militant in their approach.

Yes, Damien’s parents are pretty extreme. And if you think about it, Damien is too. Just like his parents, he gives his all for a cause he believes in. That’s really what characterizes him. I was also fascinated with the idea of creating a certain idealism or naivete within the character. Damien and his parents don’t just talk about doing something, they really act with pure motives. In order to achieve his goal, however, Damien also has to deal with sister, from whom he’s become somewhat estranged over the years. He’s got to mobilize her and his father and reinvigorate them both with the fighting spirit of his mom!

That’s right. So, over the years, Melanie has fallen into the trap of defending the powerful and become somewhat of a corporate lawyer. But Damien comes back to remind her of her passion for social justice.

Yes. Melanie is well-grounded that is a strength. She is a strong character. And in her capacity as a lawyer, she is constantly referring to and upholding the rule of law. Damien, however, is totally different and messy. I loved the contrast and wanted Melanie to be touched and challenged by her brother without losing sight of her commitment to lawfulness. She helps Damien in court by appealing to a fundamental French value: Fraternity or brotherhood. This is what connects her to her brother but also characterizes the ideals of France.

What other movies is this one similar too?

The Full Monty or Starbuck or a number of French films like, Samba, Patients, Le Nom Des Gens…There are many, but at the end of the day, this is its own story. We are often forced to reference other movies so we have an idea of what a project might look and feel like. But for me the only reason I reference the above is to convey the idea of balancing humor with drama. Other than that, it’s a unique project like any other.

With the movie you essentially also ask the question what it means to be a hero?

Yes, I simply ask the question. I don’t really have a specific answer. Other than, perhaps to be a father that cares for all children, not just his own. That’s a start, I guess.

In France there is often talk of the idea of ‘solidarity’ – has solidarity become a crime?

You know I’ve been hearing this a lot in French or European media lately and it’s absurd! I even saw it framed as ‘the crime of solidarity’ – When I read that, I wasn’t sure what to think. Am I missing something? How can a virtue become a crime? No. Solidarity and fraternity, these are fundamental values of our democratic societies and we have to live by them. We have to help people.

Did you write the character of Damien for the actor, Franck Gastambide?

When I was writing the script, I actually did think of Franck, but I wasn’t sure he would accept the role. Having him in mind, however, really helped me develop the character. I didn’t know Franck personally, but I had seen him in a few films, and I was taken by his sincerity. His sincerity and his physique! He’s just as strong and big as he is sensitive and gentle. This is a fascinating combination. I was sure the role would be an exciting challenge for him.

Camille Lellouche surprises us as she usually plays the crazy character, and here she is the voice of reason.

Yes. In Camille one discovers a truly creative and hilarious human, full of energy and very hardworking. It was my job, however, to contain all that energy and channel it into something unexpected. It was interesting to mold her into the opposite of what we’re used to seeing from her. At the end, I think there is a lot of Camille feeding into Melanie and I’m very happy with the result.

How did you find Melisa Sözen? And how did you direct her, knowing she didn’t speak French?

I had seen her in the film, Le Bureau Des Legendes, and was taken by her grace. As soon as we met and she started reading for me, I knew she was the right person for the role. The language barrier war an interesting challenge. Meilsa doesn’t speak French nor Arabic, though she plays a Syrian mom. She speaks Turkish. This challenge enabled us to embue her character with credibility by focusing on the basics: how to convey emotion without relying on language. Melisa is compassionate and sensitive, but she’s also got a lot of gumption.

All supporting actors and actresses were great – for example, Liliane Rovère.

For Liliane it was an important film with an important message. She is an activist herself and so I loved consulting her all the time. She brings a dimension of honesty and immediacy to the picture and her energy could be felt throughout the shoot. She supported me not only by giving a great performance, but also by engaging and being a friend.

How did you choose the young actor playing Bahzad?

When Jessim came to read for me, he was a whole lot more subtle and understated than any of the other kids. This is exactly what I wanted. I knew the film could only be successful, if the young boy could deliver a credible performance. Throughout the shoot I spoke to him as though he were any other actor, as an adult really. And he responded well to that.

Music also play an important role in the film

Yes, in fact, I can’t write without listening to music. For the score I wanted something that moves the soul and inspires. I also wanted something that complements and accompanies the journey of Salma. Sébastien Schuller composed a clean, subtle and gorgeous score, which enriches Salma’s journey.