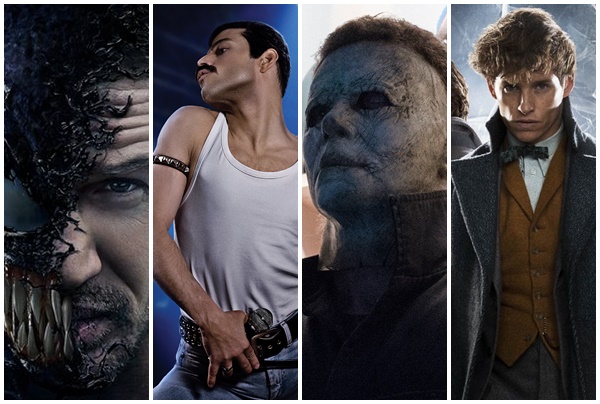 12 Steps To Writing The Perfect Screenplay: The Write Journey is an interactive course for writers who would like to write a screenplay for feature film or television. Read more

Behind The Scenes Features, Interviews & Trailers of 2018 Film Releases /

AQUAMAN From Warner Bros. Pictures and director James Wan comes an action-packed adventure that spans the vast, visually breath-taking underwater world of the seven seas, “Aquaman,” starring Jason Momoa in the title role.  The film reveals the origin story of half-human, half-Atlantean Arthur Curry and takes him on the journey of his lifetime—one that will not only force him to face who he really is, but to discover if he is worthy of who he was born to be…a king. The film also stars Amber Heard (Justice League, Magic Mike XXL) as Mera, a fierce warrior and Aquaman’s ally throughout his journey; Oscar nominee Willem Dafoe (Platoon, Spider-Man 2) as Vulko, council to the Atlantean throne; Patrick Wilson (The Conjuring films, Watchmen) as Orm/Ocean Master, the present King of Atlantis; Dolph Lundgren (“The Expendables” films) as Nereus, King of the Atlantean tribe Xebel; Yahya Abdul-Mateen II (Netflix’s “The Get Down”) as the vengeful Black Manta; and Oscar winner Nicole Kidman (“The Hours,” “Lion”) as Arthur’s mom, Atlanna; as well as Ludi Lin (“Power Rangers”) as Captain Murk, Atlantean Commando; and Temuera Morrison (“Star Wars: Episode II – Attack of the Clones,” “Green Lantern”) as Arthur’s dad, Tom Curry. Directed by James Wan, with a screenplay by David Leslie Johnson-McGoldrick and Will Beall, from a story by Wan, Beall, and Geoff Johns. Read more/ Trailer / Showing from 21 December

BUMBLEBEE On the run in the year 1987, Bumblebee finds refuge in a junkyard in a small Californian beach town. Charlie (Hailee Steinfeld), on the cusp of turning 18 and trying to find her place in the world, discovers Bumblebee, battle-scarred and broken. When Charlie revives him, she quickly learns this is no ordinary, yellow VW bug. Directed by Travis Knight from a screenplay by Christina Hodson. Starring Hailee Steinfeld, Pamela Adlon, John Cena, Stephen Schneider, Jorge Lendeborg Jr., Jason Ian Drucker, Kenneth Choi, Ricardo Hoyos, Abby Quinn, Rachel Crow, Grace Dzienny. It is the sixth installment of the live-action Transformers film series and a prequel to 2007’s Transformers. Read more / Trailer / Showing from 21 December

COLLETTE After marrying a successful Parisian writer known commonly as “Willy” (Dominic West), Sidonie-Gabrielle Colette (Keira Knightley) is transplanted from her childhood home in rural France to the intellectual and artistic splendor of Paris. Soon after, Willy convinces Colette to ghostwrite for him. She pens a semi-autobiographical novel about a witty and brazen country girl named Claudine, sparking a bestseller and a cultural sensation. After its success, Colette and Willy become the talk of Paris and their adventures inspire additional Claudine novels. Colette’s fight over creative ownership and gender roles drives her to overcome societal constraints, revolutionizing literature, fashion and sexual expression. Directed by Wash Westmoreland and written by Wash Westmoreland, Richard Glatzer, Rebecca Lenkiewicz. Read more / Trailer / Showing from 7 December

ELLIOT:  THE LITTLEST REINDEER A good-hearted miniature horse (voice of Josh Hutcherson) dreams of pulling Santa’s sleigh. He gets the chance to audition when a reindeer retires, but troubles on his farm force him to choose between saving Christmas or helping his best friends. Jennifer Westcott wrote and directed this animated film, which also features the voices of Samantha Bee, Martin Short, John Cleese, Morena Baccarin, and Jeff Dunham. Read more / Trailer / Showing from 14 December

THE GRINCH For their eighth fully animated feature, Illumination and Universal Pictures present The Grinch, based on Dr. Seuss’ beloved holiday classic.  The Grinch tells the story of a cynical grump who goes on a mission to steal Christmas, only to have his heart changed by a young girl’s generous holiday spirit.  The Grinch and his loyal dog, Max, live a solitary existence inside a cave on Mount Crumpet. His main source of aggravation comes during Christmastime when his neighbors in Whoville celebrate the holidays with a bang. When the Whos decide to make Christmas bigger and brighter, the disgruntled Grinch realizes there is one way to gain peace and quiet. With help from Max, the green grump hatches a scheme to pose as Santa Claus, steal Christmas and silence the Whos’ holiday cheer once and for all. Based on the 1957 Dr. Seuss story How the Grinch Stole Christmas!, it is the third screen adaptation of the story, following the 1966 TV special of the same name and the 2000 live-action feature-length also of the same name. It is directed by Yarrow Cheney and Scott Mosier, written by Michael LeSieur and Tommy Swerdlow. Feature: A New Adaptation Of Dr. Seuss Treasured Classic For A New Generation /  Trailer / Showing from 7 December

INSTANT FAMILY Hoping to start a family, Pete and Ellie (Mark Wahlberg, Rose Byrne) turn to the foster care system to make their dream come true. The couple soon learn the joys and frustrations of parenthood when they decide to adopt three siblings, including a rebellious 15-year-old girl.Co-written, co-produced and directed by Sean Anders. Read more / Trailer / Showing from 7 December

MORTAL ENGINES Thousands of years after civilization was destroyed by a cataclysmic event, humankind has adapted and a new way of living has evolved.  Gigantic moving cities now roam the Earth, ruthlessly preying upon smaller traction towns.  Tom Natsworthy (Robert Sheehan)—who hails from a Lower Tier of the great traction city of London—finds himself fighting for his own survival after he encounters the dangerous fugitive Hester Shaw (Hera Hilmar).  Two opposites, whose paths should never have crossed, forge an unlikely alliance that is destined to change the course of the future. This tartling, new epic adventure is directed by Oscar-winning visual-effects artist Christian Rivers (King Kong).  Joining Rivers are The Hobbit and The Lord of the Rings trilogies three-time Academy Award-winning filmmakers Peter Jackson, Fran Walsh and Philippa Boyens, who have penned the screenplay.  The Universal and MRC adaptation is from the award-winning book series by Philip Reeve, published in 2001 by Scholastic. Feature: A 24-Year-Journey from Page to Big Screen/ Trailer / Showing from 14 December

ROBIN HOOD Robin of Loxley (Taron Egerton) a war-hardened Crusader and his Moorish commander (Jamie Foxx) mount an audacious revolt against the corrupt English crown in a thrilling action-adventure packed with gritty battlefield exploits, mind-blowing fight choreography, and a timeless romance. directed by Otto Bathurst and written by Ben Chandler and David James Kelly, from a story by Chandler and based on the tale of Robin Hood. Read more /  Trailer / Showing from 28 December 2018

SECOND ACT A comedy in the vein of Working Girl and Maid In Manhattan. Jennifer Lopez stars as Maya, a 40-year-old woman struggling with frustrations from unfulfilled dreams. Until, that is, she gets the chance to prove to Madison Avenue that street smarts are as valuable as book smarts, and that it is never too late for a Second Act. Directed by Peter Segal and written by Elaine Goldsmith-Thomas and Justin Zackham. Read more /  Trailer / Showing from 14 December

SPIDER-MAN: INTO THE SPIDER-VERSE  Phil Lord and Christopher Miller, the creative minds behind The Lego Movie and 21 Jump Street, bring their unique talents to a fresh vision of a different Spider-Man Universe, with a groundbreaking visual style that’s the first of its kind. Spider-Man: Into the Spider-Verse introduces Brooklyn teen Miles Morales, and the limitless possibilities of the Spider-Verse, where more than one can wear the mask.It is set in an alternate universe from Sony’s other Spider-Man properties, but introduces a shared multiverse. The film is directed by Bob Persichetti, Peter Ramsey, and Rodney Rothman, from a screenplay by Phil Lord. Read more / Trailer / Showing from 14 December

THE SQUARE Christian (Claes Bang) is the respected curator of a contemporary art museum, a divorced but devoted father of two who drives an electric car and supports good causes. His next show is “The Square”, an installation which invites passersby to altruism, reminding them of their role as responsible fellow human beings. But sometimes, it is difficult to live up to your own ideals: Christian’s foolish response to the theft of his phone drags him into shameful situations. Meanwhile, the museum’s PR agency has created an unexpected campaign for “The Square”. The response is overblown and sends Christian, as well as the museum, into an existential crisis. Written and directed by Ruben Östlund. The film was entered into the 2017 Cannes Film Festival, where it received positive reviews and won the Palme d’Or. It was subsequently selected for the 2017 Toronto International Film Festival. It went on to win six European Film Awards, including Best Film; two Guldbagge Awards, including Best Director; and other honours. It was nominated for the Academy Award for Best Foreign Language Film at the 90th Academy Awards. Read more / Trailer / Showing from 14 December

ZERO Raj, a man of short stature dreams of dating a specific superstar. He doesn’t know what to expect in return, but what he does know is that true love comes in various forms. Indian romantic drama written by Himanshu Sharma and directed by Aanand L. Rai. Read more / Trailer / Showing from 21 December