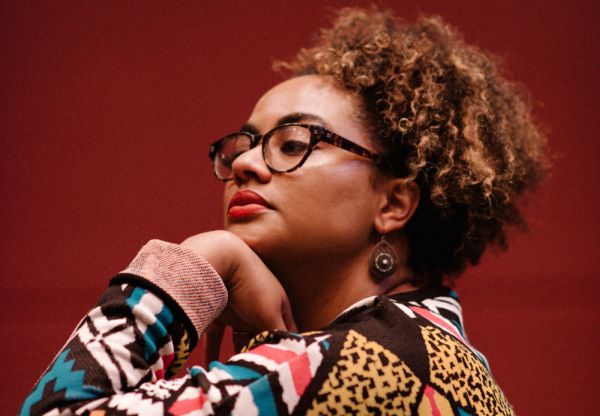 “I hope it opens a conversation about the families of drug addicts, about what they have to go through, and gives more people the bravery to reach out, support and talk to the families they know who are going through the same thing.”

Daniel Dercksen shares a few thoughts with writer Amy Jephta about writing the screenplay for Ellen: The Ellen Pakkies Story, the tragic true story of the troubled relationship between a mother and her drug-addicted son – a relationship that eventually drove her to the edge and led to his murder.

Amy Jephta is a playwright and director from Mitchell’s Plain in Cape Town who has worked as a mentor to community theatre groups based in Kwazulu-Natal as part of the Twist Theatre project, has formed part of the South African New Plays Writing Programme at Wits University, and has been a voice and acting lecturer at CityVarsity in Cape Town and the Woodward School for Contemporary Art in Vancouver as well as an invited lecturer at CUNY, New York.

Amy Jephta walked away with the Best Script Award  at the 2018 kykNET Silwerskerm Festival.

How did you get involved with writing the screenplay for Ellen: The Ellen Pakkies Story?

I was approached by the producer, Paulo Areal, who had already begun working on the project and was still looking for a writer. I immediately said yes to the project.

Was it a a story you could easily identify with?

Yes,  I instinctively connected with the story and with Ellen, the mother behind the headline. I think it’s because she reminded me of every mother, teacher and aunt I have known throughout my life. I grew up on the Flats, and I think older women on the Cape Flats have something in common – a resilience, a toughness about them, but also a kind of humour and joy. I found that warmth in Ellen and immediately had a connection to her and to the story.

In 2007, the death of 20-year-old Abie Pakkies caused a stir in South Africa and the world. The most heart-wrenching part of the case was that the murderer was his mother, Ellen. In taking on the case, advocate Adrian Samuels was determined to prove that Ellen Pakkies had no choice. But what compelled her to stop seeking help? How does a mother become so desperate that she takes her own son’s life?

Told across two timelines, Ellen, Die Ellen Pakkies Story is the harrowing account of a woman put through the penal system, tried for murder and driven by an unflinching love for her son. The film delves into the psyche of a family destroyed by drugs, in one of the most dangerous local communities. A scourge, its consequences reach far beyond the Cape Flats and highlights the systematic failure to protect the poorest of the poor.

Ellen: The Ellen Pakkies Story was produced under the watchful eye of director, Daryne Joshua (Noem My Skollie), in association with producers, Schalk-Willem Burger and Paulo Areal, with input from Ellen Pakkies herself.

Aside from the impressive team behind the movie, it also boasts a stellar cast – praise is streaming in from all corners for the actors’ outstanding performance. Jill Levenberg, who has played several parts in films and on television, including Genadekans, Noem my Skollie (which was South Africa’s official Oscar entry in 2016), Leemte, While You Weren’t Looking, Abraham, Bekkies Gevind, As Ek Huistoe Kom, Fluit-Fluit, Atlas, Uitvlucht and the popular kykNET soapie, Suidooster (for which she received a Huisgenoot Tempo nomination in 2017) is brilliant in the role of Ellen Pakkies and did a lot of research to make her interpretation as honest and accurate as possible.

What was it in the story that inspired the writing of the screenplay?

I think the ongoing theme of a mother’s love for her son – and love above all – inspired the way this story was told. It was too easy to focus on victimhood and the evil of a drug abuser. But the core of the story is a woman who loved her son (and a son who loved his mother, despite the path he chose).

We had very little time to write the actual script. About 6 months, when a normal development process for a screenplay would ideally be around two years. So decisions were made very quickly about what to keep and what to lose. I was still working on the script a few weeks before shooting was due to begin. So the process was difficult, but most processes are. The challenge here was deciding which part of the story to keep, what to exclude, and how to frame the story.

When you watch this film, you realize that Ellen isn’t an evil, malicious person. You start to understand why she did what she did. Did you as a writer work with Ellen Pakkies?

I worked very closely with her when beginning the research for the screenplay. Asking lots of questions, interviewing her, spending time with her.

I think the relationship that was formed really helped deepen the empathy and characterization that ended up in the script. When you get to know Ellen, it’s obvious very quickly that there was nothing malicious or evil about her. She was a woman who had to make a choice based on an impossible set of circumstances.

As a playwright and screenwriter, which medium do you prefer?

I will always love writing for theatre, but film has become my new love. I really enjoy the flexibility, the ability to tell stories through pictures, how editing together images can tell a profound story with very few words. The difference for me is really being able to think in pictures rather than in language.

How much has the film industry changed since you wrote your first screenplay?

So much – there’s a lot more opportunity. The industry is flourishing. Producers are interested in stories that serve a wide demographic of the South African public. And our work is being recognised on international platforms. International audiences have realised we have something special to contribute to global storytelling. All those developments are very exciting to me, as a screenwriter.

I think we’re going to see more stories that move away from the stereotypes and notions of what kind of story serves a particular demographic. For example, as much as a story like Ellen is extremely important (and it is), I also think Coloured audiences are hungry for a narrative that shows the other side of pain and poverty on the Cape Flats. That shows the joy and resilience and beauty of the community. And those stories are in the pipeline.

Any advice for writers who would like to get their work produced?

Some of it is waiting for someone to recognise you and give you a ‘break’, but at the same time, there’s plenty YOU can do while you’re waiting.

My biggest advice is – read screenplays. I try to read at least one screenplay a day, every night (they’re free on the internet – just Google). I do this instead of necessarily watching films. I’m more interested in seeing how the writer, as the first creator of the world, has envisioned the story. Reading screenplays exponentially improves your writing, and will set it apart from another script where the writer clearly has no grasp of form, style and voice.

Attend film festivals and meet and talk to producers – not just about your idea, but about their films and other ideas they have for projects.Much of my work has come from just listening to producers talk about what they’re excited about, and then making a contribution to that conversation and ultimately getting the job.

My experience is you’ll have to service other people’s ideas first, to get a foot in the door, before your great screenplay idea is produced.

I’ve never sent out a completed screenplay that was fully my idea and was ‘picked up’ wholesale by a producer, so I would not recommend writing a whole script and trying to get it sold – unless you’re writing the script for yourself, with the knowledge that it will be difficult to sell.

Where I have had my own ideas put into development (which only happened this year – 2018), it was because I had a strong pitch – a hook, a concept, a set of characters that I know inside out, a clear idea of the tone of the film (and similar films in the genre), and an idea of who the film was aimed at.

I think producers look for a fresh voice or a interesting new angle on an old story. And of course, marketability – will the film sell? It’s called the ‘movie business’, after all.

I’m writing on several television shows: a Deon Meyer thriller which is being turned into a series for M-Net, a sci-fi series for a big network (about which I can’t yet disclose details), and a sitcom for SABC.

I’m also developing three new films under my own production company banner, PaperJet Films, for which we just got development funding.

I’m also slowly being pulled back into theatre work, writing a new musical and a play.

What do you hope audiences will get from watching Ellen: The Ellen Pakkies Story?

I want audiences to be moved to understanding, to empathy. I hope they walk away from the film with a new insight into how the systems of government and civil society are anti-poverty. I hope it opens a conversation about the families of drug addicts, about what they have to go through, and gives more people the bravery to reach out, support and talk to the families they know who are going through the same thing.