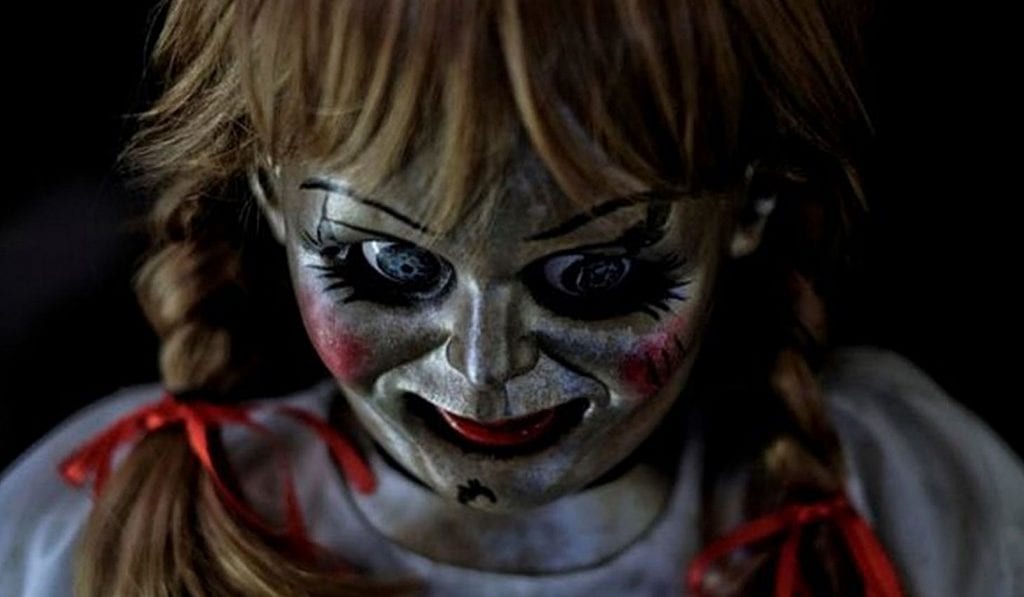 Gary Dauberman, the screenwriter of the “Annabelle” franchise, IT and the upcoming IT Chapter Two, and The Nun, makes his directorial debut on Annabelle Comes Home, also crafting the screenplay for the third installment of New Line Cinema’s hugely successful Annabelle films starring the infamous sinister doll from the “Conjuring” universe.

“It felt like a natural progression and the right time to make that leap, and James and Peter were very supportive,” says Dauberman of producers James Wan and Peter Safran.

Dauberman wrote the screenplay from a story by himself & “Conjuring” universe creator James Wan (Aquaman), who has produced the last five film’s under his Atomic Monster banner.

“It’s the early `70s, a little while after the Perron case we followed in ‘The Conjuring.’  The Warrens are starting to deal with a little press surrounding them as people find out what they do for a living, which, unbeknownst to Ed and Lorraine, is weighing heavier on Judy than she’s letting on.”

Judy Warren is their ten-year-old daughter.  And while this only briefly touches on the event outlined in the real Warren case files, Dauberman felt it would be interesting to experience the paranormal world her parents inhabit from Judy’s point of view.  “What would it be like to be their daughter and see them come home from work, where they deal with these frightening, otherworldly occurrences every day?” he ponders.  “Or to have objects that are essentially souvenirs from all their terrifying investigations just sitting there down the hall?”

Curiosity would certainly get the better of most kids, but Judy has steered clear of that part of the house, appreciating the gravity of her mom and dad’s warnings against venturing beyond the locked door.  Annabelle might be the most recent addition to the eerie collection, but the space hosts hundreds of items, every one of which has been deemed dangerous enough to confine and to receive regular holy blessings from a priest.

“Cinematically, we always loved the idea of using the artifacts room as the home base for a movie,” says Safran, who has produced all six films from the “Conjuring” universe.  “We’ve shown it before, we’ve hinted at the opportunities that lie within, but with ‘Annabelle Comes Home,’ we get to play it out to its fullest extent.  The story that Gary and James conceived is based on the notion that Annabelle cannot truly be contained, that she is, in fact, a beacon for other evil spirits.”

Also producing the film, Wan, creator of the “Conjuring” franchise, says, “I think my obsession with creepy dolls led me to the Warrens, and it was stumbling across the story of the real Annabelle that led me to dig deeper into who they were and to learn about this doll that was the centerpiece of their collection.”

Since introducing his film version of Annabelle to the world, Wan admits, “My fascination with the idea that an inanimate object—something that’s supposed to be so innocent and meant as a child’s plaything—could harbor a demonic entity only grew exponentially.  So, with the Annabelle stories and then the Crooked Man in ‘The Conjuring 2,’ I’ve continued to feed that interest.”

Now, having come “home,” Annabelle has a lot of “friends,” and the filmmakers have a unique cast of characters to work with…only a handful of them human.  “In our story, the Warrens go away for a night, as they often did for work, leaving Judy at home with her babysitter, Mary Ellen,” Safran notes.  “Because the main events of our movie take place essentially over the course of that one night, we ratchet up the intensity very quickly and keep it going for most of the film.”

Patrick Wilson, who returns in the role of Ed Warren, says he and co-star Vera Farmiga “love playing these roles because we know we’re going to get to do some high drama with some high level scares, dealing with some pretty dark things, but also find all those moments to show that other side to this couple.  In this film especially, our part is largely that of loving parents to Judy.”

When Dauberman and Wan began conceiving the story for “Annabelle Comes Home,” Wan was working on “Aquaman” with Wilson.  Recollecting a conversation they had, the actor says, “James wanted to move forward in the next ‘Annabelle’ movie, to get out of her past and to get her home, meaning the Warrens’.  He had the idea to bring Lorraine and Ed into it to set it off and then go from there.  And that’s exactly what this movie does.”

The film opens with the Warrens taking Annabelle from the nursing students—who are more than happy to relinquish her—and then driving along a rather deserted rural road with the doll sitting, disconcertingly life-like, in the back seat of their car.  “Something very squirrely happens on the way—which is based on a real situation that the Warrens encountered on the way home with the doll—that’s a bit of a hint of things to come,” Wilson teases, “but obviously they make it home.”

Alongside Wilson, Farmiga steps into the role of Lorraine Warren for the fourth time and adds that much of what attracts her to these stories is “the purity of their love and how connected they are, how they balance each other.  That, as well as the idea of their faith being such a strong force for them, is in such stark contrast to the darkness they encounter.”

It’s that darkness, along with the fact that the Warrens aren’t home, that draws Mary Ellen’s friend, Daniela, to the house.  She lets her overwhelmingly inquisitive nature get the best of her and, in fact, even has her own very personal interest in what the Warrens do.  And by merely unlocking Annabelle’s case, she sets many of these seemingly immovable objects free to become an unstoppable force for all three young girls to battle…possibly to the death.

Despite the frightening nature of the material, Wilson and Farmiga have always infused their characters’ on-screen relationship with a sweetness that reflects that of their real-life counterparts, and working together again was a pleasure for both.  Farmiga says that no matter the seriousness of the scene they are shooting, “I love the amount of smiles that Patrick doles out on a daily basis,” even joking that “once I timed him just to see, and in the span of 60 seconds he smiled at least 15 times.”

Farmiga also says that it was great working with Dauberman for the first time.  “It’s like Oz, finally coming out from behind the curtain and overseeing his vision, stepping up to the helm with such confidence,” she smiles.

Dauberman relished working with both Farmiga and Wilson as well.  “Having the opportunity to direct Patrick and Vera as Ed and Lorraine was really a dream come true,” he says.  “They know these characters so well and have such great ideas about how to work through a scene.  It felt like getting behind the wheel of a Ferrari; they work so smoothly and know just what to do, on some things you just take your hands off the wheel and know you’re in great shape.

“Thematically, we’re really proud of these films and didn’t want to veer too far away from what makes them so popular,” Dauberman offers.  “This cast, including Patrick and Vera as Ed and Lorraine, and this location, especially the artifacts room, really make our story unique.  Spending almost the whole movie in the house we’ve only had glimpses of before really drives the fear as the story unfolds, and also expands the mythology that has been laid out in the previous films.

“I think audiences will be excited to watch ‘Annabelle Comes Home’ because, well, people can’t get enough of Annabelle,” he continues.  “In the very place she is supposed to be locked away and everyone is supposed to be safe, instead, they’ll get to see her unleashed, manipulating not only the people in the story but the other haunted objects all over the artifacts room.  Hopefully it’s both a really fun and really terrifying time at the movies.  And we plant some breadcrumbs, too, that we may pick up later down the road.  There are definitely a few other haunted objects that have a cool story to tell…”

Writer/Director Gary Dauberman is one of the most sought-after writers in Hollywood today.

Dauberman is a filmmaker whose unique voice can be heard in his numerous projects, which include original content and franchise film series in both film and television.

Dauberman joined the creative team behind The Conjuring universe when he wrote the screenplay for Annabelle, based on the seriously creepy doll that first appeared briefly in James Wan’s The Conjuring.

Another successful franchise for Dauberman is the IT film series.  He penned the screenplay adaptation of Stephen King’s beloved tome IT, directed by Andy Muschietti.  The film was released in September 2017, breaking box-office records (including for biggest horror opening ever) by earning over $189 million worldwide in its first weekend.  The film ultimately earned more than $700 million worldwide.  Dauberman also wrote the film’s sequel, It Chapter Two, which is currently in post-production, and set for release on September 6, 2019.

Also set in“The Conjuring”universe is The Nun, written by Dauberman from a story he wrote with James Wan.  Released in September 2018, the film was a box-office smash, breaking records and topping the international marketplace for two weeks.  It earned more than $365 million at the worldwide box office.

Switching gears with The Curse of La Llorona, Dauberman served as a producer on the film, which was released in April of this year and opened at #1 at the box office both domestically and internationally.

Upcoming writing projects for Dauberman include a remake of Train to Busan, which he will also produce, and Stephen King’s Salem’s Lot, which he will executive produce.

For television, Dauberman wrote Swamp Thing with Mark Verheiden for Atomic Monster and Warner Bros. Television.  He was also an executive producer on the series, which began streaming May 31 on DC Universe.