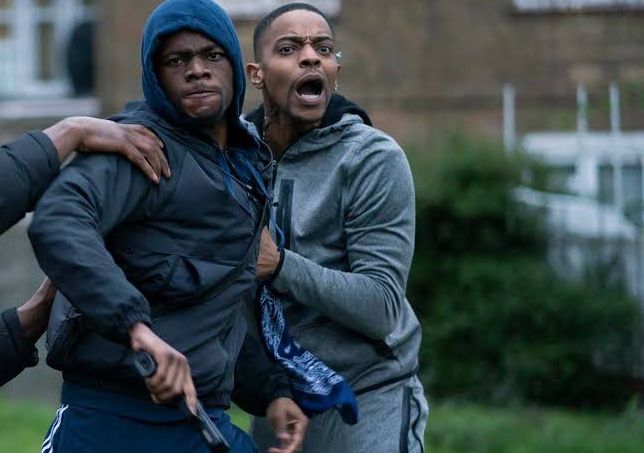 Born and raised in South-East London, Rapman first burst onto the public’s consciousness in 2014 with a series of short films released on YouTube that he wrote, directed, starred in, and provided music and lyrics to.

Inspired by the storytelling style of rappers such as 2Pac, Eminem, and the Notorious BIG, Rapman’s shorts were a unique combination of music video and narrative filmmaking, shot on the streets of South-East London and featuring his very own rap narration.

Rapman’s first success came with 2014’s Blue Story, a three-part, semi-autobiographical tale based on his childhood in Lewisham.

“My mum sent me to school in Camberwell, next door to Peckham, where the notorious gang, the Peckham Boys, resided. Obviously, parents look at Ofsted reports when they decide which school to put their children in. But there are no reports that can tell you if the two areas are in a postcode war. When my mum sent me there, she was thinking, they get great results at GSCE, it’ll be a great school for me, not knowing that the area I’m living in, and the school I’m going to, is run by two different gangs that are in a real, deep blood feud. That generation, they don’t understand postcode wars and rivalry, so they can’t be blamed. So I just wrote a story based on my life.”

Not that Rapman was part of a gang but, much like Timmy and Marco, the school friends at the heart of Blue Story, he witnessed the effects of violence first-hand and used his personal experience as the basis of his story.

“The whole going to the school and getting accused of being a gang member is all true, up to getting jumped by the boy and his friends,” he reveals. “The rest of it tells things that happened between the two gangs, but is not connected to me.”

Released on YouTube, the Blue Story trilogy made a ripple rather than a splash. “I was very unknown at the time, I literally had a couple of hundred followers. People knew me in my local area, and from other areas in South London, but it started picking up a bit of a vibe.

After doing Blue Story the trilogy, all the fans that liked me for my rap style wanted more stories, so I made many other shorts similar to Blue Story, and then they took off last year …”

In 2018, Rapman wrote and directed the three-part Shiro’s Story. Inspired by a true-life story of a Lewisham man who uncovers a shocking family secret, Shiro’s Story starred Joivan Wade (The First Purge) and Percelle Ascott (The Innocents), with the actors mouthing his long-form raps and Rapman appearing on screen as a kind of Greek chorus. And once again, it was shot on the streets of London, guerrilla-style, by Rapman and a small group of friends.

While the Blue Story trilogy earned Rapman a local following, Shiro’s Story rocketed him to global stardom, when the first two instalments clocked up a combined 7million views on YouTube and later won Video Of The Year at the 2018 GRM Daily Rated Awards. “Shiro’s Story is what got everyone knocking on my door,” he reflects, “but there was a big journey from Blue Story to Shiro’s Story. After five years of making shorts, something about Shiro’s Story connected.”

Rapman suddenly found himself in huge demand on both sides of the Atlantic, signing a “life-changing” deal with Jay-Z’s Roc Nation who now manage him in film and TV as well as providing him with his own record label to release his own music and that of other artists.

“After Shiro’s Story, I was contacted by every single production house in the UK to adapt it into a TV show or series,” he explains. “Everyone was meeting me, giving me the reason why they should be the ones to make it and get it to wherever I wanted it to be, whether that be Netflix or Amazon. It was getting a bit daunting, everyone saying the same thing over and over — why they should make Shiro’s Story.”

It was at one such meeting that Rapman met with veteran British film producer Damian Jones whose credits include Belle, Kidulthood and Adulthood.

“I thought Shiro’s Story was very impressive and really distinct,” says Jones. “I guess you could call it a hybrid of short film and music video, but I had not seen storytelling done like that in terms of his rap narration and his voice over, in terms of him appearing on camera and the rap coming out of actors’ mouths. I thought it was really clever and original and completely engaging. Production value-wise it looked top notch, too; it was shot with flair and distinction and style. But it was the voiceover, the rap narration, that was the real calling card for me, because I had not seen that before. Ever.”

“One of the guys who we got to help on Shiro’s Story said a guy called Damian Jones wants to meet,” remembers Rapman. “He said, ‘He’s the real deal, he makes a lot of good movies, and probably could help you, if not with Shiro’s Story then with the film you want to get made.’ So I went to meet him, waiting to hear the same pitch about Shiro’s Story. The only difference was, he said, ‘What else have you got?” I thought, Wow! Out of all the people I’d met, all the companies, all the head of productions, this is the first person to ask, ‘What else have I got?’ I was like, ‘You know what, I’ve got this script …’

Jones read it immediately and flipped for it. With a single reservation: Jones felt the draft was missing one, vital ingredient. “The thing it didn’t have, and what I think is his amazing storytelling ability, is the rap narration. I asked him to put that into the script. Not necessarily the raps — the detailed lyrics themselves — but that he would introduce it and rap narration would appear, either as a voice-over or on camera with him in it, during certain points in the movie.”

Rapman was more than happy to oblige. “At the point I wrote it, there wasn’t a Shiro’s Story. Blue Story was still very underground and I didn’t know if the world would understand this whole rap narration thing, if they would think it’s cool, or if they would think it’s irritating, or they don’t understand my rap style,” he says. “I wrote it as a traditional script ’cos I always wanted to make movies. I was kind of like, ‘You sure?’ ’Cos I was worried they wouldn’t they take me seriously as a filmmaker, like, it’s just an hour and a half music video. Damian said, ‘Your USP is so, so powerful, it makes it so much easier to get the film made. It makes it so much more special. It stands out more.’”

“It’s a different way to tell stories,” concurs Joy Gharoro-Akpojotor, whom Damian Jones brought on board to produce the project with him. “Raps has got an important voice. There’s something interesting about what he’s trying to do, the way he approaches his work, combining music and drama in a way that appeals to young people. Because, when you watch Blue Story, what would normally be eight-minute scene, he can tell you in a minute, and you still get the emotional connection.”

At this point, only parts one and two of Shiro’s Story were available online, and Jones decided to wait for the final chapter to drop on YouTube before taking Blue Story out into the market.

And when it clocked up an impressive 7million views in the first couple of days, Jones decision to wait paid major dividends, as he found himself presiding over a bidding war between financers and studios eager to be involved with Rapman’s debut feature.

“I’m very pleased to say it blew up as predicted, and because of the heat and the subject matter and the success of his previous work, which was there for all to see,” says Jones. “There’s an authenticity to the story, based on his own experiences, and, given the current climate in London and elsewhere in the UK, it’s very on point. It was a message that needed to be told by someone who knew how to tell it. And then, obviously, he’s got a huge fan base, and people wanted to capitalise on that.”

“When I read the screenplay for Blue Story, it immediately struck me as something fresh and original and would make for a credible and standout cinema experience and the end product most definitely accomplishes that,” says John Fletcher.

“Rapman’s filmmaking does not hold back and for a first time feature is extremely mature and accomplished.  This film and its message deserves the platform it is being given.”

Within a couple of weeks, Jones had set Blue Story up with BBC Films and Paramount UK. “And we were in production rapidly.” So rapidly, in fact, that Rapman couldn’t quite believe it. “Three days later he’s telling me we got offers. I didn’t know if he was serious, if the film could get made as quick as he’s talking. I didn’t take it all in because I had so much going on, and I wasn’t really banking my all on his making Blue Story. I was just thinking, if this Damian guy’s not the real deal, I could always take the money I make from this TV deal for Shiro’s Story and make my film later. That was always in the back of my head, just in case this Damian guy wasn’t serious, but it turns out he was.

“What I want to do with this film is show people, the kids involved in gangs, that the decisions you make can affect not just your life but those around you. You might think that everything you’re fighting for is so important — but is it? Are the people you’re fighting for, dying for, are they even your friends? Why do you feel you need to bleed for an area? You’re not enlisted. You’re not a soldier fighting for the country. It’s just the estate the council put your parents in. You could live anywhere. Your mum could have been moved to the opposite area. With a lot of these kids, it’s literally wherever the council decides to put you.

“I just want to put the message out that it’s stupid to die for something like this, for your area, and for things that could really be resolved with a conversation. I wanted to put the message out there that postcode wars are all bullshit; gang wars are all bullshit. That is the message of the film. There’s so much more you can do with your life. That’s why I have a character ask, ‘How many singers do you know who come from Peckham?’ And he says, “John Boyega’s from Peckham and he’s in Star Wars.” I’ve tried to show that there are other ways to get out of the poverty life you’re living, because John Boyega grew up on the same estate where are all of these gangs are and look at him now — he’s one of the biggest stars in the world.

“I want to tell young people that this life that you’re fighting for, that you’re so dedicated to, is not the only way out. It’s very stupid and it’s not worth dying for.”