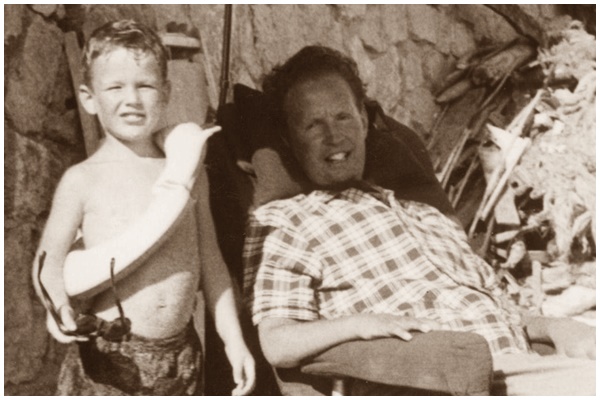 A heart-warming and highly emotional celebration of bravery and human possibility, Breathe is a love story about living every breath as though it’s your last.

Producer Jonathan Cavendish had always believed that his father’s life story would be powerful material for a compelling film. Robin Cavendish had been a trailblazer, a remarkable, larger-than-life figure. He was diagnosed with polio in his late 20s and remained paralysed from the neck down. Totally reliant on a respirator that ‘breathed’ for him, he faced a life confined to a hospital bed. Yet he refused to accept that fate: with the help of his wife Diana, and their inventive and supportive friends, he found a way to live his life in the world, outside of the hospital.

Cavendish’s dream is now realised 15-years later with the radiant and life-affirming film Breathe, based on the true story of his own parents and scripted by twice Academy Award-nominated writer William Nicholson (Everest, Les Misérables and Gladiator), and marking the feature directorial debut of Andy Serkis (War for the Planet of the Apes, Star Wars: The Force Awakens).

Breathe is a tender love story about two strong, resourceful people whose existence is jolted by a devastating setback, but who together choose to fight back and live meaningful lives filled with love, laughter and joy.

In 1957 Robin Cavendish (Andrew Garfield – Hacksaw Ridge, Silence) , a dashing, charismatic young Englishman, meets a beautiful woman named Diana Blacker (Claire Foy – Golden Globe Winner, The Crown, Wolf Hall)and swiftly decides to marry her. He takes his new wife out to Kenya, where he works as a tea broker. But within months he is struck down by polio, which leaves him completely paralysed from the neck down, and dependent on a respirator to ‘breathe’ for him.

Against all advice, Robin’s wife Diana  brings him home from hospital where her devotion and witty determination transcends his disability.

More than anything, Robin wants to live in the world rather than in a hospital bed, and Diana resolves to help him achieve his wish. Against all medical advice, Robin leaves hospital, and moves around in a remarkable wheelchair with a respirator attached, developed by his friend, Professor Teddy Hall.

With this act of defiance, Robin is already a pioneer, but he goes further, crusading for other severely disabled people to benefit from the kind of mobility he fought for himself. Confounding medical experts simply by surviving, he battles tirelessly for the rights of the disabled – with his beloved Diana always at his side.

Together they refuse to be imprisoned by his suffering; dazzling others with their humour, courage and lust for life.

Jonathan’s plan to make a film about his parents took concrete shape when he went to the theatre to see William Nicholson’s Shadowlands: “I thought not only was it a very good play, but it also had a voice and tone that I recognised, and one I knew would suit a film about my parents and their life. It summed up British understatement and emotional complexity.”

Jonathan already knew Nicholson well. He had produced Elizabeth: The Golden Age, for which Nicholson had written the screenplay: “So I took Bill out to lunch and asked if I could tell him a story. When I started talking about my father’s life, he had a forkful of food held up towards his mouth. When I’d finished, about 15 minutes later, it was still there!”

Nicholson remembers that day too: “Jonathan said: ‘I have a story to tell you. It’s about my father.’ And as soon as he’d finished, I said: ‘I’m in. It’s incredible.’

“For a long time now I’ve been in the position where I only write what I want. And that’s exactly what happened with this story. There was no money, no contract and no prospect of it ever being made. But I thought it was great and I wanted to do it.”

Nicholson insisted that he should not take payment upfront for writing the script: “It was Jonathan’s own money, and I didn’t want to work under those circumstances. It felt like a privilege to be asked. So what I said was: ‘I will share the risk with you. If the film happens, give me a share.’ And that’s exactly what happened.’”

Bill started writing, and over the years they continued to hone script and story. Jonathan recalls: “Bill and I would work on a draft of the script, put it down and then pick it up again. He would ring me when he had a few weeks between films and books, and then we would have a short flurry of activity.”

In the meantime, Jonathan formed a company called The Imaginarium with actor Andy Serkis, best known for playing ‘Gollum’ in Peter Jackson’s The Lord of the Rings trilogy and ‘Caesar’ in the Planet of the Apes films. The Imaginarium is a multi-platform production company, dedicated to “next-generation story-telling”, linked to a performance capture studio. It was Jonathan and Andy’s ambition also to make films together, which Jonathan would produce and Andy would direct. Andy worked as a second unit director on Jackson’s Hobbit trilogy, and then directed Jungle Book: Origins (currently in post-production), produced by Jonathan Cavendish for The Imaginarium, to be released in 2018.

By a curious coincidence, when Andy and his wife (actress Lorraine Ashbourne) decided to buy a house in the English countryside near Oxford, it turned out that the property was a few hundred yards from Diana Cavendish’s home, where so much of the action of Breathe takes place. “As a result, Andy got to know my mother very well,” Jonathan says.

“I read the Breathe script.” says Andy, “And blubbed my eyes out. One day I said to Jonathan ‘I really want to direct this.’ The Imaginarium had only recently started – and I had only done second unit directing on The Hobbit – so Jonathan could have turned around and said – ‘well, I don’t know – But he didn’t. He said: ‘I think that’s a great idea.’”

In screenwriting circles, veteran Bill Nicholson (Gladiator, Les Miserables) is known as a master of what he calls “the double ending” – one which has elements of both triumph and sadness. “I try to do it every time,” he jokes, “but then, so do most good stories. There are very few stories that head towards an unremittingly happy ending. And every ending has to be earned. So I’ve deliberately selected stories that have that wrench at the end, the up and the down. It feels as if that’s actually what life is like.”

His film credits include: Sarafina, Nell, First Knight, Grey Owl , Gladiator (as cowriter, for which he received a second Oscar nomination), Elizabeth: the Golden Age, Les Miserables, Mandela: Long Walk to Freedom, Unbroken, and Everest. He has written and directed his own film, Firelight; and four further stage plays, Map of the Heart, Katherine Howard, The Retreat from Moscow (which ran for five months on Broadway and received three Tony Award nominations), and Crash.

He found himself genuinely intrigued by Robin Cavendish’s remarkable story, “but the thing I responded to most was that because of his condition he was faced with a choice the rest of us are not faced with – it was forced upon him, this choice. First, he wanted to die. Then he learned he wasn’t immediately going to die. And then he made an active choice to live. I felt that for him that choice was renewed every day. So to tell the story of someone who at the beginning of every day might die that day, but chooses to live – it’s an extraordinarily strong affirmation of the power of being alive. That was the heart of it for me. So yes, I was touched and moved and impressed by Robin Cavendish – and I suppose, to be brutally honest, I thought: ‘I could make a damned good story out of this.’ My name would be on a good piece of work, which is what motivates us, writers. It’s not so often these things come up.

It turned out that Andy Serkis had his own personal reasons for wanting to direct Breathe: “In my life, I’ve been very linked in to the world of disabled people,” he observes. “My mum taught disabled kids when she was young. Jonathan had seen and loved the film Sex & Drugs & Rock & Roll, in which I played the singer Ian Dury — who of course was a famous polio sufferer. Also, my sister is an MS (multiple sclerosis) sufferers. She’s wheelchair-bound and has been for 10 years now. My dad was a doctor, so I grew up around a lot of medical issues. Out of my Mum’s pupils, I knew a lot about polio, spina bifida, thalidomide, and all those older diseases. I told Jonathan: ‘what’s extraordinary about the script, apart from it being the most amazing love story, is that it’s both true and humorous.’ And I also responded to the fact that Robin and Diana were pioneers.

I thought of it this way: it’s hard for my sister to get around in a wheelchair even now. But in 1960, to choose to take yourself out of the hospital, where the risk of survival was practically zero, and to invent a life and to invent technology to allow yourself to survive – to choose to be two minutes away from death at all times: it’s like an epic climb.

I’m a mountaineer too, and I liken what Robin did to the idea of climbing Mount Everest in your back garden. And then those other people who came after him, who were out of hospitals but also on those machines – they came to be called ‘responauts.’ I just loved that idea — that Robin and Diana were constantly pioneering.”

Jonathan observes: “When Andy and I started The Imaginarium, I knew he would become a great director. I was totally convinced he had it in him. And when he asked if I’d consider him directing the movie, he agreed with me that it’s a story about the power of love in overcoming all the difficulties that Robin and Diana faced. But Andy also saw it as a story about people doing things no one had ever done before and doing them in their own way. Though I’d obviously lived through all of that, I hadn’t realised quite the trail-blazing nature of my parents’ lives.”

For his part, Bill Nicholson was delighted by the choice of Andy as director: “He’s a wonderful person, a proper grown-up. He has almost no ego. He’s been an actor so long and watched the process so often. Maybe he’s seen people having tantrums, so there’s none of that. He’s pleasant, calm — humble even. And he was very nice to me about the script. In fact, he gets a lot more out of the script than I put in. Andy has two big strengths. One is his directing with actors. The acting in Breathe is mindblowing. It’s real film acting. He’s got wonderful work from his leads, Andrew and Claire. But then Andy gets good performances all the way through the cast, down to the smallest roles. He also thinks his way through the movement of each scene in terms of the camera. He often constructs a scene in terms of camera moves – his attention to where it begins and ends is very thorough.”