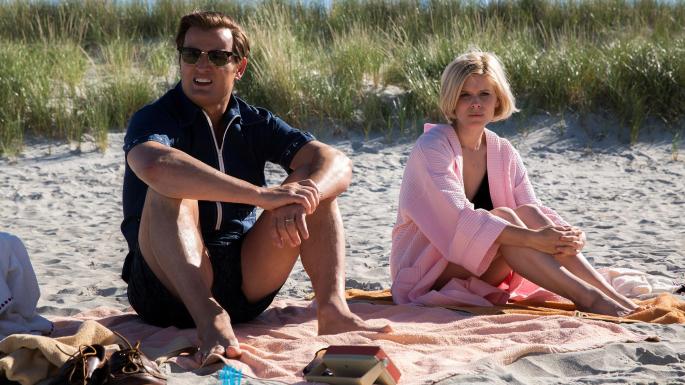 It marked the tragic end of a promising life for political strategist Kopechne and the end of any presidential hopes Senator Ted Kennedy had.

Chappaquiddick screenwriters Taylor Allen and Andrew Logan, who both grew up in Dallas where John F. Kennedy was assassinated in 1963, had a strong emotional connection to the Kennedy family, long before their 2015 screenplay landed on the Blacklist. Living there, the tragedy in Dealey Plaza was impossible to ignore and it sowed a lifelong curiosity about the Kennedys’ Camelot.

Allen says the murders of JFK and Bobby, as well as the other misfortunes surrounding the family, led them to wonder about where Sen. Ted Kennedy fit in.

“As a human being, he’s so underexplored in cinematic terms,” Allen says, pointing to films like 1991’s JFK and 2006’s BOBBY that have explored the older Kennedys’ lives. “Once you start looking into who Ted was, all roads lead to Chappaquiddick. There’s a younger audience that will really have their eyes opened. For me, Ted is definitely the most relatable of the Kennedy family, and in his youth he was the black sheep of the sons. The press covering him in the 1940s and ’50s referred to him he as the ‘overweight’ Kennedy. He was expelled from Harvard for cheating on a Spanish exam, which created a rift with his father. Moments like these humanize him. That’s why he struggled so much to do the right thing in this situation.”

Chappaquiddick is a piercing reexamination of the true events surrounding the most difficult seven days of Senator Ted Kennedy’s (Jason Clarke)  career when he drove off a bridge, ending the life of his passenger Mary Jo Kopechne (Kate Mara) , a promising political strategist who had worked on his brother Bobby Kennedy’s presidential campaign the year prior.

It starts on the eve of the moon landing, July 18, 1969, at a party in a rented house on Chappaquiddick Island, celebrating a reunion of many Bobby Kennedy campaign workers. With his brother John’s presidential legacy looming large as his promise to land a man on the moon is coming true, Kennedy leaves the party early giving Kopechne a fateful ride to the ferry.

He approaches a narrow bridge at angle with the dirt road and in an instant the car flips over into the murky waters below. Kennedy escapes but the 28year-old campaign worker remains trapped inside. In the aftermath, Kennedy fails to report the accident for nine hours. The Senator struggles to follow his own moral compass and simultaneously protect his family’s legacy, all while simply trying to keep his own political ambitions alive.

Directed by John Curran (Tracks, The Painted Veil) from a screenplay by Taylor Allen and Andrew Logan.

Instead of writing a biopic, Allen and Logan wanted to focus on this particular week in Kennedy’s life because of the historical backdrop.

The country had seen the back-to back assassinations of Martin Luther King Jr. in April 1968 and Bobby Kennedy in June 1968. Ted was at his brother’s side the night he was shot at the Ambassador Hotel in Los Angeles, and Kopechne too had worked on his presidential campaign.

At this moment in July of 1969, the country was watching the Apollo 11 space mission on TV, which fulfilled JFK’s promise to take America to the moon. Just two days after Ted leaves Kopechne to die in shallow water, Neil Armstrong planted a flag on the lunar surface.

Ted had always lived in the shadow of two more successful older brothers, and winning the presidency was his chance to redeem their legacy. In some ways, Ted was the last hope of the Kennedy family. Something went spectacularly wrong that night in the dark.

Because the incident is steeped in lore and conflicting information, Allen and Logan decided the best way to tell the story was to go back to the 1970 Edgarton, Massachusetts Court inquest (“It’s the Rosetta stone for every book that’s been written,” Allen explains), after which Ted was given a two-month suspended jail sentence.

“We never wanted this to be a conspiracy movie,” Logan says. “We pulled from objective facts to lay the groundwork—no insinuation, no innuendo, but the real truth,” adds Allen. “That’s why our collaboration with director John Curran was so successful because we shared that passion for fact-finding.”

But their obsession with including all of the pertinent details had to be tamed at some point. “We thought that every detail was rich and important,” Logan explains, adding,“Our first draft was 196 pages long. It was a beast. We had to chisel away to get to the heart of the story. Because  we were so research-driven, a lot of that research found its way into the script, and so it was a process between Taylor and me to figure out how to parse everything down into 120 pages.”

Says Allen: “There was a great scene where Ted bought his newspaper in the morning from the hotel desk clerk, and we thought it was interesting from the perspective of: what was not actually a normal day at all seemed to be [a] normal day to everyone that encountered him, and that was just one of the many people he encountered. So we have all those details about what was on that paper and what he talked about with the clerk, and all of it was on the record, so that was really exciting, but you end up condensing, so now we just have a scene where he’s at brunch with the other people at the race, and that speaks to those larger themes.”

The 1970 inquest boils down the story to a few incontrovertible facts, but the truth continues to lie somewhere in between. Apex Entertainment’s Mark Ciardi, whose company fully financed the production and acquired the script from DMG Entertainment in 2015, says the many layers of the Chappaquiddick story are what make it relatable today.

“It does feel uniquely current right now, even though the story happened in 1969,” Ciardi says. “You wonder how Ted managed to avoid jail time. Who are all of these loyal people assembled to help save his career? It really plays like a thriller, particularly for younger audiences who aren’t familiar with the story.”

Ciardi, who acquired the script before it hit the Blacklist, says John Curran was on his short list of directors from the beginning. “I’ve always been a fan of John’s. I loved The Painted Veil and had recently watched and enjoyed Tracks, so I wanted to get the script to him. He responded to the material, and we saw eye-to-eye on the approach. We both really wanted this to take a neutral, nonpartisan view of the story so that the audience can take what they want from it. We didn’t pick a side.”

John Curran (center) behind the scenes of Chappaquiddick

Curran, like Allen and Logan, considers Chappaquiddick a character study more than anything. “The main thing for me was to make Ted human, not have him be a cipher for a political point of view. Chappaquiddick is a parable based on truth. You couldn’t call it a factual document because no one really knows the truth about what happened below the bridge. We did it as honestly as possible.”

“There’s the responsibility, I think, with any historical film: you feel there is a sense of responsibility to get it right in some way. But the great thing about this story was that a lot of it is built around myths and conjecture. So, what I think these guys did really well was actually going to what are on-the-record facts about this story. And a lot of them come from Ted himself — his evolving story — and the film kind of follows the evolving story to the point where, [by] the end of it, you’re really no closer to the truth; the actual truth. For all we know, the events of that night are completely different than what we have in the film. But I think what was freeing about the way these guys approached it was [that] it is kind of the point. A lot of it was deflection and cover-up.”

Says Allen:  “One of the things that John says is interesting is that maybe they were completely different, but [that] ultimately, the sourcing is drawn from these many different perspectives that people brought to it. So while the film isn’t trying to be the definitive source or the definitive truth, it is an amalgamation of many people’s different viewpoints, and so it’s got an effect in that way that you come away wondering, and hopefully capturing more of an essence of truth from these perspectives.”

Finding the right actor to play such a recognizable public figure was a delicate balance, Ciardi says.

“Jason Clarke had been someone we looked at early on in the process, and he was always my favorite. Jason’s a great actor, but not so well-known that you think you’re watching this actor play Ted Kennedy. He could play this strong character and still blend into the film, plus he kind of resembles Ted.” The fact that Curran and Clarke had already worked together helped make the choice easier. “When the script came to me, Jason was already attached, which was a big draw for me,” Curran says. “Jason was in my first film back in Australia (1998’s Praise).”

The Mary Jo character was also important because Allen and Logan had emphasized her accomplishments in the script, unlike how she was initially portrayed in the media in real life after the accident. “The fact that she was young and blonde immediately spun out of control,” Logan says. “We wanted people to know how bright she was and what a promising future she had. If the audience could fall in love with her, then after she’s gone her presence is still felt.” Kate Mara ultimately got the role of Kopechne.

In working to tell an authentic story, Ciardi and Curran wanted to get the historical details correct for the look of the film, and that meant heading to the titular location.

Production spent two days shooting the ferry, the road and the bridge in Chappaquiddick, as well as several weeks in the North Shore of Boston.

“There’s such a specificity about where this story took place, and you have to re-create that,” Curran says. “I wanted the character of the environment to be authentic. When you go out there and see Chappaquiddick, you’re struck by how remote and how dark it is.”

For stunt work, production painstakingly re-created the infamous bridge at Baja Film Studios in Mexico, but having the opportunity to shoot and research in the real Chappaquiddick was an invaluable part of the process. “The value of shooting the real bridge in the film brought a real air of authenticity,” Curran says.

Says Allen:  “One of the great joys of writing the movie; was getting to put on the Woodward and Bernstein hat and have my day being a journalist and looking into court records. There’s actually an inquest into whether or not a crime was committed that weekend. And that inquest brought back everybody six months later to testify under oath; the boiler room girls took the stand, the US attorney played by Jim Gaffigan went under oath, and even Ted Kennedy himself. And it was reading those transcripts that really formed the basis of the movie. I think that was one of the most exciting parts of the process; [it] was poring through, and finding the inconsistencies and different perspectives on the events of that weekend.”

Logan concludes: “Yeah, that was our, you know, we really wanted the truth to be our North Star, and having those court transcripts were invaluable as we dug and did the research. Because it was very important to us that we not make a conspiracy movie; that it was something where we were investigating what had actually happened, and trying to accurately portray that.”