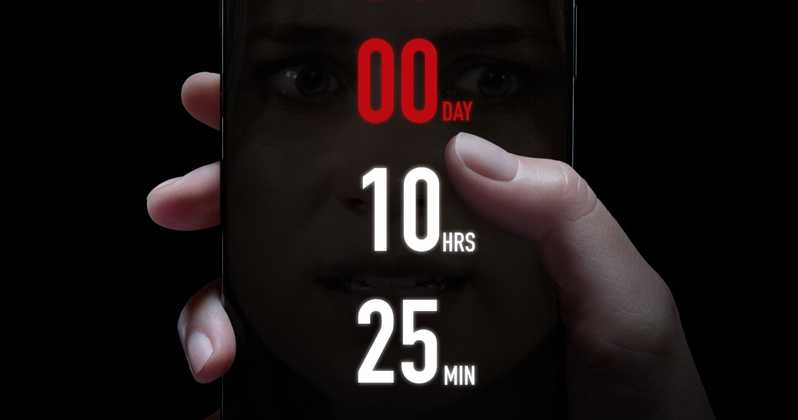 The concept of Countdown was inspired by a simple moment: setting a timer on a smartphone.

“One day the idea just popped into my head: What if this timer is ticking down to when I die?” says first-time feature film director Justin Dec, who also wrote the screenplay “It’s probably not a normal thought, but something just clicked.”

Dec saved every penny he made from working as a production assistant and in 2016 was able to call in favors to get the five-minute short Countdown made in only two nights.

Read Q & A with Justin Dec

He submitted the short about a demonic app that tells you when you will die to many film festivals. He also sent the short to his mentors Sean Anders and John Morris and the filmmakers had unexpected feedback: They asked him to stop sending it out because they wanted to turn the five-minute short into a feature film.

“On one level it made me laugh because it’s this idea of a killer app,” says Anders. “It was so well-executed; my wheels started turning as to what kind of movie it could be.”

Like many in the industry, Dec started his career working nearly nonstop as a production assistant, and in 2008, met Sean Anders and John Morris on the set of their first film.

“There are always certain young people who stand out and become your goto’s to get things done; Justin was one of those people,” says Anders. When not on set, Dec spent any free moment making movies of his own, always sending his scripts and shorts to Anders and Morris for feedback.

“We knew Justin was an aspiring filmmaker,” says Anders. “He started out much like John and I did — making films with our friends for no money.”

Seeking additional support to help bring their vision to life, filmmakers turned to John Rickard whom Anders and Morris had teamed up with on Horrible Bosses 2.

The moment Rickard heard the concept, he was quick to jump on board.

“Justin, Sean and John came to me with a wholly original idea and an incredible vision that was both high-concept and provocative,” he says. “It’s the Final Destination franchise meets The Ring — in app; it instantly drew me in.”

With Countdown, this timeless temptation of wanting to know when you will die is tied to a timely theme — the obsession with our phones — giving it the foundation for a high-concept horror film capable of pushing cultural buttons.

“We all have this relationship with our phones, so much so, that people are more connected to their phones than their families,” Rickard says. “I thought it was smart to marry the two ideas. To me, it felt like the perfect formula for a scary movie with meaning behind it.”

Schiller agreed the film could strike a nerve while also mixing fear with fun. “This film is terrifying, and it needs to be, but there’s also an element of comedy. For me, moments of levity go hand and hand with great horror, and this film does that in an exceptional way.”

For Anders, it was the premise for a fun horror movie rooted in a concept that would stick with audiences. “It’s an exciting ride with great scares that poses a very primal question, which could start a lot of conversation,” he says. “It also shines a light on how dependent we are on our devices in a highly original way by showing how they control our lives — and potentially our deaths.”

Filmmakers also saw the opportunity to have a high-concept horror movie timed to Halloween, especially when examining the theatrical landscape. “It’s a smart, scary movie that knows not to take itself too seriously — there will be nothing like it in theaters,” says Schiller.

Setting Up Scares: The Funny Thing About Horror

For filmmakers with an extensive list of successful comedy credits, Countdown proved to be an exciting new challenge.

The team first delved into the genre by studying pivotal horror films and filmmakers to learn the ropes and rules.

“Sean and John are the kind of creators who love to get under the hood of scripts, break everything down and understand the concepts and characters to find the best way to tell the most compelling story possible. In my opinion, there’s no one who does it better,” says Rickard.

During their extensive research, filmmakers found that comedy and horror shared key beats. While comedy sets an expectation and subverts it, horror establishes patterns, then surprises the audience.

“That being said, we were new to it, and we had a lot to learn along the way.” Instead of making a terrifying, unrelenting horror movie, the filmmakers sought to alleviate scares with a sense of humor.

“The premise of the film doesn’t lend itself to a relentless, gothic tale of horror,” says Dec. “Moments of intensity are followed by levity so the audience can breathe again. You’ll be scared, but you’ll also laugh. Those who find scary movies too unnerving will enjoy this film because there’s a good balance of frightening to fun.”

The film also subverts certain horror tropes — for instance, when you are dealing with a demon you need a serious, stoic priest. Father John (P.J. Byrne of The Wolf of Wall Street) took to the cloth as a fan of the Bible’s more morbid teachings. “He has this enthusiasm for the Bible and its demons,” says Anders. “That’s what I love about the character and how it was played. We were looking for opportunities like that to have some fun.”

App-solutely Terrifying: We All Have Demons

A pivotal part of the film was ensuring the demon summoned if we choose to cheat death was truly terrifying.

“You can learn your fate and you can die a natural death, but if you take that information and try to change your fate, you’ve broken the rules — and you’re his,” says Dec. “He’s a hunter who enjoys the chase and wants every second until your last to be a nightmare.”

The filmmakers chose to slowly reveal the demon to create a sense of suspense, starting with a shadow until you see more features of an evil that feasts on souls.

As part of the chase, the demon also feeds on the fears we never speak of — the inner demons that eat away at us. While Quinn (Elizabeth Lail) appears to have her life together, she has ghosts lurking under the surface. Quinn blames herself for the loss of her mother and the strain it has caused her family, especially with her younger sister Jordan.

“Clearly, Quinn was expected to take on a motherly role within her family, but she’s focusing on creating a life for herself,” says Dec. “We all have these demons inside that we bury, and for Quinn, this is inhibiting her from having a close relationship with her family. This is already haunting her by the time she downloads the app.”

Quinn takes her family for granted, rarely speaking with them. When she attempts to reconnect with those she loves after downloading the app, something worse than death is quickly coming for her and she realizes it might be too late. “A central theme of the movie is you only have so much time with the ones you love,” says Rickard.

“Cherish those moments because you never know when your time will run out — so put down the phone.” More than anything, filmmakers wanted to take audiences on a nonstop thrill ride. “You’ll jump, you’ll laugh, you’ll be scared,” says Dec. “It’s a fun, fast, entertaining ride that grabs you in the first frame and doesn’t let you go — that was the goal.”

As for if Dec would download an app like Countdown? “No way,” he says. “I prefer to live obliviously unaware.”