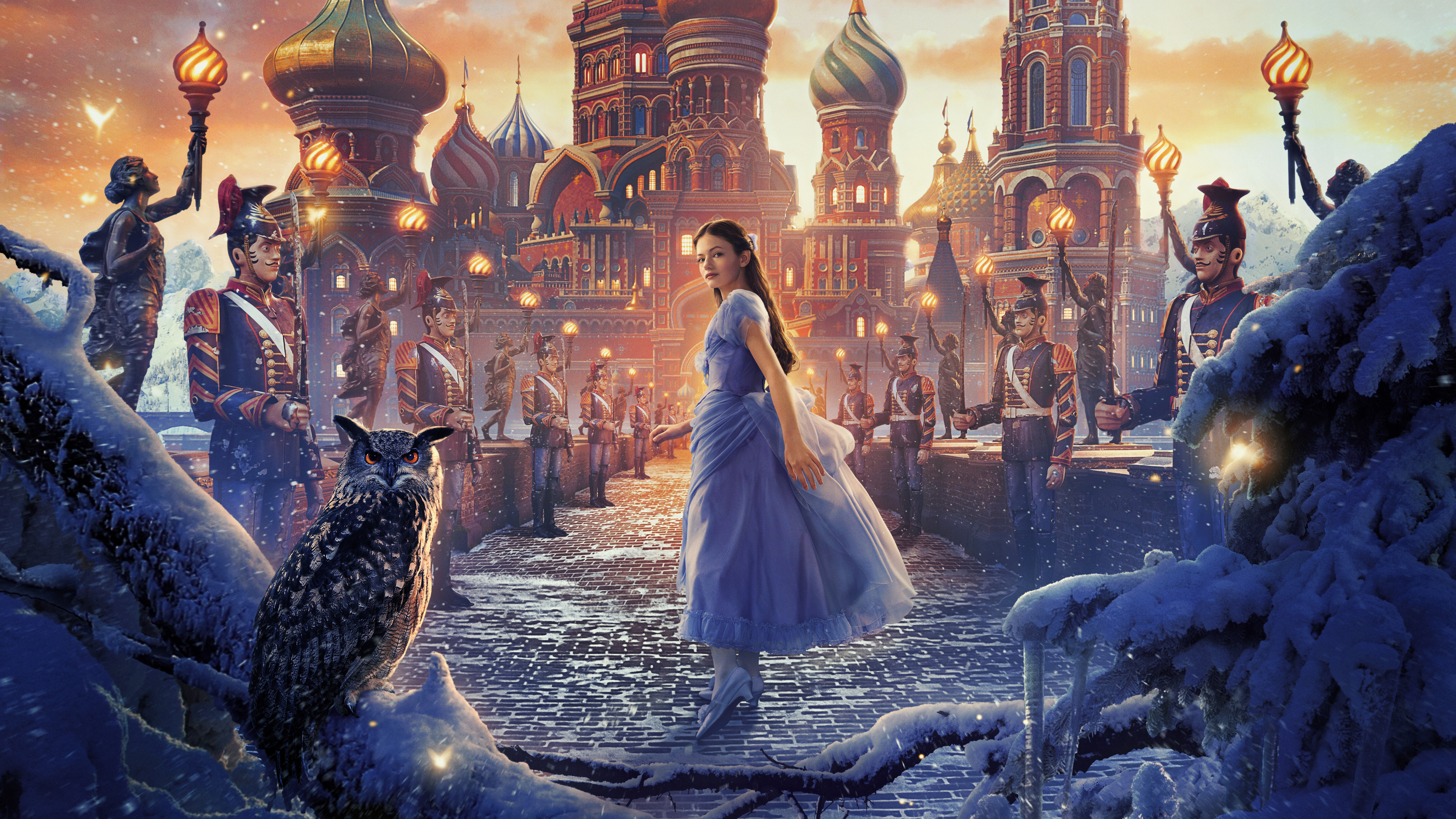 There is majesty. There is magic. There are mice. And Sugar Plum Fairy is most deﬁnitely delicious. But this is not the Nutcracker you know.

“The Nutcracker” has long conjured images of holiday décor, a wooden toy soldier, dancing ﬂowers and a little girl being terrorized by furry mice.

Penned in 1816, E.T.A. Hoﬀmann’s original story, “The Nutcracker and the Mouse King,” has inspired imaginations worldwide, resulting in spectacular stage adaptations that have charmed audiences for generations—and now an epic big-screen adventure, Disney’s The Nutcracker and the Four Realms that will be released in South-Africa on 2 November, 2018.

“The story has changed a lot throughout the course of history,” says Lasse Hallström, who co-directs with Joe Johnston. ” Disney’s feature-ﬁlm adaptation. “Alexandre Dumas’ version was less scary, and later became a ballet featuring music by Pyotr Ilyich Tchaikovsky. The ballet is unique with each staging, evolving within the minds of those creating it. And we’ve done the same thing. We’re adding to the story.”

The ﬁlmmakers behind “The Nutcracker and the Four Realms” relished the idea of reinventing a time-honored story. According to producer Mark Gordon, the characters from the existing short story and the ballet were already so iconic, they had to dig deep to take them to new heights. “The characters in this ﬁlm are very special and imaginative,” says Gordon. “Clara, who is carrying a heavy emotional burden, encounters incredible personalities on her journey—each designed to help her ﬁnd the answers she needs—whether they want to or not.”

Disney’s The Nutcracker and the Four Realms introduces Clara, an intelligent 14-year-old with a penchant for science.

Ashleigh Powell (Screen Story and Screenplay By) has been writing stories since the second grade. Thanks to her parents, who thought it was totally acceptable for a 10-year-old to read Stephen King and watch “The X-Files,” she developed a deep passion for all things sci-ﬁ-fantasy and supernatural. Born and raised in Virginia, Powell loves world building and mythology creation, and crafting stories with complex female characters at their core. She is currently adapting YA novel “The Hazel Wood” for Sony.

According to screenwriter Ashleigh Powell, Clara isn’t really comfortable in her skin. “She’s kind of a ﬁsh out of water,” says Powell.

“She doesn’t ﬁt into the normal stereotypes of a Victorian girl—she’s not interested in fancy dresses and the like. She’s more of a tomboy. She likes creating and building and ﬁguring out how things work. In that respect, she’s very similar to her godfather, Drosselmeyer, so they’re kindred spirits.”

But Clara struggles with the recent passing of her mother. “It’s the ﬁrst Christmas that her family is spending without Marie,” says Powell. “And her mother has left behind Christmas presents for Clara and her siblings, which sets everything into motion.”

Clara receives an egg-shaped music box with a note that reads, “Everything you need is inside.” But the box is locked and, surprisingly, there is no key. Clara is disappointed and confused, but determined to unlock the music box and the secrets it holds. Her confusion persists until a golden thread, presented to her at Drosselmeyer’s annual holiday party, leads her to the coveted key—which promptly disappears into a strange and mysterious parallel world. It’s there that Clara encounters a soldier named Phillip, a gang of mice and the regents who preside over three realms: Land of Snowﬂakes, Land of Flowers and Land of Sweets. She is welcomed with open arms by the regents, particularly Sugar Plum Fairy, who conﬁdes that she was once very close with Marie.

But this strange new world is not whole. It is scarred with past conﬂict—one regent is in exile, her realm forgo en and crawling with mice who serve as her soldiers. Clara and Phillip must brave this ominous Fourth Realm, home to the regent-turned-tyrant Mother Ginger, to retrieve Clara’s key and hopefully return harmony to the unstable world.

Director Joe Johnston’s ﬁlm career kicked oﬀ as a student at Cal-State Long Beach when he answered an ad on a ﬂyer posted by John Dykstra, a CSULB alumnus and visual eﬀects supervisor for George Lucas. Johnston went on to work on the original Star Wars trilogy as designer, art director and storyboard artist, and—at Lucas’ suggestion—attend USC School of Cinema c Arts.

“‘The Nutcracker and the Four Realms’ is the best kind of Christmas story,” says director Joe Johnston. “It’s exciting,  dramatic, heartwarming and life-aﬃrming. With a posittve message of a family’s love giving them the strength to overcome loss, and the theme of embracing your own courage and resourcefulness, it’s a great family ﬁlm for the holiday season.”

“There’s real heart to the story,” says producer Mark Gordon. “In our story, Clara is really struggling with the loss of her mother. Her journey through the grief leads her to this very magical world that challenges her at every turn. She really has to pull herself together to save the land and to solve the mystery her mother left for her.

In “The Nutcracker and the Four Realms,” Clara—who’s desperate to ﬁnd a special key that will unlock a gift from her late mother—ﬁnds herself on an extraordinary journey in a parallel world. This world is both baffling and beautiful, ﬁlled with magical lands and intriguing inhabitants—all of which were created thanks to the imaginations of a team of artists, technicians and designers.

The Nutcracker story is well-known around the world, but when Guy Hendrix Dyas ﬁrst read the script for “The Nutcracker and the Four Realms,” he didn’t ﬁnd it at all familiar. “What really sparked my imagination was the fact that it was extremely original,” says Dyas. “It’s a really exciting world divided into concise visual areas—from the Palace and its nod to Land of Sweets, Land of Snowﬂakes and Land of Flowers to the mysterious Fourth Realm that was a little ambiguous and very intriguing.”

The holiday backdrop of the ﬁlm elevated the magic, inspiring ﬁlmmakers to lean into seasonal décor within the real-world environments. “We wanted to create every child’s fantasy of what Christmas is,” says Dyas. “Every crew member was asked to search their inner child. There were some classic notions and some unusual ideas.”

The movie is set in 1879 London, during the Victorian era. “But our world isn’t the depressing Dickensian Victorian era,” says Dyas. “It’s an optimistic version, although the Stahlbaums are dealing with the loss of Marie, their beloved wife and mother. That struggle becomes the springboard for Clara, our main character’s journey of self-discovery.”

As principal dancer for American Ballet Theatre, Misty Copeland has danced on stages around the world. But “The Nutcracker and the Four Realms” was special. “It’s really a dream come true to be part of a story that means so much to me and is such a big part of why I started dancing,” says Copeland

“‘The Nutcracker’ inspired my daughter to take up dancing,” says director Lasse Hallström, who has always admired the music of Pyotr Ilyich Tchaikovsky. “This ﬁlm combines all of the best ﬁlmmaking elements—drama, comedy, music, special eﬀects and dance. It was a heavenly experience.”

In the movie, Clara journeys to the Four Realms in search of a key to unlock a gift from her late mother, Marie. But when she meets the regents from three of the realms, she learns that her mother has a special connection to the parallel world. As the daughter of Queen Marie, Clara is instantly revered and the regents decide to host a grand pageant in Clara’s honor. Presented on a spectacular stage the places Clara and the regents in the middle of the performance, the elaborate pageant tells the tale of the Four Realms through dance.

The mysterious and monstrous presence lurking in the Fourth Realm is Mother Ginger’s most fearsome and terrible lieutenant. “We needed a very scary villain, but it was a challenge,” says screenwriter Ashleigh Powell. “We wanted to create a giant mouse that didn’t seem absurd or silly.”

Music played a key role in bringing “The Nutcracker and the Four Realms” to life, thanks to composer Peter Ilyich Tchaikovsky, who was behind the music that helped make “The Nutcracker” ballet an international sensation. “The music has always been fascinating to me,” says director Lasse Hallström. “I listened to the Nutcracker Suite on the radio as a young kid and it was a compelling title for a piece of music.”

Composer James Howard was tapped to create the score, featuring world-renowned pianist Lang Lang. It was recorded by the Philharmonia Orchestra in London with conductor Gustavo Dudamel. Plus, the soundtrack features a new end-credit single by pianist Lang Lang, as well as the single “Fall on Me” by Andrea Bocelli and his son Matteo Bocelli.