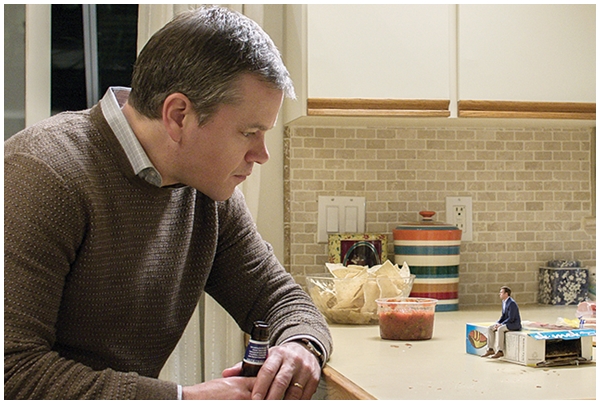 A bittersweet sci-fi adventure about an every-man given a second chance to live a meaningful life on his own terms.

The mind bending Downsizing imagines what might happen if, as a solution to over-population, Norwegian scientists discover how to shrink humans to five inches tall and propose a 200-year global transition from big to small.

People soon realize how much further money goes in a miniaturized world. With the promise of a better life, everyman Paul Safranek (Matt Damon) and wife Audrey (Kristen Wiig) decide to abandon their stressed lives in Omaha for a new downsized community, taking the irreversible leap that will trigger life-changing adventures when they become small.

That is how Matt Damon sizes up the story Director Alexander Payne co-wrote with Jim Taylor that drew him to the dystopian dramedy for our times, a bittersweet sci-fi adventure about an everyman given a second chance to live a meaningful life on his own terms.

Alexander Payne grew up in Omaha. He studied History and Spanish Literature at Stanford before earning an MFA in Film at UCLA.

He has made seven feature films— Citizen Ruth (1996), Election (1999), About Schmidt (2002), Sideways (2004), The Descendants (2011), Nebraska (2013) And Downsizing (2017). He has won two Oscars for Best Adapted Screenplay. He serves on the boards of the Film Foundation and Film Streams, a cinematheque in Omaha. Four of his six feature films were filmed in Nebraska, where he continues to live, dividing his time between there and Los Angeles.

It was actually Jim Taylor and his brother, Associate Producer Douglas Taylor, who came up with the initial concept.

“Doug imagined a process where you could shrink people and then ran the numbers to figure out things like how many tiny people you could feed with one hamburger,” recalls Jim. Kicking around the notion of less is more as the means to becoming a millionaire, their banter soon transformed into “an interesting premise for a movie.”

Born and raised in the suburbs of Seattle, Jim Taylor (Writer/Producer) received a BA in creative writing from Pomona College and an MFA in filmmaking from NYU’s Tisch School of the Arts.

Jim is the long-time collaborator of writer/director Alexander Payne.  Among the screenplays they have co-authored are Election, About Schmidt and Sideways.  For their work on these scripts they have been honored with two Golden Globes, two Writers Guild Awards and one Academy Award.

Payne began to stretch the context of that premise. “We reasoned that downsizing would become an international trend, so Jim and I wanted to give some sense of how it’s happening around the world, not just how it was affecting America,” he says. “Everything else started unfolding from there.”

Broadening the boundaries of the narrative’s scope meant emphasizing the universal nature of the film’s themes. “Our heroes are American, Vietnamese and Serbian. In the film, you’ll hear English, Vietnamese, Serbian, Spanish, Norwegian, Greek, Korean, Tagalog, Arabic, French and just for a moment, you’ll see American Sign Language,” he adds. “We didn’t set out to be a movie with lots of languages, but it served the story and the idea that Paul’s world gets bigger once he makes the choice to become smaller.”

Adds Taylor, with “Downsizing we were interested in making a film that was more outward looking than some of our other films. We’ve always been drawn to the part of human nature where we blame other people for our own problems as opposed to taking responsibility.”

Alexander Payne films “aren’t about car chases or bank robberies. They are defined by their characters,” notes Producer Mark Johnson. “They’re about decent characters trying to do the right thing, and while the world of Downsizing is larger in scope than his previous films, it’s ultimately a character piece. I’ve never read anything like it. I expected it to be funny and while there is a certain amount of absurdity to it, I never expected it to be as emotional as it is. It’s a great foray into comedy and drama, and a love story, very intricate. The beauty of a film like Downsizing is that it can’t be described in a sentence or two.”

When audiences meet Paul, he is an in-house occupational therapist at Omaha Steaks who helps people with repetitive injuries, “just a very good, conscientious guy who married pretty early,” says Damon of his character. ”Kristen (Wiig) plays my wife Audrey. You get a complete picture of who her character is very quickly.  They can’t quite make it in Omaha.  This idea of downsizing starts to look more and more appealing. One thing after another starts to convince them maybe this is for them. (Paul) feels somewhat responsible for Audrey. He tends to just cave and give her what he knows she wants, even if it isn’t necessarily the right thing for him. He’s always taking care of other people at a cost to himself. It’s in his character to be helpful. He’s one of those nice guys that’s taken advantage of constantly, in small ways and big ways, because everybody sees him for what he is.”

Damon continues: “He knows Audrey’s not happy. He’s told you can’t buy this house. Your credit isn’t good enough, put a bigger down payment down. He hung in and did the right thing like he always does. Now he doesn’t have the career he wanted. He knows he’s a disappointment to Audrey.”

He and Audrey, like most people curious about downsizing, “realize pretty quickly that at five inches you can actually consume much more, have a 6,000 square-foot house and two acres the size of a coffee table,” muses Damon. “It’s touted as an environmental benefit. Most simply want the creature comforts they couldn’t afford in the big world.”

That would include Dave, Paul and Audrey’s old classmate and de facto Leisureland recruiter.

“I approached Dave, my character, like he were a Golf Pro at a country club but also managing it,” says Jason Sudeikis, “someone enthusiastic about the amenities it has to offer.  The allure of downsizing for him are the benefits financially.”

Shortly after Paul’s entry into Leisureland, Dave throws a birthday party for his 7-year-old that’s beyond excessive, including tiny ponies with unicorn horns on their heads. Dave believes in any and all excess needed to live life to the fullest. “There’s a vacuum inside where the soul is supposed to be,” Sudeikis adds. “Paul sniffs that out and sees through the façade.”

As for the unhappy Audrey, Wiig relished playing the role.

“I feel like when you meet Audrey she’s probably not at the top of her game,” concedes Wiig. “She’s not too happy.”

Payne says he and Taylor conceived Audrey “as a nice enough person but she’s a little self-involved. Demanding.”

“I always enjoy casting funny people to play more serious parts. I was convinced Kristen could play anything. She plays the rhythm of the scene a little more brightly than an actor who might not have her comedy background.”

Because of that ability, Taylor adds, “We asked Kristen to play a complicated person that not a lot of actors would want to be, but she understood the nuances and behavior of the character in a way that was kind of mind boggling. Brilliant and funny, I admire her a lot.”

Downsizing is the second collaboration for Wiig and Damon. The two co-starred in Ridley Scott’s The Martian. “Even though we were both in The Martian, we didn’t have any scenes together so I felt a little robbed,” recalls Wiig. This film was a “double whammy. I’ve always wanted to work with Matt and Alexander.”

Wiig adds that she loves watching Alexander work. “He’s such a considerate leader and so detail oriented that it gives the actors a weird sense of safety because you know everything around you has been thought out,” she says. “When he moves on from a scene you’re doing, you generally feel like you must have got it right.”

In Damon’s eyes, his co-star is “incredible. Kristen is obviously known for her writing and comedic performances, but she’s also a dynamic actress that can strike those nuanced notes with Audrey beautifully, quickly giving you a complete picture of the character.”

To help physically embody Paul, Damon underwent a 4-hour daily prosthetic application process to transform his appearance, including the application of a prosthetic belly. “It’s actually what I look like when I’m really out of shape,” Damon confesses, laughing. “It’s perfect that it was molded to my body. I’m slowly losing the need for it!”

After Paul undergoes the downsizing procedure, he awakens to find himself abandoned and alone in this new world. Paul’s Leisureland palatial estate is reduced to a Leisureland cookie cutter condo post-divorce. Even worse, his day job has been reduced from occupational therapist to sales rep.

Thanks to his upstairs neighbor, party animal profiteer Dusan Mirkovic (Christoph Waltz), Paul has a chance to hit life’s reset button again. “He’s this crazy, obnoxious, Serbian who travels the world, plays his music too loud and is not a great neighbor,” explains Damon.

Ever the nice guy, Paul finally accepts Dusan’s invite to join the party. It is there he meets Konrad (Udo Kier), Dusan’s partner in peddling hedonistic pleasures to the well-heeled partygoers.

When Paul quizzes Dusan on the dangers of the trade, “Dusan says ‘You think people would care about a five-inch Serbian guy selling Cuban cigars?  This is the Wild West baby.’ He kind of opens my eyes to the world,” says Damon. He wants Paul to stop missing out, to jump into his new life with both feet and really experience it before it’s too late.

At the end of the film Paul finds himself once again at a crossroads in choosing the best life available to him. “You know some people are capable of change, other people are not,” reflects Payne. “Paul goes on this journey in search of a new perspective and figures out what will truly make him happy. My hope for this film is that people appreciate the craft and joy that went into it and see their world in a different way.”

Ironically, Damon finds his character’s final journey in lockstep with living now. “There’s something very timely and brilliantly satirical about a man making himself small while the Earth’s population is expanding. I think now is the right time for this film because it speaks to the world we are living in. Yes, Downsizing can be heartbreaking. But it can also be thought provoking.

“Hopefully it will live in your memory.”