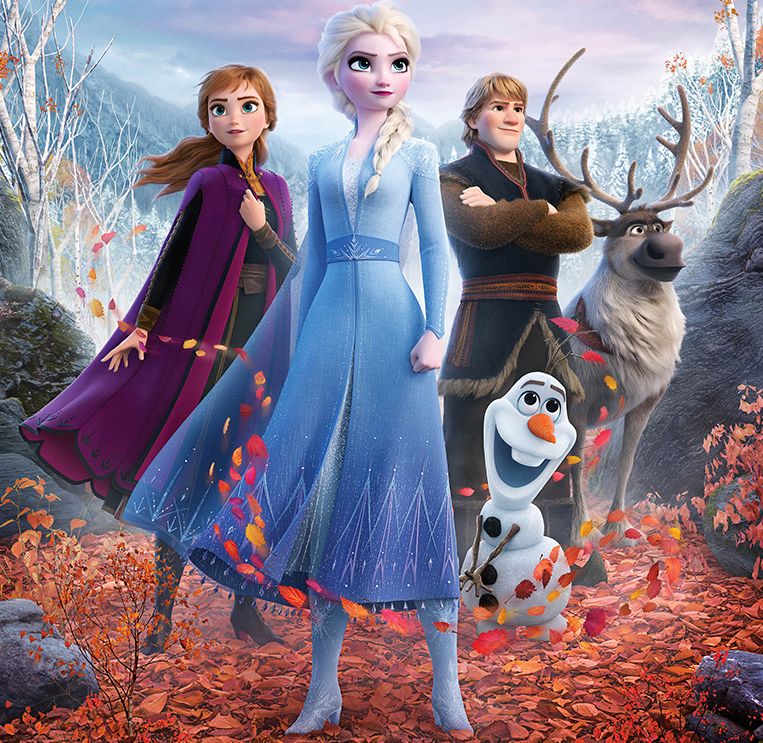 For producer Peter Del Vecho, the characters of Frozen long ago became more than characters to the filmmakers. “It’s like they are family,” he says. “They are endearing in that they are both ﬂ awed and aspirational, and there is so much more to their story. And like a lot of storytellers, we found we couldn’t get them out of our heads. We wanted to know more—go deeper in exploring this relationship between two sisters.”

“If ‘Frozen’ was happily ever after,” says director Lee, “then Frozen 2 is the day after happily ever after. Life gets in the way. It throws you curve balls. So, this is about learning to fight for your place in the world, do what’s right—all of the grown-up things you have to do. There’s s ll fun and humor, but it’s a deeply emotional story about finding out who we are meant to be.”

Elsa has a gift – the power to create ice and snow. She’s only recently learned how to control her magic, and only recently revealed her powers to her kingdom a er years of keeping them hidden for fear she’d be persecuted for her differences. “Elsa is a fascinating character with this miraculous ability to harness the power of nature,” says director Chris Buck. “Her connection to nature has always been there. But she has no idea why.”

So, no matter how happy Elsa is to finally embrace her powers and be with her sister, Anna, their friends and the people of Arendelle, she finds herself unsettled. “Elsa hears a voice calling that no one else can hear. She tries to block it, but it won’t stop. It shows her pieces of the past. It promises answers about why she is the way she is, so it’s both epic and a mystery, and she’s compelled to find that voice,” says Lee.

The answers promised by the calling also threaten the kingdom and everything Elsa and Anna ever wanted— including the bond between them. So, when Elsa faces a dangerous journey into the unknown to the enchanted forests and dark seas beyond Arendelle, Anna is determined to go with her, be by her sister’s side, and help uncover the mystery—along with Kristoﬀ , Olaf and Sven. In Frozen, Elsa feared her powers were too much for the world. In Frozen 2, she must hope they are enough.

“The world gets a little grittier for our characters—a little tougher,” says Buck. “There’s a lot of change in the movie—it’s a theme you can see within the story and even in the look of the film. Autumn reflects the maturity we see in our characters and with the change of seasons comes a beautiful new palette of rich autumnal colors we’ve never explored before. If you take a single frame from ‘Frozen,’ the colors alone would tell you that it’s ‘Frozen.’ And now, the same is true for ‘Frozen 2.’”

Much like the first film, which was inspired by Hans Chris an Andersen’s 1845 fairy tale “The Snow Queen,” “Frozen 2” embraces the tenants of fairy tales and stories within mythology that were often written to explain the inexplicable. The all-new story takes place three years a er the conclusion of the first movie: Elsa is queen and Anna is happy to have everyone she loves—Elsa, Kristoﬀ , Olaf and Sven—under one roof. The bond between sisters is strong—and anchors the story. But, according to the filmmakers, there is an underlying current of unrest and angst that ultimately leads to a great adventure—one that will bring clarity to everything we know about these characters. “‘Frozen 2’ is even bigger and more epic than the first,” says Buck. “But most importantly, in the end ‘Frozen’ and ‘Frozen 2’ work together to form one complete story.”

Filmmakers set out to deepen their understanding of their main characters in an eﬀort to uncover the answers to questions that lingered a er the conclusion of “Frozen.” They found themselves delving into the inner workings of both fairy tales and myths.

“We realized that in the first movie, we had both a myth and a fairy tale going on at the same me,” says producer Peter Del Vecho. “Elsa was definately a mythic character, which generally carries the weight of the world on their shoulders and do things the rest of us can’t. They also typically suffeer a tragic fate—which might have happened to Elsa in the first film were it not for Anna.”

Director Jennifer Lee says Anna is the fairy-tale character. “She’s the optimist,” says Lee. “These characters are only human. They’re not magical, but often enter into the dangers of a magical world. They go into the belly of the beast, suffering hardship and loss with great struggles, yet rise triumphant.”

Filmmakers Trek to Norway, Finland and Iceland to Garner Inspiration

Walt Disney Animation Studios filmmakers trekked to Africa to help populate the world of Zootopia, traveled throughout the islands of the Pacific to garner inspiration for “Moana,” and took a field trip to a racetrack to inform the Slaughter Race sequences in “Ralph Breaks the Internet.”

Research is the root of every story.

Many of the filmmakers behind “Frozen” ventured to Norway and studied ords, architecture and garb, among other areas—but since “Frozen 2” continues the story, taking Elsa, Anna, Kristoﬀ , Olaf and Sven far from Arendelle, filmmakers needed to go back.

And in September 2016, they did just that, embarking on a two-week trip to Norway, Iceland and Finland.

“We were deeply inspired by the beauty of these places,” says producer Peter Del Vecho. “It’s amazing to me how much of that research trip made it into ‘Frozen 2’: the fall colors of Norway and Finland, the waterfalls, the stark beauty of Iceland.”

Filmmakers also referenced old Norse myths and folklore of found across the Nordic lands, discovering connections to nature that led them to what would become their story. But the key to their story was discovered—at least in part—during that epic trip. Says director Jennifer Lee, “‘Frozen 2’ is ultimately a mythic fairy tale about home and family, self-discovery, courage and the power to never give up.”

The idea of myth versus fairy tale took root somewhere between Norway and Iceland. “There was a beautiful fairy-tale feel to the forests in Norway and Finland,” says director Chris Buck. “Iceland was different. It felt dangerous—mythic. We felt small there. Nature was definitely in control in Iceland.”

Another major theme in the story, change, is illustrated by the autumn setting of the film. So, the September timing of their travels was strategic in an effort to envelop the filmmakers in the unique foliage that Anna and Elsa might find on their adventures.