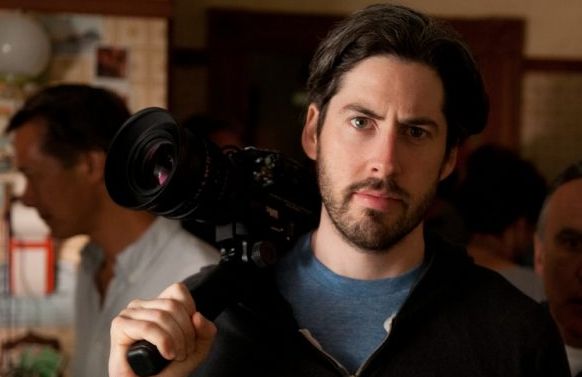 Jason Reitman was just six years old when his father, the director Ivan Reitman, brought him to the set of Ghostbusters in 1984. That six-year-old boy grew up to go into the family business and became an acclaimed filmmaker with his Oscar-nominated direction for Juno and Up in the Air. As director and co-writer he now brings us the next chapter in the original Ghostbusters universe: Ghostbusters: Afterlife.

“I remember being on the top of Dana’s apartment building,” says Jason Reitman. “Before anyone knew what a terror dog was or what a proton pack was, I was watching a stunt man get pelted with shaving cream as the Stay Puft Marshmallow Man exploded. I went home with a little piece of marshmallow man that sat on my shelf through high school.”

With a sensibility that centred on the comedy of intimate relationships, especially families, Jason Reitman has built a filmography with a very different sensibility than the comedies that made Ivan Reitman famous.

When Jason was asked whether he would ever make a Ghostbusters movie, he would poke at that difference wryly: “I think I said, ‘There would be no busting,’” he laughs. “I don’t think my father ever expected me to come to him with a Ghostbusters story. We had gone on our storytelling paths – I thought of myself as an independent filmmaker.”

Roughly ten years ago, Jason’s experience of being “the world’s first Ghostbusters fan” raised its spectral head, as he was struck with a vision of a particular character. “It was a 12-year-old girl who finds a proton pack in a barn,” he explains. “And like many ideas I’ve had, I didn’t know why it just showed up.”

Jason says the concept stayed with him, and like any idea worth exploring, the story eventually demanded to be told. “When Harold Ramis passed, I suddenly knew who this girl was… she was Egon Spengler’s granddaughter. That was the story I wanted to tell – the story of a kid who finds this proton pack and discovers who she is, what her legacy is, and why she’s unique.”

It would be a Jason Reitman Ghostbusters story – a passing of the torch within and without. With the younger Reitman directing and his father producing, Jason would make a film that honoured the franchise that came before as it stood on its own and pointed toward the future. Within the film, Jason would bring the story full circle, weaving a family theme into the fabric of the franchise. “I wanted to make a movie that was as much for my father as it was for my daughter,” he expresses. “I wanted to tell a generational story about a single mom with two kids who don’t know their identity and find out that they are quite special.”

When Jason approached his father with the idea, the elder Reitman embraced the approach as a perfect hybrid of their sensibilities. “Jason has a great love of the film and all of its iconography – that came through in every word on the page,” says Ivan. “The script made me cry the first time I read it. It captured the spirit and joyfulness of the first movie. He had a real sense of where he wanted to go with it – his idea to bring his vision to a scale movie like Ghostbusters, to funnel a family story through the large, world-saving concept of Ghostbusters, seemed like a good thing.”

It’s not so far-fetched that the torch could be passed in that way, according to the Reitmans.

“Before 1984, superheroes were a stalwart set of all-American heroes – serious about what they were doing,” says Ivan. “These guys, the Ghostbusters, were a little bit anti-establishment and had senses of humour. It made them much more accessible.”

“I don’t think we all believe we can be Superman, but I do think we believe that we can be a ghostbuster,” adds Jason. “Ghostbusting has always been an opportunity for outsiders to have moments of heroism.”

“It’s Jason’s vision and his father’s before him,” says Jason Blumenfeld, who has worked with Jason Reitman as both a producer and first assistant director for the past 15 years. “It’s an incredible love letter to his dad, the original Ghostbusters, and the fans.”

When Jason Reitman had completed the screenplay with Gil Kenan, there was one more intimidating hurdle to clear: approaching Dan Aykroyd, who co-wrote and starred in the original Ghostbusters, for feedback on the story.

“There was probably nothing scarier than sending Dan Aykroyd the script of this film,” he says. “I mean, here’s the guy who came up with the original idea of ghostbusting. And I was curious what his notes would be like and whether or not they would feel as though they were in the same voice as the originator. And, boy, were they. It was like receiving notes from Ray Stantz – all that odd and humorous ghost-speak and Lovecraftian dialogue is so true to who he is. It’s completely inspiring. You can feel all the science fiction and fantasy he grew up reading in everything he says and the way that he talks about actual ghosts.”

“Jason is an incredible filmmaker – a great director. He’s full of heart, and joy, and spirit,” says Aykroyd. And he just came up with this great story – he connects to the first two movies, then takes us out of it completely and to somewhere new.”

What makes Ghostbusters… Ghostbusters? What was the magical combination of comedy and scares, tone and story, performances and effects, songs and score, that added up to a film that was popular in its own time and remained high in memories?

More specifically, for Jason Reitman, the question was: what was the best way to make a Ghostbusters movie – one that felt like a Ghostbusters movie, the next chapter from the two original films? With his father Ivan at his side as a producer, Jason knew who he was gonna call.  “What we wanted was to make a completely nostalgic experience, something that puts you right back into what it felt like to watch the original movie in 1984,” he recalls. “So, we’re using all kinds of techniques my dad and his crew employed back in ‘84. This should feel like an old family recipe because it is.”

At the centre of Ghostbusters: Afterlife is a small family: single mom Callie (Carrie Coon), her 15-year-old son Trevor (Finn Wolfhard), and her 12-year-old daughter Phoebe (Mckenna Grace). After they are evicted from their Chicago apartment, the family moves into a ramshackle Oklahoma homestead – a dirt farm, really – that had been owned by her recently deceased father, a man she had no memory of.  As it turns out, that father was none other than Egon Spengler, who had mysterious reasons for moving from his Manhattan home to rural Oklahoma.

These characters exist in the present-day – decades after the events of 1980s Manhattan, which have been long forgotten. “Ghosts have not been prevalent for decades,” notes Jason. “The original Ghostbusters have not been thought about. The idea is if you had been born in the early 2000s, you probably don’t even know about it or maybe you’ve just briefly heard about it. It’s not a part of your everyday life.”

Jason Reitman (Director / Co-Writer) is an Academy Award®-nominated filmmaker. He made his feature film debut with the 2006 Sundance hit Thank You for Smoking, for which he won the best screenplay at the Independent Spirit Awards. He notably earned Academy Award® nominations for directing Juno and Up in the Air, the latter of which earned Reitman a WGA Award and BAFTA Award for Best Screenplay. Reitman continued his collaboration with screenwriter Diablo Cody on the critically acclaimed Young Adult and Tully, both starring Charlize Theron. His most recent film is The Front Runner with Hugh Jackman. As a producer, Reitman oversaw four seasons of the Golden Globe-nominated Hulu comedy series “Casual.” He also produced the Academy Award®-winning film Whiplash, Jean-Marc Vallee’s Demolition, and the cult hit Jennifer’s Body, by director Karyn Kusama. In 2010, Reitman co-created the Live Read series with Elvis Mitchell, which ran for five seasons at LACMA, where he also sat as an artist-in-residence. In 2020, during the height of the COVID pandemic, Reitman created and directed the “Home Movie Princess Bride,” raising a million dollars for World Central Kitchen.

An Academy Award®-nominated filmmaker, GIL KENAN (Co-Writer / Executive Producer) studied at the film division of the University of California, Los Angeles, where he received a Master of Fine Arts degree in animation in 2002. Kenan has directed films such as Monster House, City of Ember, Poltergeist, and the soon to be released A Boy Called Christmas. For Monster House, Kenan was nominated for an Academy Award® and Golden Globe for Best Animated Feature. A Boy Called Christmas, which Kenan co-wrote and directed for Netflix and Studiocanal, stars Kristen Wiig, Maggie Smith, Michiel Huisman, Jim Broadbent, Stephen Merchant, Zoe Colletti and Toby Jones, and is set to release worldwide this November.