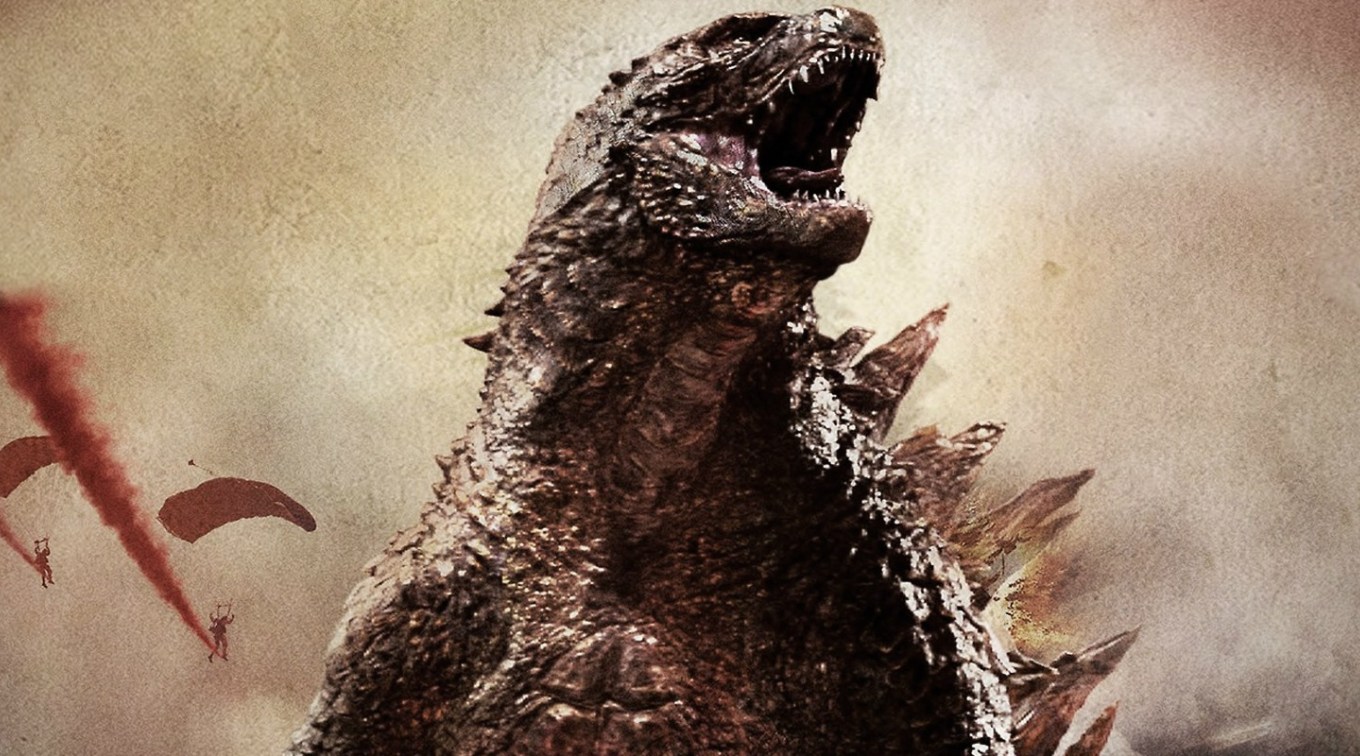 Following the global success of Godzilla” and“Kong: Skull Island” comes the next chapter in Warner Bros. Pictures’ and Legendary Pictures’ cinematic Monsterverse: Godzilla II: King of the Monsters, an epic action adventure that pits Godzilla against some of the most popular monsters in pop culture history.

Director/co-writer Michael Dougherty brings together some of the biggest, baddest monsters in big-screen history, realized without limits for the first time in the modern age, in an epic, globe-spanning battle royale for the future of the planet that links the fates of monsters and man.

Dougherty crafted the screenplay with Zach Shields, from a story by Max Borenstein and Michael Dougherty & Zach Shields, based on the characters Godzilla, King Ghidorah, Mothra and Rodan owned and created by Toho Co., Ltd.

The film brings together some of the biggest, baddest monsters in big-screen history, realized without limits for the first time in the modern age, in an epic, globe-spanning battle royale for the future of the planet that links the fates of monsters and man.

“Godzilla has always had a sense of mythic purpose,” says Dougherty, the lifelong fan at the helm of “Godzilla II: King of the Monsters.”  “Godzilla movies are big, they’re fun, but underneath all the monster mayhem and apocalyptic destruction, these movies are allegories.  That’s how the Japanese initially invented and portrayed the character, and I think it’s one of the reasons Godzilla has endured for as long as he has.”

The new story follows the heroic efforts of the crypto-zoological agency Monarch as its members face off against a battery of god-sized monsters, including the mighty Godzilla, who collides with Mothra, Rodan, and his ultimate nemesis, the three-headed Ghidorah.  When these ancient super-species—thought to be mere myths—rise again, they all vie for supremacy, leaving humanity’s very existence hanging in the balance.

From his explosive 1954 awakening to his epic 2014 rebirth, Godzilla has always been more than a monster. A destroyer, a savior, an icon, a King, he has evolved and reinvented himself through decades of social, political and ecological change from a walking natural disaster to nature’s last, lone Samurai.

“These are popcorn movies,” the director continues, “but they are filled with metaphor.  And though the themes have changed over the years, they all leave you with the same warning: that if you push too hard against nature, nature’s going to push back.”

“This film truly puts you in the path of these monsters,” says producer Mary Parent. “When you look up and see them filling the screen and hear the theater-shaking thunder of their roars, you feel the presence of these creatures in a visceral, powerful way. This is a movie that needs to be seen on the biggest screen possible.”

“I think it’s a big old popcorn extravaganza,” cast member Kyle Chandler attests.  “Mike came in with a pretty stunning vision of a world overrun with 500-foot-tall monsters and a story that makes you care about what’s happening to the humans at their feet, and I’m very excited to see them mesh together.  My great expectation for the film is that people sitting in the theater will look up at this vast world and believe it could actually exist.”

“This movie is a veritable cacophony of crazy, ancient super-species and people will feel the action and adventure and have that adrenaline rush,” adds his fellow castmate Vera Farmiga.  “But it’s also important to tell a story that resonates, and I think this is a story that does.  That’s why Godzilla is still such a powerful figure.  He shines a light on real things.  What’s not to love about an atomic-breathing, 800-megaton monster who makes us feel all too human?”

In the aftermath of World War II, Japan’s The Toho Co., Ltd. assembled a team of Japanese filmmaking legends to create a new kind of monster.

Willed to life through a latex-and-bamboo monster suit, a meticulously engineered 1/25th scale model of Tokyo and masterful filmmaking, Godzilla roared onto the screen in Ishirō Honda’s genre-defining masterpiece “Gojira,” and has resonated and reverberated through the global cultural imagination ever since, cementing his place as one of the greatest, most resonant and original creations ever put to film.

Godzilla’s global footprint kicked open the door for Toho to unleash a universe of gigantic creatures in a series of films that would launch the kaiju eiga genreand enthrall and entertain generations of fans.  But apart from Godzilla, none other has been realized on the big screen outside of Japan.

Having successfully launched an all-new cinematic Monsterverse with the blockbusters Godzilla in 2014, directed by Gareth Edwards, and Jordan Vogt-Roberts’ Kong: Skull Island three years later, the producers knew it was time to deepen the bench.

“Mothra, Rodan and King Ghidorah are three of the most popular creatures in the Toho universe,” producer Alex Garcia states.  “So when we started putting together our second ‘Godzilla’ film, we knew how exciting it would be for fans to see them brought to life in all their glory, to duke it out with Godzilla within the grounded, real-world environment we established with the first two films.”

At the same time, Garcia acknowledges, it was also daunting.  “These are timeless, beloved characters who have been embraced by fans all over the world.  So to bring them to life in an original story, with a new tonal approach, is always a leap of faith.”

To stick the landing, they’d need a filmmaker at the helm with a vision big enough to widen the lens on the contemporary Monsterverse combined with the passion and appreciation of a Godzilla superfan.  Fortunately, they didn’t have to look far.

Michael Dougherty had recently made a film with Legendary—the dark Christmas tale “Krampus”—and his affinity for Godzilla was hard to miss.  “Michael still has this 18-inch Godzilla toy that he got when he was a kid,” Garcia laughs.

When Dougherty was barely old enough to walk, a startling vision roared to life on his living room TV—a body-slamming, blue-fire-breathing superhero with a heart-rending, ear-shattering roar.  “He was a dinosaur unlike any dinosaur I’d ever seen,” Dougherty recalls.  “He wasn’t even a dinosaur, really; he was an ancient creature pitted against the modern world.  I just became obsessed with Godzilla.  I’d draw him in the margins of my notebooks and add him to the illustrations in my grade school Bible, much to the chagrin of the nuns.”

After that, nothing would be the same—not movies, not monsters and not Dougherty himself.  “I was a mixed-race kid growing up in Columbus, Ohio,” he shares.  “So to discover these amazing movies about giant monsters that were made by Japanese people…that meant the world to me.  He became this weird security blanket for me because he was so strong and so powerful, and yet there’s a consciousness and wisdom to him.  So Godzilla has been a very good friend for a very long time.”

Dougherty even credits the Big Guy with inspiring him to become first an animator and then a filmmaker.  “When I was around ten years old, my family brought home a Betamax camcorder and all I wanted do was make a Godzilla movie, which ended up being a crude but effective stop-motion film of my trusty Godzilla Shogun Warrior toy rampaging through my action figures.  Occasionally assisted by my pet box tortoise, Tony,” he adds with a smile.

In addition to his childhood love of dinosaurs, Godzilla resonated with Dougherty’s lifelong affinity for dragon lore.  “My mother is Vietnamese and I also have Irish and Hungarian roots, so I grew up reading all the various dragon myths from both the East and the West,” he says.  “And as a kid watching Godzilla movies, I felt like I was seeing those stories come to life.  I didn’t see men in rubber suits destroying scale-model cities.  I saw ancient, powerful, mythic beings battling for dominance and fighting out old grudges.”

For the director and his longtime writing partner Zach Shields, that link became the key to cracking open a larger universe: one big enough to contain a world-shattering deathmatch between not one but four colossal creatures.

“For Mike, that connection was always there,” offers Shields, who in addition to co-writing the screenplay is also an executive producer on the film.  “For me it was a new exploration, for Mike it was in his DNA.  Our differences were our strength in molding this gigantic legacy into our own mythology.  And what was amazing was that the more we teased it out, the bigger it became. We wanted to tell this story on an Old Testament Biblical scale—fire and brimstone and nature at its height—and mythology gave us a canvas that was vast and deep enough for the Holy Grail of monster showdowns.”

With free rein to explore a Monsterverse filled with possibility, the writing team came back with a vision that surprised even its longtime shepherds.  “Mike and Zach found a way to bring Rodan, Mothra and Ghidorah into this world that was so organic, it was as if they had always been there,” Garcia relates.  “The story dovetailed perfectly with our far-reaching plans for where we want to take these films, but it’s a much bigger, more global adventure than anything we’d ever seen.”

Adds Parent, “‘Godzilla II: King of the Monsters’ delivers everything you want from a big, fun giant monster movie—timely themes, characters you cheer for, and some of the most monumental battles ever put to film.  We wanted to honor the essential elements that have captivated fans around the world while creating a fresh, new experience that will deliver the power, wonder and pure excitement of these badass Titans to a new generation, and Michael has done it.”

“This movie could not have been in a non-fan’s hands,” says cast member and lifelong fan O’Shea Jackson, Jr.  “Godzilla means so much to the people of Japan, we must treat him with the utmost respect and do right by him.  And when I finally did get to see our Godzilla, I was like, ‘yeah, they did him right.’”

The quest to make Godzilla, Mothra, Rodan and Ghidorah live again on the big screen fueled an epic collaboration that brought together a legion of creative collaborators—many propelled by their own connection to the seminal Toho creations—and kicked off a sprawling production that would open out the Monsterverse and bring the secret government agency Monarch into the light.

“We followed in the footsteps of what Gareth and Jordan had done on ‘Godzilla’ and ‘Kong: Skull Island’ to establish and deepen this world as much as they could,” Shields reveals.  “But there’s always more territory to discover with these ancient creatures and Monarch.  And, for us, exploring the secret world of Monarch was total wish fulfillment.  Like stepping behind the locked doors of Area 51, but for giant monsters, or Titans as they’re known at Monarch.  I mean, who wouldn’t want to know what an outfit like that is hiding.  And when you enter their labs and see how much money is being funneled into this operation, that tells you how seriously world powers and private interests are taking this threat.  The wolf is at the door, and Monarch is the thin, blue line.  After that, there’s only Godzilla.”