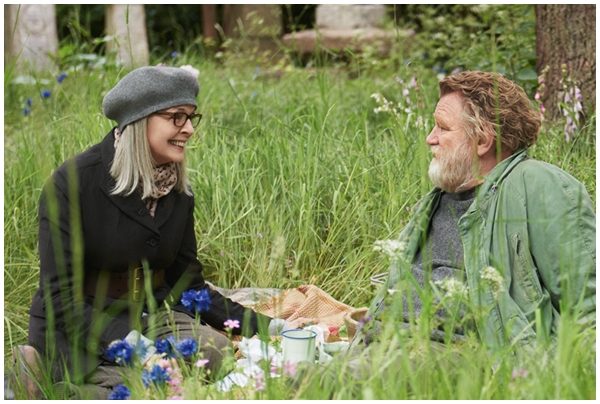 A tale of two radically different people living is a small, but extremely beautiful corner of London, showing that love can blossom in the most unlikely of circumstances.

Inspired by a true story, Hampstead is a charming and funny life-affirming tale about how love can be found in the most unexpected places and proves once and for all that age is no barrier to second chances.

The story takes place in the picturesque setting of Hampstead Village, a refuge of greenery amidst the hustle and bustle of London. It is famous for its beautiful and much-loved Heath; a piece of quiet countryside in a vast metropolis.

Living on the edge of the Heath is American widow Emily Walters (Diane Keaton), who can’t quite focus on the things that need attention since her husband’s death; like her crumbling old apartment, diminishing finances and even her son, Philip (James Norton).

Donald Horner (Brendan Gleeson) has lived quietly and harmoniously on the edge of the Heath for 17 years but his lifestyle is under threat – his home is the target of property developers who’ve started using heavy-handed tactics to remove him.

Hampstead is the latest film from BAFTA-winning director Joel Hopkins (Last Chance Harvey), written by Robert Festinger (In the Bedroom) and produced by by Robert Bernstein and Douglas Rae of London-based production company Ecosse Films.

“It’s a contemporary story, that on the surface sees two very different people find love in unlikely circumstances. One is living on the Heath leading an alternative lifestyle, and the other is a lady who lunches, living in a big mansion block overlooking the Heath. They seem the most unlikely of couplings, but this story is about how these two characters come together against the world,” says producer Robert Bernstein.

The film’s origins lay when the news story ran about Hallowes back in 2007, this led Bernstein to contact screenwriter, Robert Festinger, who was fascinated by this story of a man that was living rough on Hampstead’s world famous Heath. Bernstein was attracted to Festinger because he had a great ear for the dialogue and had empathy with the two, radically different, lead characters.

Rob Festinger received an Academy Award® nomination for Best Adapted Screenplay for In The Bedroom along with director Todd Field, as well as Best Screenplay from the National Board of Review.

Last year, Rob wrote and directed the comedy short, The Procession featuring Lily Tomlin, Jesse Tyler Ferguson and Lucy Punch, which was released in theatres worldwide as part of the Shorts HD Stars in Shorts program.

He is currently writing But Now It Appears for Sky Playhouse (which he will direct); the dramedy and Rachel Sherman’s Living Room for Glee producer Mike Novick.
Previous writing credits include October Squall for Fox Searchlight Pictures and Halle Berry; Kings County for Warner Bros and Bodysnatchers for the BBC.

“The challenge is making sure the characters stayed authentic, they stayed real,” explains Festinger. He continues, “This is a guy who has unique struggles in one way, but universal in another. He’s living out there in the Heath in a very, kind of primitive existence, and you want to find a way to make that something where the audience can both be fascinated and relate to at the same time. You want to keep the balance of comedy and drama and conflict.”

Director Joel Hopkins was born in London before moving to the USA where he attended the internationally renowned Tisch School of the Arts in New York. While attending University, he made his first short film, Jorge, for which he received the Wasserman Award. With the prize money he received, he went on to make his first feature-length film, Jump Tomorrow.
He is best-known for his film Last Chance Harvey starring Emma Thompson and Dustin Hoffman. His second feature film, The Love Punch also starred Emma Thompson, who this time starred opposite Pierce Brosnan, and debuted at the Toronto International Film Festival.
Joel has received several accolades for his work including the Carl Foreman Award for the Most Promising Newcomer from BAFTA, and was nominated for two British Independent Film Awards.

For Festinger, this was a perfect match, feeling that they were both “cut from the same cloth”. Hopkins was attracted to the project for several reasons. Firstly, because he grew up in Hampstead, which meant he had an affinity for the area.

While he grew up in Hampstead, it was the central characters that gripped Hopkins. “They’re both fringe characters, living on the outskirts of their respective societies,” says Hopkins. He goes on to explain, “Donald’s gone off the grid so to speak. Emily, she’s an American living in London, so she doesn’t fit in, she is recently widowed, she’s got a group of friends that she doesn’t feel very connected to, part of. So, she’s also an outsider, so it’s a story of two outsiders that come together through an event and discover something in each other. For me, that is the heart of the story.”

“they are very different types of actors and very different sort of types of people in a way and I think that’s what’s so fun about this story, is, they are really the odd couple,” explains Hopkins, who was aware that the success of the film lay in part with the on-screen chemistry of the two leads, but knew that these two screen actors come with two very different approaches. “Brendan’s very precise; he likes to work things out, really likes to know exactly what he is doing, he’s very engaged. Diane is more loose and likes to see where the scenes go, so it’s been fun marrying those two styles together in the process. And so far, touch wood, it’s been successful.”

Festinger, who was on set for the shoot, agrees with Hopkins that it is the way these two actors approach the filming process differently that fed into the feel of the overall story.

“Brendan approached the character in an almost Shakespearian role kind of way. He adds such gravitas and he’s a big bear of an actor that eats into the script”.

Keaton, Festinger noted, used her background in comedy to bring out the lighter side of Emily. “[She is] capable of going so deep into the character and at the same time can turn in an instant into this wonderful lightness. You never know what you’re going to get in a wonderful way because she’s always so connected to the character. As a writer, you’re looking at this role that you’ve been with for a long time and seeing somebody like Diane suddenly elevate it to another level.”

This combination of varying styles in how they brought the characters to life generated tension needed to propel the drama and the comedy of the script as Festinger explains. “Coming together you see these two textures, these two worlds, collide and I think a lot of the tension in the film is, will these two worlds will be able to exist together? I think because you have two wonderful actors that are so capable of finding those roles in themselves that it works; it does work.”

Gleeson was immediately attracted to the role of Donald. “I remember reading it [the script] and thinking, when we came to the trial scene, that this is so unlikely it has to be true. You always know, I had to go then and enquire if it was based on truth which it was up to a point, in terms of the court case it certainly was,” begins Gleeson. He continues, “[I] became fascinated about what would lead someone to live that particular life and then the consequences. What I liked about it was that it wasn’t the end of the story, there was a further chapter. I guess the character and the circumstances.

With the knowledge that his character was in part based on a real life man, Gleeson wanted to wrestle with how to make this man, who has made such a radical life choice, relatable to an audience. “With this guy, I felt it was a choice. I felt there was a weakness he felt in his own character, which was that he’d run away from various situations in his life, but he’d found a way to make it work for him and he also found a way not to be a burden to other people or to himself, so in that case I was kind of envious of him.”

Of course, one of the core aspects of this film is the majestic setting. Hopkins sees Hampstead as another character in the film. “it’s always been a unique neighbourhood within London and it’s always had a sort of village feel within the big city.”

For him, the attraction of the Heath is that unlike the more polished Royal Parks such as Green and Regent’s Park is has an element of wildness to it. Gleeson, who in the film lives in a make-shift shack, also notes Hampstead’s individual character. “There are very few places like it where you basically have a nature reserve overlooking a vast capital city, and it’s being maintained as such for ordinary people. The wildlife whilst being husbanded has been allowed in the Heath, which is very unusual and people are very protective of that.”

With all the elements set, Hopkins and his team began crafting their story for the screen, bringing a lightness of touch to a tale of two radically different people living is a small, but extremely beautiful corner of London, showing that love can blossom in the most unlikely of circumstances.